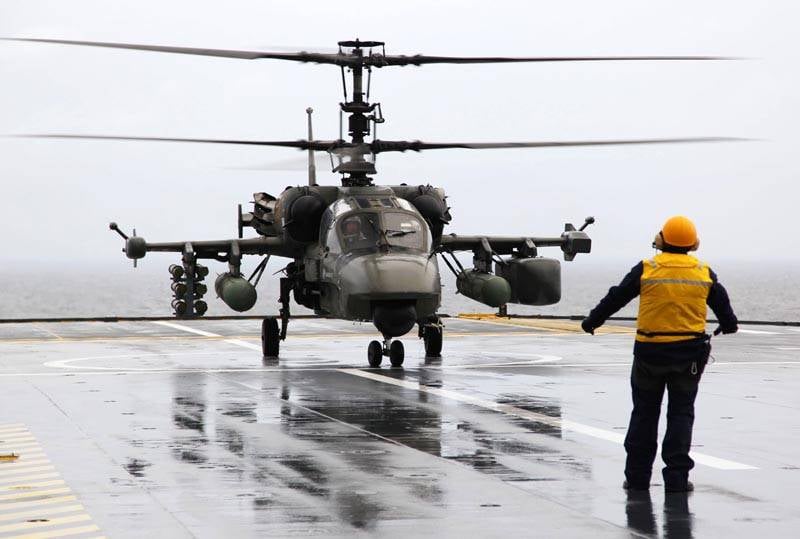 The Russian media reported that to the 75 anniversary of the Primorsky plant Progress, this enterprise was given a unique gift in the form of a large order for the production of Ka-52 helicopters, which have another name, Alligator, in the amount of 140 pieces. Today, there are just 12 units in the world. As the director of the World Trade Analysis Center reported earlier weapons (TSAMTO) Igor Korotchenko, the Ministry of Defense plans to purchase some 9 (!) Copies of the latest helicopter technology over the next 10-1000 years. Such a contract can be considered the largest for the whole history modern Russia.

The management of the Progress plant, located in the city of Arsenyev and belonging to the association Helicopters of Russia, believes that this promising work will have a very positive effect on the development of not only the plant itself, but also the economic potential of the whole of Primorye. Today, the situation at the enterprise is still far from ideal due to the instability of orders. However, the new contract will allow not only to return to the workplaces of many specialists who were forced to go on unpaid leave, but also to increase the number of full-time units of designers, assemblers and technical staff. Representatives of AAK Progress declare that the production base of the enterprise allows implementing such a large project. By the way, it should be noted that new helicopters will be produced not only for the needs of the domestic defense industry, but also for foreign armies. So, for the same 9-10 years, it is planned to deliver about 1150 screw machines of a new generation abroad.

Why is it that not only the Russian, but also other armies of the world are interested in purchasing such helicopters as the Alligator? There are several reasons for this. First, domestic development has undergone a significant upgrade compared with the previous version of the Ka-50 helicopter. Now on board the Ka-52 installed the latest means of navigation and targeting shells and missiles at the target. The helicopter can be controlled by two pilots thanks to a duplicated vehicle guidance system. The helicopter can strike at armored vehicles and enemy personnel on the ground with air-to-surface weapons. In addition, the "Alligator" can perfectly cope with the task of destroying low-speed air targets using the air-to-air complex. The Ka-52 is equipped with an integrative communications system, which allows crews of several helicopters to conduct coordinated actions to detect and destroy the enemy. The helicopter body is made of composite materials, which will give the Ka-52 structure durability.

Ka-52 replaced the previous modification of the helicopter series "Kamov" - "Black Shark". Despite the large list of advantages of the Alligator, most of which relate to the crew informatization system and the use of digital means of operation, this helicopter still has its drawbacks. The developers say that they are going to find a constructive solution in order to raise the statistical and dynamic “ceilings” that “fell” after weighting the car to 10,4 tons. In addition, engineers will have to solve the problem of improving flight performance, which also decreased compared to the Ka-50 version. However, representatives of the Progress plant do not consider these flaws fatal and are ready to eliminate them as soon as possible.

The combat helicopter went through a full cycle of State tests, on the basis of which the vehicle was given an extremely positive assessment. According to the pilots who participated in the “run-in” of the “Alligator”, the helicopter perfectly obeys the commands. Moreover, his Whirlwind long-range guns, Hermes-A all-weather ATGM and Chrysanthemum multi-purpose complexes make the car really frightening for any armored complexes on the ground.

In addition to the Ka-52, other helicopters should also come to the troops: these are heavy Mi-26Ts, training Ansat helicopters and combat Mi-28s. Do not forget to purchasers and reliable "osmushki" - transport Mi-8.

Let's hope that the contract for the supply of "Alligators" in the Russian Air Force will be implemented in full.
Ctrl Enter

We are in Yandex Zen
Russia moves to the production of its own matrix for the manufacture of thermal imagers
31 comment
Information
Dear reader, to leave comments on the publication, you must to register.