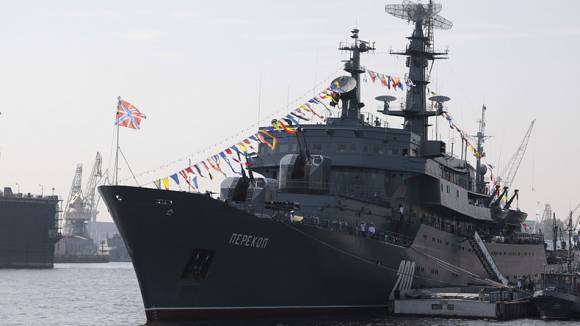 More recently, Russian shipyards and shipyards have raised the alarm that total underfunding by the state and "calm" on the sea of ​​orders are forcing many employees to look for more "bread" places to work. In this regard, many enterprises in this industry were either closed or sold privately to businessmen who converted them into factories for the production of cans, dishes and other things, far from the Russian fleet. Today, the situation with government orders has turned 180 degrees. So the management of enterprises received so many orders for the construction and repair of military and civilian vessels that they will be enough for the next ten years of the most intensive work. According to the new Russian tradition, in this case, factory managers suddenly grabbed their heads and announced that they were unlikely to be able to absorb such a large amount of resources due to a lack of qualified personnel and worn-out equipment. Here everything is like in a joke that our peasant is at least a drought bad, at least a big harvest. So officials of the Ministry of Defense pondered how to solve such a problem. And it seems that there is money, and even what money, and the desire to earn money from the people has not exhausted, but here is where to collect those people who can build and repair so many ships. And our admirals came up with the idea that it would be better if some ships were sent for repairs to Bulgaria. As they say, "abroad will help us."

It is worth a little stop at this very abroad. If someone perceives Bulgaria almost as a continuation of Russia, a fraternal state that is asleep and sees how to be closer friends with Moscow, then this is not quite so. Well, to be lexically accurate, it’s better to say: not at all. Bulgaria has long been a member of NATO. Its troops take part in various operations as part of the Allied shock groups of the Alliance. And if we talk about the deployment of missile defense in its territory, the Bulgarians are unlikely to refuse. It was in this country that military ships from Russia were sent for repair.

Here comes the following remark: is it possible later on to use these ships in battle if a potential enemy knows all their “cracks”, as sung in a famous song. The answer, I think, is understandable even to a schoolboy ... Everything is like how a hare that broke a leg resorts to treatment in a wolf's den. What can happen to him there is obvious to everyone. Of course, military officials say that these ships will not be involved in long hikes, and military officers will be trained for them. Like, well, let NATO know where we have the latrine, and where the galley ...

The Bulgarian ship repairmen, of course, repaired everything as it should be. Claims to present them meaningless. The main thing is that in this small country there were immediately found both qualified specialists and equipment, which in Russia was simply impossible to do.

The situation for an ordinary person looks just paradoxical. The huge state, which positions itself as a superpower, does not have ten thousand pairs of workers to realize the funds provided from the state budget. If so, then what kind of modernization, then we can even talk about. It is not clear what our factories are designed for then, if they are not able to “pay up” a couple of ships. Maybe they, too, go to the production of cans and lids - there is no need for seven spans on the forehead.

Many were still wondering why, they say, we buy several Mistrals from the French — we cannot build our own ships. As it turned out, not only can not, but do not want to. If there is money, then let NATO build everything for us ... You can even pay the Americans to stop considering us as a potential enemy. Why? - The idea, I think, is quite in the spirit of what is happening with our “defense industry” today. Either we lack money, either mind, or everything together. And in order to have enough of everything, you can buy everything from the Chinese: disposable corvettes, unsinkable plastic submarines - “maid in tea”.

Here you can really talk about the fact that the power is insulting ...

We are in Yandex Zen
New Russian shipyards
"Svetlana". History of creation
24 comments
Information
Dear reader, to leave comments on the publication, you must to register.