About "freedom" and "liberators" on the example of Libya

3 September 2011
22
The Libyan people, dropping the “bloody tyranny” of Muammar Gaddafi, can now determine their own fate and independently manage all the natural resources of their land. Oppositionists are “free” as they dreamed. What do they do by taking advantage of the fall of "tyranny"? Restore the neo-colonial order! 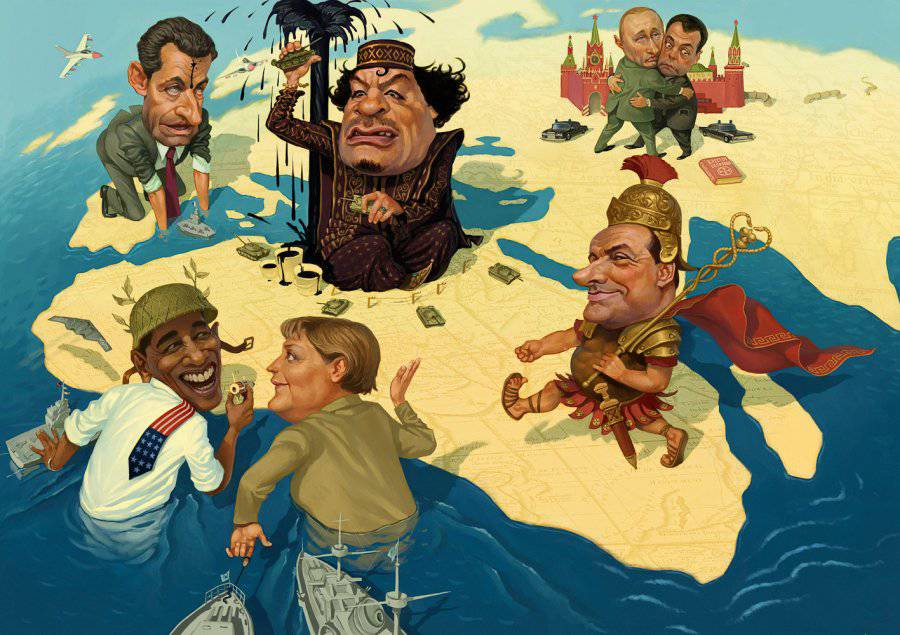 Paris and the Libyan rebels signed an agreement that guarantees France 35 a share in the state’s oil industry in exchange for official recognition of the Libyan National Transitional Council (PNS). This was reported today by Reuters, citing the press of the French Republic (FR).

According to world media reports, the Transitional National Council sent the Sheikh of Qatar (this country was an intermediary between the FR and Benghazi rebels) to 3 on April in which it was reported that the PNS and Paris had reached an agreement to transfer control over more than a third Libyan oil industry to the French exchange for the “full and continued support” of the rebels.

It was Paris 10 in March that the first of the Western states officially recognized the rebel PNS as the “sole legal representative of the Libyan people”.

In turn, the head of the Ministry of Foreign Affairs of the Federal Republic of Germany, Alain Juppe, said in an interview with the radio station RTL that he did not know anything about the agreements reached and had not heard of them. “The only thing I know is that the National Transitional Council (PNS), regarding the issue of restoring the state, intends to conclude contracts with parties that have previously supported it. In my opinion, this is quite logical, ”continued the French Foreign Minister. Western diplomats and politicians lie - a common thing, they live in a world of "double standards". So, the whole world saw that high-level professionals took by storm the capital of Libya, but we are still being told about “heroic rebels”.

The French Republic also received UN approval to unblock 1,5 billion euros from the financial assets of the leader of Jamahiriya Muammar Gaddafi and transfer them to the PNS opposition members already recognized by the world community. The request was sent to the United Nations the day before. Total assets of banks XFUMX FD billion euros owned by Libya. According to Alain Juppe, France must help the PNS, since the Libyan state is destroyed, there is a difficult humanitarian situation, people live without electricity, fuel, lack of water supply. This is another vivid example of the "double standards" of the Westerners - as if they did not destroy the Libyan state and deprive people of normal life. Apparently, Gaddafi is to blame for unleashing this war, or have the aliens started a war?

At the same time, world leaders met in Paris in order to discuss how to “equip” Libya. The conference was called symbolically “Friends of Libya”! “Friends” are good, at first they rolled out an independent state under a nut, overthrew the legitimate government, and now they will “equip” it. By the way, France is already well settled - 35% of the oil sector in Libya!

Yes, it is beautiful to be a "Free Country"; but first this “Freedom” must be conquered. It seems that the same “liberators” will quickly be found in Russia, or rather have already been found. And what do they offer behind the scenes to the West for help in “liberation”? Apparently, “unfairly captured Siberia”, the Russian North, Kaliningrad, the Kuriles, Sakhalin ?!

We are in Yandex Zen
Judgment in Tripoli. Saif al-Islam Gaddafi sentenced to death
Libya: after Gaddafi
22 comments
Information
Dear reader, to leave comments on the publication, you must to register.