The beginning of the "thaw". The first foreign policy "success" of Khrushchev 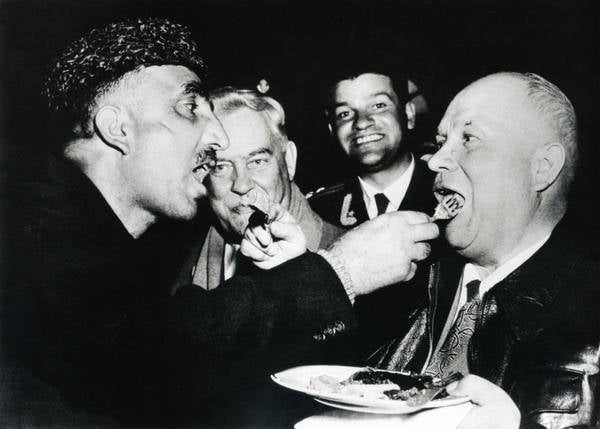 Interestingly, the term “thaw” itself was introduced into use when, in reality, no “thaw” still smelled. The word launched by Ilya Ehrenburg - the author, very peculiar. During the years of the Spanish Civil War, he glorified "internationalism", then - angrily denounced fascism. He has been abroad a lot, participated in the work of the Jewish Anti-Fascist Committee (EAC), but did not get under repression when the EAC was disbanded and its leaders were arrested. He was one of the creators of the "personality cult of Stalin", but very quickly changed his orientation, as early as 1953, his novella "The Thaw" appeared in Novy Mir.


This word was immediately picked up, the idea was developed. The real “thaw” began not in the political or cultural sphere, but in the material one. The new rulers sought the support of the people. Several emergency measures were taken: in August 1953, the allocation of large funds for the production of consumer goods, they sharply reduced prices. True, the depreciation of goods immediately led to their shortage - it was necessary to revise plans, the growth rates for consumer goods were doubled. For the first time in the USSR, their production was to overtake the production of means of production.

In September, 1953, at the plenary session of the Central Committee, N. Khrushchev reported on the plight of the village. He insisted on increasing purchase prices: for meat in 5,5 times, for butter and milk in 2 times, for grain by 50%. Mandatory deliveries were reduced, all collective farm debts were written off, taxes on household plots and the sale of products by villagers to markets were reduced. These measures really improved the situation of the villagers, the incomes of the peasants grew.

For the further development of agriculture and an increase in the amount of grain that can be sold on the border, in February 1954, Khrushchev put forward an ambitious plan for the development of virgin lands. In June, 1954, during a trade union congress, Khrushchev and his supporters attacked the leaders of trade unions, who allegedly did not defend "the rights of workers." They began to increase wages, reduce the duration of the working day and the working week, retirement benefits were streamlined (although pensions were introduced for collective farmers only in 1965 year).

Between 1953 and 1956, some religious indulgences were introduced. They allowed to open several Orthodox churches, mosques, prayer houses of Old Believers and Protestants, at the same time they built a synagogue in Birobidzhan (the administrative center of the Jewish Autonomous Region).

Began to carry out a large-scale housing construction program. It was a sore point - industrialization caused a large influx of people into the cities, and the war left 25 a million people homeless. People lived in barracks, poluzemlyanki, barracks-type hostels. Khrushchev put forward the task of “building more, faster, cheaper” - using block designs, simplified 4-5 floor houses projects. So from the second half of the 50's, the “Khrushchev” quarters began to grow, while people were happy to receive such housing (for free).

Khrushchev actively used populist methods: driving around the country “easily” met with peasants, workers, spoke to him “in a simple way”, could even screw the scabrous word, treat himself to the people. But the main support was made by the middle level party functionaries - those “appanage princes” whom Stalin “crushed”. They achieved a high position in the regions, regions, republics and wanted to preserve it, use it, be confident in safety and reap the fruits corresponding to their situation. And Khrushchev gave them the opportunity. He demanded only loyalty to his policy.

They transformed the old punitive system: the MGB became the State Security Committee (KGB) under the Council of Ministers. There was a new change of personnel. In September 1953, the Supreme Council opened the door to revising the decisions of the former OGPU, NKVD colleges, the abolished “special meeting” under the NKVD-MGB-MIA. True, the destruction of the Gulag system, which Beria began, almost stopped. Revisions went on for a very long time, until the autumn of 1955, only 16 thousand people were released. In the camps due to the declared and frozen amnesties began unrest. In 1954, there was an uprising in Kingira, up to 700 people died, in 1955, there was an uprising in Vorkuta.

Some major political affairs were reviewed; under the pressure of Zhukov, the military leaders repressed in the post-war years were reinstated. Convicted in the "Leningrad case" rehabilitated. In 1954, the former ministers of state security Abakumov and Merkulov were convicted and shot.

Khrushchev gradually cleared the way to full power. Malenkov, having betrayed Beria, actually deprived himself and support. Came and his turn to give way to the powerful Olympus. After all, Malenkov was the initiator of the “Leningrad affair”. However, he was not “punished”, as Abakumov, the question was solved “peacefully”. They did not recall the involvement of Malenkov in the repressions, accusing him only of an erroneous course in agriculture, in the “right deviation”. As a result, he was removed from his post as chairman of the Council of Ministers, although he was left in the Presidium of the Central Committee. The military again supported this “microturn”. Bulganin became head of the government, Zhukov received the post of Minister of Defense.

In the fall of 1954, Khrushchev went to Beijing with Mikoyan and Bulganin. He ceded all Soviet rights in Manchuria, Port Arthur, Dalny. And he gave without concessions from China. Stalin was also going to cede all rights in these territories, but only with the linking of further policies of Mao Zedong, with the creation of joint Soviet-Chinese enterprises. Now the USSR was losing everything — the Russian-built bases, railways, and other infrastructure. All joint ventures already established have been transferred to Beijing’s sole ownership. Provided new loans.

Relations with the West were still tense. True, in 1953, it was possible to establish peace on the Korean Peninsula. But, to resolve controversial issues in Europe could not. When the USSR offered to join NATO, which the Westerners advertised as an alliance of a “defensive nature”, and to create a collective security system in Europe with the participation of the United States, Moscow was refused. The West created new anti-Soviet blocs: in 1954, SEATO (Treaty Organization of Southeast Asia), in 1955, in CENTO (Central Treaty Organization). In the North Atlantic Alliance, Germany joined the North Atlantic Alliance.

The USSR responded by creating the Warsaw Treaty Organization (ATS) in 1955. Simultaneously with the signing of this treaty, without much ado, 15 in May, Moscow signed an agreement on the withdrawal of troops from Austria without concessions on their part, even without promises. In fact, Moscow unilaterally surrendered the most important strategic bridgehead in the center of Europe. Moreover, the Austrians themselves were quite neutral with respect to our garrisons, and, unlike the Hungarians, they did not arrange provocations and demonstrations. In fact, as in the area of ​​relations with China, Khrushchev betrayed the strategic interests of the peoples of the USSR.

Immediately followed by the next "initiative" - ​​at the end of May 1955, Khrushchev, Mikoyan, Bulganin visited Yugoslavia. Restored "friendship", apologizing unilaterally. The blame for the rupture of relations laid only on the USSR. In addition, they conceded on all other issues, agreeing to the enormous economic assistance that isolated Yugoslavia greatly needed. In return, they received nothing but "priceless" assurances of "friendship" and "cooperation." Belgrade, as a result, retained the “special position”, without joining either the Department of Internal Affairs or the Council for Mutual Economic Assistance (CMEA).

All the Soviet proposals concerning collective security in Europe, about the “German issue” failed, although the media were presented to the USSR in these negotiations as successful. In September 1955, German Chancellor Adenauer visited Moscow. During his visit, the Soviet side recognized West Germany and established diplomatic relations with it; again unilaterally - without concessions from the West. So American and Western European diplomats did not even think of recognizing the GDR, or discuss Moscow’s proposal on the status of a “free city” for Berlin. In addition, the Soviet Union made another gesture of "goodwill" - all prisoners of war who were still in the USSR were released and returned to Germany.

At the same time, in the Soviet state, those who sat for cooperation with the occupiers, all kinds of policemen, burgomasters, elders, "Vlasovists", punishers, etc., received freedom.

In October 1955, Khrushchev made visits to India, Burma, Afghanistan. These states were not part of the socialist system, they were not and did not become allies of the USSR. But they were also given large loans, they had considerable help - economic, financial, technological, military, etc. For example, Moscow allocated 135 million dollars only for the construction of one metallurgical complex in India. In fact, it was established that if a country maintains neutrality in a world where two systems are opposed, it will receive great help from the USSR. A kind of freebie, because in the end, few people returned the investment. It was a huge burden on the finances, economy, and welfare of the peoples of the USSR. After all, the money spent could be wisely invested in the development of the Union itself.

It is clear that all these strategic mistakes were determined not only by Khrushchev’s stupidity or his “peacefulness”. Apparently he was sent, prompted. Thus, Mikoyan was a participant in almost all foreign policy actions, another of the “agents of influence” could be Khrushchev’s son-in-law Adjubei. He was the chief editor of Izvestia.

Foreign policy actions were also a very convenient tool for strengthening the authority of Khrushchev and the struggle against possible adversaries. Molotov, who cannot be denied a diplomatic mind, was against the treaty with Austria and reconciliation with Yugoslavia (at our expense). As a result, his resistance was broken, forced to repent. The positions of Kaganovich were also weakened. Abroad at that time, Khrushchev was praised as a “wise and progressive” politician, just like Gorbachev in the years of “perestroika”, when he gave in everything and everyone.

In the USSR, Khrushchev’s authority was not great, even after Beria’s death. He was just “one of many”; the same Molotov respected more. Therefore, Nikita Sergeevich’s world tours and the recognition of his “merits” by foreign politicians and the media created an image of “leader” around him.

We are in Yandex Zen
Myths of the Great Patriotic. Did Stalin have prostration in the first days of the war?
Women who defeated fascism
13 comments
Information
Dear reader, to leave comments on the publication, you must to register.