December 23 2014
13
India intends to develop its submarine fleet, including through cooperation with Russia. Recently it became known that the Indian Navy is considering the issue of leasing a second nuclear submarine of Russian production. Currently, the Indian fleet is operating the INS Chakra submarine, built in Russia and previously bearing the name K-152 "Nerpa" (971 project "Pike-B"). A new submarine of the naval forces of India in the near future may become another “Pike-B” of Russian construction. 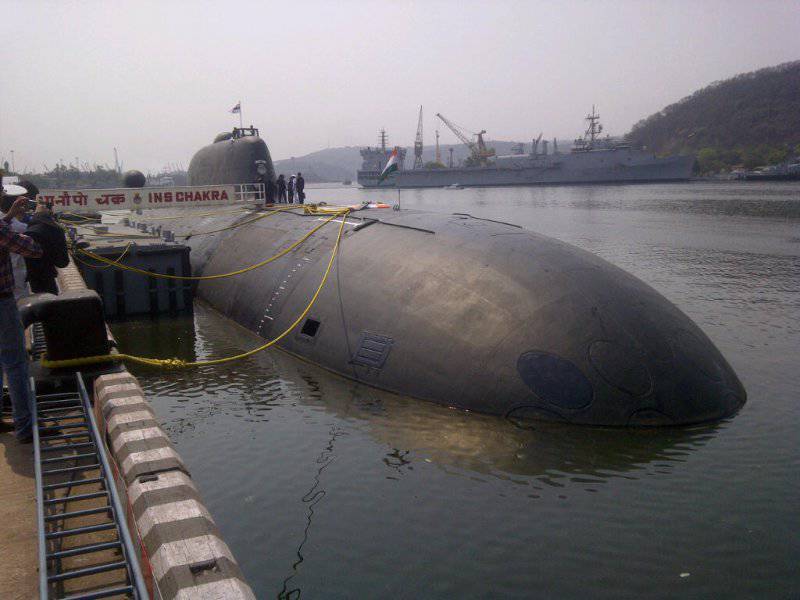 Last Tuesday, December 16, a press conference was held in New Delhi with the participation of Indian Defense Minister Manohar Parrikar. Among other things, the journalists asked the minister about plans regarding the purchase of new nuclear submarines. The appearance of this issue was associated with the recent visit of the Russian delegation headed by President Vladimir Putin. Representatives of the Indian press inquired whether the military department is planning to lease a new submarine of the same type as the already transferred Chakra.

M. Parrikar replied that India could indeed rent a second Russian-built nuclear submarine. Such a deal should have several positive consequences for the Indian Navy. First of all, the new submarine will significantly increase the combat potential fleet. Secondly, the submarine will be used to educate and train new specialists who will operate new types of nuclear submarines in the future.

Statements by Indian Minister of Defense Newsdiscussed in recent times. Currently, the Indian and Russian sides are in talks, the purpose of which is to replenish the combat strength of the Indian naval forces. We consider both the change in the rental conditions of the submarine INS Chakra, and the rental of the second Russian submarine.

The unfinished Irbis submarine of the 971 Pike-B project can become a new ship of the Indian Navy. The construction of this boat started in 1994, however, for financial reasons it was seriously delayed, and also stopped several times. In the spring of last year, information appeared about the possibility of signing a Russian-Indian agreement concerning an unfinished submarine. So, India offered to pay for the completion of construction, and then to rent a new submarine.

Since that time, new messages about the possible completion and rental of the submarine "Irbis" did not appear. As follows from the words of the Indian Minister of Defense, negotiations are continuing on a possible contract. When and how they are completed is not yet completely clear. The lease of the Nerpa / Chakra submarine may indicate that the parties agree and the Irbis submarine will indeed be completed, although not for the Russian Navy.

Currently, the Indian Navy has only one nuclear-powered submarine of Russian construction. The lease agreement for the Nerpa K-152 NPS was signed at the beginning of 2004. Initially, the transfer of the boat to the Indian fleet was planned for 2008 year, but later this date was repeatedly shifted, including due to the accident that occurred in November 2008.

In case of successful completion of the current negotiations, the Amur Plant will continue the construction of the Irbis boat. Given the state of the structures of this submarine, it may take several years to complete construction and subsequent tests. Thus, the new submarine will replenish the Indian Navy no earlier than 2016-17. Conditions for such a lease are not yet known. Perhaps the boat "Irbis", like the "Nerpa", will be transferred to 10 years. It should be recalled that in 2004, India intended to rent two submarines at once, however, for a number of reasons, the terms of the agreement were changed.

On the eve of a press conference with the participation of the Indian Minister of Defense, factory tests of the first submarine, built in India, were launched. December 15 submarine S73 Arihant departed from the quay wall of the shipyard in Visakhapatnam. The first release of the submarine at sea was observed by the leadership of the military department, the fleet command, as well as representatives of the NPCI nuclear power corporation and the BARC nuclear research center.

The development of the first Indian project of a nuclear submarine started in the mid-seventies and was carried out with the active participation of Soviet and then Russian specialists. Construction of the head submarine of the new project began in the second half of the nineties. The Arihant boat was launched in the summer of the 2009 of the year, but over the next few years it was completed and finished, as well as moored.

Sea trials of the head submarine of the new project are planned to be completed within the next one and a half years, although a serious change in these deadlines is possible. From the middle of 2011, a new submarine of the new type, named Aridhaman, is being built in Visakhapatnam. It was originally planned to build six submarines of a new type, but plans were halved. In the foreseeable future, the laying of the third boat should take place.

Indian-designed 6000 submarines with a tonnage must carry K12 medium-range missiles at 15. According to some information, in the future, K4 ballistic missiles with a range of about 3000 km can become weapons of the Arikhant type boats. The K4 project is currently at the design stage. In the future, the creation of a new missile weaponry with even higher characteristics is not excluded.

As we see, the Indian naval shipbuilding is currently implementing a project for the construction of strategic submarine missile carriers, but so far it cannot provide the naval forces with multipurpose nuclear submarines. For this reason, nuclear submarines capable of “hunting” for enemy ships are still supposed to be leased from Russia. One such submarine already serves in the Indian Navy, and the second can be transferred over the next few years.