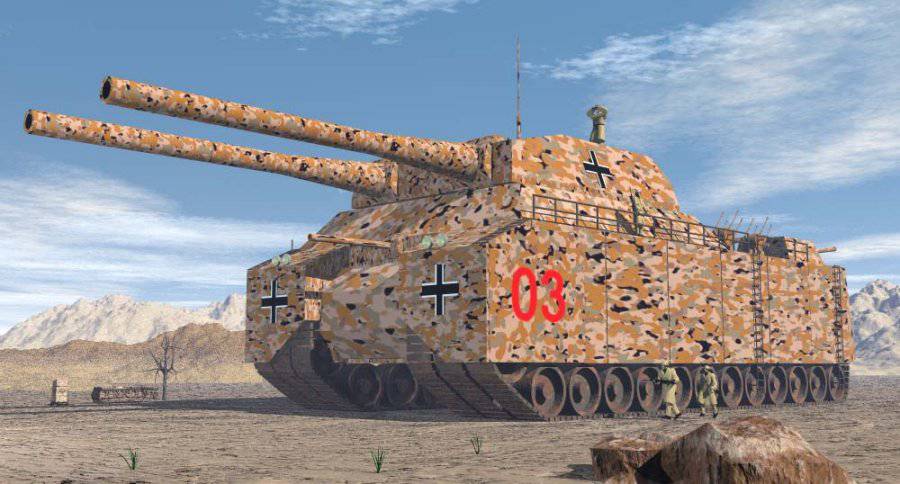 It has always been this way that the warring parties in the process of military actions pay attention to the enemy’s equipment, subsequently using the most interesting ideas for themselves when creating the equipment. An exception in this list was not Hitler’s Germany, at the time when World War II was on. Almost the exact replica of the tank of the Soviet army T-34 from the Germans was the tank "Panther". However, this does not mean that Germany did not have its own interesting solutions, which had no analogues at that time. They were based on ideas that were not previously used at all. Such innovations, without a doubt, can be called the projects of the largest tanks Landkreuzer P1000 Ratte and P1500 Monster, which could not be applied in practice.

23 June 1942, the German Ministry of Weapons, which was also responsible for the development of submarines, were proposed to the court of Adolf Hitler projects that include giant tanks, weighing 1000 and 1500 tons each. Hitler was a man approving all sorts of non-standard decisions concerning the field of weapons. For the engineering giant of Germany, he set a serious task, obliging to ensure the implementation of these projects. The first monster tank was supposed to be named Landkreuzer P1000 Ratte.

The approximate parameters of this tank should have been the following: the length of 35 meters, the width - 14 meters and the height - 11 meters. The movement of the monster was to be carried out using caterpillars whose width was 3.6 meters, they consisted of three sections, the width of the 1.2 meter. Having such a caterpillar width, the area of ​​interaction with the surface was ensured, which did not allow it to fall under its own weight.

The P1000 tank was controlled by a crew consisting of 20 people, and it had to be driven using two MAN V24Z12 / 32 44-cylinder engines with 8500 horsepower. In general, these engines were used in the production of submarines, and the tank they provided power, in the amount of which was 17000 horsepower. Then, after conducting various engineering calculations, it was proposed to replace the two above-mentioned engines with eight 20-cylinder engines, called Daimler-Benz MB501. They had horsepower each at 2000 and were used in the manufacture of torpedo boats.

Both versions provided the speed of the P1000 tank in 40-45 km / h, which is simply unbelievable for a machine of such impressive size.

The armament of the P1000 tank was based on two SK-C / 34 280 mm caliber guns on ships that were mounted on the main turret. The rear of the tank was equipped with an additional turret with one 128-mm gun. In order to be able to defend against air attacks, eight Flak20 X-mm anti-aircraft guns were installed, and the fire protection of this giant was provided by two heavy Mauser 38 / 151 guns.

The existence of the P1000 project was only on paper, but this did not prevent the developer to start creating the next project of the P1500 tank, which weighs in tons of 1500. Unlike the P100, whose armor thickness ranged from 150 mm to 220 mm, the armor of this exhibit was assumed to be from 250 mm to 360 mm. The P1500 tank was supposed to have one 800-mm gun, similar to the gun mounted on the Fat Gustav and Dora railway platforms. In addition, it was planned to equip the tank with two additional 150-mm guns and in a sufficiently large number of machine guns and anti-aircraft guns. The movement would be carried out with the help of four engines borrowed from submarines MAN V12Z32 / 44, which together have the power of 34000 horsepower.

But these models of tanks were never put into production, the reason for this was their impressive dimensions, the creation of which would significantly complicate the work of the entire engineering industry in Germany, which already worked at an accelerated pace. To produce such tanks, we needed competent specialists from different areas, and in large numbers. In addition, for the maintenance of these machines would also require people whose number was close to the average army unit.

These reasons were convincing enough for the German Ministry of Arms and at the beginning of 1943, an order was issued by Albert Speer, demanding that all work related to each of the projects be stopped. At that time, the work on the main turret for the P1000 tank was already completed. It was later installed on the Trondheim line in Norway.
Ctrl Enter
Noticed oshЫbku Highlight text and press. Ctrl + Enter
We are
The fire control devices of the Soviet and German tanks of the Second World War. Myths and RealityTank Panther - the grave-digger of the Third Reich?
10 comments
Information
Dear reader, to leave comments on the publication, you must to register.