2 September 2011
6
Almost a hundred years ago, by decree of the Military Council, a four-gun battery was built at Cape Kurona, on the western shore of Balaklava Bay, to protect Sevastopol. This southernmost outpost of the defensive line of the city was able to reach cruisers and battleships at a distance of 20 kilometers.


However, the battery actually did not fulfill its main task of fighting the enemy at sea. In the autumn of 1941, all four guns were turned towards the coast and the 6 months almost continuously worked on the units of the Wehrmacht advancing on Sevastopol.

The Germans could not take this battery, but they did not try to do so. The battery defenders completely stopped their resistance on 30 on June 1942, retreating along with the rest of the Red Army defending Sevastopol.

Only destroyed the battery in 2002 year. Cut out and removed all the metal, leaving the gaping concrete openings are not the troops of the Wehrmacht. This made our conscious citizens.
(19 total photos) 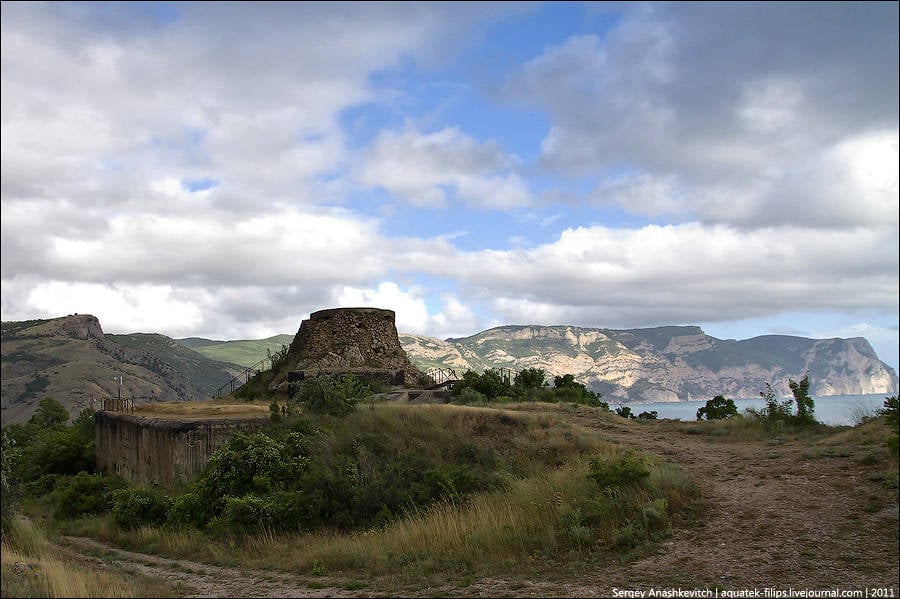 1. In the report I will talk about the heroic stories batteries during the Great Patriotic War and show what remains of it today. 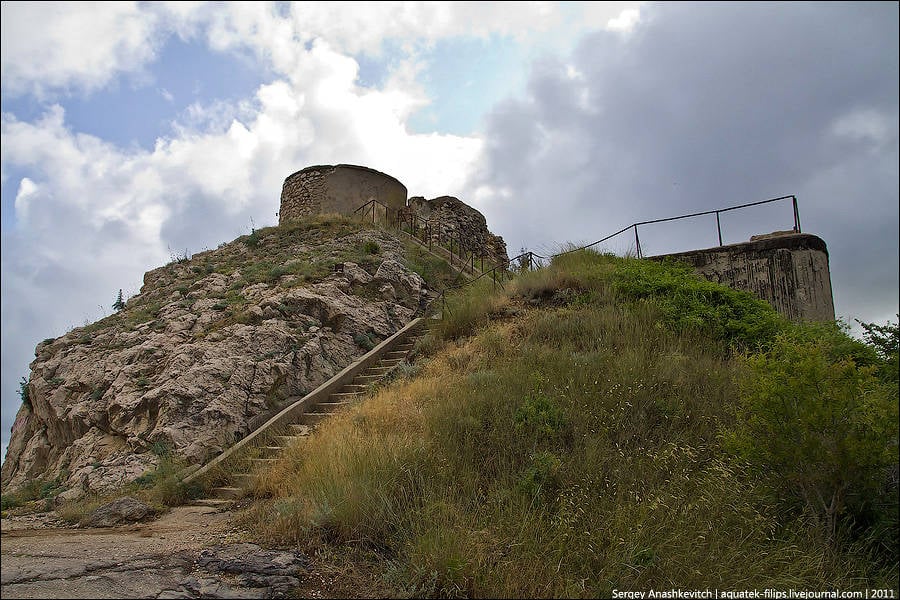 2. The construction of the battery began in 1913-1914, by order of the Military Council of 14 on April 1912, south-west of Balaklava Bay. The leader of the work was Colonel Petrov. By the arrival of Soviet power, the battery was ready for 75%. In Soviet times, it was completed and armed with 152 mm guns, removed from the decommissioned ships. Initially, the numbering of the battery was different - it was called the battery number XXUMX. 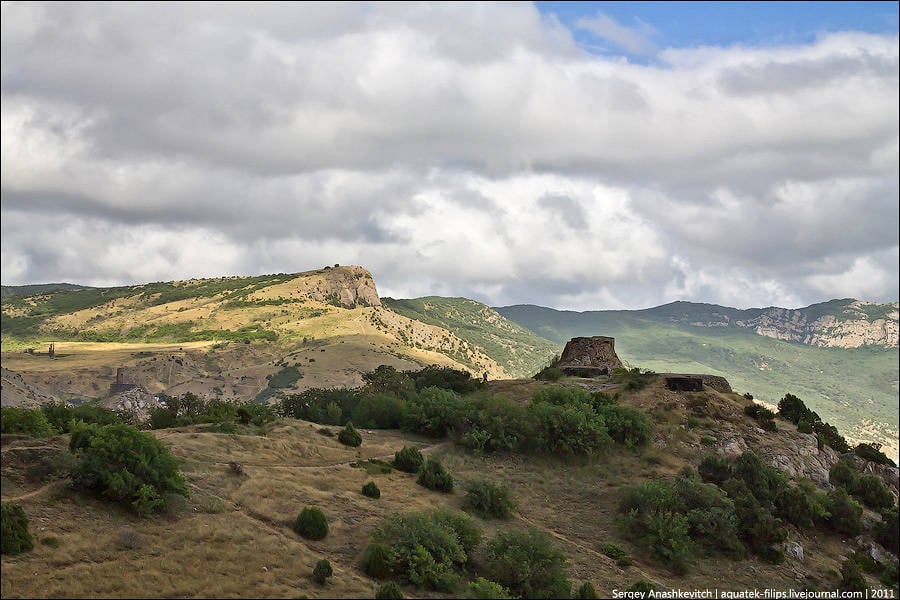 3. View of the battery from the cliff Mytilin. It is clearly seen how successful was the choice of its location - the shelling sector was an impressive angle, it is almost on the cliff, having only one spacious approach, which can be called a minus. It is the location of the battery that largely predetermined its inaccessibility during the defense of Sevastopol 1941-1942. 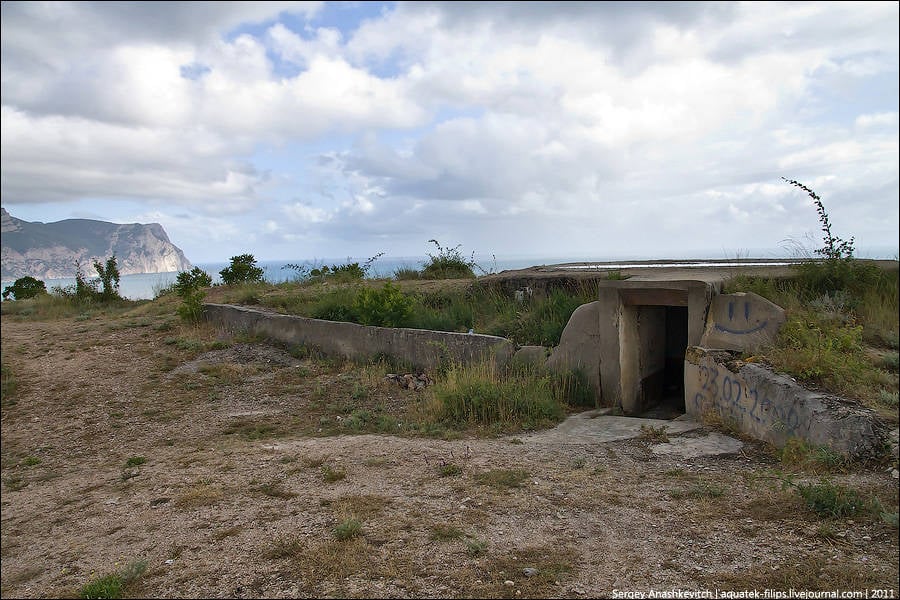 4. The battery, located on the mountain to the right of the exit from the Balaklava Bay, was installed on a concrete base and had an ammunition cellar and parapet covering the personnel and guns from enemy fire from the sea. 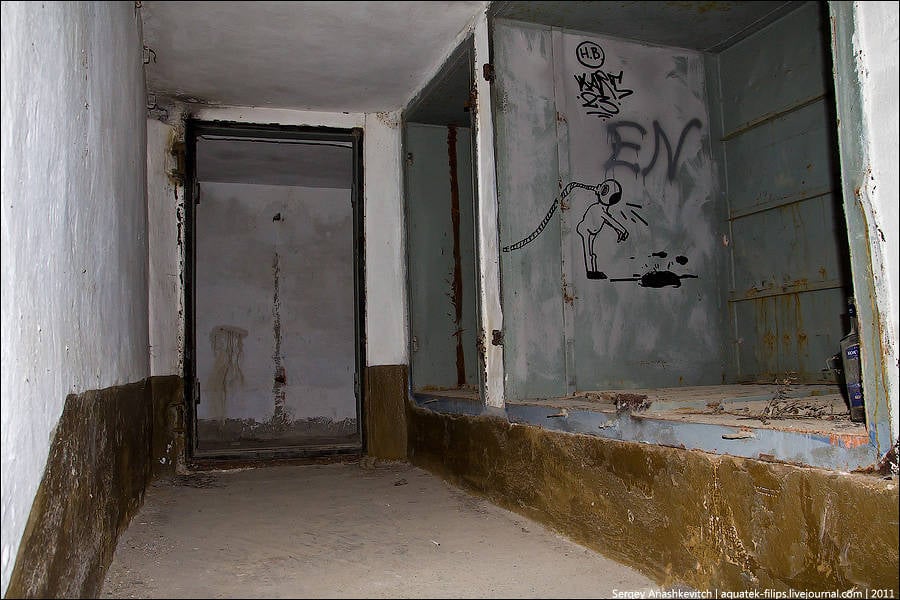 5. The parabolic part consists of casemate premises in which personnel, support facilities, etc. were located. Now teenagers like to frolic here and sleep bums 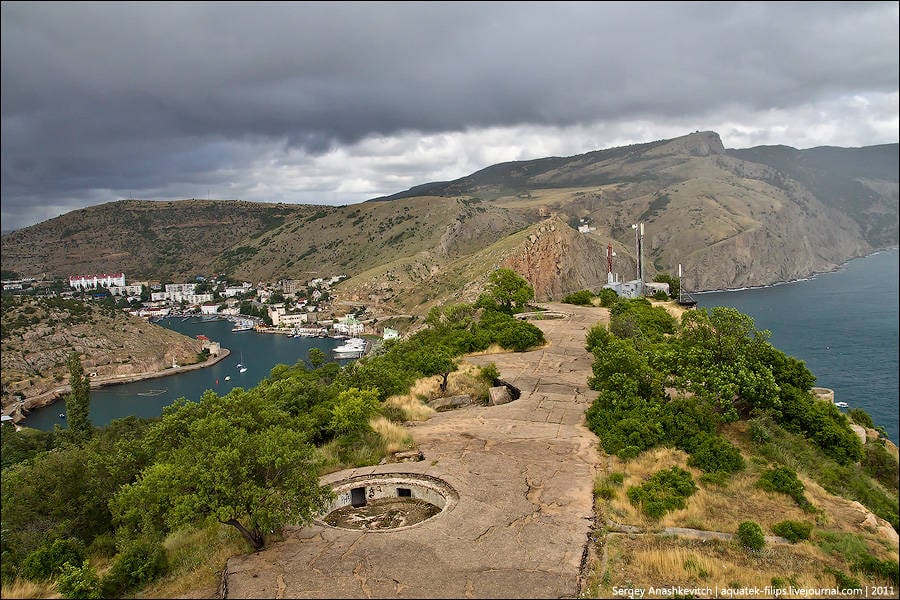 6. Above, I indicated that the battery was a four-gun. This refers to its pre-war history - before and during the war there were indeed four 152-mm guns, which were hardly located 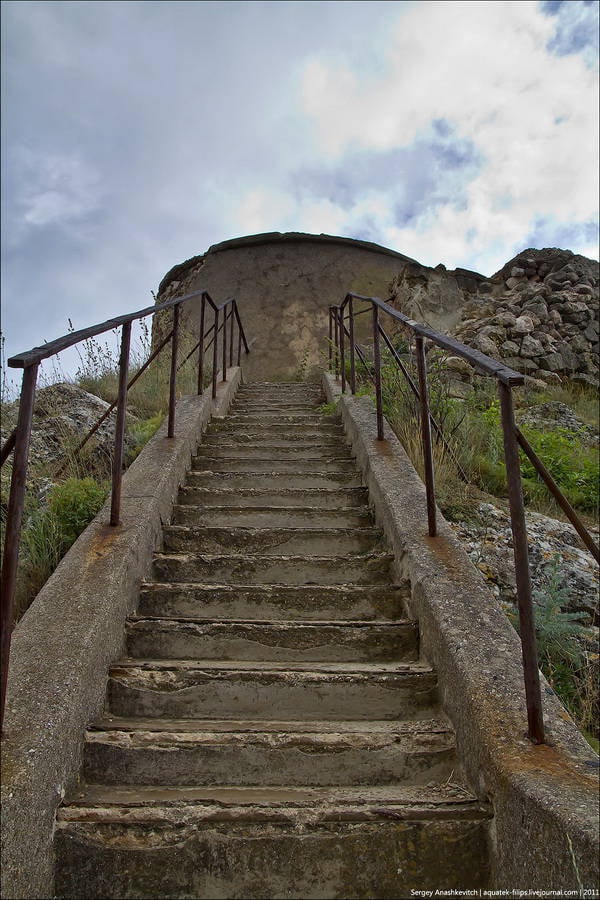 7. Even before the war, the battery was renamed 19, and its first commander was G. Alexander, later the commander of the legendary 30 battery. The commander of 19 during the war was captain M. S. Drapushko, military commissar - senior political instructor N. A. Kazakov. Namely Drapushko very often call this battery besides its number. Initially, the battery had a shelling of 130 degrees, with a rate of fire of up to 10 shots per minute. The layout of the battery is standard, except that its right-flank casemate is located higher up the slope and the sub-gallery has a bend and an additional ladder. 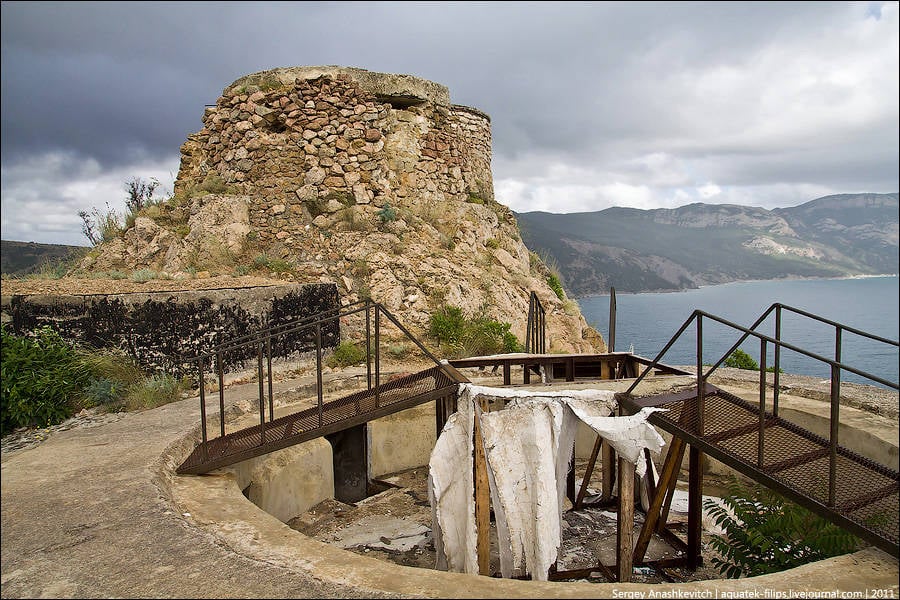 8. To the right of the cliff, we see two more gun positions - they are post-war construction. Although this statement is ambiguous. According to some data and memories, two naval guns in the 1942 year were installed behind a rock on temporary grounds. This is indirectly confirmed by the fact that on the casemates of Fort Yuzhny captured by German troops in November 1941, 6-inch projectiles are visible and if you draw the battery gunner's directrix, the Yuzhny fort does not fall into this sector (130 degrees). In addition, traces of a blown-up structure are clearly visible on German 1942 images. However, it was not possible to establish what these instruments were. Foundation of one of the later gun positions 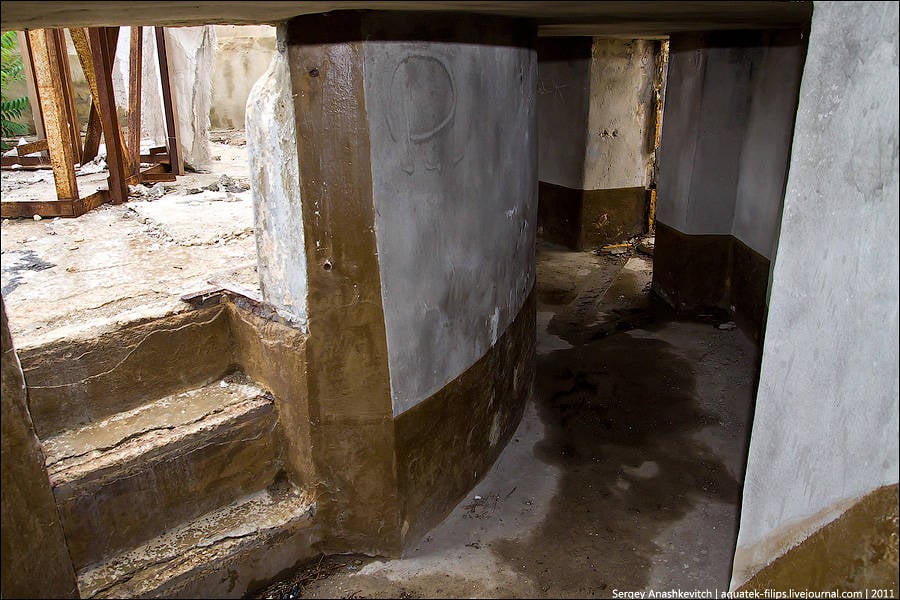 9. Modern gun positions have casemated servicing facilities at their base. They were intended for maintenance of the gun, as well as its loading / unloading during the battle. 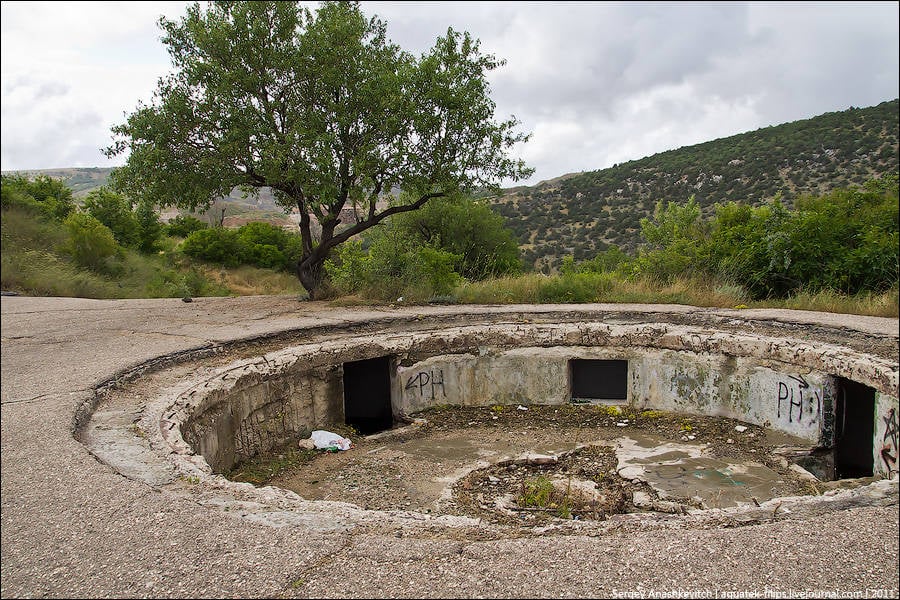 10. Under the casemates "main positions" 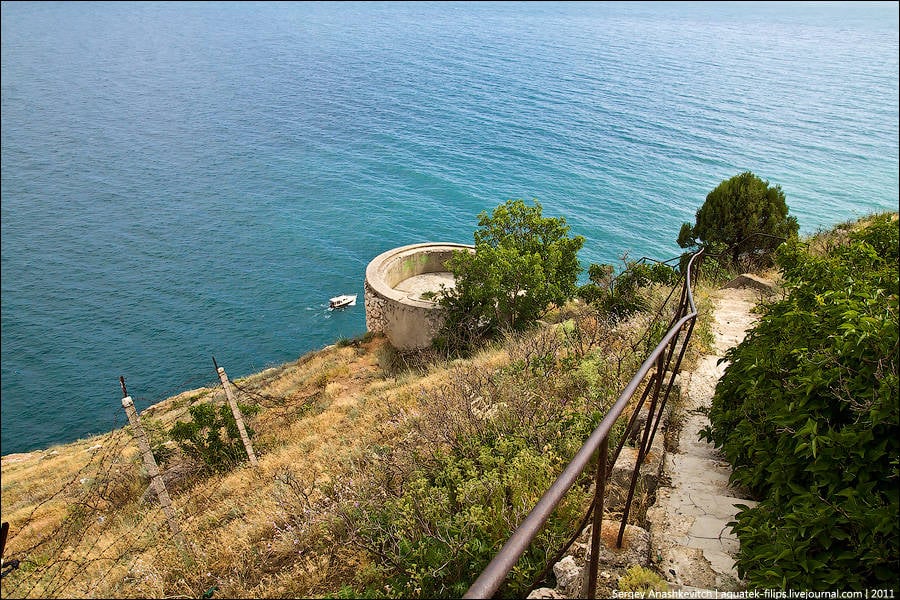 11. The battery was equipped with several observation points and a range finder. One of them is slightly lower down the slope and it is not very easy to go down to it, especially in wet weather. 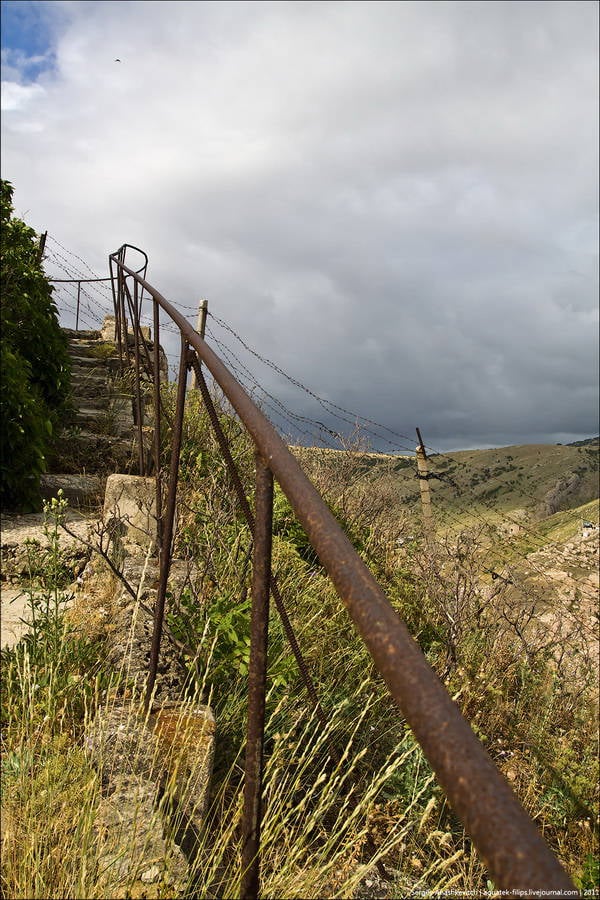 12. The railing and the thorn were metalist unnecessary 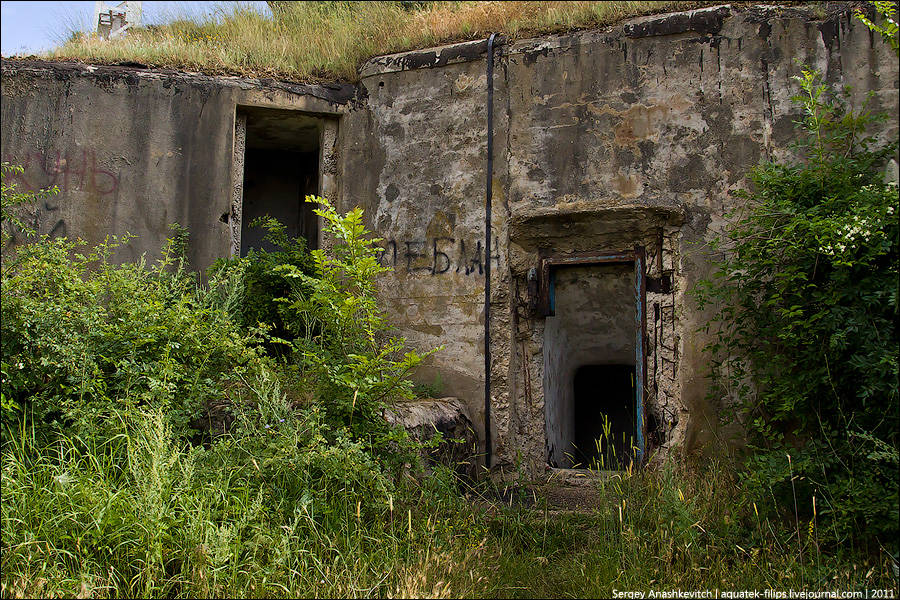 13. The entrance to the main casemates of the battery. A lot of space, inside is incredibly damp, cold and a lot of mold. Cut all that is possible. But because of the special dampness, the homeless do not live here, which means that there is no modern dirt 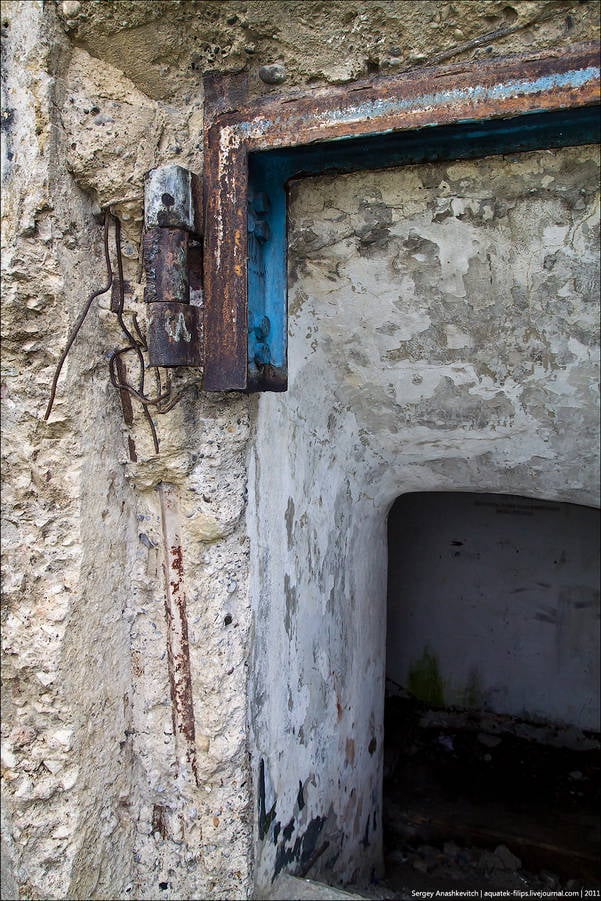 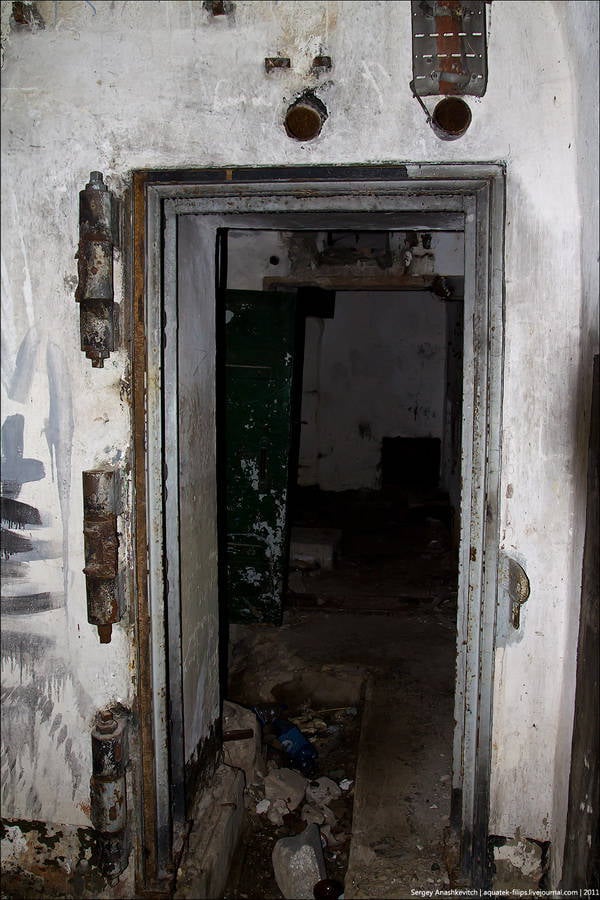 15. The entrance to one of the casemate rooms. There is still a little light here, allowing you to take pictures. 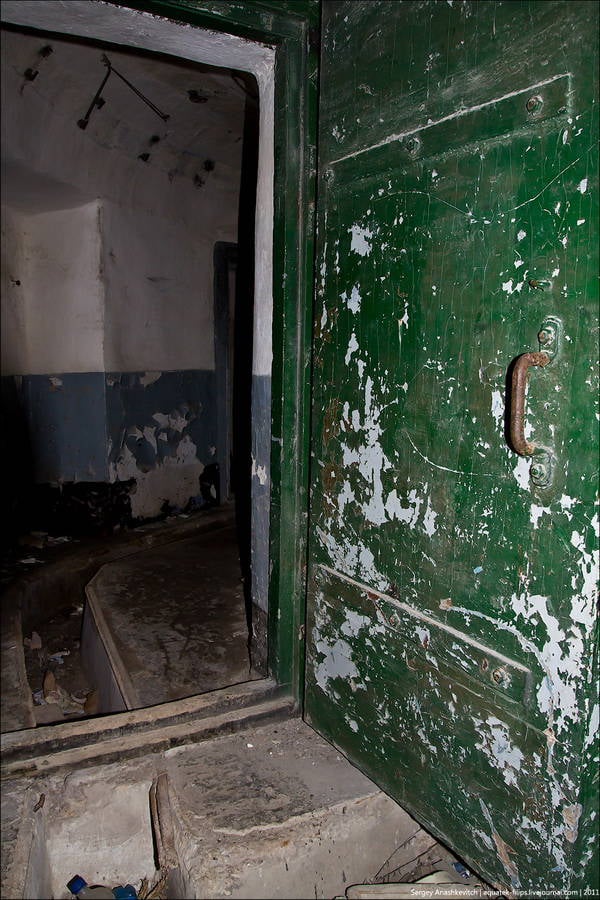 16. With every meter everything is cooler. Behind the door to the right begins full darkness. 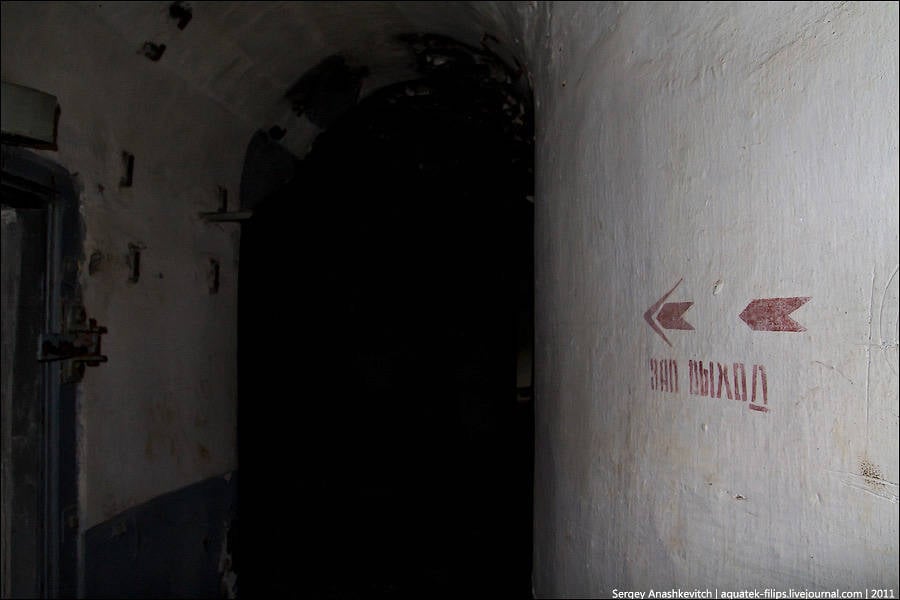 17. Photos can be done with the tenth time. The camera point-blank refuses to focus, so further only manual focusing. 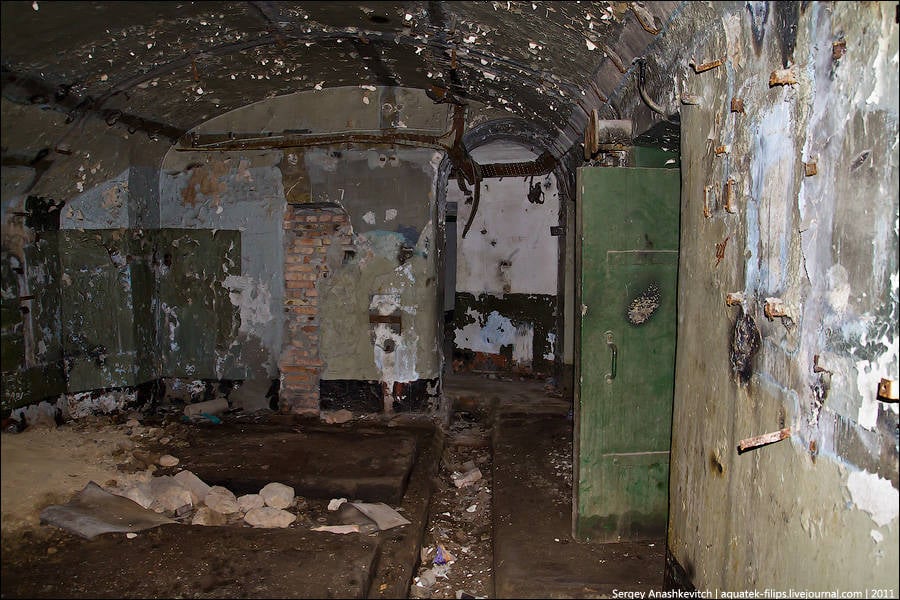 18. Everything, here already pitch darkness. I didn’t take a flashlight, so I illuminate with a flash of my 50, in the intervals of light I manually focus and at random I shoot with a flash. Something turned out 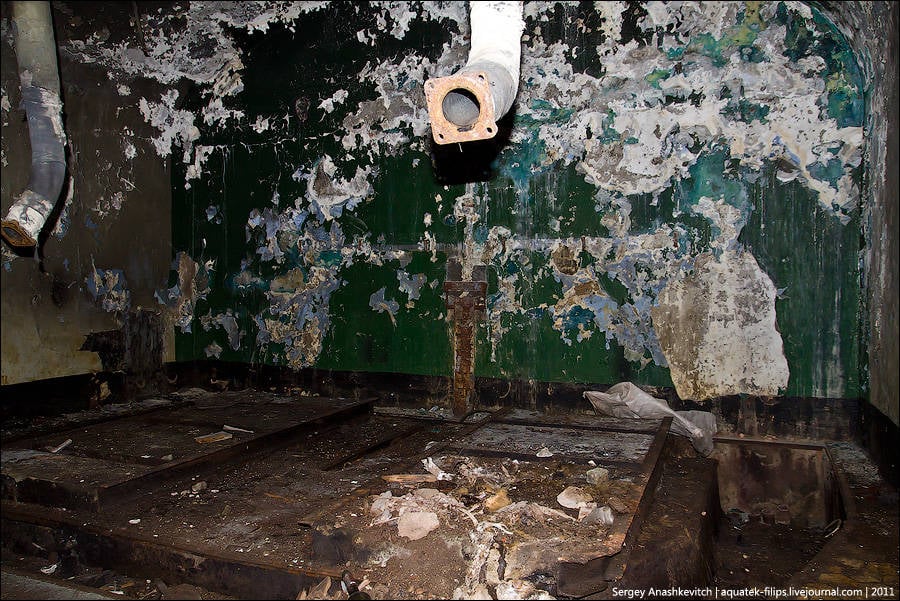 19. Diesel Generator I almost killed the pipe sticking out of the ceiling 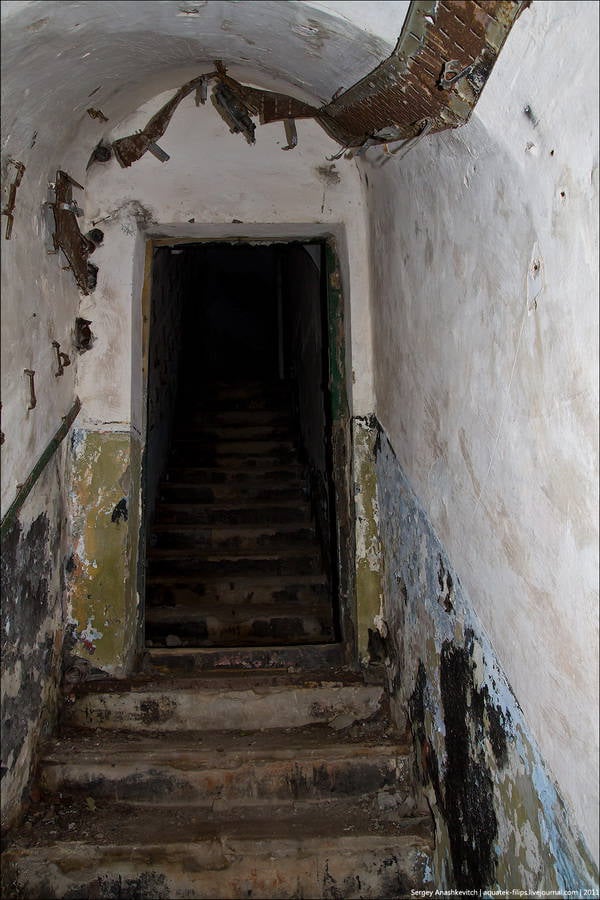 20. Stairway to the top. There is light 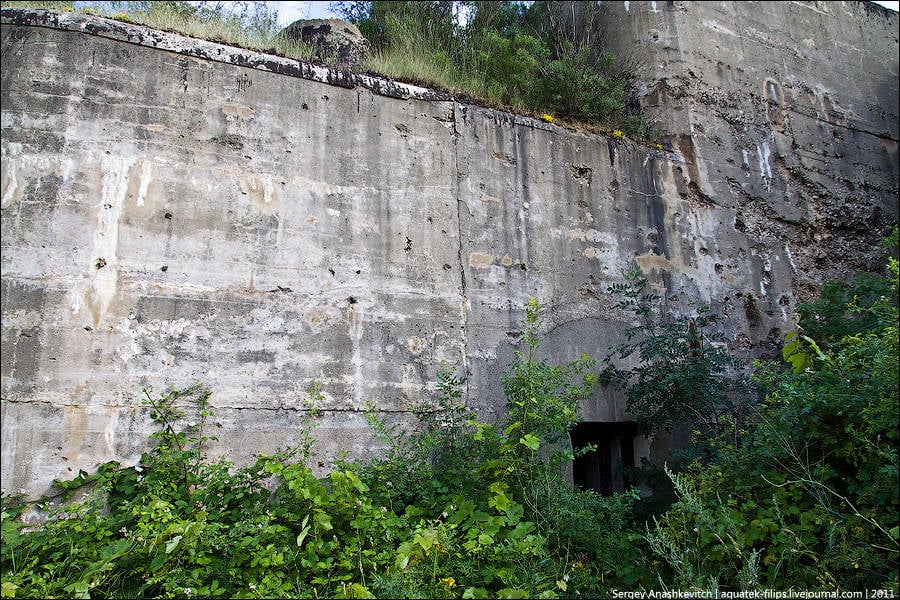 21. Finally got out. There, behind these walls I walked 10 minutes ago 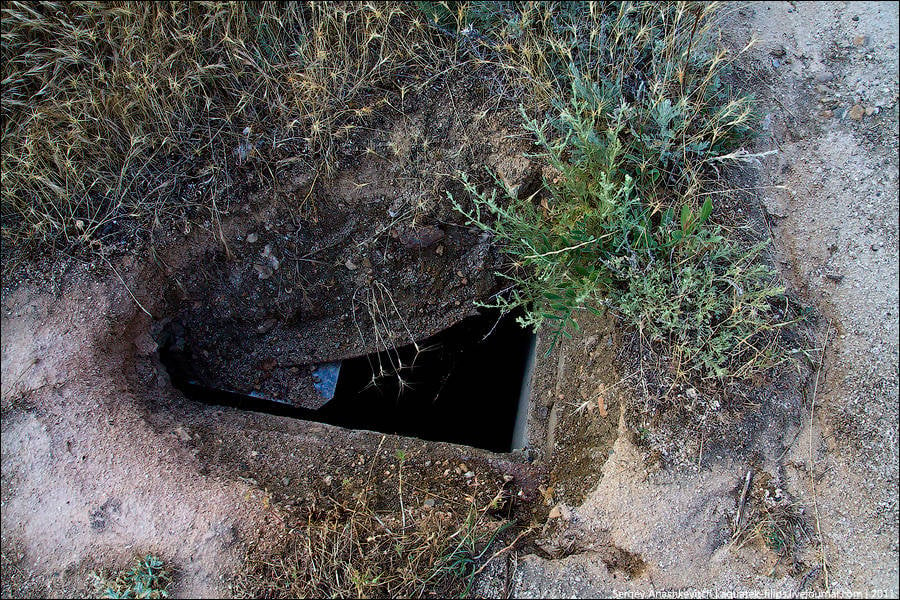 22. There, in the casemates, in one place far above, a point of light flashed. Apparently this gap was its source 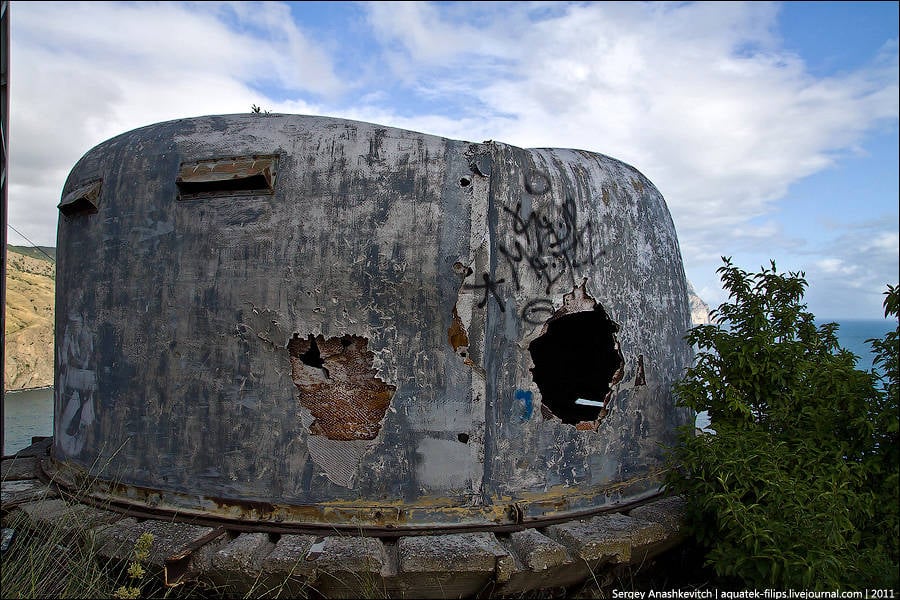 23. Radio-transparent gun locator cap. Appeared with the B-13 guns when rebuilding the battery after the war. 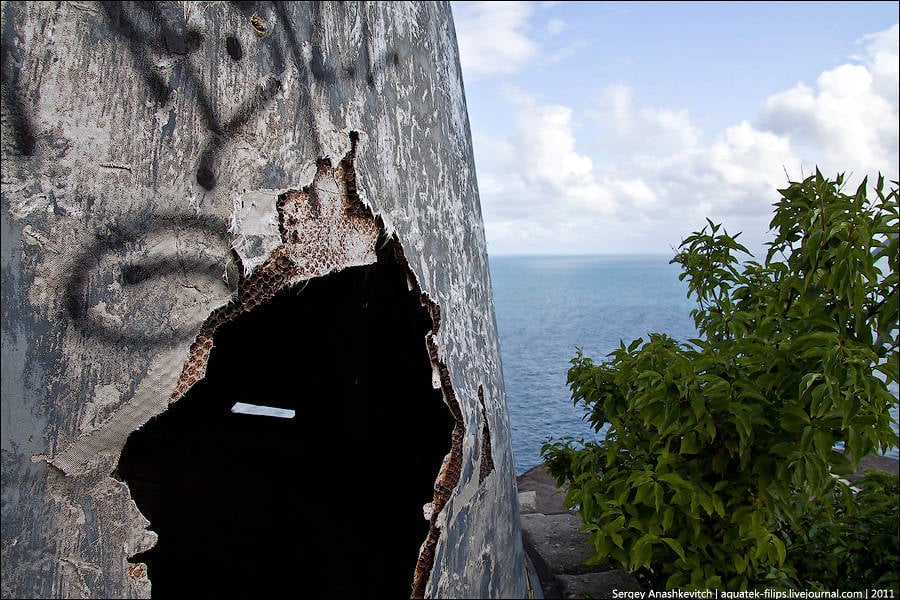 24. Its walls are made of a material similar to fiberglass. Apparently she appeared here at the very end of battery life. By the way, after the war, the battery was restored and served as a guard for the Black Sea naval base Fleet. And in 1999, it was prepared for decommissioning. What happened next is characteristic of our time. 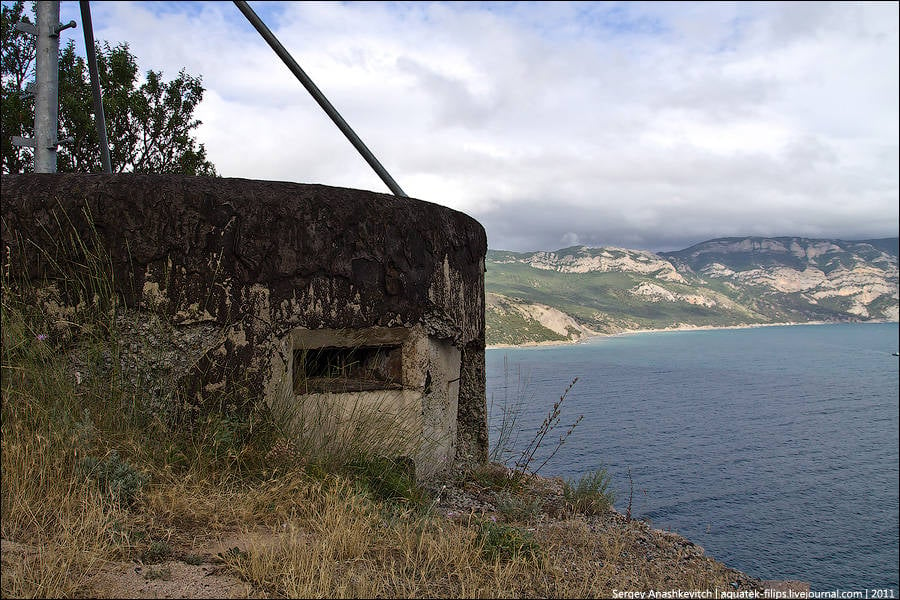 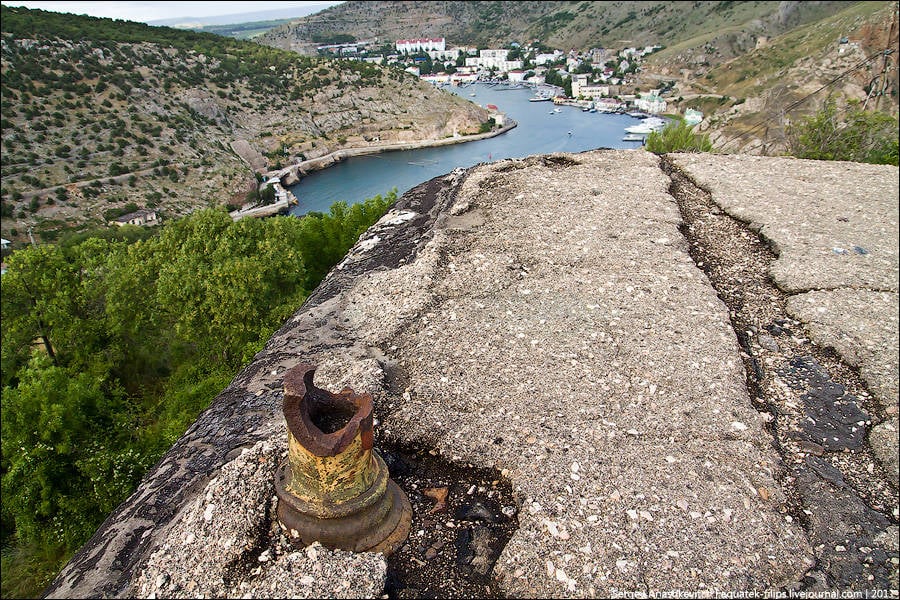 26. Remains of metal, torn from the meat, on the gun platform
At the end of the report I would like to return to the heroic history of the battery during the Great Patriotic War.
In the fall of 1941, the defense of Sevastopol began. November 6 thundered the first volleys of the nineteenth battery, commanded by Captain MSDrapushko. The first positions of the battery guns were the positions of the German troops near the village of Shuli (Ternovka), where the second regiment of the Marine Corps of the Red Army held the defense.
On November 13, the Nazis occupied the heights dominating Balaclava, right up to Mount Spilia and the Genoese fortress. Six-inch battery guns from the positions of the Germans separated the distance of a thousand meters. The coast defense command took full advantage of the battery’s ability to strike at the enemy’s rear. The captured Germans spoke with horror about the nightmare in Alsou, where two Wehrmacht battalions were destroyed by battery fire. To fight the battery, heavy guns and mortars were pulled up. The stormtroopers attacked her with a hail of bombs. The duel continued until November 21.
Each tool has a calculation of 12 people. On the hands of the cellars served pood charges, 52-kilogram shells. High rate of fire advantage of naval guns over field. But live people provided the shooting regime. They worked at the limit and even beyond the power.
The guns of the battery did not have armored caps, nor did they have anti-aircraft cover. The division of Captain Drapushko suffered losses in personnel. The camouflage nets were burning, paint was blistering on the heated trunks. At times, the battery per day collapsed to 300 shells, hundreds of minutes. The Germans were sure: “The Centaur-1,” as they called the 19 battery, was destroyed. But the Centaur fighters at night under a tarp at a candlelight repaired twisted guns and with the first rays of the sun again opened fire on the enemy.
Major-General I.Ye.Petrov, commander of the Primorsky Army, wrote in December 1941 of the year: “... The heroic battery of Drapushko, which took upon the enemy’s main attack in this direction, stopped the German offensive, defended an important area ...”
Major General PA Morgunov gave the command: do not spare shells! At a critical moment, blow up the battery and leave!
Under enemy fire, without heavy equipment, the batteries, rescuing guns, dragged many kilometers of sea 152-mm guns, and the battery started talking again from a new position on the 7 kilometer of Balaklava Highway.
December 17 began the second assault on the city. In the new position, the battery led sniper fire. The order of the 23 Fleet Commander February 1942 says:
The third assault began on 7 on June 1942 of the year. June 16 Aerial bomb that landed in the command post cut short the life of battery commander Mark Semyonovich Drapushko.
And on June 30, firing the last shells, blowing up the last guns, the battery moved to Cape Chersonese with the Red Army leaving the destroyed flaming Sevastopol. (on materials Underground Sevastopol)
Ctrl Enter
Noticed oshЫbku Highlight text and press. Ctrl + Enter
We are
Battleships against batteries of the Red Banner Baltic Fleet squadron operation in the Bierk ArchipelagoTrophy armored vehicles Wehrmacht. France
Military Reviewin Yandex News
Military Reviewin Google News
6 comments
Information
Dear reader, to leave comments on the publication, you must sign in.