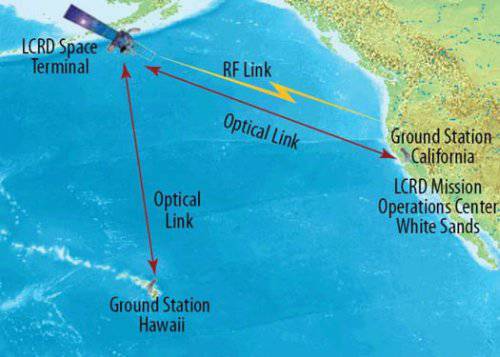 The question of how to transmit high-quality video information from the studied planets, for example, from Mars, has long been concerned with world space agencies. So NASA is already going to allocate $ 175000000 for new demonstration projects. In this case, the main among such projects is the project LOX - LCRD (laser optical communication system). Such a project should integrate in itself several well-known communication technologies in the optical range, which will increase the speed of data exchange between the Earth and space objects by several dozen times!

What influenced the need to move to LCRD-technology? The fact of the matter is that with the same existing amounts of electricity consumption, new laser communication systems allow for impressive speeds of information flows. Special frequency channels will be allocated for this. However, we must not forget that the use of a new generation of optical systems can lead to more complicated operation. The main problem is that the optical signal transmission system can not work in the face of any opaque interference. In other words, any obstacle simply “puts out” the signal. There is another reason for the complication of the process of using LOX. These are notorious weather conditions, because the Earth’s atmosphere is not always in the condition that allows it not to become an obstacle to the optical signal.

The LOX project (LCRD) is that it is necessary to establish optical communications between a particular terminal, which is a satellite, and ground stations. One of these stations was placed in California, others are going to be set up in the coming months also in the United States. Such a system will allow a trial exchange of signals between objects in space and on Earth. If the tests are successful, the implementation of the program will continue in the same mode. Today, scientists are trying to create an effective concept of countering external factors.

So, it is already clear that LOX allows you to increase the rate of exchange of data flows up to one hundred times. On this occasion, NASA states that at the present time the MRO, exploring the surface of Mars, communicates with the Earth via radio at 6Mbps. It turns out that the usual image made by the camera apparatus, reaches the surface of the Earth only one and a half hours after sending. Do not forget that the signal can simply be lost in the cosmic expanses due to various kinds of interference. It often happens that a low signal transmission rate simply puts the operation of the device at risk. After all, a snapshot going for such a long time is a real problem for NASA. What to say about high-quality video.

If we imagine that the same MRO, which can be equipped with LCRD, will transmit data at a speed of about 100 Mbit / s, then the time taken to take a picture is reduced to only 5 minutes. This figure is very acceptable for work.

The laser communication system will enable NASA to make a real breakthrough in space exploration.

Two other funded projects include projects for the implementation of manned flights into deep space based on the so-called solar sail and atomic clocks for the new navigation system. These technologies can be implemented in the coming years.
Ctrl Enter

We are in Yandex Zen
New anti-droning “multi-barreled” laser system for ship placement from Rheinmetall Defense Electronics
Mobile laser technology complexes developed by SSC RF TRINITI
3 comments
Information
Dear reader, to leave comments on the publication, you must to register.