If you have oil, then we go to you!

1 September 2011
14
“If you have oil, then we go to you!” Such a phrase can be considered the real motto of most modern military conflicts. The pronoun “we” in this case means all countries that cannot say goodbye to their imperial ambitions. First of all, it is of course the USA. 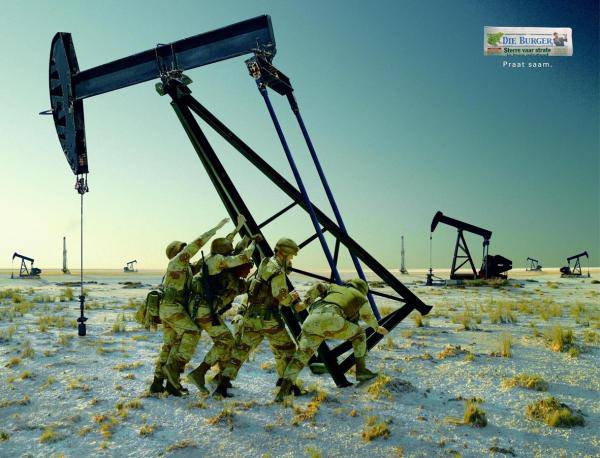 If we consider the so-called export of revolutions, then practically in each of them one can find an “oil” or “gas” trace. Analysts even noticed the following pattern: the more oil and gas reserves the state has, the more fierce these revolutions take place. As soon as American foreign intelligence forces allow the “worm of contention” into the apple of the domestic system, the process begins to take on certain forms.

In order to trace the ratio of conflicts with the level of hydrocarbon reserves, we turn to historical events. The events of the Great Patriotic War clearly indicate that the German troops wanted to get oil from the Soviet Caucasus. That is why the battles in this direction were no less fierce than the battles for Moscow. Trying to break through to the oil wells, the fascist machine moved to Stalingrad. How this campaign ended, we all know very well.

American troops at the beginning of 90 started active hostilities in Iraq, that de jure “liberate” the people of Kuwait from the “yoke” of Saddam Hussein, and de facto get the opportunity to control untold hydrocarbon reserves.

As everyone understands, the current situation in Libya is also closely related to the oil fields of this country. Many European countries have long had their hands on the Libyan "black gold", but Gaddafi’s tough methods of government kept the border closed, not only preventing Western "partners" from actively participating in the development of Libyan oil, but also, in fact, dictating to Europe their conditions oil and gas contracts. Of course, Gaddafi was a thorn in the eye of the West, until "liberation" wars rolled across North Africa. The world has been watching the confrontation for about six months, the essence of which is not even in who will be the new head of this Arab country, but in whose hands the threads of oil business management in Libya will be. Surprisingly, at a time when people continue to die in the streets of Libyan cities and bomb explosions are heard, the PNS is already beginning to dictate conditions to many foreign states in terms of concluding contracts. An example is the treatment of representatives of the new government, which, by the way, is not yet completely legitimate, to the states that did not participate in the operation against the forces of Gaddafi. As everyone understands, such states are Russia and China. So, the rebel leaders declare that they say that you (Russia and China) did not support the resolution against the colonel and didn’t go to war in vain. Now, they say, do not wait for the conclusion of agreements on oil issues on favorable terms. In the West, such a reaction is considered adequate. Still - she is the West and directed. Russia, even directly from the United States, declares that it is not necessary to be so conservative - it is necessary to immediately respond to global processes. And the Americans and their henchmen call these processes violent actions against whole nations in exchange for crude oil. One should not forget that in 90, the United States Congress seriously considered the question of how Siberia would be divided into areas of responsibility for the transportation of oil reserves to the European Union and the United States. Talk about the fact that Siberia belongs not only to Russia, but to the whole world is being held in the West today. It turns out that these "adherents of democracy" just sleep and see how the incredible reserves of Siberian oil flow into their bins without any payment. Of course, why “barbarians”, that is, you and I, have so much natural wealth.

That is the seed of all sorts of Western plans, supposedly aimed at the democratization of foreign societies, support for freedom of speech, and grow on this soil. Here, too, it is worth noting the stars and stripes: “Why did you, my friends, remove you from the position of the head of S & P, who decided to lower the credit rating of the States?” It turns out that freedom of speech, even within the United States itself, is nothing more than a fiction. After this, no democratic masks can no longer hide the gaze fixed on the oil regions of the world.

On this occasion, some people may wonder: what are the Americans doing in Afghanistan, because there has never been oil in this country. The thing is that the oil issue is not only in wells, but also in transportation. If the Americans established control over Afghanistan, which, as we well know, is impossible in principle, then the transit route of Central Asian oil towards Southeast Asia would fall into their hands. That is, the Americans at the beginning of their “democratic” operations in Afghanistan really tried to get a reliable channel for the supply of crude oil to China, Korea, Japan, Singapore and India near Russia. The prospect was more than tempting, but the Taliban were quick to remind the NATO army that it was not their place to give up their positions. And now the Americans are happy to get out of a long war, but so far they cannot think of anything to present such a solution in the form of victory. The billions spent on the operation yielded no result - what kind of president will dare to admit it ...

Obama, too, became quiet, although how it all began ... And this White House guest needs money for the election campaign - this is the reason for the Libyan merciless and senseless rebellion. It is naive to believe that the goal of NATO and the United States is Muammar Gaddafi. One goal - "black gold".

In such a situation, you need to understand that the "partners" will stop at nothing to gain access to oil and gas reserves in any region of the world.

We are in Yandex Zen
The personnel resource of the “color revolutions”: on whom does the USA rely in provoking chaos?
Results of the week. "The apple from the apple tree falls much further than you think."
14 comments
Information
Dear reader, to leave comments on the publication, you must to register.