Alexander Lukashenko responded to the "thunderstorm" from the West 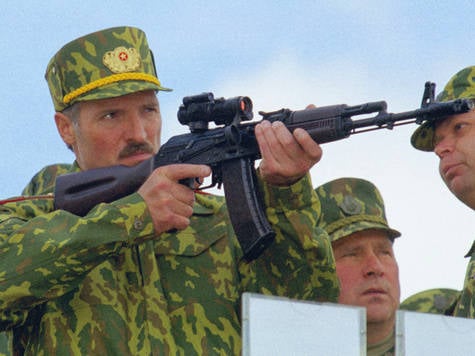 In the conditions when the world is being shaken by the “Arab revolutions”, the war is going on in Libya, the threat of war in Syria has appeared, Alexander Lukashenko has proposed to give the CSTO additional powers. And just a year ago, the President of the Republic of Belarus (RB) categorically refused to participate in the joint work of the CSTO collective rapid reaction forces. Apparently, the reason is really serious, since Lukashenko surrendered to the position of the irreconcilable advocate of the sovereign rights of the Republic of Belarus.


Alexander Lukashenko really surprised, during a meeting with the Secretary General of the Collective Security Treaty Organization Nikolai Bordyuzha, the Belarusian President stated the need to change the format of the collective rapid reaction force (CRRF): “This is not only about the application of the CRRF in case of interference from other countries, but in the case of intervention by other states within the CSTO countries ... Of course, no one will go to war with us, but many people are itching to make a constitutional coup ”.

Apparently, the Belarusian leader took into account the situation in Libya, where the “neocolonialists”, applied a new type of operation to demolish the legitimate regime. With the help of “rebels”, who in the eyes of the world media are turned into heroic rebels fighting the “bloody regime”. It is clear that the same scheme can be used in the demolition of any regime in Central Asia, in the South Caucasus, Lukashenka himself is “popular” with the Western media, and Putin’s part of the Western public considers the agent “bloody gebni”, which revives “Mordor” - Russia.

According to the President of the Republic of Belarus, he discussed the topic of using the CORF in order to prevent revolutions in the CSTO states with the President of the Russian Federation D. Medvedev during his visit to Sochi. True, it is unlikely that Lukashenko could agree with Medvedev on this topic. Currently, the participation of the CRRF in internal political conflicts is not provided for by the statute. And many of the countries included in the CSTO, the condition for their entry into the organization, put this item. Although after Libya, perhaps someone will reconsider their views. For the first time about such a change, Lukashenko hinted, even after the coup in Kyrgyzstan, when they overthrew Bakiyev.

In principle, Lukashenka is right, the pro-Western forces have recently intensified greatly, both in Belarus and in Russia. Therefore, it is not necessary to wait until the West finishes Gaddafi, decides everything in North Africa, really hits Syria. One can be sure that the process of “democratization” and “modernization” will also affect the post-Soviet space. In all the republics there are the same problems as in the Arab countries: high unemployment, dissatisfaction with the authorities, national and religious conflicts. There are separatists, there is a pro-Western liberal opposition, radical Islamists, etc. It’s impossible to wait until the situation is out of control and a “revolution” comes, you need to take countermeasures.

Lukashenko’s proposal could be an important step in integrating the former republics of the Soviet Union. For real historical step. This would create a barrier to the aggressive plans of the West. According to the head of the Republic of Belarus, “military bases of foreign states in the CSTO member countries” must be deployed “with the consent of the Council of the CSTO Heads of State”. “The organization must be holistic and united,” the president of Belarus rightly noted. In fact, hinting at the inadmissibility of the double game waged by some members of the military-strategic alliance (for example, such as Kyrgyzstan). A number of countries continue to play their multi-vector games, in effect letting the “Trojan horses” of the North Atlantic Alliance into the CSTO territory in the form of US and Alliance military bases. It is difficult to disagree with the President of Belarus that this would indeed be a real “breakthrough in the activities of the CSTO if we implement all these measures.”

On the part of Kyrgyzstan and Tajikistan, there has not yet been a reaction to the proposal of Minsk to jointly control the deployment of foreign military bases in the former Soviet Union. However, given the vicious inclination of our Central Asian "partners" to the most "flexible" foreign policy tacking and playing "multi-vector", it is easy to assume that it will take a long time to wait for a positive response, and if it does, it will be negative.

Therefore, Alexander Grigorievich, calculating such behavior of Central Asian "friends", suggested mercilessly cutting off "diseased organs" that impede new integration. At the same meeting with CSTO Secretary General Nikolai Bordyuzha, Belarusian leader Alexander Lukashenko called for the exclusion of the Republic of Uzbekistan from the Collective Security Treaty Organization. According to him, “if someone does not want to work and perform the statutory functions, then he must leave the organization and not interfere with the work of others.” Thus, the Belarusian president strongly urged to stop political correcting with the saboteurs of the integration processes.

According to the President of the Academy of Geopolitical Problems Leonid Ivashov, a similar mechanism a group of experts (which included it) was developed in 1992 year. This was necessary so that “on the most important international problems we would stand together.” But then this offer was rejected. At the same time, the question was raised about “internal insurrections and collective reaction” to them. And he was not supported - the proposal was rejected by the Foreign Ministry, headed by Kozyrev.

And the experience of using the CSTO forces in internal conflicts was. In the same Republic of Tajikistan, when, in fact, there was a real civil war. They helped to protect the border, and "participated in the opposition to local Wahhabis." Such forces could intervene in the events in Kyrgyzstan during the Osh massacre. According to the president of the Academy of Geopolitical Problems, “The Libyan scenario in the post-Soviet space is not a myth, but a real threat.”

Reference. Collective rapid reaction force (CRRF). These are joint military forces of the CSTO member states. It is believed that the CRRF is in a state of constant combat readiness to deal with emergency situations (ES), as well as foreign military aggression, terrorist activities, organized crime and drug trafficking. The composition of the CSOR: the Russian Federation, the Republic of Belarus, Armenia, Kazakhstan, Uzbekistan, Kyrgyzstan, Tajikistan. The agreement on the creation of the RRF was signed on February 4 of the year 2009. It is planned that the military base of the Collective Rapid Reaction Forces should consist of units and units of permanent combat readiness. They must be capable of mobile transfer to any point in the area of ​​responsibility of the Collective Security Treaty Organization. It is planned that the KSOR will also receive special forces in its membership, and they will be formed from internal affairs agencies or the police, units of internal troops, state security organs and special services, as well as emergency prevention and response agencies. The basis of the KSOR are subdivisions of the Russian Federation, Kazakhstan and the Republic of Belarus. From Russia - this is the 98-I Guards Airborne Division (in the Ivanovo Region), the 31-I Guards Airborne Assault Brigade (in the Ulyanovsk Region). Kazakhstan - 37-I airborne assault brigade (Taldykorgan), a battalion of marines. Belarus - special forces brigade. According to the 1 battalion from Armenia, Tajikistan and Kyrgyzstan. You can also enter the Ministry of Emergency Situations and the special forces of the Ministry of Internal Affairs. They are located in permanent places of dislocation. They are subordinate only to their national commands, and if necessary, coordination should take place at the CSTO level. At the end of 2009, the KSOR forces conducted large-scale exercises near the Kazakh-Chinese border, at the military range Matybulak.
Ctrl Enter

We are in Yandex Zen
News CSTO CSTO
Sudden verification of the readiness of the CSTO CSTO
79 comments
Information
Dear reader, to leave comments on the publication, you must to register.