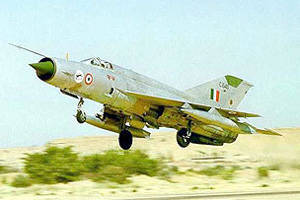 
To reduce the loss of combat aircraft, the Indian Air Force is currently implementing several programs to improve flight safety. In particular, we are talking about the dispersal of birds over airfields, as well as more thorough training of pilots on simulators. In November 2010, the Indian Air Force announced that in 45 the percentage of crashes caused by the aircraft was a pilot error. In 42, the percentage of crash events occur due to technical problems, and the remaining 13 percent comes from unpredictable incidents, including bird strikes.

For the Indian Air Force is characterized by a high level of accidents. In particular, from 1970 to 2000, the country annually lost an average of 22-23 aircraft and helicopters, and since 2000 of the year - on 10-15 aircraft per year. Currently, the Indian Air Force is undergoing a large-scale modernization of its fleet. For these purposes in the coming 12 years it is planned to spend about one hundred billion dollars. This amount includes the purchase of training aircraft, fighters, military transport aircraft, anti-aircraft missile systems and bombers.

We are in Yandex Zen
The Brahmos missile was almost completely integrated with the Su-30MKI fighter
Shenyang J-16 and Su-30МКИ: fighter rivalry continues
8 comments
Information
Dear reader, to leave comments on the publication, you must to register.