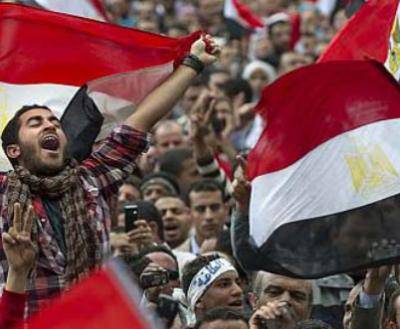 The widespread informational aggression of the West in the Muslim world could not but lead to the loss of traditional values ​​by the Arab youth, which at some point prompted it to active political protest. The fact that Western ideological centers and special services had a hand in organizing the protest is absolutely obvious. This was most clearly manifested in the final period of the armed struggle in Libya.

The Arab impulse provoked by democracy towards democracy under authoritarian rule could not but create a complex ideological and political situation that threatens historical dead end. Revolutionary outbreaks began to take on increasingly strange and contradictory forms. The “Arab Spring” has already presented three successful coups (Egypt, Tunisia, Libya) and three powerful anti-government movements - in Syria, Yemen and Bahrain. In the last three cases, nothing has been decided. Yemeni citizens, for example, are clearly trying to repeat the path of the Libyan rebellion, and the Yemeni government has flooded the capital with troops so that the demonstrators ’celebration of the overthrow of Gaddafi does not translate into a repeat of the Libyan events.

At the same time, everything that happens in these countries does not at all promise the establishment of a democratic law and order according to Western standards.

The behavior of the victorious opposition in Libya is noteworthy. The leadership of the rebels consists of factions that have long been at war with each other, and the upcoming division of power threatens to turn into bloody clashes. There is another important circumstance. During the 40 years of the rule of ousted M. Gaddafi, Libyans got used to the fact that their standard of living increased, and they became a prosperous people. Today, the economy is paralyzed, and only consolidated and competent leadership, which has overcome the internal split, can start it again. There is little hope of this, and it may well turn out that after several months of economic chaos, Gaddafi’s supporters will gather around themselves the population under the slogan of the need to eliminate the incapable democrats.

The tribal structure of the population of Libya provides the overthrown colonel with a sufficient number of supporters. In addition, as recent events show, the leadership of Algeria, which did not recognize the Transitional National Council, is ready to support Gaddafi. New lines of confrontation are beginning to take shape that could lead to a new outbreak of civil war.

NATO is not very concerned about the prospects for the continuation of the fratricidal Libyan massacre - if only there was an opportunity to adjust the production and export of oil from this country. Something like in Iraq, where the war allowed oil to be exported at unbelievable prices - 20 dollars per barrel for the elect.

Libya will turn into one of the centers of radical Islamization of a vast region. To the accompaniment of the “Arab spring”, the danger of terrorism has increased by an order of magnitude, and the most aggressive branches of Islamism are already represented in political structures. Thus, Salafists who are close to Al-Qaeda and are considered its offspring appeared in Libya (in other countries they are called Wahhabis). This force seeks to increase its influence in the country and does not hesitate to use terror for political purposes. Salafists are fairly well represented today in Egypt and Syria, where they did not have much influence before. It is believed that this current is financed by Saudi Arabia, which plays its game in the Arab Spring.

One of the radical ideas of radical Islamism of this persuasion is the liberation of the Muslim world from foreign influence, and this will inevitably lead to a conflict between them and the local "democrats."

Another circumstance causing serious contradictions in the “revolutionized” countries is the role of the West in the ongoing processes. It is widely believed that certain forces in the West intentionally fan the flames of the Arab revolutions.

“Some compare Libya after Gaddafi with Iraq after Hussein,” notes Bashir al-Bakr in the Lebanese newspaper Al-Akbar. - In Iraq, there is practically a smoldering civil war, and there is no end in sight. The Americans underestimated the real influence of Hussein on the situation. After the start of the intervention, contradictions in Iraq deepened for many years. The same thing has been outlined in Libya today. It is unlikely that the Libyans would happily avoid a repetition of the Iraqi situation. They have already committed many serious crimes against each other and continue to commit them. Consequences will not allow them to reasonably get out of the situation. ”

“For many in the region, foreign intervention in Libya has caused suspicions that the West is doing this because of oil,” writes the Lebanese newspaper Al-Safir. “NATO support was not free, and Libyans will have to pay bills.” If we bear in mind that the economic situation here is deteriorating sharply, then the Islamists have a real opportunity to mobilize their supporters on the basis of anti-Western arguments, directing them against the local democrats, who are regarded as proteges of the West. And again, the situation turns into an increase in the influence of radical Islam. It cannot be ruled out that those revolutionaries who today publicly kiss American and French flags will be targets for the pursuit of the starving and brutal crowd tomorrow.

Meanwhile, in the south of Yemen, Al-Qaida, which already controls entire administrative districts, is becoming stronger. The time will come when groups of militants-terrorists will begin to penetrate from this territory into Egypt, Tunisia, Syria, and Libya. The first of them have already settled there. “We are moving into the unknown,” said Lebanese political analyst Talal Atrisi. “The next stage will be a stage of conflicts and clashes between political groups with the aim of winning power ... This period will be a long one, full of trials and cruelty.”

The organizers of the Arab revolutions have released seismic forces, which are just starting to move. Inspired by fraud slogans about freedom, an Arab street will soon recognize terror, which carries chaos and violence instead of the power of the people ...

We are in Yandex Zen
Time to declare war on world government
Tatarstan authorities will restore order in the republic - Sharia
9 comments
Information
Dear reader, to leave comments on the publication, you must to register.