October 5 2013
22
Tommy-gan, Thompson submachine gun, Thompson submachine gun, "Chicago piano", "trench broom", "devil's death machine" and even "trade engine" are all names for the most "gangster" in the world weapon, which became a symbol of the American gangster warrior and has established itself well on the battlefields of World War II. In this case, the birth of the legend was almost an accident. The creator of such a famous weapon was a retired colonel John Toliver Thompson - an expert in the field of armaments, a military supplier and an experienced merchant. As a military expert, he was once invited to Russia and participated in testing the Mosin rifle. Even then, Thompson understood that the future was for automatic weapons and was going to develop an automatic rifle for further sale to the military department.


To achieve his goal, he acquired a patent for a bolt for automatic weapons (which was issued to inventor John Blish in 1915), assembled a team of like-minded people and began to develop in 1916. During the two-year tests, it was possible to establish that the bolt, the main part of which was the H-shaped bronze retarder, was quickly wearyed by the recoil of a powerful rifle cartridge. The only cartridge with which such a design worked quite reliably was the Colt .45 ACP pistol cartridge. Considering that even then the .45 ACP was a standard army pistol cartridge, Thompson decided to concentrate all his attention on developing weapons for him. 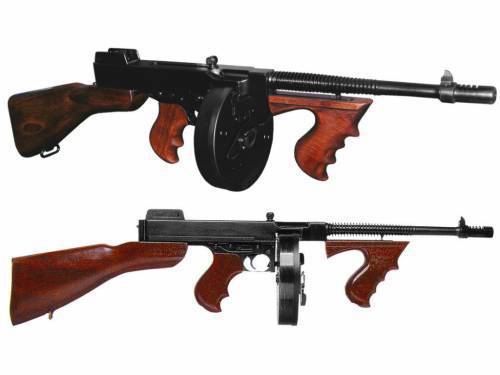 Thompson M1921
The first reliable model was manufactured in 1918 year. The submachine gun was called the "Annihilator" (the destroyer) and was handed over to tests by the military on the last day of the First World War. During the tests, the commission noted the advantages of high rate of fire (up to 1500 rounds per minute) and reliability of the design. As disadvantages were called - a lot of weight (so only the fully equipped 100 magazine weighed more than 4 kg.) And the high price of weapons (225 $, while the price of a car was about 400 $). The high cost was due to the fact that all the details were carried out on precise metal-cutting machines from solid discs, and the barrel of a submachine gun for protection against corrosion was coated with silver.

The first industrial batch of the Thompsons was produced in 1919 year. Due to the lack of in-house production, the first 15 000 copies were produced in Colt factories. In 1921, a modified batch of M1921 was released, which received improved performance: the rate of fire was slowed down (to 800 rounds per minute), concentric edges appeared on the barrel for faster cooling. In order to increase the accuracy of firing at the end of the barrel was installed muzzle compensator. It was at that moment to increase the advertising effect of the weapon called "Tommi-gan." Subsequently, it became a household name for all models of the company Auto-Ordnance Company, created by John Thompson for the production of its submachine guns.

Taking into account the wishes of the military, in 1923, the “military” model M1923 with a flat head instead of an additional handle (to reduce costs) was presented, with a box-type magazine on 20 cartridges (for easy reloading and weight reduction), with the possibility of installing a bayonet, as well as a bipod for emphasis when shooting. This model could also be used with the “old” drum magazines of the Payne system on 50 and 100 cartridges. But the military did not show interest in this type of weapon. For wider distribution, this model was sent to tests in Europe, but even there it was not possible to find buyers. 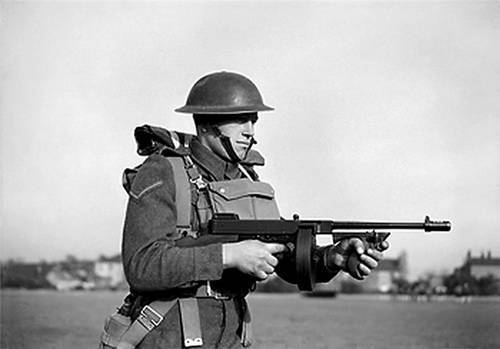 English soldier armed with Thompson M1928
At this point, Thompson’s company was on the verge of bankruptcy. Trying to find a way out of the current situation, the inventor tried to push his light machine guns into the police, heading the anti-bandit gun campaign started. Initially, the police showed no interest in this weapon. And as it turned out later, in vain!

The adoption of a “dry law” in the United States led to unprecedented smuggling of liquor. Alcohol was supplied to the country mainly from Canada, where there were no bans on the manufacture and sale. The illegal trade in alcoholic beverages has become fabulously profitable underground business. By the time the market was somewhat saturated, it was Tommi-Gan who became the “engine of commerce”, one of the “most reliable partners”, and also the means for eliminating competitors and the most curious policemen. In the end, in order to adequately confront a well-armed organized criminal group, the Thompson submachine gun was adopted by the police. They also armed with FBI agents, the postal service and the US Coast Guard, and the FBI was armed with a submachine gun until the 1976 year, after which it was declared obsolete and removed from service.

In technical terms, Thompson submachine guns are a weapon made according to a scheme with slowing down the recoil of the free shutter (the so-called semi-free shutter). The slowdown was realized by friction of the H-shaped gate liner, which interacted with the inclined bevel in the receiver. Drummer is movable. The cocking handle is located on the top cover of the receiver. Manual fuse and translator fire modes were made in the form of separate levers located on the left side of the receiver. The sights consisted of a front sight and a combined rear sight - a flip-up adjustable diopter sight and a fixed sight with a V-shaped slot (sighting range of 100-150 meters). Thompson submachine guns could be used with magazines of various sizes - box-shaped double-row magazines for 20 and 30 cartridges or drum cartridges for 50 or 100 cartridges. At the same time, the mass of the 100-cartridge shop was almost 4 kg., Which, together with the high cost and complexity, practically excluded its military use. Drum shops were inserted and pushed into the receiver from the side, which made it possible to ensure more reliable fixation in the weapon, while box magazines were inserted into the receiver traditionally from bottom to top. 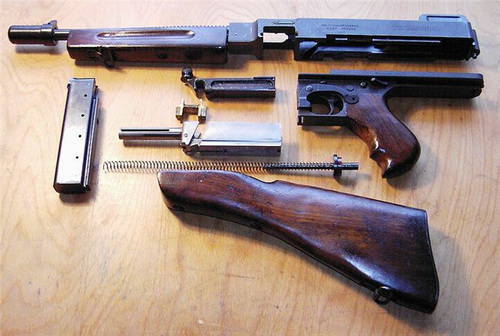 Thompson M1 disassembly
All Thompson submachine guns were distinguished by good reliability and high quality workmanship. At the same time, the large steepness of the flight of a bullet, together with the high mass and substantial cost of manufacture, limited the military use of these weapons.

M1921 is the first production model. It has a vertical front fire control grip, partially ribbed barrel and a high rate of fire.

M1923 is a commercially unsuccessful version of the creation of a military submachine gun with an attempt to increase the effective firing range by using a new, more powerful .45 cartridge Remington-Thompson.

M1927 is a semi-automatic version of the M1921. The barrel was equipped with a muzzle brake-compensator.

M1928 - also known as the “Navy model” (naval model). The submachine gun had a 2 fire regime, a ribbed barrel equipped with a muzzle compensator, a low rate of fire (up to 700 rounds per minute). Produced with a horizontal wooden forearm, and with a vertical front handle. In the US Army was in service under the symbol M1928A1, submachine guns from the time of military release could not have a barrel fin, and also equipped with a completely simplified design.

M1 - A simplified version of the M1928 model, was developed to reduce the cost of production in a war. Model released in 1943 year. It features an automatic with a free gate, the presence of a loading handle on the right side of the receiver, a wooden forearm, a barrel without a compensator and fins and can only be used with box-type stores. An even more simplified version of the submachine gun under the symbol М1А1 had an unregulated diopter sight instead of a throw-over. 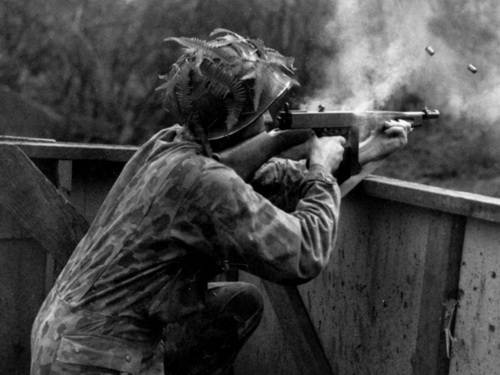 American soldier firing from Thompson, Hawaii training base 1944 year
In the United States, as in many European countries, for a long time they did not see powerful military weapons in machine pistols. Only in 1928, the command of the Marine Corps, which took part in the intervention in Nicaragua, acquired several thousand Thompsons M1928 to reinforce their units. The limited use of new items in the armed forces did not reveal the true capabilities of these weapons. Only with the beginning of the Second World War did the essential changes occur in the armament system of the American army. The rapid development and growth of armored troops and motorized infantry led to the need to equip their crews with compact automatic weapons, for this role the Thompson submachine gun was quite suitable. It was then that the Thompson M1928А1, which differs from the 1928 model of the year, was adopted by the US Army, only by the presence of a wooden forearm instead of an additional pistol grip. For the organization of their mass production, the capacities of Auto-Ordnance Corp and the avage Arms Sogr enterprises, which were connected by Thompson under the subcontract, were used.

Despite its heavy weight and cumbersome Thompson submachine guns are widespread on all fronts of World War II. Thanks to his high service and operational properties, he gained popularity among the rangers, paratroopers and military intelligence. The US industry as a result of significant costs and efforts was able to establish mass production of these weapons. In the period from 1940 to 1944, the 1 387 134 Submachine Gun of all models was manufactured 1928 1 562 - 511 1, 285 - 480 1, 1 539.