The confrontation of Algeria and the Libyan rebels. Algeria, as a new victim of the wave of "modernization" 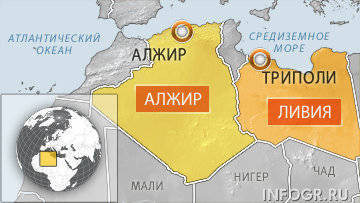 
There was a whole chain of events that can be noted as very bad "bells" for Algeria. On August 26, a terrorist attack took place outside the military academy building in the Algerian city of Cherchell, as a result of which several dozen people were killed and wounded. The Al-Qaida unit in the states of the Islamic Maghreb claimed responsibility for the attack, representatives of the Islamists stressed that the attack was in retaliation for Algeria for its support of the dictator Gaddafi. It should be noted that Al-Qaeda in Libya acted in conjunction with the Libyan opposition, the Western coalition.

After that, the Algerian authorities reported that Islamic terrorists who committed the terrorist attack in the country fled to Libyan territory, which is controlled by the rebels. Such a message infuriated the Libyan rebels. The official military representative of the Transitional National Council (PNS), Ahmed Omar al-Bani, said: “Algeria has launched a war against us, and we expect everything from them. They support the tyrant Gaddafi, who is fighting against the Libyan people. " The Algerian authorities sent him to reinforce mercenaries who illegally crossed the border of Libya, Algeria illegally supplied weapons to the troops of M. Gaddafi. And further: "And now they accuse us of hiding al-Qaeda militants, thereby demonstrating our true attitude towards us."

It is clear that it is impossible to assert that all Libyan rebels are all members of al-Qaida. But it cannot be denied that the units of the Libyan Islamic Group, which were noted in the fight against the forces of Gaddafi, are in close contact with Al-Qaida. The Algerian authorities are not happy about the fact that the “military commander” of Tripoli was Belhadj, who during his life managed to take part in a number of military conflicts in various regions of the planet on the side of Islamic radicals. There are Algerian Islamists among the Libyan rebels. Their contacts with their comrades in Algeria confirm the fact that in the wake of the terrorist attacks against the Algerian authorities and the military, launched in April, they actively used weapons stolen from Libyan military depots. Taking Tripoli, the rebels defeated and looted a number of embassies, including the embassy of Algeria.

The anger of the Libyan opposition was caused by the fact that Algeria accepted and, in fact, saved the family of M. Gaddafi. His wife, daughter, two sons and their children. Some Libyan rebels fear that Gaddafi himself has disappeared illegally in Algeria or that he is going to flee there. As a result, the Algerian authorities have neglected the recent EU warnings about the inadmissibility of granting political asylum to any member of the Gaddafi family. And although the Algerian authorities declare that the Gaddafi family was missed out of "humanitarian considerations" and will leave the country, having left for a third country, their behavior is defiant both for Libyan rebels and for the West.

After all, there is an understanding of the fact that while at least one representative of the Gaddafi family lives, the current winners cannot live in peace. Few people in Libya still understand the fact that with Gadhafi’s departure, the social benefits that he guaranteed to the entire Libyan people as part of the practical implementation of the ideas of the so-called. The Green Book. His Jamahiriya, a kind of Islamic socialism, has sunk into oblivion. Already in Libya, the negative consequences of the fall of the Colonel’s power can be noted: there is a shortage of water and food in the cities, there is no centralized gas supply, you have to cook with wood, marauders rob embassies, kill blacks, declaring them “Gaddafi mercenaries”, etc. from the country, the remaining foreigners are doctors, other medical personnel, teachers, etc. Nostalgia for lost well-being will sooner or later force many Libyans to dream of his return or his children.

Therefore, the representative of the PNS Shammam described the event that took place not only as a desire to provide assistance for humane purposes, but as an aid in the subsequent triumphal return of the Gaddafi family to Libya. A PNS military spokesman, Ahmed Al-Bani, said that the new authorities in Libya would seek to extradite members of the Gaddafi family and regard the event as an “act of aggression” by the Algerian state. Algeria’s behavior also shows its position on the PNS, the Algerian authorities openly refuse to recognize the power of the rebels. He literally stated the following: “The day will come when they will have to answer for their attitude to the Libyan revolutionaries.” This is actually a threat.

In addition, a few days ago, the Algerian army occupied part of the Libyan border area under the pretext of solving the tasks of "protecting the representatives of the Algerian community." This message even led to what appeared news, saying that Algeria sent troops to Libya in order to support the regime of Gaddafi. In part, what is happening can be explained by the fears of the Algerian authorities that the Libyan Berbers-Amazigs will want to support their kindred Kabils of Algeria, among whom opposition and even separatist sentiments are growing. A number of Libyan "field commanders" regarded this event as another act of aggression by the Algerian state, "which will not go unpunished."

Thus, it can be noted that the claims of the Libyan rebels to Algeria have accumulated a lot. Algeria is accused of many articles that NATO, if desired, may present Algeria. Even direct provision of military assistance to Gaddafi is attributed to the neighboring state. In principle, part of these accusations is true, Gaddafi’s neighbor is beneficial to Algeria, and not the gang of “field commanders”.

And the Algerian authorities, led by President Abdelhafiz Bouteflika, categorically refused to soften their position on Libya, according to which the North Atlantic Alliance should immediately cease all hostilities and peacekeeping units of the African Union should be introduced into Libya. In July, there were accusations that Algeria was pressing on the new authorities of Tunisia to support Gaddafi. On July 10, PNS Vice President Abdelhafiz Gogh (Gogha) accused Algeria of continuing to send mercenaries to Gaddafi, assisting in the killing of "innocent civilians."

Algeria is gradually becoming the next in line for “modernization” and “democratization”. The situation for the Algerian authorities is complicated by the fact that in the state the opposition of the authorities and society is intensifying. Particularly active in the "swinging" of their state is manifested by various youth organizations that are seeking "the speedy implementation of democratic reforms." Behind them are the forces of the West, including France, which traditionally has established channels of influence in Algeria.

In any case, the Algerian authorities understand that there is a transformation of the entire region and there is no place to retreat. The point is not the revenge of the West or the Libyan rebels for the help of Gaddafi, but in the principle itself - the whole Islamic world is under attack. Algeria in any scenario is under attack. Even if the West temporarily leaves him alone, radical Islam has already been activated. In the embers of the civil war extinguished in Algeria (1991-2002 years), new kerosene was poured.

And the interests of the Islamists strangely coincide with the interests of the West. In Algeria, the situation will be swayed, the popular discontent will be stirred up in every way, the benefit of social problems in the country a lot. Then the scenario of Egypt or Libya will be implemented, depending on the stubbornness of the Algerian government.
Ctrl Enter

We are in Yandex Zen
War in Mali. Russians are victims of jihad in West Africa
Judgment in Tripoli. Saif al-Islam Gaddafi sentenced to death
18 comments
Information
Dear reader, to leave comments on the publication, you must to register.