The frigate of the 22350 project “Admiral Kasatonov” was launched

December 13 2014
38
In St. Petersburg, the frigate “Admiral Kasatonov” was launched. The commander in chief of the Russian Navy Viktor Chirkov received the solemn ceremony of launching the frigate of the 22350 project. Commander-in-Chief of the Navy quotes news agency RIA News:

This is a significant event for the plant, designers, Russia. We launch the first serial ship, the second ship in the 22350 series, it will solve the problem of ensuring the national interests of the Russian Federation anywhere in the oceans.

Admiral Igor Kasatonov, the son of Vladimir Kasatonov, in whose honor the frigate was named, took part in the ship launching ceremony. 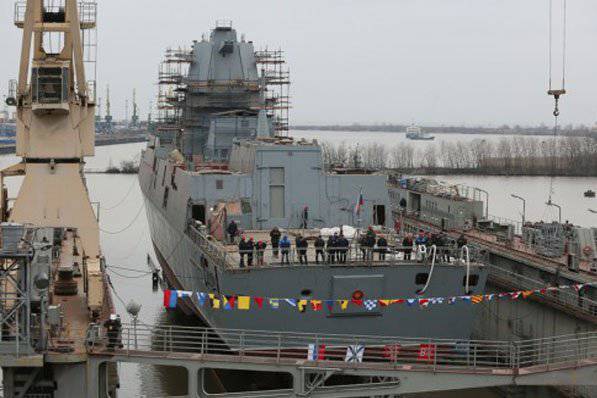 At the same time, Viktor Chirkov recalled that the main frigate of the 22350 serial project "Admiral Gorshkov" is already undergoing the necessary tests. Ships of this project are being created at the shipyard “Severnaya Verf”.

Such frigates can be used as multipurpose warships of the far sea zone. The characteristics of "Admiral Gorshkov" and "Admiral Kasatonov" are as follows:

In service with the frigates of the project 22350 are:

A-192 "Armat" naval artillery installation (130-mm), launchers for 16 of Onyx or Caliber-NKE anti-ship missiles, as well as the Polimet-Redut air defense system.

There is a possibility of basing the Ka-27PL helicopter.

The plans of the Severnaya Verf are to launch the third frigate of the same project in 2015. The frigate was named "Admiral Golovko."

Ctrl Enter
Noticed oshЫbku Highlight text and press. Ctrl + Enter
We are
"Admiral of the Fleet of the Soviet Union Gorshkov" of the 22350 project - transition from St. Petersburg to KronstadtSevernaya Verf Shipyard will launch the third serial corvette of the 20380 Stable project in May
Military Reviewin Yandex News
Military Reviewin Google News
38 comments
Information
Dear reader, to leave comments on the publication, you must sign in.