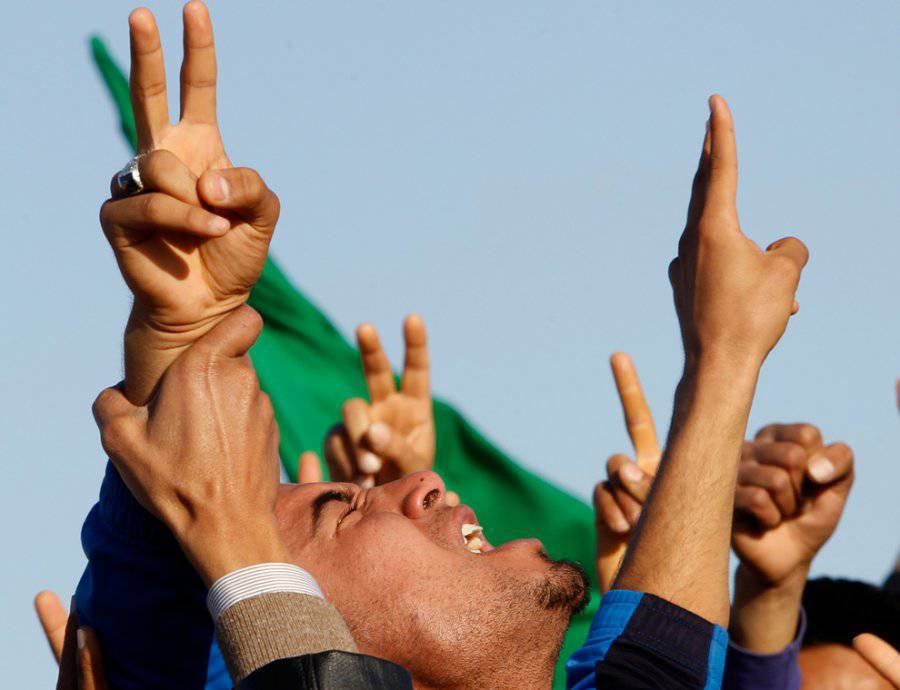 The overthrow of the power of Colonel Muammar Gaddafi in Libya immediately raises many questions that, in the course of a long confrontation with the dictatorial regime, would somehow recede into the background. And the main one - what will happen next with Libya? After all, now that Gaddafi has already been dismissed, Libya will have to go a long and painful path until a peaceful and stable life becomes the norm for Libyans.

The reality is that in addition to the obstacles in the form of supporters and associates of Gaddafi, who will certainly stand in the way of Libya, hindering its successful transition to a democratic form of government, there are also obstacles within its own ranks of the rebels. Already, there are very disturbing signs of friction between pro-Western rebels and radical Islamists who are ideologically opposed to creating a new government based on Western-style democracy.

How to overcome these differences today is difficult to say. But if at the beginning of the formation of a new Libya, this problem is turned a blind eye, then it is very likely to provoke a civil war in the country and lead to its division into parts.

It is also necessary to take into account the factor that Gaddafi is not the former Egyptian President Hosni Mubarak. So, after the overthrow of the dictatorship in Egypt, the power passed into the hands of the "guardians" from among the military, the opposition political forces and independent media that had been activated had intensified, but the painful but realistic way of moving the country towards greater democracy continues there. In Libya, the situation is completely different. Muammar Gaddafi ruled since the overthrow of the monarchy in 1969. This country has no constitution, and political parties and trade unions have been banned there for 35 years.

It can be said that in Libya there are no structured organizations that could establish interaction between the government and the people, represent the interests of society and put forward their demands not in the form of opposition to the regime, but through a constructive dialogue with the authorities. It is obvious that the transition period in post-dictatorial times should be used to prevent a power vacuum and restore the political life of the state as soon as possible.

In addition, it should not be forgotten that in its time Libya was a rather artificial state entity, combining the three former provinces of the Ottoman Empire. And so the lack of a mature national identity greatly complicates the task of building a new Libyan state on the ruins of the dictatorship of Muammar Gaddafi.

The only way out of the crisis, which Libya can enter after the victory of the revolution, may be the agreement of its new leadership with the leaders of more than 100 tribes living in its territory. Actually, the development of a new paradigm of state-building is a reliance on continuity and change. Tribal identity is becoming important today, since Gaddafi deliberately destroyed civil society in Libya during his reign. To do this, create a new viable political system is really possible, only taking into account the tribal interests and the demands of their leaders.

Although in this case, the tribes, no matter how influential they may be, cannot replace the actual political process. After all, it is difficult to have a real democratic process if a part of the population will vote based solely on their tribal affiliation. Such an attitude to politics is quite capable of bringing the same negatives of tribalism and regionalism, which are traced today by the example of a number of African countries.

It is worth trying to consider possible scenarios for the future development of Libya. First of them - absolutely positive. New Libya is successfully in its infancy. The country has formed several powerful political parties participating in the upcoming parliamentary elections and successfully form a government of national unity, which, on the basis of the constitution and respect for the laws created by the best experts, promotes Libya along the path to democracy to take its rightful place in the global world community. Libyans will receive massive financial and technological assistance from the West, gradually a new and modern Libya is becoming a role model for the entire changing Arab world.

Scenario Two - less optimistic. The democratic and pro-Islamist forces in Libya, after a long and difficult period of trying to reach an agreement among themselves, could not come to an agreement. Several newly formed democratic parties enter into intense political competition with radical pro-Islamist political groups, and de facto dual power is established in Libya. The West is beginning to give up on political and economic reforms that the coalition government is unable to carry out. Western aid is beginning to diminish, while Islamist influence in Libya is growing steadily.

Nostalgia of a part of the population about the “stable” times of the Gaddafi regime begins and comes into force, his supporters take the political stage, forming their own party, which, taking part in parliamentary elections, gets at least a third of the deputy seats. A slow but steady process of restoration of “Gaddafism” begins, using which the supporters of Gaddafi try in every way to block any positive changes in Libya.

scenario third - even less positive. Political confrontation with time passes into openly power forms. Democrats cannot control the whole country. The leaders of the tribal unions provoke the division of the country, and the central government, under pressure from opponents, will eventually be forced to agree to the federalization of Libya on tribal grounds. Its territory is divided into three parts, and this division will approximately correspond to the conditional borders of the three former provinces of the Ottoman Empire. The country is decentralized and becomes virtually unmanageable. Having usurped in their favor oil revenues, tribal leaders soon turn into oligarchs who will dictate their will to the new government.

Scenario Four - catastrophic. After long and fruitless attempts to reach an agreement with the Islamists, the democratic government loses its position. The standard of living of ordinary Libyans is deteriorating, and Islamists are gaining more and more support among the population. In parliamentary elections, using fraud and intimidation, the Islamist party "wins". The central government in Tripoli refuses to recognize the results of the rigged elections and declares them invalid. Islamists are beginning to use force to defend the results of their “victory” and Libya is slipping into a civil war. The result of it is the division of Libya into two parts, one of which is under the control of the Islamists.

Those who are currently designing a new Libya must necessarily take into account the greater likelihood of the deployment of all these four scenarios of possible developments. After all, as the experience of the events of recent years in Iraq and Afghanistan shows, it is much easier to overthrow non-democratic regimes than to effectively rule the country later. The internal crisis in Libya is quite capable of provoking a new civil war, which in the end may turn out to be much more brutal and bloody than the one that preceded the overthrow of the regime of Muammar Gaddafi.

One thing is clear: Libya is entering a critical phase of its development, and the transition from destruction to construction can be no less difficult and dramatic. Therefore, it is very important in any case not to allow the very beginning of the expansion of the fault lines due to quite real ethnic and religious tensions, which Gaddafi has been able to keep in check by dictatorial methods.

In fact, the Libyan leadership faces a very difficult choice - how to prevent its state from slipping into chaos and anarchy, while at the same time moving towards a democratic choice. It is obvious that today the tasks facing Libyans are extremely complex. Only under the condition of professionalism and morality of the new government and real help from the West in all directions, can Libya successfully pass this crucial exam. stories. The exam, on which will depend not only its fate, but also in many respects the situation in the entire Middle East region and the Mediterranean as a whole.