Why did we lose the Cold War?

August 29 2011
37
Many believe that in the 1980-ies the Soviet Union technically lagged behind the United States. However, we did not lose the Cold War due to a technical lag. Everyone knows that our techies were much cooler than technical specialists of a potential opponent. Our equipment was also no worse, and in some ways even better than in Western countries. Maybe we lost it because of the economic lag? Also not true. Gorbachev called the last years of Brezhnev reign a period of stagnation. However, in fact, the stagnation in the economy was not with Us, but with Them. 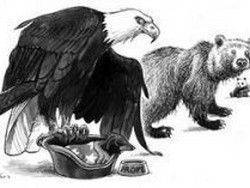 If for 1980-84 of the year, the national income of the USSR increased by 19%, then in the USA this growth barely reached six. At 14% over the same years, we have increased productivity. In the US, this figure was only 3% over the years. At the same time, such years as 1980 and 1982 were in America for years not of growth, but of fall. So, in 1980, the drop in production was 3,6%, and in 1982 - 8,2%. Industrial production in our country during the XI five-year period (1981-86) increased by 18%, while in America this growth was only one percent. And, most importantly, real income per capita increased in our country by 13%, while in the US they decreased by 9%. In 1983, the national income of the USSR was equal to 66% of the US. The volume of industrial production was from the US 80%. The share of the USSR in world industrial production was 21%. Now, however, the share of all countries of the former USSR, including Russia, is only about 3%. In the production of pig iron, our country exceeded the USA by 2,86 times, and by steel - by 2,14 times. Yes, by some indicators, the US was ahead of us, but by most of them, as can be seen from the following table, drawn up, by the way, according to the CIA, We were ahead of the US

Maybe the gap in the standard of living between Them and Us is to blame?

And this is also not true. Our objective standard of living was no lower than in the United States. In 1983-85 Soviet people a day consumed an average of 98,3 g of protein, and an American consumed 104,4 g. The difference is not that big. True, the American ate a lot more fat - 167,2 against our 99,2 - but this made him an average kilogram of 20 leaner than Russian - 71 kg against 200 pounds. But on the other hand, we consumed an average of 341 kg per person per year of milk and dairy products. In America, this figure was 260 kg. Sugar consumption in the USSR was 47,2 kg per year per person, and in the USA, 28 kg.

A dollar in 1983 cost 70,7 a penny (See: Ruble to dollar and dollar to ruble from 1792 to 2010), and the average Soviet person’s salary was 165 to 75 rubles ($ 234.44) (See: Salaries in Russia and the USSR for 1853-2010 years, expressed in rubles, dollars, and kilograms of potatoes) per month. The average American’s salary was then 1269 dollars 94 cents (See: Salaries in the US from 1950 to 2010 years, expressed in dollars and liters of gasoline). It seems to be, in 5,15 times more. But the same American gave 56 cents (39,5 kopecks) for a loaf of bread, and Russian gave 13 kopecks, that is, three times more. On the phone, the Russian called for two kopecks, and the American for 25 cents (17,67 cop), that is, gave a phone call more than 8,837 times. Russian paid five kopecks for public transport, and 3-4 paid for the tram and trolleybus, depending on the region. The American for the fare gave that whole $ 1. In addition, the American paid an average of $ 6,000 per year for his student’s son, and a Russian student received 40-55 “re” per month just because he regularly attended lectures, and if he was an excellent student, he received a so-called Lenin scholarship in the amount of 75 rubles, which was 5 rubles more than the janitor’s or janitor’s salary.

The majority of American expenses were paid for an apartment, equal in average to $ 1983 per month in 335 a year. I paid 9 rubles 61 a penny of utility bills for a two-room apartment in those years. Other Soviet citizens paid about the same amount.

Housing in those years was rented only by students or very young families. But even if I suddenly needed to rent a house, I could rent the same two-room apartment a little bit in Banny Lane for 40 rubles ($ 28), that is, 12 is cheaper than in America.

Of all the foods in the US, only eggs were cheaper. If we have an egg of the first category cost 12 kopecks (the second category, respectively, 9,5 cop.), Then in the US a dozen eggs cost 89 cents - that is, 5,24 of our then-penny per egg. However, at the general purchasing power parity, the ruble could be equated to 5,5 dollars. That is, in fact, the dollar was not officially overvalued, but undervalued.

Why, then, did our people pay currency at six rubles per dollar? Yes, because for the currency operations in the Soviet era shot - for both the buyer and the seller, it was a risk charge. Similarly, a bottle of whiskey, which cost up to the introduction of the dry law 22 cent, jumped after its introduction to the dollar and the dollar, and in the USSR after the shooting of Rokotov, Yakovlev and Faybishenko in 1961, the price of the dollar on the black market jumped several times.

However, not everything can be compared with monetary measures. So, if a person got sick here, then medical assistance was provided to him free of charge, and his salary remained at his place of work, if, of course, he was ill for no more than six months, then he was transferred to disability and paid a pension. You say that, on the other hand, the Americans had unemployment benefits. Yes, unemployment benefits were not paid by us - those who were unemployed were imprisoned for parasitism, because everyone who wished was taken to work with their hands and feet. But, most importantly, our man did not have his main current shortage - the lack of money. On the contrary, there was so much money that there was not enough goods — industry and transport did not have time to meet effective demand. But even if we take on faith that thesis that we lived worse, this does not explain our defeat, because during the Patriotic War the Germans lived much better than we, but, nevertheless, we won the Patriotic War and won even if the allies in Europe had not landed.

Why then did we lose the Cold War?

We lost it on the ideological front. As Professor Preobrazhensky said, the devastation is not in the closet, but in the head. Western specialists in psychological warfare managed to create devastation in the minds of Soviet citizens. The means of creating this devastation were rumors and gossip, which spread to the minds are not toothless old women. These rumors carried in themselves information that the West supposedly lives better than us. There are jokes that ridicule love of country, honesty and integrity. As a result, by the beginning of 80, young people paid 200 rubles (263 dollars) for “Montana” jeans, which cost thirty years in America, and bought dollars for 6-7 rubles,officially cost 70 centsbut really 18 cop. But, most importantly, the average representative of Soviet youth began to dream of fleeing to the West and living there “as a human being”. And there was no real opposition to these rumors and gossip. It was not because there was a shortage of humanitarian personnel in the country - the very ones from which soldiers of psychological war are recruited. If national culture is strong, then the people with pitchforks and spears will defeat any opponent. If the culture cracks, then national identity is lost, and such a decayed ethnos can be taken barehanded. But there was no one to support the culture. The ideologists of the party and Komsomol apparatus were engaged in Marxist-Leninist scholasticism divorced from the present, incapable of being an ideological rival of advanced psi technologies in the era of the scientific and technological revolution.

Instead of skillfully refuting the theses of the enemy, they simply jammed the Voice of America, while achieving the opposite effect - in our country they love everything forbidden. The correspondent of CT in the United States, Vladimir Dunaev, was never instructed to make a report on the hard life of immigrants. Instead, Dunayev showed the 218-day hunger strike of Dr. Haider, who has not lost weight in these months, and Heinrich Borovik made a film about Joe Mauri, an unemployed person who is being evicted from 5 Avenue, one of the most expensive streets in New York. The latter, on the contrary, turned out to be an advertisement of America: “... even the homeless go there in jeans!”. Interviews with disappointed returnees also showed, and many were not allowed to return. Therefore, when the question of whether or not the USSR was to be decided, everyone went to defend the White House, and no one went to defend the Red Kremlin.

We are in Yandex Zen
What we lost
Why did we lose the Cold War?
37 comments
Information
Dear reader, to leave comments on the publication, you must to register.