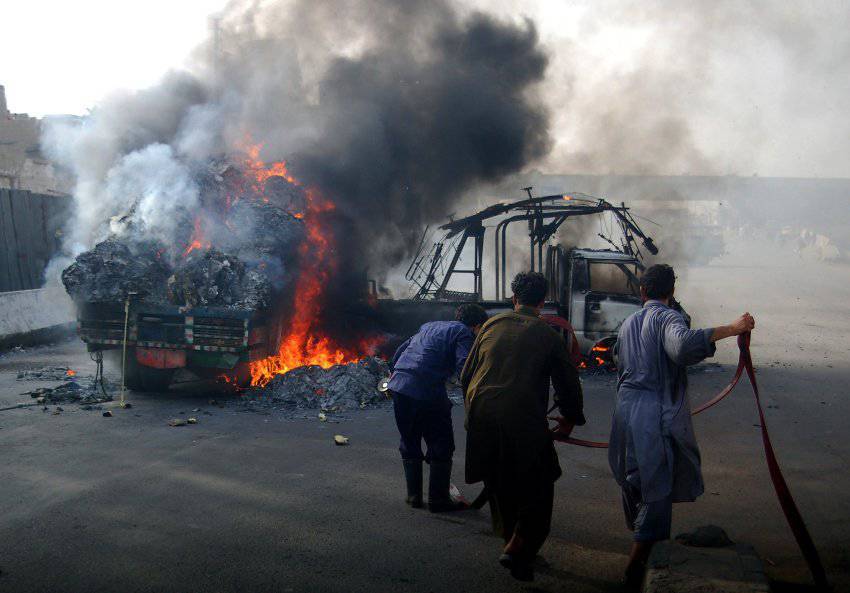 Pakistan is on the verge of another large-scale split: in the financial capital of the country, Karachi, fighting of street gangs has been going on for several weeks using machine guns, grenade launchers and even mortars. Behind the gangs are ethnic political parties. The army and police are trying not to interfere in the ethnopolitics.


Karachi has always been considered one of the most explosive cities in the country, which has long been a conglomeration of areas weakly controlled by the central government. It is enough to mention that the Islamic emirate of Waziristan (controlled by the Taliban) still exists in the Afghan borderland in Pakistan, the destruction of which is claimed by the official authorities every year, and the so-called Pashtun tribes there are practically independent micro-states.

All история “Independent” Pakistan is a rather awkward balance between the interests of various political and ethnic groups. As soon as it is violated, the country rolls into another strip of chaos and violence. Now Karachi has become the epicenter of another such wave - the Pakistani "Moscow" with a population of 18 million people and a population density of up to 4000 people per 1 square kilometer (however, it still is 2,6 times lower than in Moscow). Since January of this year, clashes of street gangs began in the metropolis, which by August had escalated into real battles.

The reason was the confrontation between the “Pashtun” party, the National Party of Awami (NPA) and the Muttahida Qayumi Movement (MQM), representing the interests of the Urdu-speaking population (many of them are migrants from India). In Karachi, according to the latest data, about 45% of the population speak Urdu and 25% speak Pashtun dialects. And the number of Pashtuns in the city is growing steadily. This and decided to use the PPA. Moreover, the distribution of seats in the regional parliament (assembly) for it is clearly underestimated - from the 168 seats, the representatives of the PPA occupy the entire 2, whereas in the MQM - 51. The rest belong to the counterpart of "United Russia" and ONF - Pakistan People’s Party (PNP), although the party does not enjoy popularity in Karachi (Pakistan still has unsuccessful construction of a “single multinational Pakistani nation”). It is also noteworthy that the MQM and the NLA are included in the PNP alliance, but this does not in the least prevent their supporters from killing each other.

Each political party in Pakistan is the tip of the iceberg of local ethno-democracy. On its lower floors are "own" mafias, groups of fighters, merchants weapons and drugs, racketeers, “own” police units, and so on, to specific communities. A completely common practice in building sovereign ethno-democracy in Pakistan is the recruitment of parties to the services of kidnappers, professional extortionists, assassins or sorcerers.

The desire of the NLA to gain more weight in the regional policy and to take control of a number of businesses that "protects" the MQM, and became the cause of the conflict. The leadership of the MQM, by the way, accuses the central authorities of indulging their opponents. Thus, the reason for discontent was the arrest in Karachi of the well-known hired killer Muhammad Ishtaki in the country, who during interrogation confessed to “work” on the Muttahid Qaumi Movement. Another well-known killer, Amzhal Pahari, said he had killed more than 100 people on the orders of the MQM. However, party functionaries have stated that these unworthy people are already excluded from the movement (which somewhat resembles Russia, where the "silovik" who committed the crime, in hindsight, is sometimes excluded from the department).

According to various estimates, since the beginning of this year in Karachi, which the warring parties have divided into two parts, killed from 500 to 1000 people. About a hundred more were missing. The central government accuses the intrigues of the Taliban, and the army was instructed to take control of a number of blocks of the city. However, Pakistani “siloviki” try not to interfere in the dismantling of ethno-political gangs - because then it will be difficult to avoid a full-scale civil war in a city full of weapons.