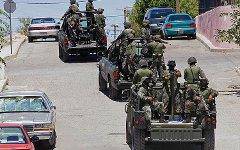 Several thousand security officials in the north-east of Mexico in the city of Monterrey in 160 kilometers from the US border. Authorities are looking for criminals who set fire to the casino "Royal" 25 in August, where more than 50 people were burned alive or suffocated, and at the same time carried out raids on other gambling establishments.


The Federal Police of Mexico deployed a thousand and a half policemen in Monterrey. Another fifteen hundred fighters were sent here by the government army. In addition, as reported by Fox News, several Black Hawk helicopters will be deployed in the city.

“We are not faced with ordinary criminals. We are dealing with real terrorists who have crossed all borders, ”said President Felipe Calderon on national television, declaring three days of mourning. He said that this attack was the worst for the newest history.

On Thursday, 25 August, in the casino "Royal" in the northern city of Monterrey with a population of more than four million people, eight or nine people broke in with cans in their hands. Two or three minutes later, the building flared up and the attackers disappeared in four cars. This was filmed by surveillance cameras.

Police later found inside the body of 35 men, 10 women and seven bodies of indeterminate sex - they burned so badly, the newspaper Detroit Press writes. People were burning almost alive, because when they left, the attackers blocked the exits. Some died in utility rooms and toilets. According to the investigators, they fled from the shootout, which ensued as soon as the attackers broke into the casino - gunshot wounds were found in some of the dead.

The crime shocked the whole of Mexico, because the dead were not implicated in the wars of the drug cartels, who allegedly staged the massacre. Mostly middle-class people went to this gambling club - they had nothing to do with the power structures or the mafia.

A large number of victims were also caused by the fact that casino emergency exits were locked to the castle, which caused questions to the club owners. Official representatives of the company do not hide the names of the directors, but the authorities are confident that the real business owners do not appear in the documents. Their identities are being established.

Already on Friday, raids began at other Monterrey casinos - in two days the police found violations in the 12 gambling clubs, in addition to the burnt ones, were confiscated around the 1500 gaming machines.

The police have not yet put forward the official versions of who could have committed this crime, but in Monterrey, the Cartel Golf and its former unit Los Zetas are fighting for spheres of influence, founded by the former military and eventually becoming a real army with even heavy weapons. Mafia is often engaged in extortion and there are not rare cases when the property of recalcitrant businessmen eventually burns down in fires for unidentified reasons. However, the administration of the casino "Royal" assures that it did not receive any threats from drug cartels.

One of the main clues of the police - identikits of three of the attackers, who managed to make up the testimony of sixteen people who survived the attack. The president announced a 2,4 million-dollar reward for information that will help reach the attackers. However, it has not brought any fruit yet.

We are in Yandex Zen
Serbia sent contingent of peacekeepers to Cyprus
Attack helicopter armament
4 comments
Information
Dear reader, to leave comments on the publication, you must to register.