October 5 2013
56
In the 80 of the last century in the USSR, the development of a new complex of coastal defense based on promising anti-ship missiles at the time began to replace the Redut and Rubezh complexes. The new mobile coastal missile system (PBRK) was named the Bastion. In view of the collapse of the USSR, it was possible to bring the development of the complex to an end only in recent years. After the launch of the production of this complex, Russia has become a leader in the market for the production of coastal anti-ship complexes and will apparently retain this leadership for the coming decades.


The Bastion PBRK was developed by the NPO Mashinostroyenia based on the latest supersonic anti-ship missile 3М55 Onyx (the export name Yakhont, according to NATO classification SS-N-26 Strobile) with a range of up to 300 km. The complex "Bastion" is offered in two versions of the mobile "Bastion-P" and stationary "Bastion-S". The mobile complex includes 4 mobile launchers on the MZKT-7930 chassis (2 missiles on PU), a control vehicle, transport-charging machines, and can additionally use targeting machines with the Monolit-B RLK.

In 2006, a contract was signed for the supply of one Bastion-P complex to Vietnam (the cost of 150 million dollars) and two complexes to Syria. The Vietnamese contract is fulfilled today. In fact, it was possible to pay the final part of the R & D with the money from this contract. The second export customer was Syria, which signed a contract for the supply of two complexes in 2007. The widest demand for these complexes is expected in the region of Southeast Asia. At present, the states of this region have begun to substantially increase their fleets. In this case, the Russian PBRK intended for the destruction of surface ships of various classes and types, both as part of the formations and as single targets, will be in high demand. Currently, Vietnam has already begun negotiations on the further supply of these complexes. 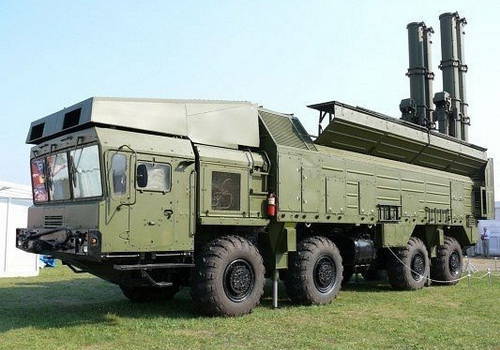 In 2008, the Ministry of Defense of Russia issued a contract for the supply of mechanical engineering to 3 Bastion-P 3K55 complexes to equip the 11th separate rocket and artillery brigade of the Black Sea fleetstationed near Anapa. The last FGP was handed over to the team earlier this year. All three PBCs are consolidated into a separate division.

The Bastion mobile coastal missile system (PBRK) armed with a unified supersonic Onyx anti-ship missile is designed to destroy surface ships of all classes and types from ship and aircraft carrier strike groups, airborne formations, convoys, as well as individual single ships and ground radio contrast targets in the conditions of intensive radio-electronic and fire counteraction of the enemy. This complex is able to protect the coastline over a length of more than 600 km from possible landing operations of the enemy.

The time from receipt of the order on the march to full deployment in combat positions is 5 minutes, after which the complex is fully ready for firing. The position of the complex can be removed from the coastline at 200 kilometers. After its deployment, PBKP can remain fully operational for 3-5 days, depending on the available fuel reserves.

The composition of PBRK "Bastion" includes:

- Self-propelled PU K-340P based on the MZKT-7930 "Astrologer" (crew - 3 person);
- Onyx anti-ship missiles in transport and launch containers;
- Combat control vehicle K-380Р based on KAMAZ-43101 (crew - human 4);
- Automated system of combat control of the complex;
- Equipment information and technical interface of combat equipment of the complex with the head command post;
- A set of maintenance tools.

In addition to PBRK "Bastion" can be supplied:

The self-propelled PU K-340P was created on the basis of the four-axis chassis MZKT-7930 "Astrologer" and is capable of speeding up to 70 km / h on the highway. The power reserve is up to 1000 km. The total mass of the launcher with 2-i equipped transport and launch containers, filled with tanks and a crew of three people is 41 ton. The commander of the car, the start-up operator and the driver are placed in the cabin of the installation, equipped with air conditioning. To prepare missiles for launch, transport and launch containers are moved to a vertical state. The launch interval for salvo firing from one launcher ranges from 2 to 5 seconds. 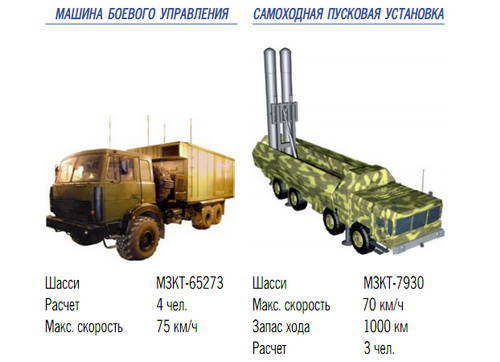 The combat command vehicle of the K380P complex is manufactured on the basis of the KAMAZ-43101 or MZKT-65273 three-axle chassis. All the necessary equipment is mounted in the ISO-1C container, the total weight of the vehicle with fuel and fuel is 25 tons, the deployment time to the combat state is 3-4 minutes.

The transport-charging machine K342P is made on the same chassis as the PU. The calculation of its 2 person, on the machine are located 2 transport-launch container with missiles, as well as a crane with a lifting capacity of 5,9 tons, which is used to reload the launcher and load missiles.

Anti-ship missile (ASM) "Onyx" is placed in a special sealed transport and launch container. In it, the rocket, being fully ready for combat use, leaves the manufacturer, stored, transported and fed to the PU. The technical condition of the rocket and its systems can be monitored without being removed from the container through a specially provided onboard connector. The transport and launch container is quite unpretentious in operation, does not require the supply of gas and liquid, does not impose additional requirements on the microclimate on the media and in storage areas. All this not only simplifies the operation of the rocket, but also serves as a guarantee of its high reliability.

The main features of the Onyx rocket are: full autonomy of its combat use (the principle of “fired and forgotten”), high supersonic speeds on all flight segments, a set of flexible flight paths, complete unification of the rocket for a wide range of carriers (ground-level PUs, surface ships of all classes , submarines), low visibility of the rocket for modern radar.

RCC "Onyx" made by the normal aerodynamic configuration and has a trapezoidal folding wing and tail. High thrust-to-weight ratio along with good aerodynamics of the airframe provide the rocket with excellent maneuverability, which allows Onyx to carry out effective maneuvers of evading enemy fire weapons.

The power plant "Onyx" includes a marching supersonic ramjet with an integral starting solid-fuel accelerator. The rocket engine is designed for marching at speeds in 2,0-3,5 mach in a wide range of heights from 0 to 20 000 meters. 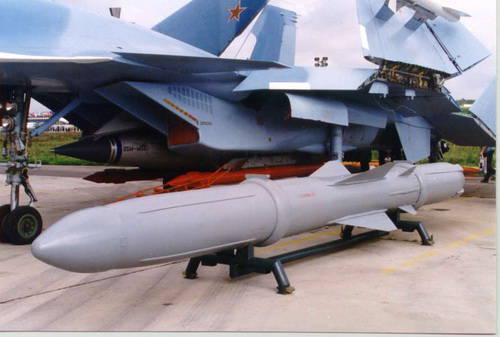 In fact, the whole RCC - from the frontal air intake to the nozzle section, is a power plant organically combined with a glider. The exception is the central cone of the air intake. It contains: a warhead, a radar homing antenna, control system units. All free internal cavities of “Onyx”, including the air path of a ramjet engine, are used for fuel storage and the built-in solid-fuel start-up stage.

After the rocket leaves the launch canister, a solid propellant accelerator unit is mounted, mounted according to the “matryoshka” principle right in the combustion chamber of the cruise engine. Within a few seconds of operation, the accelerating unit accelerates the rocket to speed in 2 mach, then the starter accelerator shuts off, throws it out of the main engine with air flow, and Onyx continues to fly at speed in 2,5 mach, using a ramjet engine.

“Onyx” is equipped with a combined target guidance system (an inertial trajectory on the cruise and an active radar target - in the final phase of the flight). The flight mission of the rocket is formed according to data obtained from an autonomous source of target designation. A homing radar mounted on a rocket is capable of capturing a surface cruiser target at a distance of up to 75 km.

After the initial target acquisition, Onyx turns off its radar station and makes a reduction to extremely low altitude (of the order of 5-10 meters). As a result, in the middle of its flight, the rocket is below the boundary of the enemy’s air defense. Later, after the rocket leaves the radio horizon, the radar re-starts, captures and accompanies the target, which the rocket is aimed at. On this relatively small part of the flight, the supersonic speed of the Onyx will greatly impede the possibility of short-range anti-aircraft defense, as well as the possibility of jamming its homing head. 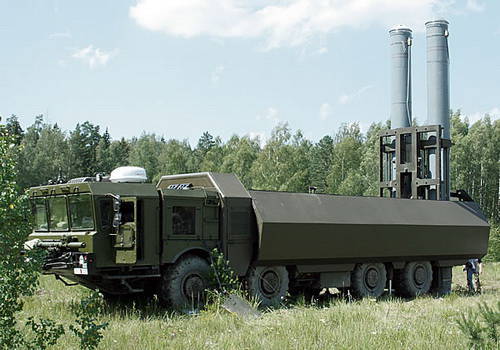 An overview of the entire affected area from a high altitude creates all the conditions for the preliminary targeting of missiles to individual ships of the group and the selection of false targets. One of the main advantages of the Onyx missiles is their target targeting program, which allows you to act against one ship on the principle of “one rocket - one ship” or opposite “flock” against a warrant of ships. It is in terms of salvo use that all the tactical capabilities of the Bastion-P complex and its main striking force are fully disclosed. The missiles launched are capable of distributing and qualifying targets themselves according to their importance, choosing attack tactics and a plan for its implementation.

The onyx autonomous control system contains not only data on counteraction of EW, but also methods of evading various enemy air defense systems. After the destruction of the main target in the order, the remaining missiles attack other ships, eliminating the possibility of the same target attacking with two missiles. In order to eliminate possible errors in the defeat of a given target and the choice of maneuver, electronic portraits of all existing modern classes of ships are incorporated into the onboard computing system of the rocket. In addition, it also contains tactical information, for example, about the type of ships, which allows the rocket itself to determine what purpose it has — the aircraft carrier, the landing party, the convoy, and attack its main targets.

An early reduction of CRP based on the maintenance of the radio horizon relative to the target being shot allows disrupting the rocket escort with air defense firing systems, which, together with a very high supersonic speed and extremely low rocket altitude in the homing area, significantly reduces the ability of its most intercepted air defense systems.