At the Zelenodolsk plant named after A.M. Gorky will be laying the third RTOs of the Buyan 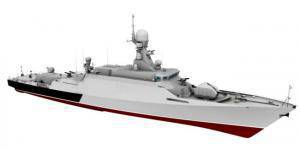 On August 27, 2011, a solemn laying ceremony of the Veliky Ustyug small missile ship, the third serial ship of project 21631 developed by Zelenodolsk Design Bureau, will be held. Designed for Naval fleet Of Russia. The purpose of the small missile ships of this project is to protect and protect the economic zone of the state. In contrast to its prototype - a small artillery ship of project 21630 - MRK has almost twice as much displacement.


The lead ship of this project was laid on 27 August 2010 of the year, on the eve of the Day of the Republic of Tatarstan, and received the name "Grad Sviyazhsk". The second order of the same project, laid out on 22 July 2011, is given the name "Uglich". Among the distinguished guests at the tab of the second ship were Prime Minister of the Republic of Tatarstan Ildar Khalikov, as well as Rear-Admiral Sergei Alekminsky, commander of the Caspian Flotilla, who, congratulating the factory workers, said: "Today we are at the tab of another unique ship, which is in its class the best, the most advanced. Having passed through the plant, through the workshops, having assessed your capabilities, I hope that the time period for the construction of ships will be reduced, because the Navy needs such ships very much. "

And here the third serial ship of this project is born.

Small rocket ships of the 21631 project are multi-purpose ships of the river-sea class, equipped with the most modern models of artillery, rocket, anti-sabotage, anti-aircraft and radio engineering weapons, which allow strikes against both naval and ground targets.

Thanks to the government of the Republic of Tatarstan, Gorky people have large and promising orders. This year, the plant will have to hand over 5 ships, two of which have already been sent to Vietnam - these are the frigates of the project "Cheetah-3.9" (the designer is OAO Zelenodolsk PKB). The other day on the second ship took the flag of Vietnam.

Currently Zelenodolsk plant named after A.M. Gorky is the only shipbuilding enterprise in Russia that has launched the serial construction of high-speed passenger ships for river and sea use. Since 2006, the river fleet has received 5 units of comfortable ships of a new generation, created on the basis of the integration of shipbuilding and aviation technologies. Today, on the stocks of the plant, 2 units of A145 project vessels are being built, designed to serve guests and residents of the city of Sochi during the preparation and holding of the 2014 Olympics. In September, the first ship is to be presented at the X International Investment Forum in Sochi.

The ships of this project have a modern look, meet the safety requirements of navigation, meet international environmental standards. Being high-speed comfortable passenger vessels of the gliding type with automatically controlled movement dynamics ("mechanized bottom"), they replace the morally and physically obsolete SPK of the type "Meteor", "Komet", "Kolkhida", "Sunrise". The order is constructed in accordance with the requirements of the world-famous certification authority BUREAU VERITAS.

Zelenodolsk Plant named after AM Gorky, OJSC was recognized for its work at the Russian level - it was awarded the title “Best Russian Exporter of 2010 of the Year” in the shipbuilding field. The presentation of models of ships under construction and high-speed vessels, new projects of motor ships (A45-90, A45-4) aroused wide interest among the participants of the XV International Economic Forum and other prestigious exhibitions.

Over the past two years, shipbuilding has been intensively developing at the Gorky Zelenodolsk plant. The laying of new serial orders both for the Russian Navy and for friendly states through military-technical cooperation significantly improved the image of the plant as a dynamically developing shipbuilding enterprise.