Modest Kolerov: Heirs of Hitler’s allies, the USA, nationalists and “de-Stalinizers” in the EU are preparing “Nuremberg” against Russia 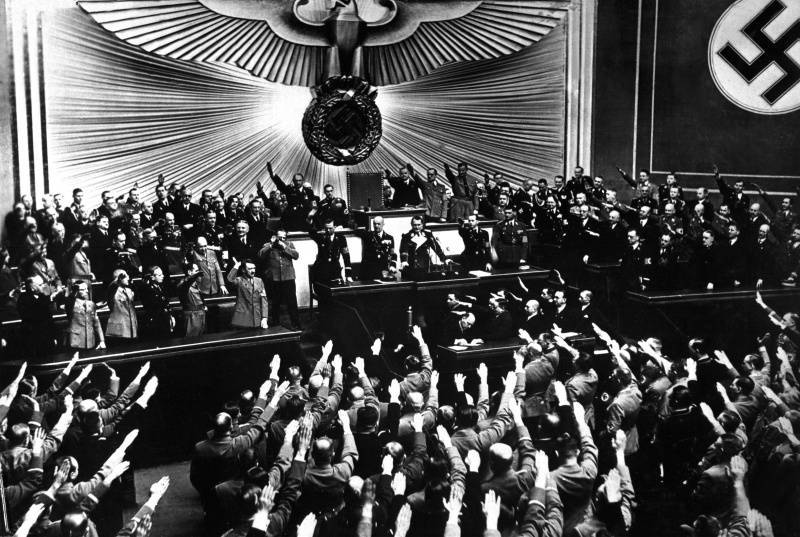 In accordance with the decision of the European Parliament, 23 on August 2011, on the anniversary of the signing of the Molotov-Ribbentrop pact between Germany and the USSR, the Day of Remembrance of the Victims of Totalitarianism was first celebrated in the EU countries. The Warsaw Conference of EU Ministers of Justice was held in Warsaw, the Warsaw Declaration was adopted. The US Embassy in Estonia placed equal responsibility for the start of the Second World War on Hitler Germany and the USSR. The candidate answers the questions of IA REGNUM historical Sciences Modest Kolerov:

If the decision of the European Parliament to establish the Day of Remembrance for the Victims of Totalitarianism still contained deaf reservations that, apart from totalitarian regimes on the eve of World War II, there were unnamed authoritarian regimes, under which, at the cost of additional explanatory efforts, it is possible to legitimately bring regimes in Latvia, Lithuania, Estonia, Hungary Italy, Romania, Poland, whose practice can also be condemned and whose victims should be mentioned, in the Warsaw Declaration of 23 in August 2011, the Russian translation of which is published An REGNUM news agency explicitly states only totalitarianism: "Europe suffered under totalitarian regimes, regardless of whether it was communism, national socialism or any other ... totalitarian regimes are responsible for most of the shameful acts of genocide, crimes against humanity and war crimes. .. the perpetrators will be brought to justice ... call upon the European network of contact points for persons responsible for genocide, crimes against humanity and war crimes to consider the issue of crimes committed by totalitarian regimes. " From this formula it follows that the allies of Hitler in these countries and the countries themselves are responsible for the genocide, etc., and even more so the allies of Hitler at the head of Finland, Spain, Portugal, France, and even more so the democratic authorities of England, France, USA who directly supported Hitler in his aggression to the East, in the direction of the USSR, are not subject to the declaration and the European Union justice.

In addition, the declaration directly sets the task, for the sake of execution of which, in fact, this whole game was started on Memorial Day: "true reconciliation (someone with whom is shyly silent, because this is about" reconciliation "of the EU with the enemy in the person of the USSR and Russia) which is the burden of the entire Soviet legacy - MK) is impossible without sincere and careful discussion and without the establishment of justice. " It is precisely the “justice” that the EU Ministers of Justice intend to establish. Not foreign ministers, not ministers of culture, but ministers of justice who frankly prepare and will prepare in union and absolute agreement with the Russian "pre-Stalinization" inquisition the new "Nuremberg process" now over Russia - which will certainly be awarded not only a large-scale reconciliation "with those with whom in the current EU she did not fight, but also large-scale reparations for the crimes of Stalinism, for the very existence of the USSR as a state, for the struggle of the USSR against Hitler’s democratic and authoritarian allies. And that means - it forces Russia to make political “reconciliation” with those on whose behalf the EU, it turns out, is speaking with Hitler’s allies. It is very important to understand that by setting the condition for “reconciliation” of the USSR / Russia with the EU countries, the European Union directly declares itself the heir of Hitler’s democratic and authoritarian allies, from which modern regimes directly and publicly conduct their genetics in modern countries in those countries whose representatives gathered in Warsaw 23 August 2011, celebrated Memorial Day and signed the Warsaw Declaration - the program of the new Nuremberg.

One must be a Russian idiot, “de-Stalinizing”, of modern Russia, or just a cynic and a traitor, in order not to “understand”: the ministers of justice of these New Europe countries are the direct nationalist and “democratic” heirs of Hitler's allies and collaborators. They did not, do not, and will not put before themselves questions of reconciliation, justice and retribution, for example, King Juan Carlos for the crimes of Franco, Benes, Pilsudski, Horthy, Mussolini, Chamberlain, Daladier, Mannerheim, Antonescu, Smetona , Ulmanisa, Patsa and others, whose "legitimacy" and legitimacy they strengthen their modern apartheid and selective, initially politically and economically motivated "memory policy". They will not introduce legal sanctions against those who praise and diminish the crimes of all these figures, they will not judge those who, executing their decisions, made millions of people in Europe victims of crime. All of these countries and regimes have not responded, are not responsible, and will not be responsible for their participation in the Holocaust, in the rarest cases limiting themselves with protocol apologies, and not realizing "justice" and "justice." I’m not even talking about that - even joining the EU - Croatia did not respond and is not responsible for the genocide of the Serbs, which it created during the Second World War.

What was the nature of the political regimes of Central and Eastern Europe in the 1930-1940 years that the USSR faced at its western borders?

As I have already said, in the person of Poland, Latvia, Lithuania, Estonia, Hungary, Romania, Bulgaria, the USSR dealt with nationalist dictatorships that carried out assimilation and anti-Semitic policies and therefore became Hitler’s natural allies, and won with the help of mass firing terror in civil war. in Finland, a regime that had stable imperialist territorial claims against the USSR.

What goals were pursued by these regimes in relation to the USSR?

The common goal of these regimes was the destruction of the USSR, the dismemberment of its territory, the redistribution of its resources among themselves. Such a goal was pursued by those who, at the head of the United States, Britain and France, pushed Hitler and the countries of Eastern Europe into a war against the USSR.

What political device was planned to be implemented by national movements, in the 1940-ies. who fought for independence from the USSR?

Only the state propaganda of the EU and the USA and the Russian official historian Chubaryan argue that the Second World War began with a non-aggression pact between Germany and the USSR 1939. Any researcher and student who does not seek personal profit in the accusation of the USSR knows: the division of Europe with Hitler, the "appeasement" of the aggressor at the expense of adjacent territories in the direction to the East, to the USSR, the division of neighboring countries with Hitler began Poland, Hungary, England, France and the USA. The Anschluss of Austria and the Munich Agreement of 1938, which dismembered Czechoslovakia, followed the apogee of their alliance with Hitler, after which any Stalinist foreign policy efforts of the USSR were attempts to postpone Hitler’s attack on the USSR and industrial centers, to avoid war on two fronts - with Germany and allied Japan (whose crimes, by the way, the EU does not "geographically" notice, but it is perfectly reconciled with the "European" pretensions of the countries of the Middle East her Asia).

What political device was planned to be implemented by national movements, in the 1940-ies. who fought for independence from the USSR?

The nationalist movements in Estonia, Latvia, Lithuania, and Ukraine, which fought for independence from the USSR, were by no means accidental allies of Hitler during World War II. Ideologically and practically they built pro-fascist, radical nationalist and anti-Semitic regimes, not only voluntarily participated in the genocide perpetrated by the Nazis, but frankly shared his ideological attitudes. The ideologies of class internationalism in the USSR were opposed not by "European values", which the heirs of these national movements in the Baltic States and Ukraine now swear, but by European Nazism, shared by all these movements. Therefore, only pigs can speak of the “European choice” of this Eastern European fascism, who see in their mirror reflections not the pig's eyes, but “the faces of democracy”.

Separately, it should be said about the ideology of the heirs of Pilsudski in Poland during the Second World War, the London emigre government of Poland and his Army Craiova. Already, their goal to return the 1772 border to Poland in the east clearly proves that they intended to continue the assimilatory, colonialist, nationalist and imperialist practices of Poland against Lithuanians, Belarusians and Ukrainians in their ethnographic territories. Israeli historians are also aware of mass anti-Semitism, which flourished in everyday life and the policy of the Polish army of Anders.

It is noteworthy that the already mentioned Warsaw Declaration prescribes "to support the activities of non-governmental organizations, including organizations from countries covered by the Eastern Partnership, which are actively involved in the study and collection of documentation related to crimes committed by totalitarian regimes." Translated into Russian practical language, this means that the political classes of Armenia, Azerbaijan, Georgia, Ukraine, Moldova, Belarus, trying, if not to join the EU, then at least feed in the EU, are explicitly stated to collect materials for the indictment of the new Nuremberg process "against Russia. This means that their revisionism, the justification of their Hitlerite collaborationists and the glorification of the “forest brothers”, “legionaries”, Bandera — just because they fought against the USSR — receive not only an indulgence from the EU, but also a direct task of practical Russophobia. Election, anti-Semitic and Russophobic, ie remove the responsibility from their Soviet leaders, national-communist nomenclature suverenizatorov, Kravchuk, Kuchma, yuschenok, Shushkevich, Beria, Demirchian, Shahumyan, Mikoyan Aliyeva Bagirov, Shevardnadze, Snegur Ruutel, Peters, Vacietis, brazauskas, Gorbunovs, etc., and limiting it only to respondents from modern Russia, “de-Stalinization” becomes a direct condition for their integration into the EU, against which “occupation museums” will seem childish prattle.

Why did the EU not condemn the Munich Agreement?

Because the EU as a whole and the ruling regimes especially in the new EU member states are direct heirs of those who concluded this Munich Agreement with Hitler, who were Hitler's ally in World War II, who fought against the anti-Hitler coalition in the ranks of nationalist collaborationist formations.

Ctrl Enter
Noticed a mistake Highlight text and press. Ctrl + Enter
We are
Kolerov: “We must respect the choice of the peoples of the Baltic and Transcaucasia, even if it leads them to death”Artashes Geghamyan: The strategy of dismembering Russia has already entered the hot phase
30 comments
Information
Dear reader, to leave comments on the publication, you must to register.