December 4 2014
4
27 November 2014 of the year at the shipyard owned by the shipbuilding company DSME, was the cutting ceremony of the first steel for the head of the new submarine of the South Korean Navy. This is a large diesel-electric submarine project KSS-III (program Jangbogo III). This information was published on 28 November in Navy Recognition. Under the Jangbogo III program, a new Korean submarine is to be launched in the 2018 year, its transfer to the country's Navy is scheduled for the end of the 2020 year, after conducting two-year sea trials. The second submarine of this project will be ready at the end of 2022 of the year.


It is already known that the diesel-electric submarines of the KSS-III project will be built in three series:

It is reported that the submarines of this project will be equipped with 6 launchers vertical launch. Doosan will create the launchers, and LIG Nex1 will launch missiles for them. At the beginning of 2014, the Spanish company INDRA was named Pegaso supplier of electronic warfare system, and the development of a control system weapons Babcock from the UK will be working on the KSS-III’s first series submarines. In addition, an official announcement was made at Euronaval 2014 that Sagem will supply optical-electronic periscopes for this project, and Thales will provide side acoustic antennas to South Korean company LIG Nex1. In addition, LIG ​​will present its command and control system for ships of the KSS-III project. Also, the submarine will receive lithium-ion batteries of South Korean production. In general, the project seems to be quite international. 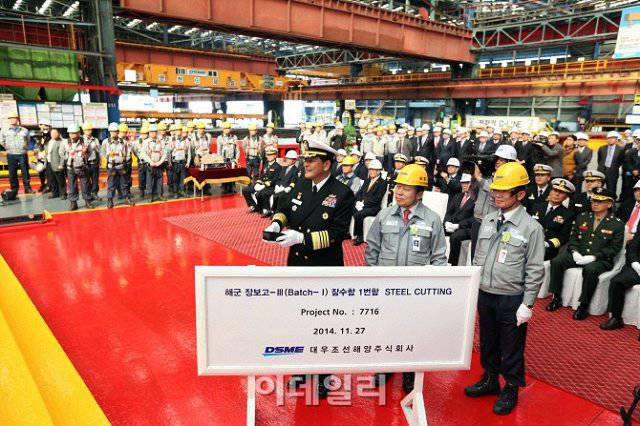 Design work on the creation of a large (with surface displacement exceeding 3000 tons) non-nuclear submarine of the KSS-III project in the interests of the South Korean Navy has been carried out since 2004. Work is carried out jointly by two major Korean corporations DSME and Hyundai Heavy Industries. In addition to them, Hanwha, LIG ​​Nex1, STX Engine and Samsung Thales are working on the project. Technical assistance in the design was provided by the BMT company from the UK. Initially, South Korea even considered the option of creating an atomic submarine, but in the end it was decided to abandon this idea. As a result, the boat received an air-independent power plant, which is similar to that installed on those under construction for the South Korean fleet German submarines of the Type 214 project (KSS-II). The use of a modern air-independent power plant allows an underwater missile carrier to independently perform various combat missions in an underwater position for 50 days, as well as reduce the visibility of the submarine in the acoustic range.

According to preliminary information, the submarines of the KSS-III project were planned to be equipped with vertical launch ballistic missiles. According to one version, it can be Cheonryong ballistic missiles that are able to hit a target at a distance of up to 500 km. This missile is being developed on the basis of the Hyunmoo III-A ballistic missile, which is produced by the South Korean Defense Development Agency (ADD) and LIG Nex1. It is reported that in addition to the KSS-III submarines, the Cheonryong missile should become the main armament for the Type 214 submarines, which in South Korea are licensed by the German company HDW to Huyndai Heavy Industries.

In total, by the 2029, the South Korean Navy plans to have 9 new submarines of the KSS-III project. These ships should come to replace the German diesel-electric submarines of the 209 / 1200 project built by 1980-90-s currently in the fleet. At the same time, the submarine construction program of the KSS-III project in recent years has repeatedly undergone changes, it was delayed for financial and technical reasons. In the end, the Ministry of Defense of the Republic of Korea decided to issue an initial contract for the construction of only two combat ships of the first series KSS-III project, previously it was planned that the ships of the first series would have three pieces. If we talk about the submarine fleet of South Korea as a whole, now it consists of 9 submarines of the Type 209 project and four Type 214 projects, while the 5 Type 214 boats are at different stages of construction. 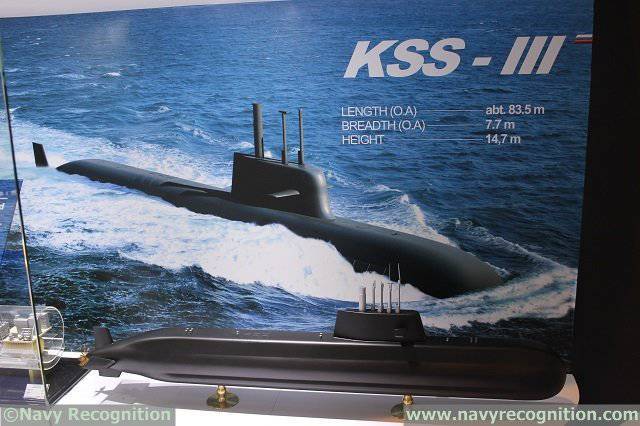 Curiously, the South Korean Defense Ministry "turned its face" to the submarine fleet relatively recently. The decision to create a submarine command in the country's Navy was taken only in 2012. According to the publication The Korea Herald, which referred to the representative of the National Defense Committee of the Korean Parliament, the creation of an undersea command in the Navy 2012 million won (639 thousand US dollars) in the country's budget 565 of the year.

The need to create a special submarine command in the country is explained by the fact that the South Korean Ministry of Defense submarines are classified as strategic weapons. Initially, South Korea planned to create such a command already in 2012, but this project turned out to be frozen.