The failed bullpup in the Soviet way, or the Korobov TKB-022 machine gun 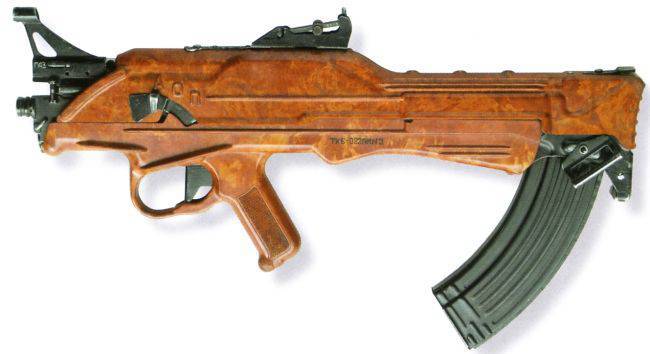 After the end of the Second World War, to participate in the competition for a new rifle weapon Soviet Soviet, gunsmith designer German Alexandrovich Korobov began developing the TKB-408 submachine gun chambered for the 7.62x39 mm, built in a bullpup layout. However, the Korobov TKB-408 submachine gun dropped out of the competition, and the AK-47 Kalashnikov assault rifle was adopted.

After the TKB-408 machine gun was rejected, Korobov for a while refused the weapon in the bullpup layout, but at the beginning of 1960-s again returned to it, creating a whole family of machine guns under the symbol TKB-022 (TKB - Tula Design Bureau), however, each new sample was significantly different from the previous one.

The new family of the TKB-022 submachine gun includes models:

At the beginning of 1961, a topic was opened in the USSR aimed at developing new schemes for machine guns and machine guns, as well as searching for more advanced principles of automation. Samples should have a simple design, low weight and be reliable in operation.

The TKB-022 machine gun is built according to a rather unusual pistol layout for machine guns, in which the magazine is located in the fire control grip. The weapons used automatic with the removal of powder gases from the barrel. The shutter is rotary. The bolt carrier with a bolt has a short stroke, and the ring piston located on the barrel has a long recoil stroke. The bolt and piston are automatically detachable.

The ejection of the sleeves was made only on the right side of the weapon. USM allows for both single and automatic fire. One of the distinguishing features is the widespread use of plastic. The body of the weapon was a plastic "case", revealing two halves.

During the fire tests of the TKB-022 submachine gun, when shooting from the 1 - 13350 sample of shots and from the 3 - 3036 sample of the shots, there were no delays, and the accuracy of fire was not inferior to AKM, but the "space" design, using unusual for that the time of plastic and the reflection of the sleeves in the face of the arrow in the management of fire from the left shoulder is not allowed to adopt it.

The TKB-022P machine gun was notable for the wide use of plastics in the manufacture of the case, which was a huge step forward for that time. The TKB-022P light machine gun in terms of design, use of new materials and assembly without laborious fitting work was a completely new, original solution, however, the release of the sleeves was made only on the right side.

The mass of TKB-022P without a magazine was 2,5 kg with the length of the weapon 635 mm, and in terms of the accuracy of fire, the new weapon was not inferior to the Kalashnikov AKM.

Continuing work on the creation of a light machine gun chambered for 7,62x39 mm, Korobov upgrades TKB-022P and creates TKB-022PM machine model 1 and No. 2 to improve the accuracy of combat when shooting with automatic fire from an unstable position. 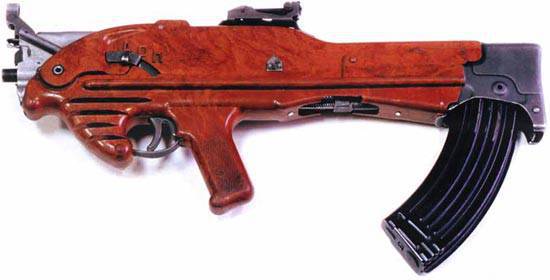 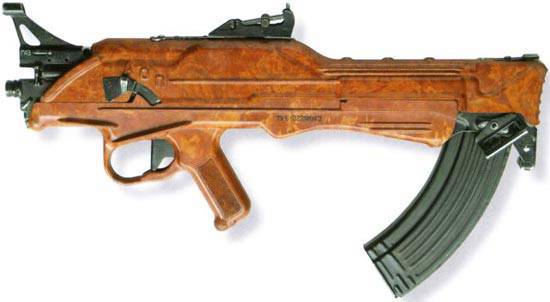 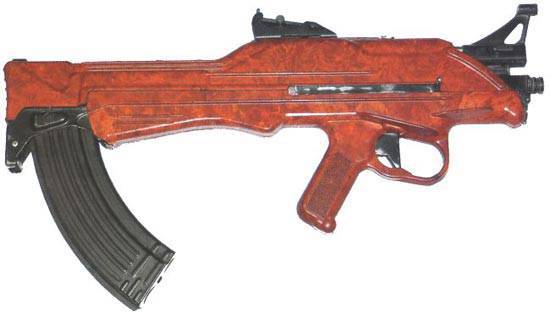 In addition to compact dimensions, the TKB-022PM machine gun was distinguished by very advanced solutions at that time — apart from the plastic case, the release of spent cartridges and the output of powder gases were made forward at the muzzle of the weapon, which ensured firing from both the right and left shoulder.

The TKB-022PM assault rifle used vapor-automatic equipment with an annular gas piston located around the barrel. Locking the barrel is provided by a wedge bolt sliding in a vertical plane, which, on the one hand, made it possible to shorten the length of the receiver as much as possible, and on the other hand, it required the introduction of an additional part — a dispenser / extractor. This U-shaped piece, moving in the horizontal plane back and forth, is responsible for filing the cartridge into the chamber, removing the spent cartridge case from the barrel and sending the cartridge into the output tube above the barrel, through which the sleeve falls into the front of the weapon. flies. 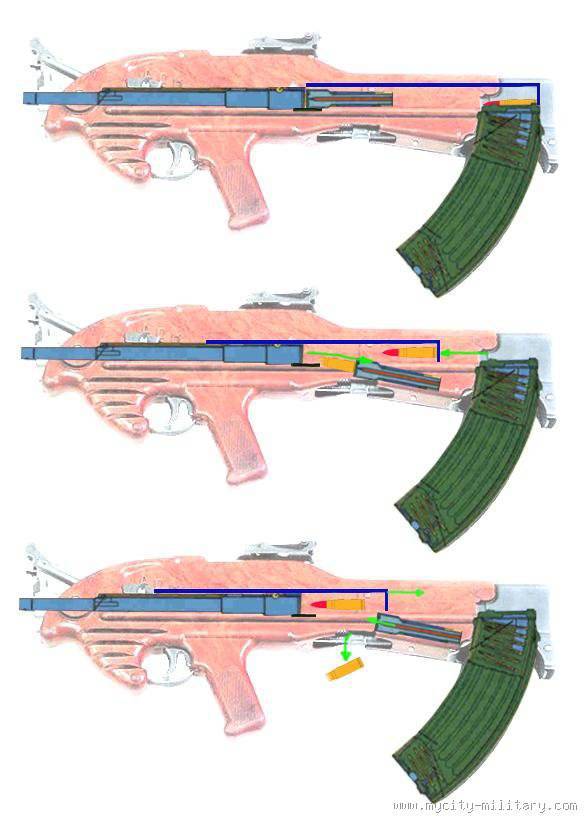 On the barrel of the machine it is possible to install a muzzle attachment for throwing rifle grenades. Accordingly, the weapon had a manually switched on valve that blocked the gas outlet when firing rifle grenades.


Fuse-translator fire modes located on the left above the pistol grip fire control.
To power the TKB-022PM ammunition, regular AKM autos on 30 cartridges from the Kalashnikov submachine gun are used, which are installed directly in front of the back plate.
The body of the weapon is made of plastic with metal inserts.
TKB-022 PM open sights are adjustable. At the same time the length of the sighting line was relatively small.

The fire tests of TKB-022PM No. 1 confirmed its high reliability. With automatic firing from an unstable position, the machine gun showed accuracy of fire three times higher than AKM. The mass of the TKB-022PM submachine gun No. 1 without a magazine was 2,8 kg with a weapon length 525 mm. Further improvement of TKB-022PM manufacturing technology, including on the basis of model No. 1, and the use of new materials made it possible to reduce the weight of TKB-022PM No. 2 from kg 2,8 to 2,34 kg.

Subsequently, on the basis of the TKB-022PM automaton, Korobov created the TKB-022PM5 submachine gun under the new promising at that time cartridge 5,6x39 mm.

The design of the TKB-022PM5 was similar to the TKB-022PM submachine gun, and tests carried out showed that the accuracy of firing from this weapon from the “lying down” position at the 100 m range is better than that of the AKM standard automaton.

Tests have confirmed the high reliability of TKB-022PM, however, Korobov’s automatic machines remained only as prototypes, which were affected by both objective reasons (for example, the offset center of gravity to the back of the weapon and the durability of the plastic case during long-term operation under difficult conditions and storage ) and subjective reasons (the military leadership responsible for adopting weapons into service was very conservative and did not welcome radical changes). In addition, the AKM machine gun was already quite well mastered by the production in the troops.