The war in Libya continues. On the actions of NATO forces 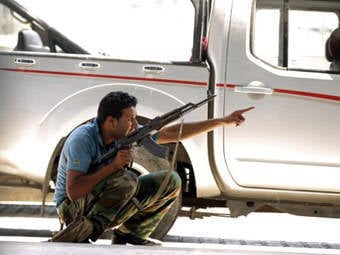 Despite the feverish efforts of the Libyan opposition and the Western press, diplomats show the world that the war as a whole is over, it is not. The legitimate government and the loyal forces of Gaddafi continue to resist. So, 25 August came several reports that talk about the continuation of the war: the Libyan government forces conducted a successful military operation against rebel forces, which were sent to the city of Sirte, the Associated Press reported. According to the agency, in the area of ​​the Bin-Javad settlement, Gaddafi’s supporters set up an ambush in which a column of insurgents fell. During the battle, at least two dozen rebels were killed, the rest rushed to the direction of the city of Ras Lanuf. According to the newspaper The Daily Telegraph, the conditional front line now runs precisely in the area between these two settlements. Opposition forces are trying not to engage in direct combat. As it is known, the Libyan leader Muammar Gaddafi was born in the vicinity of the city of Sirte, therefore, traditionally, he has strong positions in this area. Countrymen dictator are his most loyal supporters. According to the opposition, it is in the area of ​​the city of Sirte that all who are still faithful to Gaddafi are concentrated.


The clashes in the Libyan capital itself are not completed, according to Reuters, opposition forces continue to storm several buildings in the very center of the city, perhaps Gadhafi’s family members are hiding there, the defenders are not giving up, offering stubborn resistance. So, the battles are in the vicinity of the hotel "Corinthia"

According to the French edition of the Paris Match, the attempt to capture Gaddafi in Tripoli failed. August 24 received a message about the exact location of the Libyan leader. The divisions of the Arab special services (apparently, AOE and Qatar) arrived at the Colonel’s probable shelter, but he had already left. This is one more confirmation of the fact that the UN resolution was violated; external forces units took part in the storming of the Libyan capital. Earlier it was reported that the special forces of the United Arab Emirates and Qatar participated in the storming of the Bab Al-Azizia government complex. "This is an Arab affair, so it’s right that the Arab allies came to the aid of the Libyans," the special forces officer quoted The Evening Standard newspaper as saying.

In the evening, 25 August leader of Libya Muammar Gaddafi made an audio message to compatriots in the evening, in which he called them to continue the struggle, Al-Jazeera reported. In particular, Gaddafi called on "men, women and children" to clean the capital of the country from the rebels, and the tribes of Libya - "to continue to fight against foreign intervention." The colonel also expressed the opinion that he was still supported by the “overwhelming majority” of Libyan citizens who would not add up. weapon and will continue to fight the rebels.

In addition, the Libyan government spokesman Musa Ibrahim, in a telephone conversation with the Associated Press, said that the leader of the Libyan Jamahiriya was alive and well, did not run away from the country and continues to lead the battle for "freedom and independence." According to Musa Ibrahim, Gaddafi is in good spirits, and all his relatives are safe, intact and not arrested, as previously reported by Western media. Gaddafi and his supporters are “ready to continue the struggle for weeks, months and years,” the Libyan government spokesman added. At the same time, Gaddafi’s comrade-in-arms declined to say where he is located, as well as where Gaddafi and his family are, but said that the regime still has “a significant part” of the Libyan capital.

In principle, the rebels confirmed that Tripoli was not fully taken yet, saying that only a few blocks of the city remained in the hands of Gaddafi’s supporters. The appeal of the Libyan leader to his people was broadcast by the Syrian TV channel Al-Uruba. It is unknown whether it was live or recorded.

The North Atlantic Alliance declared that it would continue the military operation in Libya until the complete defeat of the forces of Libyan leader Muammar Gaddafi. This was stated by NATO Secretary General Anders Fogh Rasmussen. “It’s hard to imagine that attacks on civilians will stop as long as Gaddafi remains in power or claims to do so,” said August 25 Alliance Secretary General, giving an interview to the BBC.

Meanwhile, as the Military Outlook has already reported, the Alliance’s forces operate in the Libyan state, not only supporting the Libyan opposition from the air, but also on the ground, which is a violation of international agreements. Thus, the assault on the Libyan capital was carried out by NATO units (including the so-called private military companies, although all of them are under the control of official structures) with the participation of Arab mercenaries from Qatar, the United Arab Emirates and Jordan. 24 August this fact was first recognized by representatives of the British military department. In addition, at present, fighters from the Special Air Service of England (SAS), who were dressed in local clothes and equipped with local weapons, are searching for the leader Gaddafi.

British journalists from The Guardian proudly told the world that it was the English elite special forces that played a major role in the assault on Tripoli. Namely - the 22 th regiment of SAS (it acts in the interests of the foreign intelligence of England - Mi 6), which is responsible for offensive-assault operations, anti-revolutionary and anti-terrorist actions. This information was confirmed by other British publications, citing sources in the depths of the Ministry of Defense of England. According to them, at the present time, the fighters of the English division are looking for "Libyan Sauron." In order to hide their stay in Libya, the British soldiers dressed in Arabic clothing, armed with "Kalash". This is not the first message about the participation of British units in this war, in late February, journalists learned about the attacks of SAS units against workers of the Libyan oil industry in the south of the state.

Other countries, including “democratic” France, have not yet recognized the fact of the participation of their units in the assault on Tripoli. But the British journalists had already set everyone up - they reported that in the operation "Dawn of the Mermaid" there participated, in addition to British fighters, special forces units from the "democratic" Qatar, the United Arab Emirates, as well as some Eastern European countries and France. So, Misrata was protected from the forces of Gaddafi not only by the Libyan rebels, but the SAS soldiers and the French gendarmerie intervention group (GIGN, fr. Groupe d'Intervention de la Gendarmerie Nationale) were thrown to their aid. This elite anti-terrorism unit of the French gendarmerie is a detachment of the army, not the police.

It was reported that the assault on the city had been prepared for a long time. Back in May, they began to create “fifth column” cells in the capital of Libya by transferring experienced militants to the city, since there were few opponents of M. Gaddafi. They arrived by sea or land, sometimes under the guise of fishermen, in groups and alone. They started to lead a normal urban lifestyle, waiting for the signal to start the operation.

A large role in the operation to take the city was played by mercenaries from private military companies. This fact confirms the unexpected high resistance of the participants of the attack to losses. In fact, the Libyan rebels became here only a decoration, and most of the work to capture the capital was performed by Western mercenaries. PMC units were staffed by experienced military personnel, including former special forces soldiers. The same The Guardian reports that the mercenaries were not only from England, but also from France, the USA and, possibly, Italy. In turn, Canadian General Charles Bouchard said that the Alliance had decided to "cut the linking chain" between the Libyan rebels and NATO by sending junior officers to Libya.

A significant role in the subversive work against Libya was played by representatives of not only Western intelligence services and structures, but also Arab ones - Egypt, Qatar, Jordan and the United Arab Emirates.

In fact, the ground operation was talked about a long time ago, it was a logical step, since the war had reached an impasse.
Ctrl Enter
Noticed oshЫbku Highlight text and press. Ctrl + Enter
We are
Battle of TripoliChronicle of the Libyan War
Military Reviewin Yandex News
Military Reviewin Google News
30 comments
Information
Dear reader, to leave comments on the publication, you must to register.