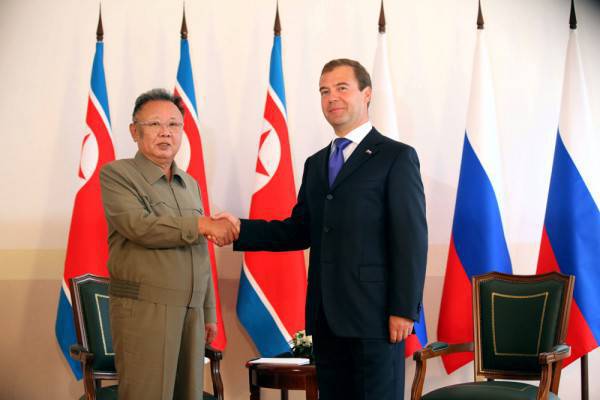 For the first time in nine years, North Korean leader Kim Jong Il visited Russia on an official visit, which attracted close attention from the Russian and Western press and Western officials. This event is particularly interesting in the light of the fact that the military of the Russian Federation and the DPRK are planning to hold joint military exercises. Everyone wants to know why he came and what he was able to negotiate with the Russian leadership. In the West, they believe that no serious agreements can be reached, and focus on the provocative behavior of the DPRK.

At the beginning of the 2000s, the DPRK leader visited Russia twice. In 2001, his armored train traveled almost all over our vast country to the northern capital, and in 2002, Kim Jong Il spent four days in the Far East. After that, the leader of North Korea in Russia was not. And over the past weekend, his famous armored train crossed the Russian-Korean border again and headed for the capital of Buryatia, Ulan-Ude, where the President of the Russian Federation also flew.

24 August leaders of the two powers held talks in the vicinity of the capital of Buryatia. The meeting between Dmitry Medvedev and Kim Jong-il took place on the territory of the military garrison “Sosnovy Bor”, where the head of the Russian state, in addition to meeting with the North Korean leader, presented the 11 battle banner of the separate military and assault brigade of the Eastern Military District. 25 August around 14: 00 Moscow time, the train of the leader of North Korea left the territory of the Russian Federation. The North Korean train passed through the Zabaikalsk-Manchuria checkpoint, then went from the Zabaikalsk station towards the border of the Russian Federation and the People's Republic of China. The leader of the DPRK entered China through the autonomous region of Inner Mongolia.

After the usual expressions of warm feelings for diplomacy, the sides touched upon a number of important issues for Russia and the DPRK, and indeed the world community. So, Kim Jong Il promised D. Medvedev to resume the six-party talks (North Korea, South Korea, USA, Russia, Japan and the PRC took part in them, they were interrupted in 2009 after the test launch of the North Korean launch vehicle) conditions Natalia Timakova, a spokeswoman for the head of the Russian state, said that during the six-party talks, the DPRK will be ready to “introduce a moratorium on the production of nuclear materials and tests.”

The DPRK, though of its own will and rather closed country, is of great importance for us. Russia needs peace on the Korean Peninsula, we are not interested in its "swinging" and the war between the two Koreas. In addition, there is the possibility of developing a number of infrastructure and economic projects that benefit both the Russian Federation and the DPRK. For example, for several years now there has been a project to unite the Trans-Siberian Railway and the Trans-Korean Railway. And the Russian side’s talks with Seoul on South Korea’s deliveries of Russian gas led to the idea of ​​laying the Russia-DPRK-South Korea gas pipeline, which will be over a thousand kilometers long and with an initial volume of 10 billion cubic meters.

After the talks, D. Medvedev said that there are results on this issue - an instruction has been given to create a special commission that will determine the specific parameters of bilateral cooperation on the issue of gas transit through North Korea, with the South Korean side joining the project. Now move for Seoul, which may not support the project. On the one hand, the project will be beneficial to South Korea - the problem of natural gas supplies will be solved, and the common project will link the two Koreas together, and this is a step towards integration, the future reunification of the divided Korean people. But, on the other hand, there is a reluctance to be dependent on a troubled neighbor, who, if desired, will be able to shut off the gas pipeline or withdraw some of the gas in its favor.

There are some unresolved financial issues in the relations between Moscow and Pyongyang since the Soviet era. North Korea has a considerable debt in the amount of 11 billion dollars, but bilateral negotiations on the search for mutually acceptable settlement options have not yielded any positive results in recent years. Moscow started lending to the DPRK in the middle of the 20th century. In addition to government loans, energy supplies, heavy industry and food products, all on a preferential basis, were also delivered to North Korea. In addition, with the help of the Soviet Union, 70 industrial enterprises were established in the DPRK. The amount of indebtedness of the DPRK turned out to be so high due to delays in payments and large penalties. A source in the Russian delegation said that the parties resumed a dialogue a month and a half ago on the restructuring of the DPRK’s debt. Now, during the meeting of the two heads of state, the foundations were worked out for a joint solution of this issue, and these events are evaluated by the Russian side as a major breakthrough.

The military component of the negotiations

Apparently, this meeting of the leaders of the Russian Federation and the DPRK (which, even in 2002, US President George W. Bush, in the annual address to Congress, introduced the so-called “axis of evil”, was a definite “signal” to the West, in response, Pyongyang called the US an “evil empire "), But also the background of the meeting itself. The meeting of the leaders of the two nuclear powers, and the DPRK, the de facto nuclear power, was held in the military garrison, on the territory of the closed military town of Sosnovy Bor.

Another interesting “signal” can be seen in the fact that on Monday the Commander of the Eastern Military District of the Russian Federation Konstantin Sidenko went to the Democratic People’s Republic of Korea, where he will discuss with the North Korean army leadership the development of military and naval cooperation between the two powers, the official representative of the Ministry said RF Defense to reporters. According to the representative of the Ministry of Defense of the Russian Federation: “The visiting program provides for meetings with representatives of the command of the Korean Peoples Army (KPA), during which consultations will be held regarding the renewal and further development of military and naval cooperation of the two countries, possible deadlines and the procedure for holding Russian Korean humanitarian exercises, the exchange of friendly visits of the ships of the Russian Navy and the Navy of the KPA ”. In addition, the military movements of the Russian Federation and the DPRK will discuss the interaction of the ground forces of the two powers and the possibility of holding joint Russian-North Korean exercises to search for and rescue ships and ships in distress on the high seas.

Opinions about the visit in the foreign press

Journalists of the American newspaper The Wall Street Journal believe that the DPRK leader had one goal - to receive Russian economic assistance. "Kim Jong Il has recently more vigorously asked traditional sponsors for help in order to cope with the consequences of economic sanctions and annual floods," the American edition said. In general, this task Kim Jong Il decided - the Emergency Situations Ministry will help the people of North Korea who suffer from the disaster. In addition, American journalists believe that the Russian side has its own pragmatic interest. "Russia is eager to stake out a role in the development of the port in northeastern North Korea, as well as to build a gas pipeline for supply to North and South Korea," the newspaper notes. True, the American newspaper predicted failure of the gas pipeline negotiations, but apparently it was mistaken.

Another American newspaper - The New York Times - also does not believe in the long-term effect of negotiations between the leaders of the two countries. “A trip to Russia is a hint that North Korea is ready to do business. But even if Kim and Medvedev agree in principle on energy deals, ”the problem of the North Korean nuclear project will complicate the negotiations, the publication said. The American edition cites the opinions of a number of experts from South Korea, so it is believed that rich hydrocarbon deposits give Russia "certain levers of influence in Northeast Asia, which it lost after the Cold War." In fact, it is hinted that the Russian Federation wants to continue the great-power policy in the APR, but by other methods. North Korea, in the opinion of South Korean experts, wants to weaken the growing influence of China by restoring and strengthening relations with Russia.

Unlike its colleagues from other American publications, the American newspaper The Christian Science Monitor acknowledged the success of Russia in that the DPRK would return to the six-party talks about the fate of its nuclear program, that the issue of building a gas pipeline is being resolved. The main goal of the North Korean elite, which began the "political defrost", is the solution of the food problem. For the DPRK, which “experienced hunger several times, political defrosting can improve the supply of much-needed food aid, and the prospect of becoming a transit zone between the Far East and Europe through Russia opens up even wider and more profitable opportunities,” American journalists report.

The British edition of The Independent repeats the thoughts of American colleagues that North Korea needs to “unfreeze” the six-party talks on the atomic program to solve the food problem, they use Russia for this. In addition, they are pushing that Kim Jong Il needs Moscow’s support to transfer power to his son Kim Jong-un. Although it was not part of the North Korean delegation. Besides, Stalin is not sitting in Moscow, why does Pyongyang approve of Russia?

The German edition of Der Spiegel in general refused to give ratings, passing only the factual side of the event. Kim Jong-il's visit to Russia was called "a new start in relations between the two countries."
Ctrl Enter

We are in Yandex Zen
Kim Jong-un is alive, but walks with a cane
The active phase of the "Sea Breeze-2013" exercise has been completed.
7 comments
Information
Dear reader, to leave comments on the publication, you must to register.