Be wary of the super-weapons of the Russian Air Force: Invisible Fighter T-50

November 29, 2014
89
The Russian stealth fighter T-50 PAK FA from Sukhoi could become a formidable rival of fifth-generation American combat aircraft such as Lockheed Martin’s F-22 Raptor and the F-35 single strike fighter. In fact, in some ways, the new Russian aircraft will surpass both American fighters, but the PAK FA has its drawbacks. 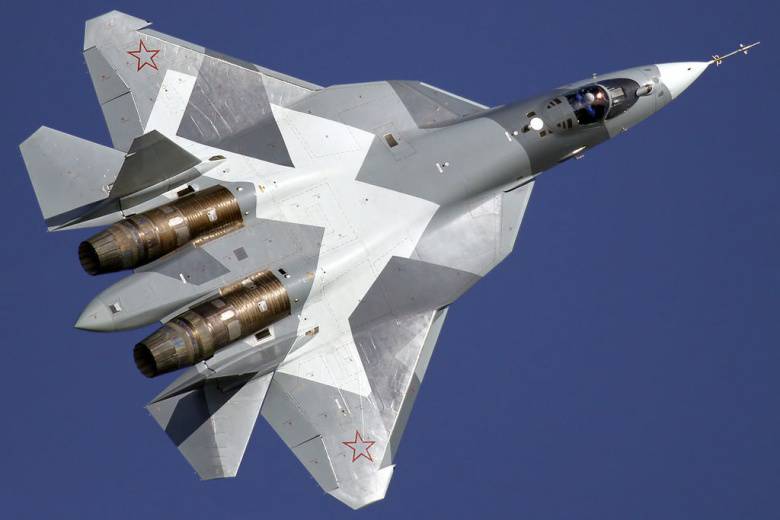 "The analysis data that I saw on the PAK FA indicates that it has a very modern design, which at least is not inferior, and according to some experts, even surpasses fifth generation American aircraft," the former chief of intelligence of the Air Force said to National Interest United States, Lt. Gen. Dave Deptula (Dave Deptula). “Of course, he has better turning characteristics combined with a deviation of the thrust vector, the tail unit surface than the F-35, and an excellent aerodynamic design.”

It seems that the PAK FA is more optimized to achieve air superiority than the multipurpose and shock F-35, being similar in this regard to the F-22. Like the Raptor, the PAK FA, due to its design, can fly high and fast, providing maximum kinetic energy for launching its long-range air-to-missile missiles, which significantly increases their range.

"In terms of performance, he is fully capable of competing with the Raptor aircraft," one senior military commander, who has extensive experience working with fifth-generation US fighters, told National Interest.

Like the F-22, the Russian machine will be able to fly at supersonic speed for a long time. Perhaps her cruising speed will be greater than Mach 1,5. The maximum speed of the aircraft must be greater than the Mach number 2,0, if only this load can withstand its coverage with low-profile characteristics.

But unlike the fifth generation of American aircraft, in the PAK FA much less importance is given to stealth, and much more maneuverability. In terms of purely kinetic characteristics, it can compete with the Raptor, but it surpasses the F-35 much and in many ways. And this superiority in performance can increase even more.

At present, an improved version of the Su-30 engine, called the 117 Product or the AL-41Ф1 engine and developing a thrust near 15000 kgf, is installed on the Russian aircraft. This engine has much more speed than its predecessor, the AL-31, from which it comes, but it was far from as reliable as the designers had hoped. However, this engine is temporary. The serial variants of the PAK FA must be equipped with a new engine. The product 30, which is to be put into service in the 2020 year.

The Russian fighter will also be equipped with a powerful on-board radio-electronic system, which is a continuation of Sukhoi’s work on Su-30 avionics. “There is information that the complex of on-board electronics is taken from the Su-35C with the addition of a very powerful multi-function radar with an active X-band phased antenna array,” said Deptula.

Further, there are indications that the PAK FA is equipped with an L-band radar, which is capable of detecting invisible aircraft of the size of a fighter. L-band radar will not allow the PAK FA to fight invisible planes, but the pilot will be able to focus other detection devices on one or another part of the sky.

In addition to radar and electronic support equipment, the PAK FA is equipped with search and tracking tools in the infrared range.

The Russians have made tremendous progress in the field of sensory systems, but American military aircraft still have advantages in terms of synthesizing data from detection devices, which is extremely important in modern warfare. “Now the real question is whether the Russians will be able to achieve the same level of data synthesis and networking as the F-22 and F-35 machines have reached. Now I would put my money in the plan on the USA and our allies, ”said Deputla.

A senior representative of the American military industry agrees with the estimates of the Depth. In terms of avionics, the PAK FA is closer to the F / A-18E / F Super Hornet or to the F-16E / F Block 60, rather than the F-22 or F-35. “Someone might say that the PAK FA is the fifth generation fighter, but by American standards it is more about the 4,5 generation aircraft,” he said.

In fact, the absence of a combination of various sensors and universal data receiving and transmitting lines in the PAK FA may be its Achilles heel. American strategists are developing a concept in which any aircraft and surface ship can act as a detection device for any aircraft, ship, or vehicle with weapons on board. The plane from which the launch of the weapon is launched may not even control it after launch. The Naval Integrated Fire Control-Counter Air (NIFC-CA) is already being developed in the US Navy (Naval Integrated Fire Control-Counter Air), which will do just that. Something similar is created in the Air Force.

“In the future, the aerodynamic characteristics will remain important, but speed, range and combat load will be much more important than maneuverability. More universal will be the universal ability to share information so that we can make decisions faster than the adversary, ”said Deputla. - This is a concept that can be called a "combat" cloud. What is more important is how we integrate the sensors and shooters present in the new systems than the new systems themselves. ”

The representative of the military industrial complex agrees with Deptula, but notes that the PAK FA has another vulnerability. The Russians as a whole have no need to fight in the framework of a dense, modern and well-integrated air defense system, like the Americans. As such, the PAK-FA actually has stealth characteristics, but it gives much less attention to stealth technology than in F-22 and in F-35. "Due to their lack of priorities such as stealth and data synthesis from detection devices, they are vulnerable to both fifth-generation western fighters, especially for the F-22," said the military industry representative. “If you look at the concept that the United States Air Force uses in F-22 / F-35 aircraft, it becomes clear that the PAK FA will face considerable difficulties.”

But the Chinese in this regard is different история. “It is because of this scenario that the Chinese value their J-20 and J-31 cars so much,” said the MIC representative.

In any case, although Russia has the capacity to develop a very efficient fifth generation fighter, the important question remains whether it can launch its production. The Soviet industrial base has always been aimed at creating a large number of fairly rough samples of low-quality equipment. However, stealth technology requires a level and precision of production that Russia has never demonstrated before - especially after the collapse of its industrial base with the collapse of the Soviet Union. “She has a long way to go before she reaches the initial readiness of this system weapons for effective use, said a spokesman for the military. - Neither the Russians nor the Chinese have yet managed to set up production of their new generation fighters. The Russians first need to restore their production facilities in aviation industry. Neither Russia nor China possess stealth technologies, experience of production and operation to such an extent as the United States. "

Military leaders from the Air Force agree with his opinion. “I will say that it is extremely difficult to bring the fifth generation aircraft from the image in the catalog to a fully functional and reliable sample,” said one of them. - They do not have such experience and such an industrial base as we have in those issues that they want to solve. And it’s quite difficult for us to solve them, so I foresee great difficulties with deliveries to the troops. ”

A comprehensive assessment of the PAK FA before adoption is a difficult task, even for those who have access to military intelligence. “It’s hard to talk about this until the production of the PAK-FA has begun,” said another Air Force representative. - I doubt that they will be on an equal footing with our fifth-generation aircraft, but we also have few of them. And, most likely, they will surpass the fourth generation [F-15, F-16 and F / A-18] cars. ”

However, the US has already begun to develop requirements for the F-22 and F-35 successor aircraft, which will be the FX Fighter Superiority Air Fighter, as well as the next generation F / A-XX attack fighter aircraft. But even before this, the Pentagon may take certain steps to reduce the threat from Russian and Chinese stealth fighters.

“Airplanes and information technologies of the fifth generation allow us to create new concepts of hostilities that we have yet to develop. I would say that this is what we should devote our efforts to before we spend a lot of time and money on creating the next revolutionary fighter, ”said Deputla. “If a long-range strike bomber (LRS-B) is properly designed for future development, then it will be the next important component of this concept instead of FX and F / A-XX.”

According to Deptuly, if we fully integrate and ensure the interfacing of the various weapons systems of the Pentagon, so that they act as a single whole, new opportunities will appear that the new aircraft do not have. “Future advances in data exchange promise to drastically increase the combat impact when individual aviation systems are fully integrated with the sea, land, space and cybernetic systems, forming an all-penetrating complex,” he said. - Tied together and creating a self-creating / self-restoring "fighting" cloud "individual systems will be able to enhance their advantages, and at the same time it will be possible to ignore certain disadvantages and vulnerabilities of some systems. It is in this direction that we need to move. This may well become the basis of the next “compensation strategy”, which the Minister of Defense and his deputy are fighting for today. ”

Dave Majumdar has covered military issues since 2004. He is currently writing for the US Naval Institute, Aviation Week, The Daily Beast and other publications. He previously covered national security issues at Flight International, Defense News and the C4ISR Journal. Madjumdar was engaged in strategic research at the University of Calgary, and is currently studying the history of naval forces.