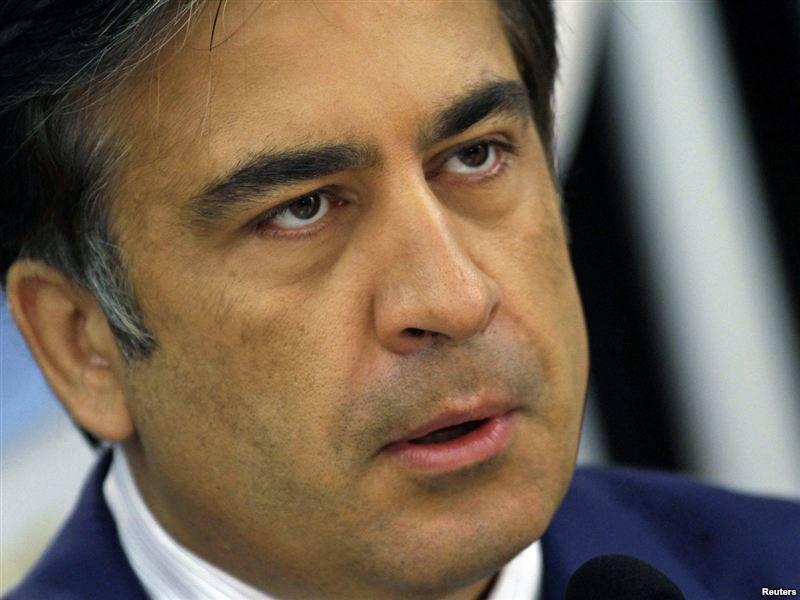 Mikheil Saakashvili, it seems, cannot even spend a day in order not to let go of some vile utterance either to Russia, or Abkhazia and South Ossetia which have separated from Georgia, and sometimes about all of them together. In general, examples of this are innumerable, and all Saakashvili’s attacks are built around one wretched little idea: Georgia is a country of high ancient culture and part of European civilization, Russia is a barbarian conqueror power, Abkhazians and Ossetians are ungrateful tribes who settled Georgian lands and fled with them under the patronage of the Russian invaders.

Here is something like that, he reiterated August 22, speaking in the seaside town of Anaklia near the Abkhaz border.

Picture of stretching out his hand towards Abkhazia, the Georgian president said with pathos: "There are barbarians, and here is civilization, there is Mongoloid brutality and ideology, and here is the real, oldest Colchian Europe, the most ancient civilization."

Actually, something like Saakashvili has repeatedly stated, and on the other hand, it would be offended to whom. As Ivan the Terrible once said to the Polish King Stefan Batory, "you are with me and you have the honor to scold, and I also have to speak disgrace with you." This is despite the fact that Batory, although he was an outspoken enemy of Russia, but in the aggregate of his personal qualities deserved respect much more than Mr. Saakashvili.

But what is curious, this time Saakashvili’s statements caused outrage in Georgia itself. Interfax reports with reference to Tamara Kordzai, a representative of the Association of Young Lawyers of Georgia, Georgian non-governmental organizations have condemned this speech by Mikhail Saakashvili, accusing him of xenophobia. “Under the barbarians, President Saakashvili probably meant Russians and Abkhazians. This is a manifestation of xenophobia, ”Kordzaya is confident.

In turn, Arnold Stepanyan, leader of the Multinational Georgia NGO, told reporters on Wednesday that a number of organizations intend to submit a joint letter to the administration of the President of Georgia, "in which they expressed disagreement with the phraseology of President Saakashvili, containing signs of xenophobia." “Our organization stated four cases when Georgian President Mikhail Saakashvili made xenophobic statements. He talked about Papuans, about blacks, or about someone else. Every time we sent letters demanding an apology. As a rule, in these cases, the presidential press secretary, Manana Manjgaladze, at the press conference, makes explanations in connection with the inadequate statements of the president, ”said Stepanyan.

According to Arnold Stepanyan, representatives of the Georgian authorities, along with Saakashvili, have already been observed in openly chauvinistic behavior. “Lado Vardzelashvili (Minister of Sport and Youth Affairs of Georgia) met with applause a joke about Jews during one of the games of the Club of funny and resourceful. The next day we demanded his removal from office, but this did not produce any results, ”said Arnold Stepanyan.

The point was that during one of the KVN games, the team representing Tbilisi Medical University answered the leading question about “Adolph Hitler’s greatest achievement”: “Free gas in every Jew’s family”. Then many human rights organizations in Georgia expressed their indignation at the fact that the minister sitting on the jury was not only not outraged, but on the contrary, rated this "joke" with the maximum score.

However, for the sake of justice, let us point out that when Saakashvili punishes for violating “tolerance”, this also provokes protests of Georgian society. KM.RU already had to say what a wave of indignation was caused in the country by the amendments to the Civil Code, adopted on the initiative of Saakashvili, on giving legal status to religious denominations in Georgia. According to many Georgians, the Armenian Apostolic Church can win the most from these amendments, which gets a chance to reclaim six ancient Armenian churches. In truth, these fears seem to be strained - on the issue of temples, Saakashvili himself takes the same nationalist position as the main part of Georgian society. Yes, he clearly does not suffer from an excess of warm feelings towards Armenia (which he considers to be an ally of Russia), nor to the Armenians themselves (especially Abkhazians who fought against the Georgians in 1992-1993).

The leader of the Javakhk movement, which unites Armenians living in Georgia, Norik Karapetyan, for example, explicitly stated that the amendments equalizing the status of various faiths were adopted not because of love for Armenians, but under the influence of the Roman Catholic Church and the Muslim community. “A significant role was played by the fact that the Georgian authorities are completely pro-Western. The Armenian factor was used because there is pressure from the West and Europe. They, one way or another, should have done it, ”said Karapetyan.

However, the fact remains that Saakashvili was accused of indulging Armenians. As the artistic director of the Tbilisi Drama Theater named after him publicly stated. Shota Rustaveli Robert Sturua, Mikhail Saakashvili cannot love Georgia because he is a “hidden Armenian” by origin, and he will not understand what the Georgians want. Here in this case (unlike stories with the minister and anti-Jewish anecdotes), the reaction of the authorities followed quickly. Robert Sturua was dismissed by order of Niki Rurua, Minister of Culture of Georgia, on charges of "xenophobic statements." Such efficiency, in principle, is understandable - the “xenophobic utterances” were uttered by the director not to address some abstract Russians, Abkhazians, Papuans and Jews, but to a very specific Georgian president. Besides the direct chief minister of culture.

The Georgian public spoke in defense of Sturua. Recently, on August 18, there was even a protest rally in Tbilisi against his dismissal. Georgian actors and directors - more than 200 people - came out to protest against Sturua's dismissal. As stated by one of the organizers of the protest rally, the actor of the Rustaveli Theater Beso Zanguri, they expressed "a reasonable protest against the authorities' reckless step." The rally, of course, was attended by representatives of the opposition - Nino Burjanadze, Kakha Kukava, Eka Beselia and others. But this, however, does not apply to the essence of the matter.

We are in Yandex Zen
Nikolay Silaev, Andrei Sushentsov: Georgia after the elections and prospects for Russian-Georgian relations
Religious conflict in Abkhazia? It is possible
34 comments
Information
Dear reader, to leave comments on the publication, you must to register.