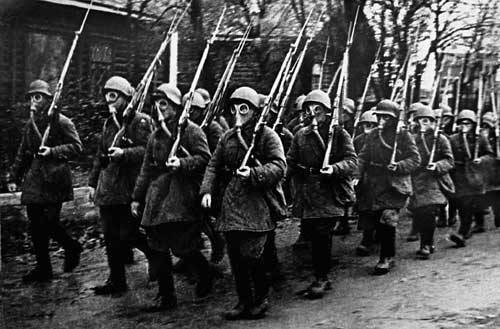 During the fighting during the First World War, various toxic substances were widely used. Subsequently, in the 20-30 of the twentieth century, the use of chemical weapons and chemical defense systems became not only the topics of numerous theoretical studies and publications, but also the objects of practical activity in the armed forces of all the leading states of the planet.

True, Charles Moore, a member of the Paris Academy of Sciences, noted in 1920: “There is not a single person in the entire civilized world who would not tremble with horror at the mere thought of asphyxiating gases.” However, military experts had their own particular opinion on this subject. For example, General Amos A. Frys, head of the chemical forces of the US Army, stated in 1921: “... not only should chemical war be recognized by all civilized countries in the future, but also to become the only way that all civilized nations will use without hesitation .. Chemical warfare is just as fair a means of struggle as machine guns. ”

In turn, the Soviet military chemist J. Avinovitsky said: “For our part, we must recognize that the chemical war advanced by modern capitalist reality is a fact that you cannot pass. Therefore, questions of the chemical defense capability of the Soviet Union should be the subject of special attention of all departments and workers of our country. The rule of conduct put forward by comrade Trotsky in the defense of SSSR “An eye for an eye, a gas for gas!” We will have to implement it. ”

Meanwhile, the head of the English military chemical department, General Gartley, the rector of the University of Pittsburgh, Dr. Bacon, professor of biochemistry at Cambridge University J. Eldan, the already mentioned General A. Freis and his compatriot E. Farrow, a famous chemist, a professor, wrote about the “humanity” of poisonous substances. in Breslau U. Meyer.

Yet 17 June 1925, in Geneva, a number of states signed a protocol on the prohibition of the use of asphyxiating, poisonous and other similar gases, as well as bacteriological agents in war. 2 December 1927, the USSR joined this agreement.

At the same time, the Geneva Protocol did not preclude research in the development, production and accumulation of chemical warfare agents and their means of delivery. Therefore, it is not surprising that all the militarily leading countries of the world continued the chemical arms race.

Years later, chemical troops (chemical mortar battalions and regiments) were included in the Wehrmacht formations that invaded the Soviet Union 22 June 1941. In warning the Red Army about the real threat of the German military unleashing a chemical war, our Supreme High Command demanded "to reliably organize the chemical defense of all troops and put the troops' means of protection, decontamination, chemical reconnaissance and surveillance ... carelessness and underestimation of the chemical danger to prevent most harsh measures. "

To fulfill these instructions, the chemical service and the chemical troops of the Leningrad Front during the initial period of the Great Patriotic War passed a difficult path of mobilization, formation and development. Difficulties existed in the training of personnel, the solution of issues of technical equipment and weapons, rear support, and the use of chemical forces. With the onset of the blockade, the situation became even worse. In the correspondence of some officials, the main reason for the difficulties encountered in organizing the chemical defense was called "the lack of attention of the command of the Leningrad Military District and the Red Banner Baltic fleet in peacetime ”to PCP issues.

Meanwhile, interrogations of prisoners, transfers of captured documents, reports of military intelligence agencies and intelligence agents, information received from the partisans, all testified to the strengthening of chemical discipline by the enemy, preparing for the use of chemical warfare agents.

Thus, in a telegram sent by 6 on September 1941 of the year by the military council of the front to the People’s Commissar of Defense J. Stalin, the testimony of the prisoner of war F. Schneider was presented. A military engineer, doctor of chemical technology, an associate professor at the Berlin Polytechnic Institute and a senior researcher at the branch of the Farbenindustry Research Institute, on August 31 flew a Junkers-88 aircraft that was shot down and dropped into the Gulf of Finland in 7 -8 km northwest of Peterhof. The crew of the plane was killed, the documents on board were destroyed, Schneider received severe wounds and died 32 minutes after being captured, but during this time he was nevertheless managed to be interrogated.

The oral testimony of a prisoner of war was as follows: in the concern “Farbenindustry” and the Wehrmacht, secret preparations were made for the use of Ober Oubermüller acting on unprotected skin, there was also a poisonous substance Obermüller-bis, which could penetrate through a gas mask. According to the prisoner, "the above-mentioned substances decided to use in case of an unexpected attack on the British Isles."

Dr. Schneider also said the following: "... recent events may cause a sudden use of agents in the northwestern and western directions of the front ... Keitel intends to carry out quite suddenly and under favorable meteorological conditions (east wind)." True, the high command of Germany in the person of Keitel "hopes to achieve success in the same way, and the agent of Obermüller to be left for a sudden invasion of England." However, "in the last days, Keitel gave the order to be ready for use (against the Leningraders. - E. K.) OB of Obermüller."

The note prepared for the meeting of the command and commanding staff of the chemical service of the Leningrad Front, the degree of increase of chemical danger is obvious: “If so far there is no data on the use of enemy agents, the reconnaissance and survey of prisoners show that the reality of the threat of chemical war is increasing every day :

1. According to the data obtained by us, it is known that in September the Germans from Bucharest in the northern direction delivered gas-balloon equipment.

2. According to the same data, it is known that in September the Germans sent several hundred wagons with chemical ammunition to the Eastern Front.

3. Undercover intelligence SZF 3 established the presence of warehouses with agents before the front of one of the armies.

The fascists declare that they will apply chemistry wherever they encounter stubborn resistance, and at the 212 SDF site they threw leaflets of the following content: “If you use hellish weapons (obviously, Katyush rocket shells are meant.” - E K.), we will apply OB.

In a report to the head of the Main Military Chemical Department of the Red Army (GVHU KA) 10 in December 1941, Colonel A. Vlasov, head of the chemical defense department of the front, described the situation as follows: “Southern is of the greatest interest to the enemy in military-chemical terms sector of the Leningrad Front, which has favorable conditions for the use of chemical warfare agents.

Due to the fact that the front line from the south is almost close to Leningrad, the enemy has the opportunity, in addition to aviation means of chemical attack to act from this area on all rear and industrial facilities, as well as on the population of the city with artillery fire, and under favorable weather conditions, the adjacent outskirts of the city may be in a sphere accessible to a wave of poisonous smoke release.

Documents from the Central Archive of the Ministry of Defense of the Russian Federation indicate that the danger of the use of chemical warfare agents by the Germans remained throughout the blockade of Leningrad.

Surveys of prisoners, examining captured documents captured during Operation Iskra, allowed the staff of the NKGB in the Leningrad Region and the city of Leningrad to prepare and July 7 on July 12 to send a special note to the Chief of Staff of the Leningrad Front, Lieutenant General D. N. Gusev, on the German chemical detachments and their structure.

The note has the following main sections: the structure of chemical parts, weapons, equipment and instruments of chemical troops for the contaminating (toxic) parts. A separate section presents the "troops of missile guns", which are armed with 15- and 30-centimeter throwing guns - 6-barreled mortars 1941 of the year. Ammunition to them - “explosive, flue, with flammable oil, also provides the use of these mortars for firing shells with agents of all kinds.”

Much attention is paid to chemical warfare agents in service with the German army:

- marking “yellow cross” - Zh-Lost (viscous mustard), OMA-Lost (prospective decoding Oxol mit Arsen Lost), Stickstoff-Lost (nitrogenous mustard), OO-Lost (presumably Oxol-Oxol-Lost - the chemical composition of this poison substances were not known not only to cadets, but also to teachers of the military-chemical school in the city of Celle in Germany);

The document clearly demonstrated the readiness of fascist Germany to conduct a chemical war.

The front, army level of decrees and orders suggests that in the subordinate units (compound, unit) the number of documents on the anti-chemical protection of troops and objects increased like an avalanche. Their development and implementation assumed a systemic nature, which ultimately caused a sufficiently high chemical discipline, readiness of the troops to act in conditions of the use of chemical warfare agents by the enemy.

The question involuntarily arises: why did the German military-political leadership not order the use of chemical weapons on the war fronts?

Is it just the desire of the German generals to end the war "with the weapon with which it was launched?"

Or was Hitler frightened by the possibility of a retaliatory strike from Britain, the USA and the USSR?

Or did the aggressor refuse to take a chemical strike due to a rather high estimate of the anti-chemical defense of the Red Army?

These and many other questions still remain open ...