Nuland promises to lift the sanctions in exchange for the Crimea. What awaits Russia in the coming years

November 28, 2014
113
US Assistant Secretary of State Victoria Nuland, who recently visited Kiev in the company of Vice President Biden, said that the lifting of sanctions against Russia is possible only after the return of the Crimean peninsula to Ukraine, reports Free press with reference to the Latvian edition "Medusa". 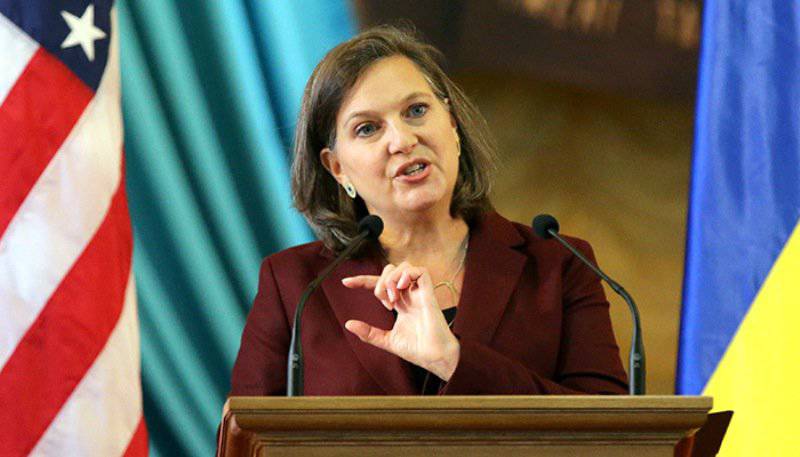 “We said that we are ready to lift the sanctions adopted in September. Of course, there were also sanctions adopted earlier in response to the Crimea. These were less serious sanctions, and they will be maintained until we can restore Ukrainian sovereignty in the Crimea, ”Nuland told a Latvian newspaper.

According to her, “the most painful sanctions”, introduced in September, can be canceled if Moscow fulfills the agreements reached in Minsk.

It seems that American diplomats do not follow the situation at all. Otherwise, they would have understood that bargaining with regard to the Crimea is inappropriate. As the Russian president said, “Our Crimea” and this is a “strategic decision”. It is hard to imagine that it will ever be audited.

What is Russia to prepare for and how to behave in this situation? The “Free Press” correspondent asked these and other questions to the senior researcher of the Russian Institute stories RAS to Andrei Marchukov.

“The statement of Nuland, like a whole series of other statements emanating from the American administration, from European officials, from German Chancellor Merkel, is in fact a banal blackmail,” said Marchukov. - The West used this blackmail in fact from February of this year, forcing Russia to abandon any policy in its interests on the territory of Ukraine (within the borders at that time), to abandon its own policy in the Crimea and Donbas.
Actually, the sanctions themselves are exactly the same nature of political blackmail. Not by chance, all these restrictions were introduced gradually, accompanied by a big hype and a big ideological campaign.
They pursue a simple goal - to take the political leadership of Russia, which is called "weak". Recently, Sergei Lavrov, speaking at a meeting of the Council on Foreign and Defense Policy, said about the same thing ... ”.

Correspondent: "He seems to have said that Western countries wanted to force Russia to" swallow humiliation. "

Marchukov: “And it should be noted that in part this policy of the West, which is blackmailing the Russian leadership and the Russian ruling class, has borne fruit. We remember, in particular, that the whole spring and the beginning of summer were held under such an unspoken campaign "you should not quarrel with the West for the sake of Ukraine" (here you can correct "for the sake of Donbass", "for the sake of Novorossiya", etc.)
The West, in fact, is counting on using blackmail, to which, of course, a certain part of the Russian elite is exposed, to achieve specific goals. ”

Correspondent: "What do you mean, prone?" Why?"

Marchukov: “Because a quarter of a century, in fact, since 1991, the current Russian ruling class (although it has changed in some individuals, but as a whole, like a corporation, has remained unchanged) did nothing that tried to integrate into the Western political, economic and ideological system. First of all, on a personal level - there are bank accounts, property, real estate in Europe and the USA. Here and study their offspring in prestigious European and American universities. Actually, many families live there. They, by and large, in Russia only earn money, and all their interests are there.

And besides his personal aspirations to Europe, he actively involved there, integrated the Russian Federation, what remained after the collapse of the Soviet Union, called Russia. Actively built it into Western supranational and interethnic structures, instilling liberal ideology prevailing in the West, etc.

Therefore, at times to give up all this, "then" achieved life benefits, these people do not want. Moreover, for what they will do it? For the sake of some Donbass, Crimea, New Russia?

It is clear that this environment is very favorable for the influence of the very same United States and European officials, and it is very reluctant to follow the course that the Russian president is pursuing. And Putin, as we know, has repeatedly stated that he will protect the Russian-minded population in Ukraine. What will not leave these people to the mercy of fate, at the mercy of Ukrainian nationalists and the US-Ukrainian oligarchy.

In my opinion, the West rightly sees in these circles its allies, capable of influencing, and if not influencing, then, as a last resort, reviewing the entire Russian internal political context, and doing so, as beneficial to the West - the United States, Europe, etc. ".

Correspondent: “But we have kind of gone through the days when the“ seven bankers ”determined the country's policy? "

Marchukov: "Yes. The level of support for the current Russian president by the people is now as high as ever. They trust him, they hope for him.
Therefore, for Putin and for people who are, relatively speaking, his team, to turn off this course is tantamount to suicide. First, it will mean the complete collapse of their own, as a political ruling group. Secondly, it will cause outrage among the people. The surrender of Donbass, the surrender of the Crimea, which has already become part of Russia, will be perceived by society as a direct betrayal.
It is clear that neither Putin nor his associates would like to bring the situation to such a result. On the other hand, constant pressure from outside and from within the country - from the West and the so-called “sixth column” - is strongly felt. ”

Correspondent: “Recently, Russia has often been reproached for failing to comply with the Minsk agreements. But I would really like to understand what those who teach us mean when they talk about the escalation of the conflict? Full destruction by the Ukrainian army of the population of Donbass? "

Marchukov: “The Minsk agreements are primarily violated by the Ukrainian side, which is being incited by the United States. Already, the pattern is simply observed: as soon as emissaries come from overseas, shelling intensifies, military tensions increase.
What do they think Russia should do? Donate Donbass and New Russia. To stop all support, including political support, however partial it may be, and recognize Ukraine’s sovereignty over these territories. Moreover, the sovereignty in the understanding of Kiev is the most complete “cleansing”, the destruction of the dissenters and the establishment of the Bandera dictatorship.
With regard to the Russian and pro-Russian forces, such a notion as genocide is not valid and is not considered at the international level. The West will in any case applaud the actions of Poroshenko, Yatsenyuk and others. ”

Correspondent: "What to do?".

Marchukov: “Russia needs to stop this half-heartedness in relation to Donbass and Novorossia. Stop calling them South-East and East of Ukraine. To recognize the Donetsk and Lugansk people's republics, following the example of South Ossetia and Abkhazia (I think there are a number of countries that will follow Russia in their recognition), and already to build relations with them accordingly - to protect and help. Maintain economically, because you still have to save them economically from the position in which Kiev led them, destroying the entire infrastructure and people. Building relationships with the Donbas, as with a part of Ukraine, is a disastrous position. ”

Another interlocutor of the building, Head of the Center for Political Science Studies at the Financial University under the Government of the Russian Federation, Pavel Salin, suggested that the coming years will be difficult for Russia:

“The question now is that it is necessary to change the model of economic development in the new conditions. Finance Minister Siluanov said the other day that she had exhausted herself of the economic model that had been maintained in the country for the past fifteen years. Therefore, there is a question about which economic, and, accordingly, in this connection, the political model will choose Russia in the new conditions.

On the one hand, there is a mobilization model that certain circles lobby for. And there is a model of full liberalization, according to the principle of the NEP, when the economy is liberalized to the maximum, and the control and political levers remain under the supervision of the authorities (as the Bolsheviks did in their time). ”

Correspondent: “And which model is preferable?”

Salin: “Now there is a struggle around these two projects. Each provides certain chances to resist the sanctions policy, but also carries certain risks.
Nevertheless, it is absolutely certain that next year the economic model that has existed for the past fifteen years will be gone. ”

Correspondent: “Are there enough forces and resources to carry out such an important reform? The main thing: for the better, the changes will be?

The liberalization project is also a very serious risk. Because the negative scenario may repeat: economic liberalization began, and then the entire political system collapsed.
Therefore, the question is, of course, open. And the risks are very significant, given the fact that Russia is now much weaker than it was even a few decades ago.

Authorities say: get ready to tighten their belts. This is absolutely true. The question is, how tight will they have to be? I'm afraid that is very tight. ”

Correspondent: "We give the Crimea something?".

Salin: "Of course not. Such a formulation of the question is absolutely unacceptable. With the East of Ukraine there are still some compromise options. There is no way to play back here. ”