November 28 2014
10
During the Great Patriotic War, the Soviet infantry was armed with the ROX-2 and ROX-3 backpack flamethrowers (the Klyuev-Sergeev backpack flamethrower). The first model of the flamethrower of this series appeared in the beginning of the 1930-ies, it was the ROX-1 flamethrower. At the time of the start of World War II, there were special flame-throwing teams in the composition of the rifle regiments of the two departments. In service with these teams were 20 knapsack flamethrowers ROX-2.


Based on the accumulated experience of using these flamethrowers at the beginning of 1942, the designer of the military factory No. 846 V.N. Klyuev and the designer who worked at the Research Institute of Chemical Engineering, MP P. Sergeev, created a more advanced infantry backpack flamethrower, which was designated ROX-3. This flamethrower was in service with individual companies and battalions of knapsack flamethrowers of the Red Army during the entire Great Patriotic War.

The main purpose of the ROX-3 knapsack flamethrower was the defeat by a stream of burning firepower of enemy enemy personnel in fortified firing points (billets and pillboxes), as well as in trenches and passageways. In addition, the flamethrower could be used to combat enemy armored vehicles and arson various buildings. Each knapsack flamethrower was serviced by one infantryman. Flame-throwing could be performed both with short (1-2 duration of a second) and long (3-4 duration of a second) shots. 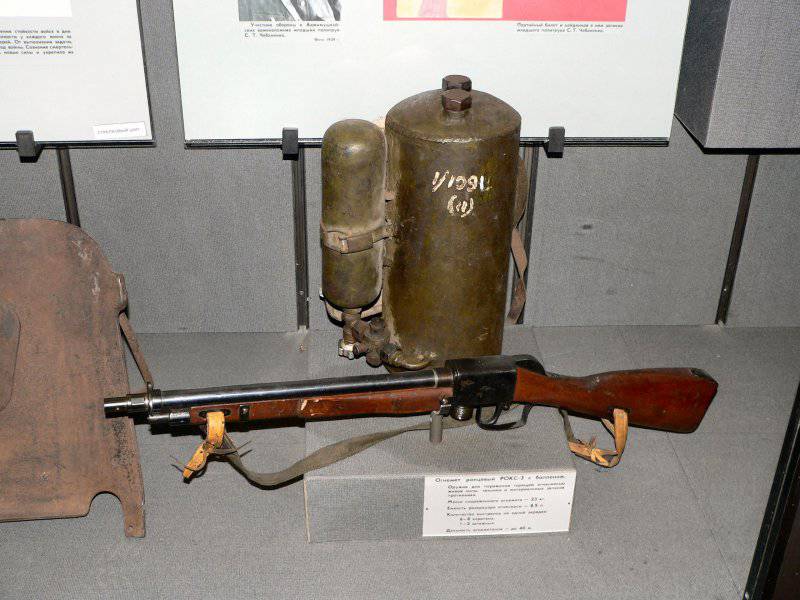 The ROKS-3 flamethrower consisted of the following main combat units: a tank for the storage of fire mixture; compressed air tank; hose; gearbox; gun or shotgun; equipment for carrying a flamethrower and a set of accessories.

The tank in which the fire mixture was stored had a cylindrical shape. It was made from sheet steel having a thickness of 1,5 mm. The height of the tank was 460 mm, and its outer diameter was 183 mm. In the empty state, it weighed 6,3 kg, its total capacity was 10,7 liters, the working capacity - 10 liters. A special filling neck was welded to the upper part of the tank, as well as a check valve body, which were sealed with plugs. In the lower part of the tank for the fire mixture, a suction pipe was welded, which has a fitting for connecting to the hose.

The mass of the compressed air bottle of the flamethrower was 2,5 kg, and its capacity was 1,3 liters. The permissible pressure in the compressed air tank should not exceed 150 atmospheres. Filling of cylinders was carried out using a hand pump NK-3 from cylinders L-40. 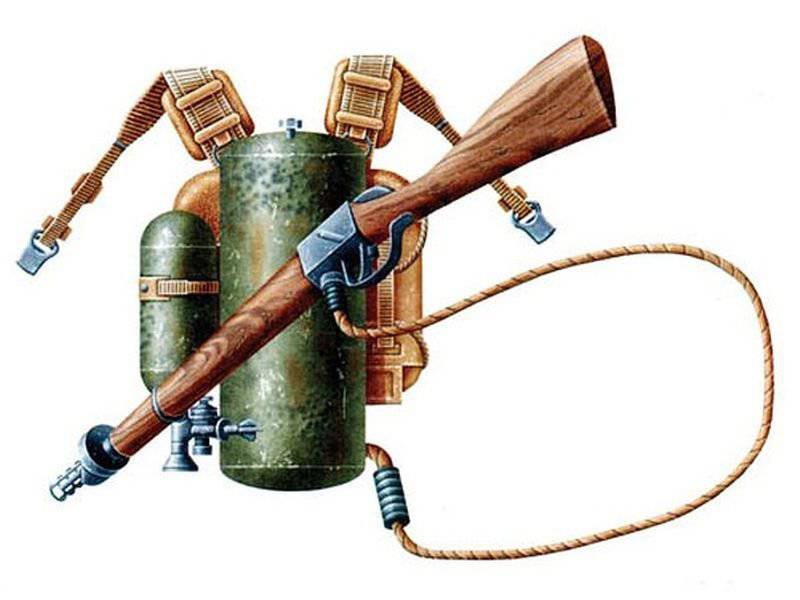 The gun of the knapsack flamethrower consists of the following main parts: cigarette lighters with frame, barrel assembly, barrel lining, chamber, butt with crutch, trigger guard and gun belt. The total length of the gun - 940 mm, and weight - 4 kg.

The principle of operation of the backpack ROX-3 flamethrower was as follows: compressed air, which was in a cylinder under high pressure, entered the reducer, where the pressure decreased to the normal operating level. It was under this pressure that the air eventually passed through the tube through the non-return valve into the tank with the fire mixture. Under the pressure of compressed air through the intake tube located inside the tank, and the flexible hose, the fire mixture entered the valve box. At that moment, when the soldier pulled the trigger, the valve opened and the fiery mixture went out through the barrel. On the way, the fiery jet passed through a special pacifier, which was responsible for extinguishing the helical vortices arising in the fire mixture. At the same time, under the action of the spring, the drummer smashed the primer of the igniter cartridge, after which the flame of the cartridge with a special visor was directed towards the muzzle of the gun. This flame ignited the fire mixture at the time of its exit from the tip. 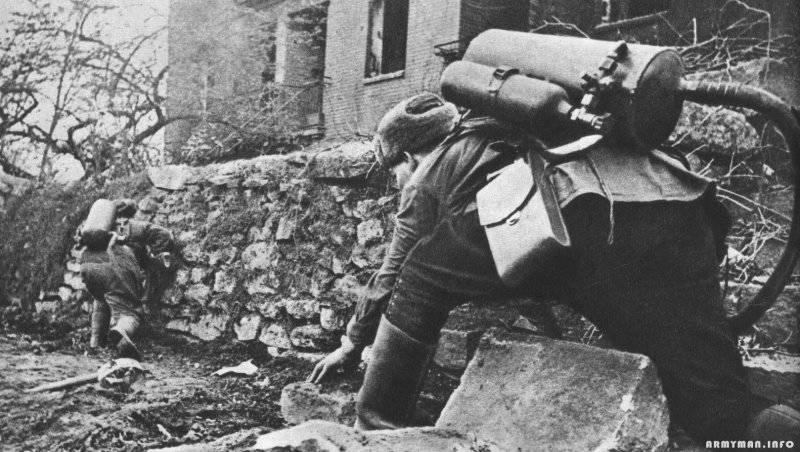 The maximum range of throwing fire mixture reached 40-42 meters (depending on the strength and direction of the wind). In this case, the flamethrower ammunition was 10 igniter cartridges. One charge of the backpack flamethrower (8,5 kg) was enough to produce a 6-8 short or 1-2 protracted shot. Long shot regulated by pressing the trigger. The curb weight of the ROX-3 was 23 kg.

The combat use of flamethrowers

In June, the first 1942 individual mouthpieces of flamethrowers (ORRO) were formed in the Red Army in 11. According to the state, 120 flamethrowers were in service in every company. The first combat test data units had to pass during the Battle of Stalingrad. In the future, flamethrower companies were useful during the 1944 offensive operations of the year. At this time, the Red Army troops not only broke through the defenses of the enemy of the positional type, but also impressive fortified areas in which units armed with backpack flame throwers could operate particularly successfully.

For this reason, along with the individual flame-throwing companies already existing at that time, in May 1944, the Red Army began to form separate battalions of knapsack flamethrowers (OBRO), which were included in the assault engineering-sapper brigades. According to the state, each such battalion was armed with X-NUMX flamethrowers ROX-240 (two companies of 3 backpack flame-throwers each). 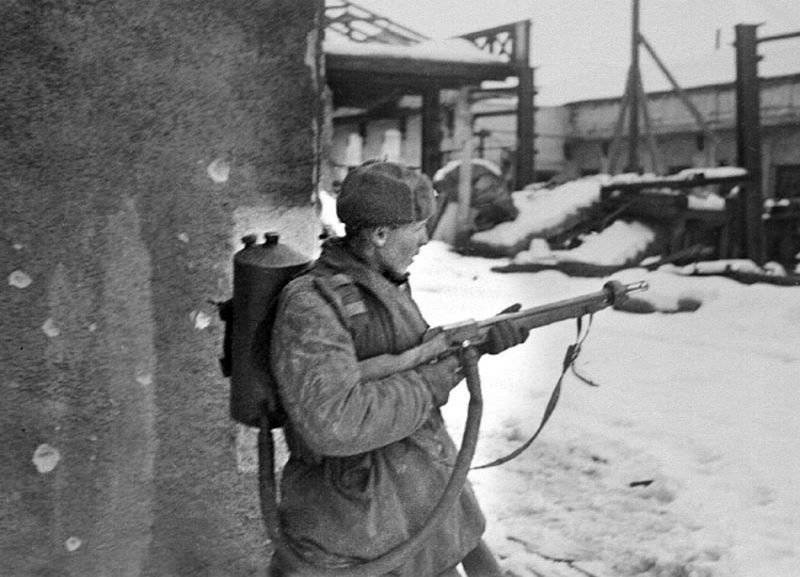 Knapsack flamethrowers were very effective in the fight against enemy infantry, which was hidden in trenches, communications, and other more complex defensive structures. Knapsack flamethrowers were also effective in repelling the attacks of enemy infantry and tanks. With very great effectiveness, they were used to destroy garrisons located at long-term firing points during breakthroughs of the defensive lines of fortified areas.

Most often, a company of backpack flame throwers was attached as a means of strengthening the infantry regiment, and it could also act as part of assault engineering-sapper battalions. In turn, the commander of an assault engineer-sapper battalion or rifle regiment could reassign the flamethrower platoons through the branches and groups in 3-5 to soldiers as part of their rifle platoons or into separate assault groups.

Rox-3 backpack flamethrowers continued to be in service with the Soviet Army (SA) until the beginning of the 1950-s, after which they were replaced in the troops by more sophisticated and light infantry flamethrowers, called LPO-50. After the end of World War II, flamethrowing units were transferred from the engineering troops to chemical troops, which in 1992 were renamed the troops of the RCBZ (radiation, chemical and biological protection). It is in the composition of the troops of the RCB protection that today the subunits armed with flame-incendiary weapons are concentrated.

We are in Yandex Zen
Russian flamethrower: from the beginnings to the present day
Victory weapons. "Degtyar Infantry" - machine gun DP 85 years
10 comments
Information
Dear reader, to leave comments on the publication, you must to register.