Isolation of Donbass. Cause and effect

November 28, 2014
25
It seems that November was the month for the Ukrainian authorities to discover the obvious truth that the Donbass is no longer Ukrainian. 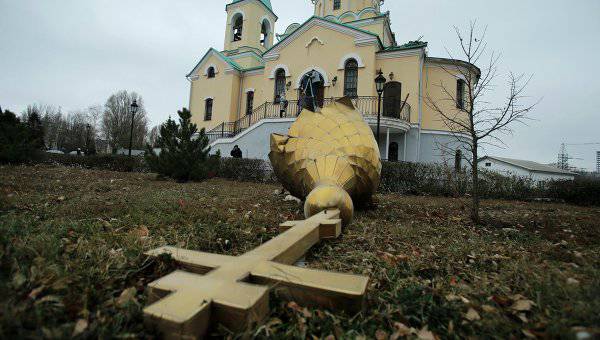 In any case, that part of the Donbass, which is controlled by the "DNR" - "LC". Although with those Donbass territories, which are currently being held by the Ukrainian army, not everything is so obvious. According to the information coming from there, it is very difficult to call their local population Ukrainian or pro-Ukrainian.

In order to illustrate the attitude of the inhabitants of the “liberated” from the “terrorists” territories of Donbass towards Ukraine, let me give evidence of eyewitnesses.

Here are the impressions from the "Ukrainian" Donbass that Kiev journalist Yuliana Skibitskaya brought home:

“The other day I went to the ATO zone, to the liberated and front-line cities under the control of Ukraine. The local taxi driver from Kramatorsk, nicknamed the General, immediately warned:“ don’t say that you are a Kiev journalist. ”Of course, I didn’t listen to Ocheretny (a village not far from Donetsk), when I heard that I was from Kiev, unfolded with the words “yes, you went .... d.” In Popasna, 90% of the population is waiting for the “militia” to come and save the “Kiev junta” from power. , that from Pervomaisk, that in 19 km from Popasna, refugees fleeing to the city, tired of the LC Why did the separatists wait so much in Popasna? When I arrived at the Ukrainian military checkpoint, to my question, how did the fighters live with the local people from Popasna, I was told: “No. We do not recognize them, and they do not recognize us. "Popasna, despite the fact that there are no military operations conducted there (except for single attacks, by the way, separatists), did not become Ukrainian. And so far there is a" non-recognition regime between the Ukrainian military and local residents "and will not. As though the patriots would not broadcast it."

No less interestingly described the mood of the residents of the “Ukrainian” Mariupol Georgian sniper (ideological fighter with the Russian "imperialism"), bravely fighting with the "terrorists" in the ranks of one of the battalions of the National Guard. To the question of the journalist of the network resource of the Georgian non-governmental organization "Free Zone" about how the local population relates to the Ukrainian army and volunteer battalions, he answered the following:

"The city of Mariupol is on the front line of the front, until June it was controlled by the militants" DNR ", but the Ukrainian security forces were able to knock the enemy out of the city and keep him under control. From the point of view of the land corridor to the Crimea, the city is of strategic importance for Russia.

The majority of the population, about 80%, is hostile towards the Ukrainian army. The locals are old, women with children approach our positions, they take GPS coordinates. Within an hour after the appearance of "civilians", the bombardment of our positions begins.

In the city to walk without weapons not safe, anyone can run up behind him and stab him in the back. ... Almost the entire population of the city is pro-Russian, and supports the "DNR". Despite the knowledge of the Ukrainian language, the residents of Mariupol speak Russian. They consider themselves Russians, not Ukrainians. "

Interestingly, after the text of this interview got into social networks with comments by bloggers, the editors of the network’s Free Zone resource (the purpose of which is to create a united front for the fight against a reviving evil empire from the Baltic coast to the shores of the Caspian Sea and the dignity of all the peoples of the former Soviet bloc ") hastily removed it.

Naturally, objective information about the real moods of the residents of Donbass, in the name of Ukraine’s national security, is concealed, but, nevertheless, the Ukrainian authorities are forced to reckon with it. After all the whole "Ukrainian" Donbass is, in fact, a powder keg that can explode at any time.

Just as Kiev is forced to act in accordance with the obvious truth that recaptured by the militia from the Armed Forces of Ukraine and the National Guard under the part of the Donbass is no longer Ukraine, and Ukraine will never be. Apparently, for this reason The Ukrainian president and the Ukrainian government have actually begun the process of recognizing the independence of the “DPR” and the “LPR”.

The first step towards this was the statement by the Prime Minister of Ukraine Arseniy Yatsenyuk, made by 5 November, that Kiev no longer intends to transfer funds for social benefits to the Donbass. This means Ukraine’s withdrawing from itself all social obligations of the state to the residents of Donetsk and Lugansk regions, which Kiev continues to officially consider as part of Ukrainian territory.

After that, in mid-November, Petro Poroshenko signed a decree "On urgent measures to stabilize the socio-economic situation in Donetsk and Lugansk oblasts," in which he ordered to evacuate all state institutions and courts from the territory controlled by the "DPR" and "LPR". In other words, Kiev, therefore, officially turned the remnants of the Ukrainian administrative and judicial system on the territory of the rebellious republics.

At the same time, by his decree, the President of Ukraine instructed, within a month, to stop servicing the bank accounts of enterprises and the public in the zone of "special operations in the east of Ukraine." As it was said in this decree, “The National Bank of Ukraine should take measures within a month to stop servicing banks of accounts, including card, open to business entities of all forms of ownership and the population in certain territories in the area of ​​the antiterrorist operation in Donetsk and Lugansk regions”.

And in the twentieth of November, the National Bank of Ukraine demanded that Ukrainian commercial banks cease all financial operations in the territories controlled by the “DPR” and “LPR”. As stated in the NBU telegram, "in accordance with the requirements of paragraph 1 of Resolution No. XXUMX, the banks of Ukraine suspend operations in settlements that are not controlled by the Ukrainian authorities. These operations include, in particular, operations for servicing accounts by banks, including card open to business entities of all forms of ownership. "

Thus, this actually means that the territories of the “DPR” and “LPR” are already outside the financial system of Ukraine..

Interestingly, this decision of the Ukrainian authorities caused a negative reaction even from the pro-Ukrainian mayor of Donetsk, Alexander Lukianchenko, who addressed Arseniy Yatsenyuk with a letter, and stressed that the cessation of the work of branches of Ukrainian banks "makes it impossible to make payments for utilities, cash collection institutions, the payment of postal, bank transfers and other vital financial transactions. " But the Ukrainian government does not care.

In response to these actions of Kiev, representatives of the “DPR” said that the republic’s exit from the hryvnia zone would be offset by the introduction of settlements in rubles. According to Denis Pushilin, most likely on the territory of the “DPR” a dual-currency financial system will be introduced, under which calculations will be carried out both in Ukrainian hryvnias and in Russian rubles.

In turn, Deputy Minister of Health Alena Tereshchenko said that in the “DPR” and “LPR” the supply of drugs would be stopped. As she explained, "in the territories that, unfortunately, are temporarily occupied, today we have no opportunity to supply drugs. We are law-abiding Ukrainians, and we must comply with the president’s decree and the government’s decision to ban all aid to the occupied territories."

However, this is not all that the Ukrainian government plans to do in relation to the rebel republics.

For example, according to BBC Ukraine, the head of the Ukrainian government, Arseniy Yatsenyuk, admits that Ukraine will provide Donbas with electricity and gas only in exchange for its coal. It is not difficult to understand that such an exchange indicates that Donbass in Kiev is no longer considered a part of Ukraine.

The people's deputy of Ukraine, Tatiana Chornovol, who passed to the Verkhovna Rada on the list of Yatsenyuk’s party, also 26 of October on Radio Liberty announced that the territory of Donbass, which is not under the control of Kiev, should be separated from Ukraine and disconnected from the gas supply. “The task of the authorities is to clearly describe the plans, how to achieve victory, how to end the war and what we will achieve as a result. I believe that the occupied part of Donbass should be separated from Ukraine. This is a winning option for the state,” Chornovil said.

Apparently, it is this “victory plan” of separation of Donbass from Ukraine that the Ukrainian government is now implementing. The bankruptcy of the Ukrainian state makes its leadership de jure recognize the loss of Donbass.