"South Stream" and the impotence of the European Union 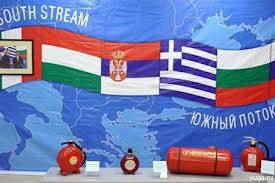 Despite the growing opposition from the United States and the European Commission, the Russian project to build the South Stream gas pipeline is being carried out as planned. Now the main preparatory work is being carried out on the pipeline section passing through the Black Sea. Next year, construction will begin on a section passing through the territory of Hungary.

Taking the project to full capacity - 63 billion cubic meters of gas per year - is expected in 2018. This is more than a third of the volume of gas supplied by Russia to Europe today. In 2013, Gazprom’s supply to European partners amounted to 162,7 billion cubic meters of natural gas. According to Gazprom’s Chairman of the Board Alexey Miller, this is the maximum value history Russian and Soviet gas industry. " The share of Gazprom in the European market is currently reaching over 30% in gas consumption and 64% in gas imports. The Russian company is the number one European supplier.

For comparison: the sensational, but not accomplished, gas project of the European Union Nabucco initially envisaged deliveries to Europe bypassing Russia of 26-32 billion cubic meters of gas per year, that is, two times less than South Stream can provide. And even such volumes to the initiators of the Nabucco project were not under force. During 2012-13, the Hungarian company MOL, the German energy company RWE, and the international consortium for the development of the Azerbaijani gas field Shah-Deniz consistently left the project. And in June, 2013, the Austrian gas company OMV Gas GmbH, who led the construction consortium Nabucco, officially announced the cancellation of the project.

Now the attention of the European Commission has shifted to the construction of the TAP gas pipeline, through which gas from the Caspian fields must pass through Greece and Albania to Italy. However, its planned capacity is even lower than that of Nabucco. The failure of the Nabucco project has become a strong argument in favor of the lack of alternative cooperation with Russia in the gas sector. “Nabucco will not be built. After ten years of hesitation, and especially in the light of the situation in Ukraine, we are forced to act. This is a necessity, ”said Andras Aradsky, secretary of the government of Hungary on energy issues. “We will implement this project because we are convinced that it will significantly increase the security of gas supplies to Central Europe, and we believe that South Stream is of European interest,” said Hungarian Foreign Minister Peter Siyarto.

Having failed in economic competition with Russia in the field of gas transportation, the European Union is now trying to block projects of a more successful competitor by political means. The stake was made to force the European countries participating in the South Stream to refuse to fulfill intergovernmental agreements with Russia under the pretext of the need to comply with the provisions of the Third EU Energy Package, which provides for the separation of gas sales and transportation business. However, the provisions of the Third Package were developed in 2009 year, after the conclusion of the intergovernmental agreements on South Stream. Brussels, contrary to the generally accepted international legal norm, is trying to give these provisions retroactive force.

Even from Serbia, which is one of the key participants in the South Stream project, but is not part of the European Union, they demand to suspend participation in the Russian project. . The construction of the South Stream was one of the main topics at the recent talks in Belgrade between the Foreign Ministers of Serbia and Hungary Ivica Dacic and Peter Siyarto. And the parties unequivocally stated that the construction of this pipeline is of "common interest for the whole of Europe."

By blocking the construction of the “South Stream”, the European Commission actually invites Europeans to remain hostage to the transit of gas through Ukraine with its political chaos, financial inconsistency and civil war. They are pushing the United States to do this ... To compromise relations between Brussels and Moscow is one of the key points of the American geo-strategy. Hungarian Prime Minister Viktor Orban bluntly states that Washington is putting pressure on his country because of cooperation with Russia in energy issues, “for fear of rapprochement between Moscow and Budapest”. Claudio Descalzi, General Manager of the Italian ENI concern, during a meeting with Gazprom CEO Alexei Miller on November 24, assessing the significance of the South Stream gas pipeline, confirmed that the creation of new supply routes would provide European consumers with the required gas volumes for the long term.

Brussels, however, continues to undermine its own energy security in favor of geopolitical plans of overseas origin.