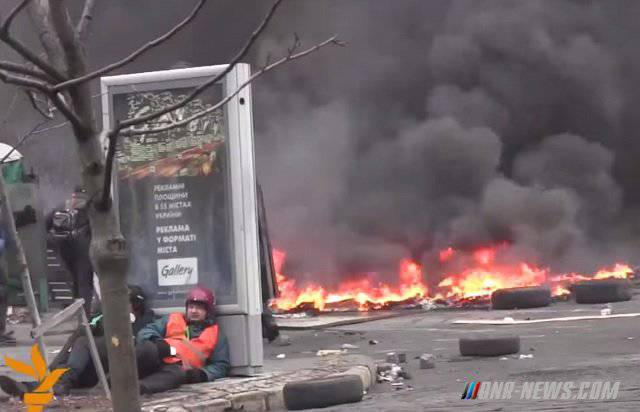 "These days, there will be hundreds of texts in which authors will be remembered with pain the Revolution of dignity. I'm not going to make up a quivering tear. I'll try to hint what will happen next.

... And then any new Maidan will be officially named the project of the Kremlin. Because against the background of the threat of losing statehood, any internal Maidan will lose its positioning. The president, together with the prime minister, will call him Putin’s insinuation with the aim of overthrowing the unwanted power in Kiev. And so the new Maidan will be shot with even more zeal than the Yanukovych snipers did. Because this time the Maidan will be liquidated with the words "Glory to Ukraine" and with sincere faith "for the sake of the interests of Ukraine."

... And then no intelligent person will ever climb under the bullets for the sake of an idea. Because the previous Maidan taught: this is a meaningless, useless death. After the shock experienced on the shot Maidan, it is unlikely that even one 17-year-old youth will appear who is so safe, so bravely will go with his bare hands against the authorities. Not a single father and mother will ever let go of their child to the Maidan. Not because the people turned into cowards - because not a single heroic death is worth a country that does not change. Nobody remembers the relatives who lost their loved ones on the Maidan. Cripples who have lost their limbs, eyes, hands and other organs on Maidan are forgotten. Heroism rested in Bose. Maidan deprived of meaning such a thing as posthumous heroism. On the Maidan now go to kill the enemy, and not vice versa.

... And then there will be violence. The next Maidan will attack, not defend. He will shoot first. Thousands of trunks looted at the beginning of the year are waiting for their time. Every ATO member will also pull home. weapon - need. The militarization of passionaries is a direct result of the impotence that the previous Maidan spawned. Powerlessness is the challenge that will face the society of the contemptible and deceived.

... And then the last hope is only for “protivs” (who vote against all. My translation). The next (and, undoubtedly, the best) state can only be re-created by “protvsykhs” - products of radical postmodern, which do not recognize the very principle of delegating power to these, as if softer to put it, “politicians”. It is difficult for party adherents to admit that the Euromaidan was launched by these very "protvshihs" - apolitical activists and students who threw the call "Without politicians". And they would have won if it were not for the opposition leaders, who converted the energy of Maidan into their personal successes. Yes, it is Protyvsikhi who are the authors of the Revolution of Dignity. This event received such a beautiful poetic name precisely because a segment of “protyvsikhs” entered the arena, who said: we do not trust any politicians, so we went beyond ourselves, for our right, for our dignity. Protyvsikhi lost a year ago. But it is they, indignant and driven to rabies, have the greatest chance of becoming a generator of new disturbances. Because once again they were convinced: it was impossible to give the Maidan into the hands of the party leaders. Now the "protest" will not give anything to anyone. They will take revenge in full.

... And then any new Maidan will not have a political leader. He will not lead to a new power. At the present power ends bench in Ukrainian politics. For them - no one. Wasteland. In this country there is only power against society. No third force. All the so-called impassable - non-revolutionary, so they should not be taken into account. Consequently, the potential Maidan will become anti-political. It will be directed against politicians as a species. It will not provide for the transfer of power to those on the way, for such does not exist in nature. The new Maidan will be antisystemic, and therefore destructive. Behind him there will be no power that can re-create a new state on the ruins of the previous one. This will be an act of large-scale destruction without an emphasis on consequences.

... And then every day the feeling that we were “raped” will strengthen. Soon it will turn out who signed the tender to someone, who refinanced whose banks, earned on the dollar exchange rate, who reprinted the hryvnia, who lives in what mansion, and who negotiated with whom at that time, someone nameless died in the ATO zone every day . Stupid promises will be remembered. Awareness of "we were raped" will be the foundation of the revenge of those people who are very hard and strained endured every stress.

... And then the psychosomatic face of the alleged Maidan will be terrible. It should remind those smiling boys and girls who were treated with a hot tea "golden eagles", affectionately chanted "We are for Europe" and creatively painted their faces in blue and yellow colors. No, it will be a grimace. Every month after the Revolution of Dignity, the number of people who crossed the border of premeditated murder multiplies. They no longer have a psychological barrier in front of a headshot. Everywhere will sound strong three-story mat. From the mouth of hate and very argued anger. It will be unpleasant for us to look into the eyes of this ugly Maidan. But it is he who will become our collective mirror.

... And then there will be a continuation of the drama. The eternal Ukrainian drama, which is mixed in on the inability of politicians to repel the giant temptation to "mow" the loot. A state built like this: power earns, and the people wait. This drama will give us many more climaxes, but it does not imply a happy ending. Because it does not matter with what emotion you go to the Maidan. Either you go out to smile and jump, or you go out to show unprecedented heroism and recklessness, or you go out to burn cars and smash windows, or you go out to shoot the hated corrupt officials - you still sign in your weakness to create the state. You still become a street. And the street knows only one language - "to mess things up and go home."

Thousands of Heavenly Hundreds may appear in this country, but those slain will remain in the "Other" folder. Because we do not know how to create a state in which I want to live. This we can not afford. It is beyond the power of the politicians we voluntarily choose. It is beyond the power of even the younger generation, which is easier to get out of here. We can only fight chances from time to time - and again not lose the opportunity to lose them. Nothing teaches us anything. For we are the eternal stateless revolutionaries who grow up a dragon for themselves, against which later, when he feeds on his belly, it will not be a shame to fight.