December 1 2014
9
For sea trials, a rescue ship "Igor Belousov" of the 21300 project is being prepared. The main task of this vessel will be to participate in the rescue operations of the crews of submarines, as well as to ensure the work of divers at depths up to 450 m. To perform such tasks, the vessel must receive the Bester rescue device of the 18271 project and two submarines APC-600. However, the basis of equipment for underwater work is the deep-sea diving complex GVK-450. 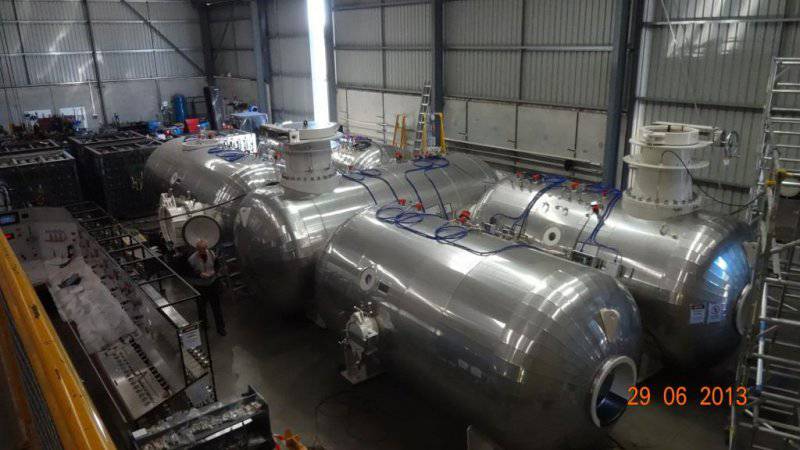 The first units of the diving complex for the new vessel were made in the summer of 2012. By the beginning of autumn 2014, the manufacturer had transferred all the components of the complex to the Admiralty Shipyards (St. Petersburg) shipyard. Not so long ago, the installation of the GVK-450 complex was completed, and soon it will be ready for tests, which are scheduled to begin next year.

The development of the diving complex GVK-450 started in the middle of the last decade, but for some reason was delayed. Initially, the creation of the system was carried out by the Central Design Bureau "Lazurit" (Nizhny Novgorod), which was assisted by a number of enterprises, including Moscow company "Tethys Pro", which produces various diving equipment. According to reports, the first version of the draft GVK-450 was developed by the beginning of the current decade, but did not suit the military. The share of domestic components in the complex did not exceed 25-30 percent, because of which the customer decided to change the composition of contractors.

Ultimately, it was decided to transfer the status of the main contractor to Tethys Pro, which, in collaboration with Divex (United Kingdom) and the Almaz Central Marine Design Bureau (the rescue ship developer), was to develop a new version of the deep-sea diving complex, and then start its production. It was in this line-up that the contracting companies continued their work.

The main problem that had to be solved when developing the GVK-450 complex was ensuring the work of divers at depths up to 450 m under conditions of a corresponding high pressure. Such requirements led to the formation of an interesting appearance of the complex, which should ensure the work of divers for a long time.

Such phenomena accompanying the work of divers as compression and decompression are widely known. Under the influence of ambient pressure in the tissues of the human body, nitrogen and helium accumulate (this phenomenon is called compression), which must be removed by gradually lowering the pressure to normal values ​​(decompression). If the pressure changes too quickly, so-called decompression or decompression sickness: dissolved gases form bubbles in the blood that can block blood flow or damage tissue. 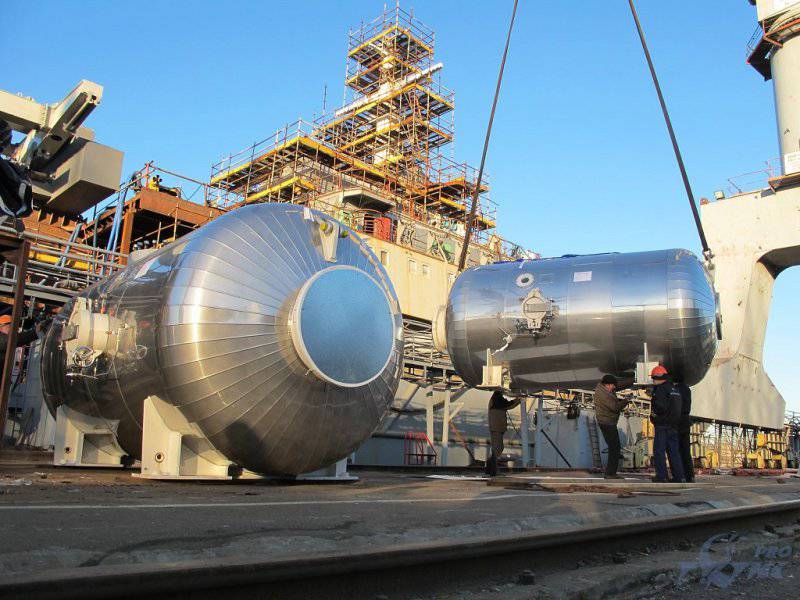 To avoid injury, divers should slowly rise to the surface or use special pressure chambers. It should be borne in mind that the time for decompression is directly related to the time that the diver spent at depth. So, after an hour at a depth of 100 m, a diver must spend about 14 hours on decompression. With increasing depth, such periods increase significantly.

The basis of the deep-sea diving complex GVK-450 is the idea of ​​a long stay under pressure. Approximately three days after being under pressure, the tissues of the body no longer absorb nitrogen and helium, after which the time required for decompression does not change. In the context of diving work, such saturation allows a specialist to work at a depth of several hours and then rest in a pressure chamber with appropriate pressure. Such work may continue for several weeks.

When ensuring the work of deep-sea divers, the complex GVK-450 should work as follows. In its residential pressure chambers are located up to 12 divers. Within a few days they are under the control of specialists undergo compression, after which they can dive to the work site at depths up to 450 m using a diving complex. It is assumed that divers will work for six hours in three-person shifts. The same air pressure when working at depth and while on board a ship will allow only one decompression after all work is completed. 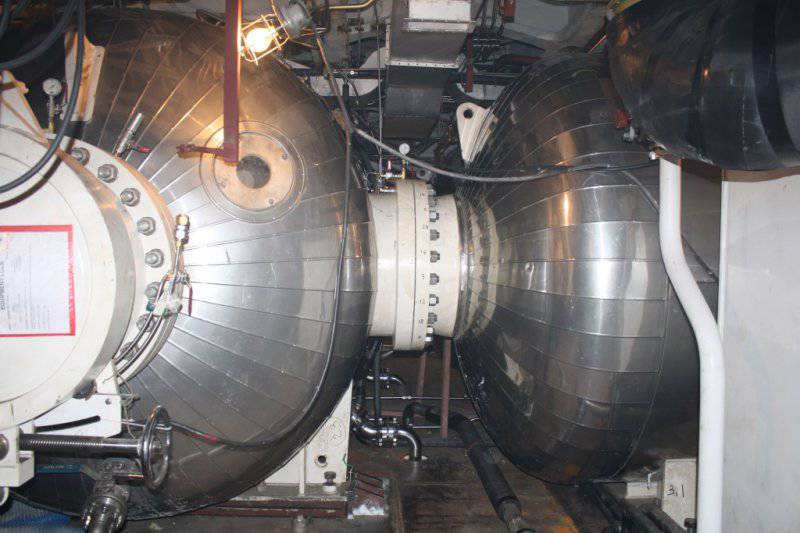 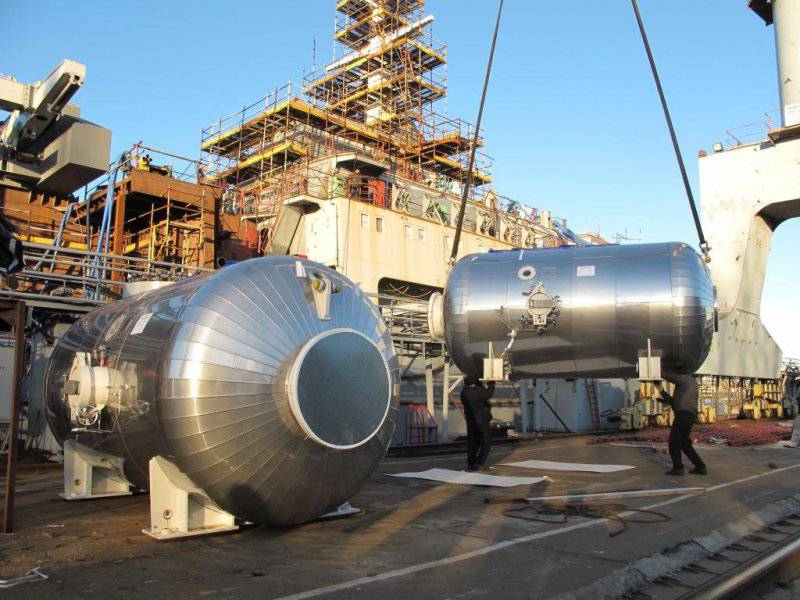 The central pressure chamber is a gateway designed to prepare for diving and to move from the living quarters to the diving bell. The bell itself is located on the deck above. There is also a rail track to move the bell to a vertical shaft, along which it falls into the water and rises back. The lower exit of the mine is located on the bottom of the vessel.

Diving bell complex GVK-450 has a sealed durable housing, which has a number of systems. There is communication equipment, including video surveillance, emergency systems, etc. The bell is lowered to the working depth with a steel cable. In addition to the cable, it communicates with the vessel with the help of several hoses and cables, through which breathing mixture and electricity are supplied. During the exit of the deep-water diver, the gas mixture is fed into his spacesuit, exhaled gases are diverted to the vessel, where they are cleaned, enriched with oxygen and returned to the back. In addition, the spacesuit has a heating system that provides a more comfortable long stay at depth.

According to reports, it is proposed to lower three divers to the working depth with the help of a diving complex. Two must do the necessary work, and the third will remain at the bell, watch over their colleagues and, if necessary, help them. The ability of divers to stay in the 12 pressure chambers allows organizing shift work. In this case, after raising the first three divers, going to rest, other specialists may occupy the place in the bell. Thanks to this, it is possible to ensure almost uninterrupted work of divers at the facility. Breaks in work will be necessary only for lifting one shift and lowering the other.

The proposed method of prolonged dwelling under pressure greatly simplifies the tasks, although in this case the work of deep-sea divers cannot be called easy. From the beginning to the completion of the work, specialists will have to continuously remain in difficult conditions of high pressure and in an atmosphere of helium-oxygen mixture. In addition, the stay in the pressure chambers is complicated by the need for a long stay in a confined space.

To date, the specialists of the Admiralty Shipyard and Tetis Pro have completed the installation of all units of the GVK-450 deep-sea diving complex and have begun commissioning. Upon completion of this stage, the complex will be tested and will be ready for preliminary and interagency tests. According to the latest data, all necessary work will be completed by next spring, by the beginning of navigation. Roughly in April 2015, tests of the diving complex as part of a new rescue vessel will start. If all the work goes without serious problems, the ship "Igor Belousov" will be transferred the fleet until the end of next year. 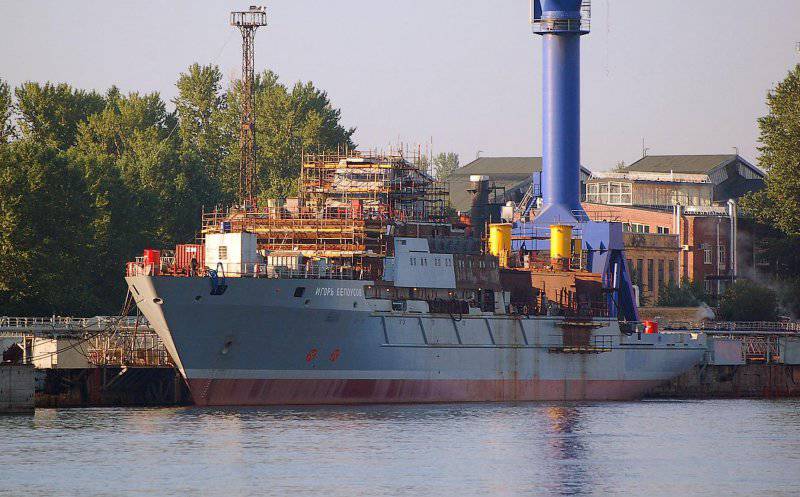