Where the ships go

December 1 2014
27
Modern ships are able to walk for decades on the seas and oceans, before their repair becomes economically unprofitable. When their lifespan comes to an end, around 90% of huge ships end up off the coast of India, Pakistan, Indonesia, or Bangladesh, where cheap labor resides. 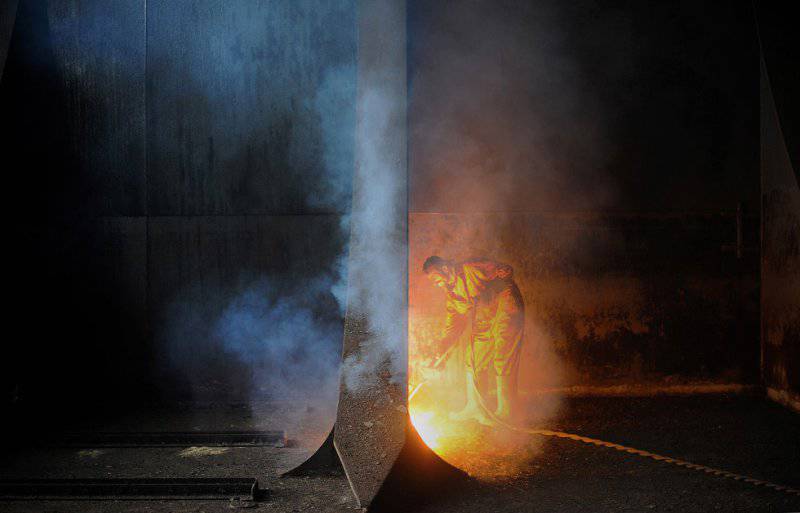 Old ships are built along the coastline, and then they are pulled apart with hammers and blowtorches until at least something can be sold or recycled. 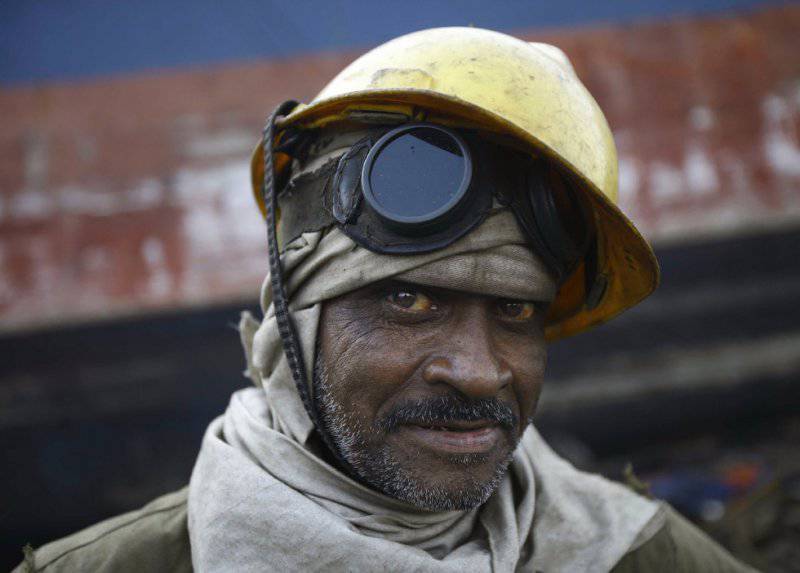 2. Gaddani, Pakistan, July 10 2012. Work is underway to remove the skin of the ship. In the upper left of the vessel are visible people who help assess the scale.
This place is located in 40 kilometers from Karachi and is one of the largest sites for the analysis of old ships. About 10 000 workers send ships here on their last journey. On average, it takes about three months for the 50 worker to disassemble the old medium-sized ship with a displacement of 40 000 tons per piece. This is hard and dangerous work. Workers get about 300 dollars a month, half of which goes to food and rent, and they work 6 days a week. (Photo by Roberto Schmidt | AFP | Getty Images): 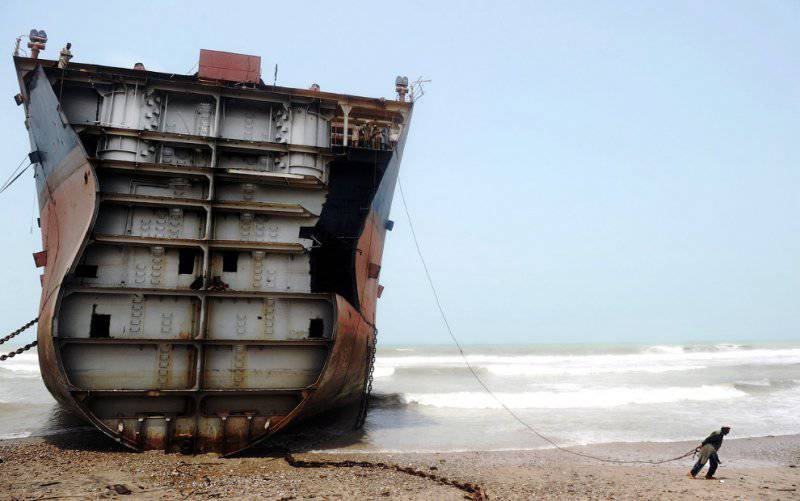 3. All the work here is manual. Here the workers cut a piece of metal from the ship with a torch. Pakistan 25 November 2011. (Photo by Reuters | Akhtar Soomro): 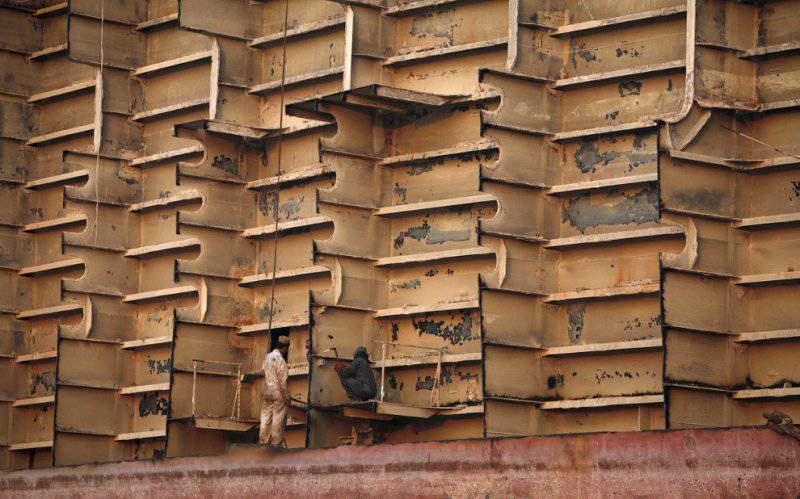 4. And this is a satellite view of the ship graveyard in Chittagong, Bangladesh. (Photo © Google, Inc.): 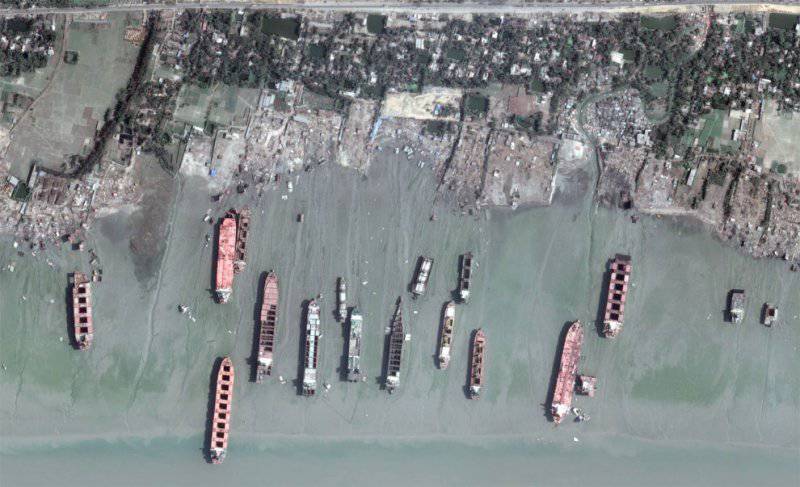 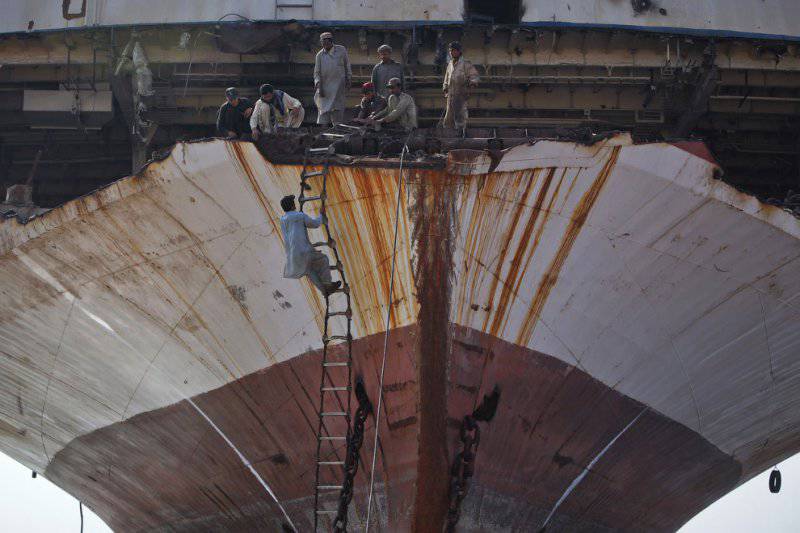 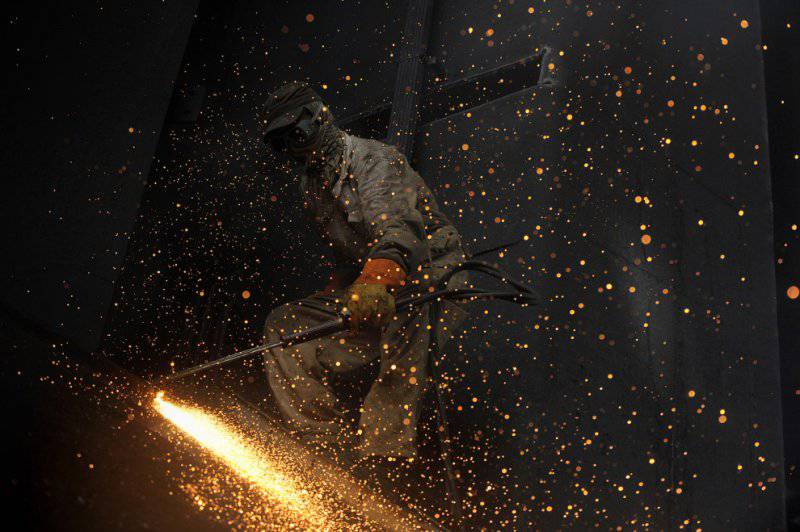 7. But almost dismantled the ship. Ship recycling in Chittagong pollutes the coastal zone with a length of 20 km. (Photo by Reuters | Andrew Biraj):

8. People of all ages, Mumbai 21 December 2006, are engaged in ship debriefing. (Photo by Reuters | Anuruddha Lokuhapuarachchi): 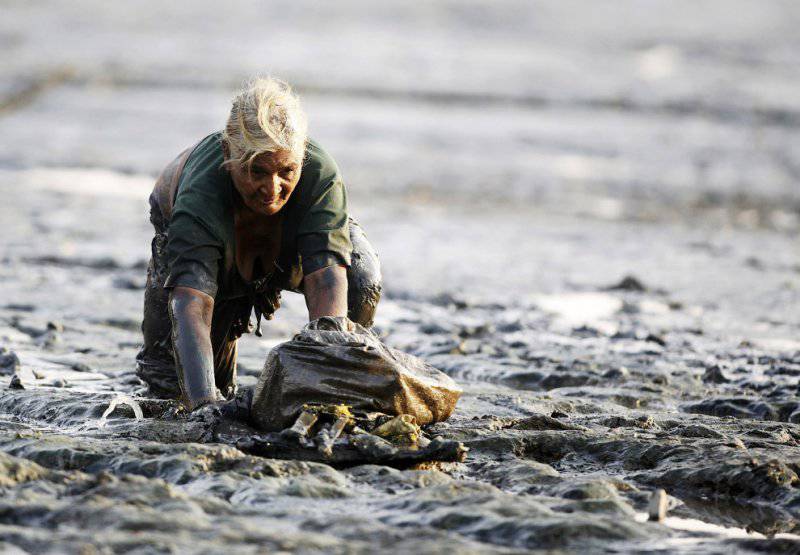 9. Workers are pulling the cable to separate the part from the ship, 25 November 2011. (Photo by Reuters | Akhtar Soomro): 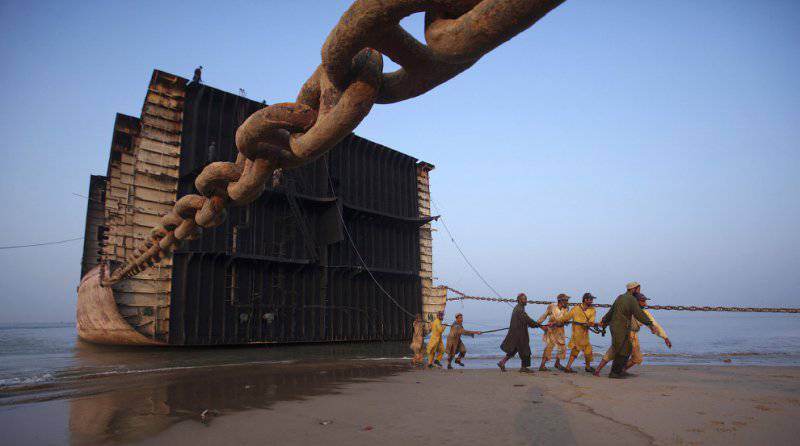 10. Trolley used to launch parts of the ship to the shore, Gaddani, Pakistan, November 25 2011. (Photo by Reuters | Akhtar Soomro): 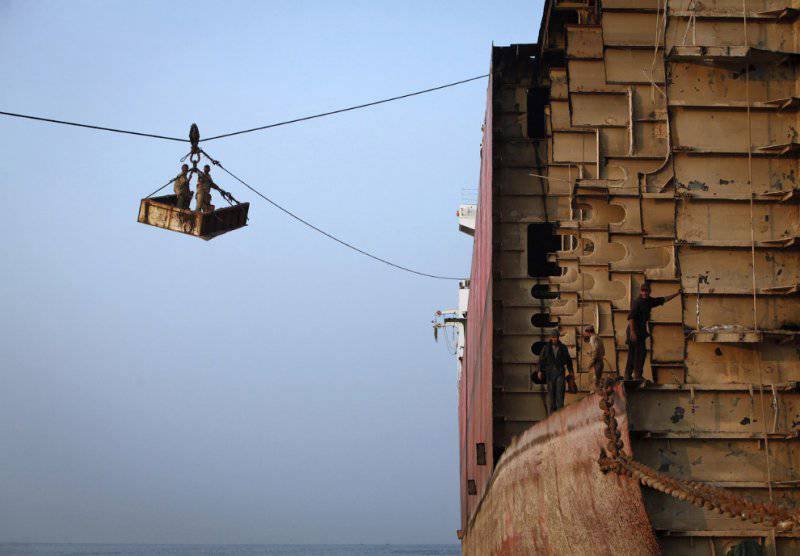 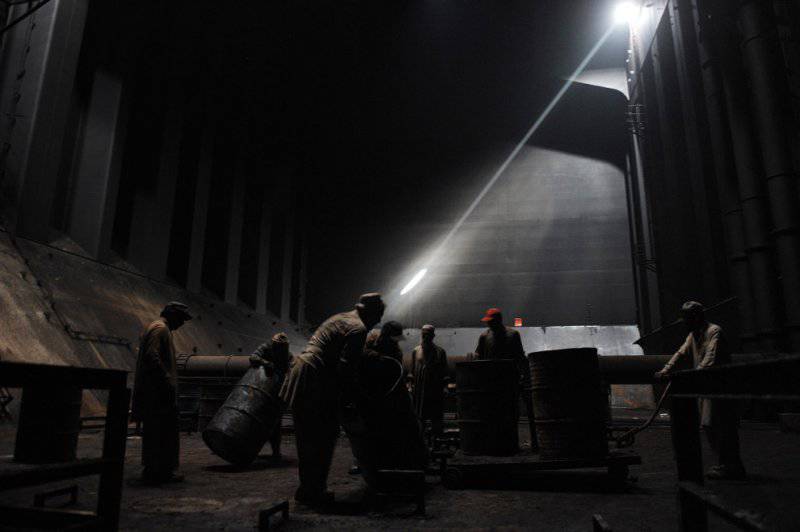 12. Hunky from Jakarta, Indonesia. Gets about 5 dollars per day. (Photo by Ulet Ifansasti | Getty Images): 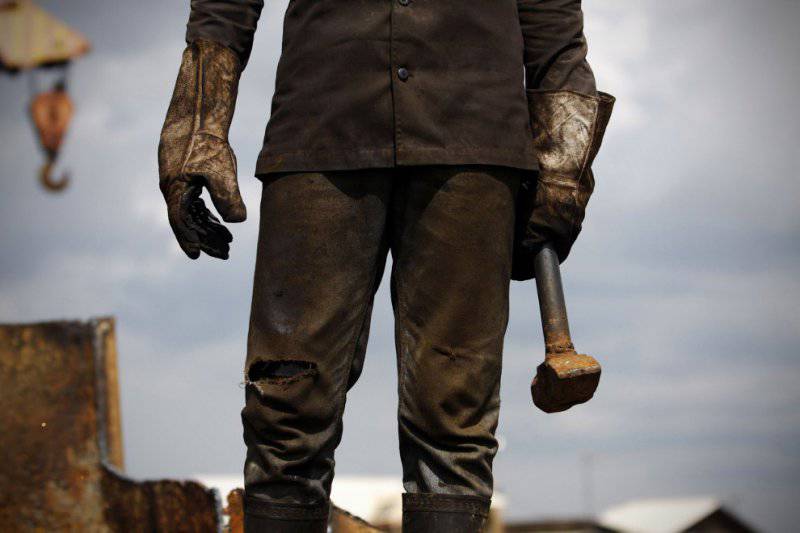 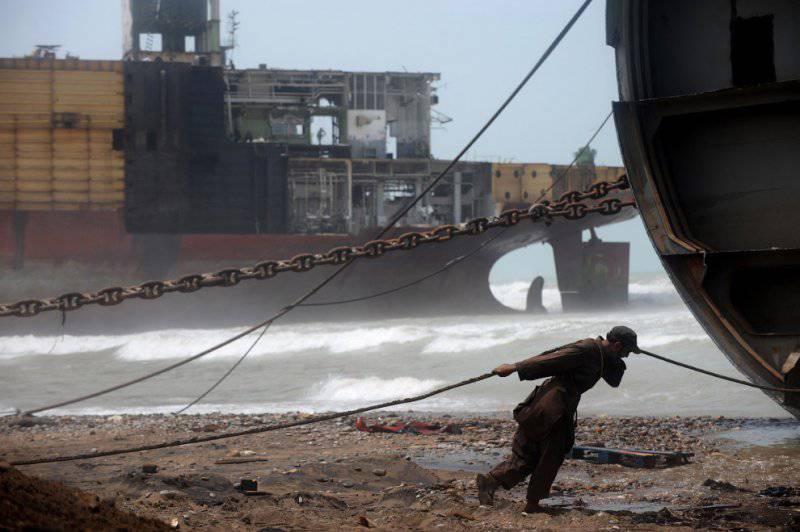 14. Coast of the dead ships in Alang, which is in 50-km from Bhavnagar, India. View from the satellite. (Photo © Google, Inc.): 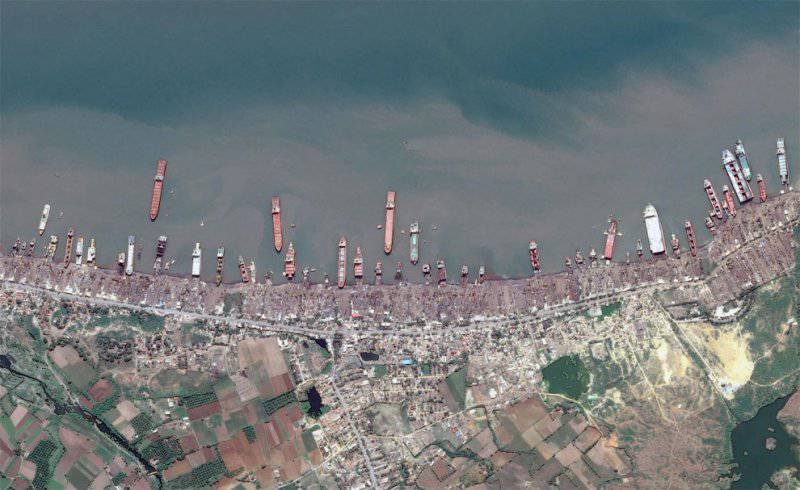 15. Portrait on the background of an old ship in Chittagong, Bangladesh, 19 August 2009. (Photo by Reuters | Andrew Biraj): 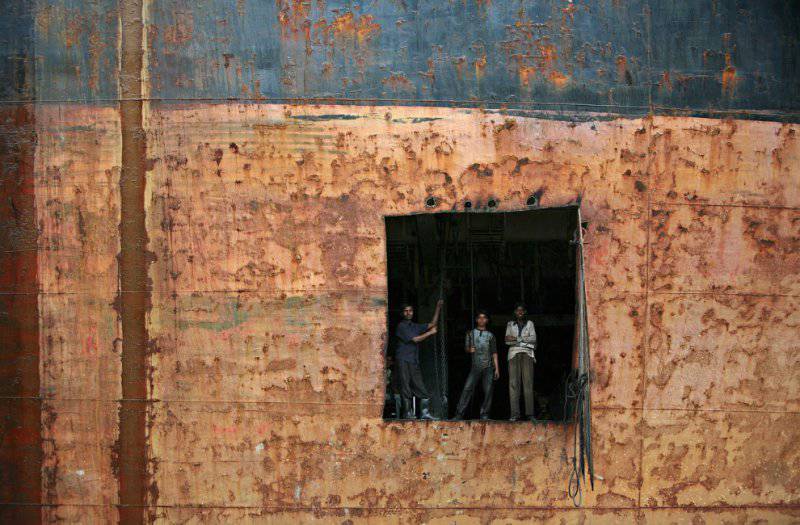 16. This, by the way, is the first Indian aircraft carrier Wickrant, Mumbai, India, November 22, 2014. The Vikrant was originally built at Royal navy Great Britain under the name HMS "Hercules" (R49). The ship was laid down at the shipyards of the English company Vickers-Armstrong during World War II in 1943. (Photo AP Photo | Rajanish Kakade): 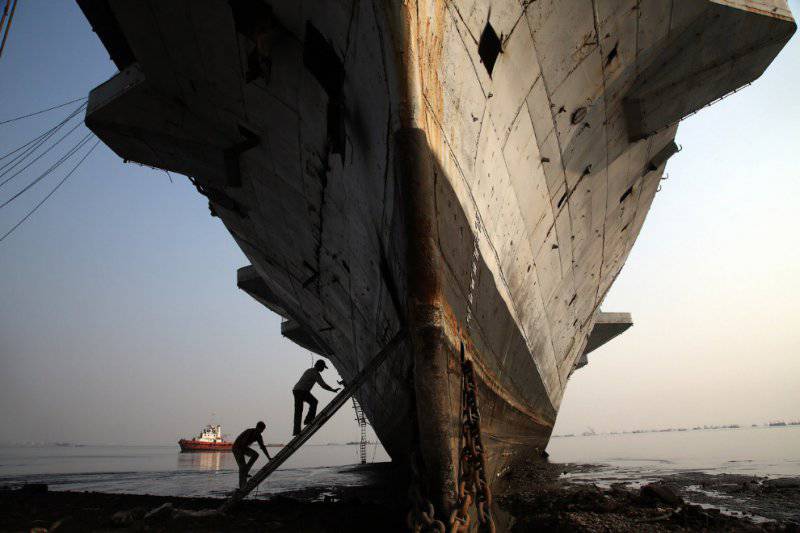 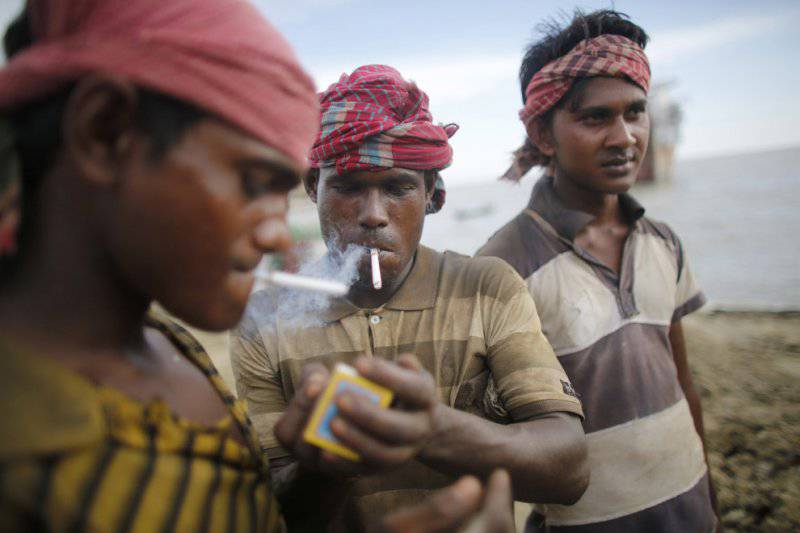 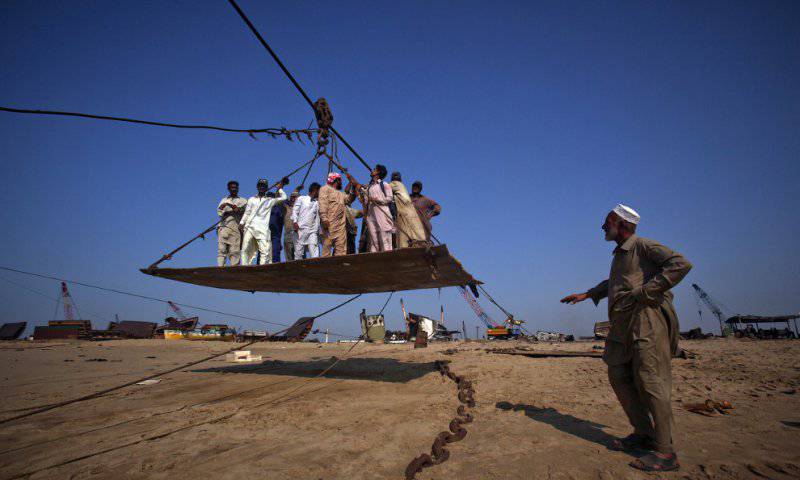 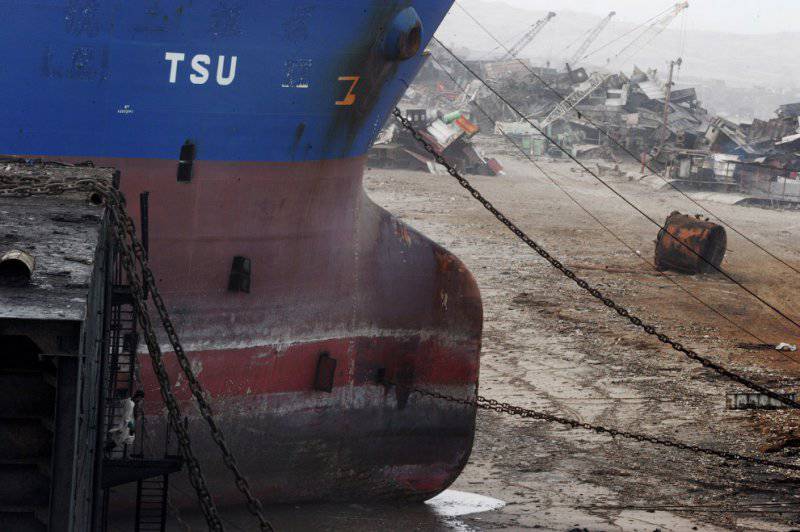 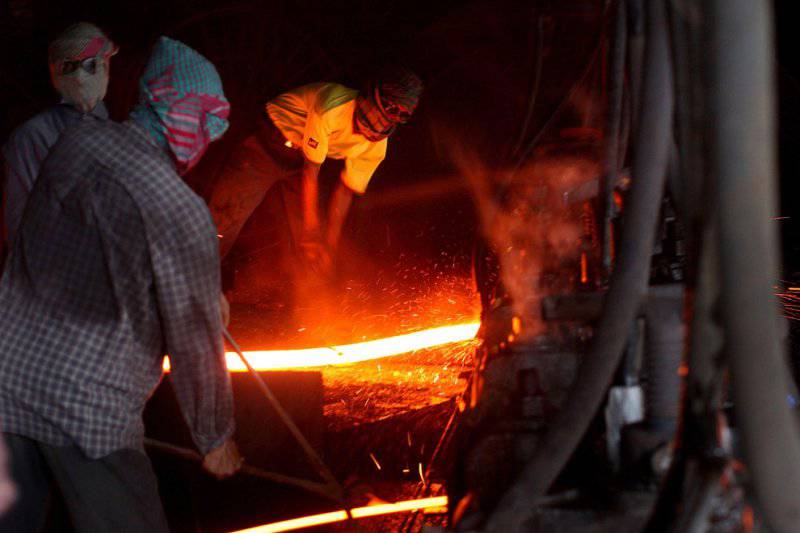 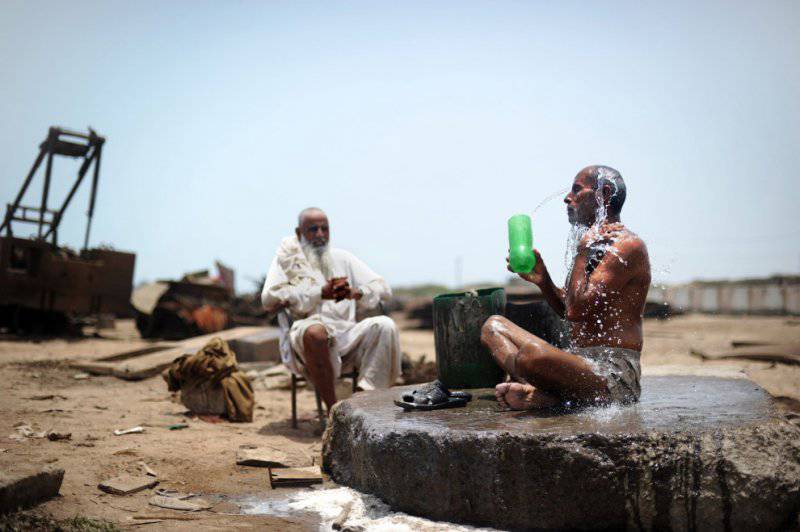 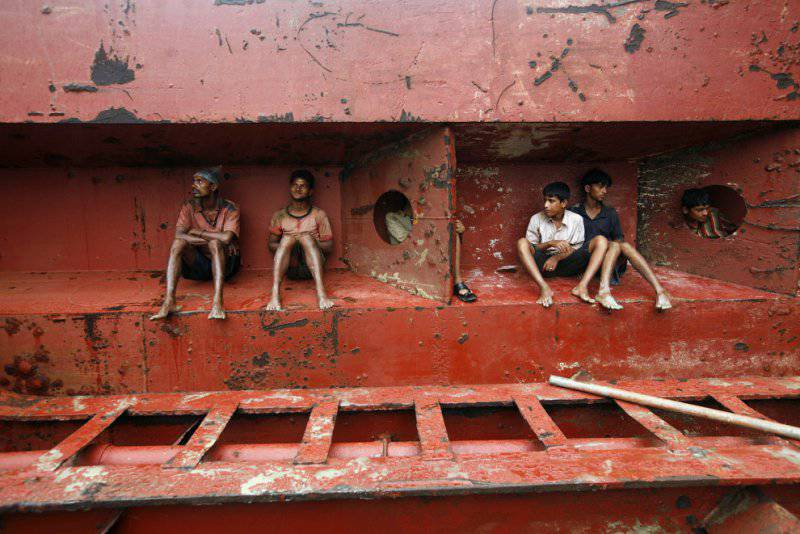 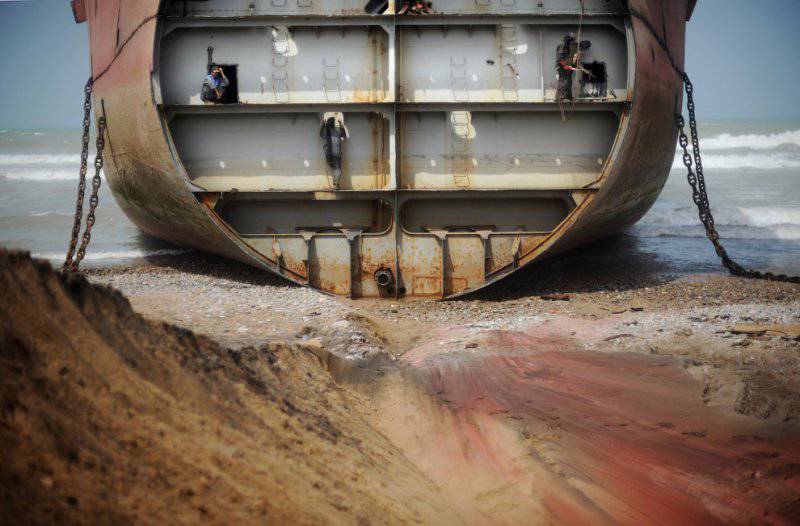 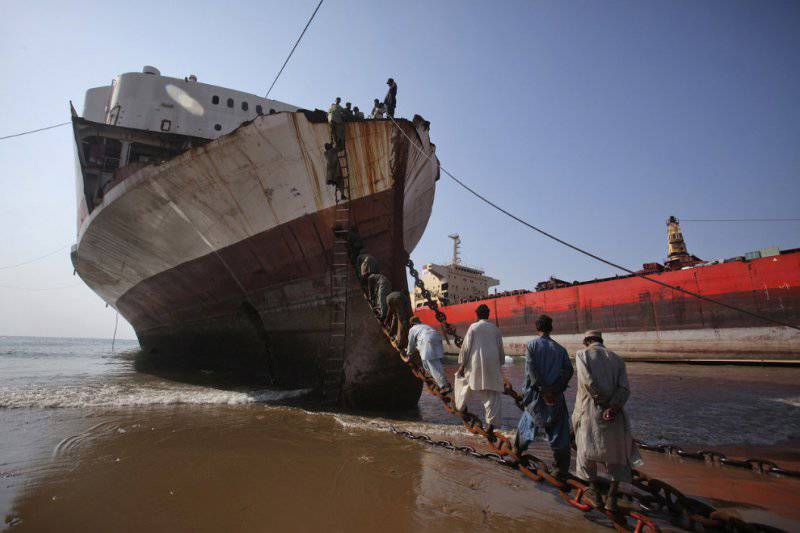 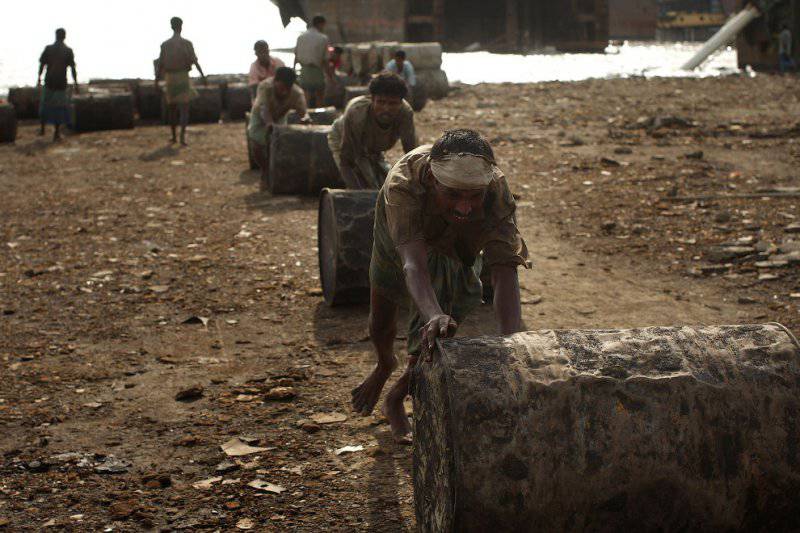 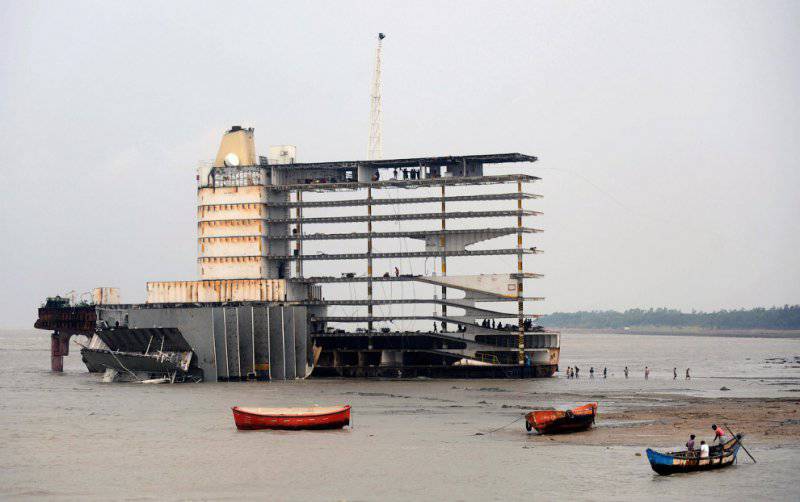 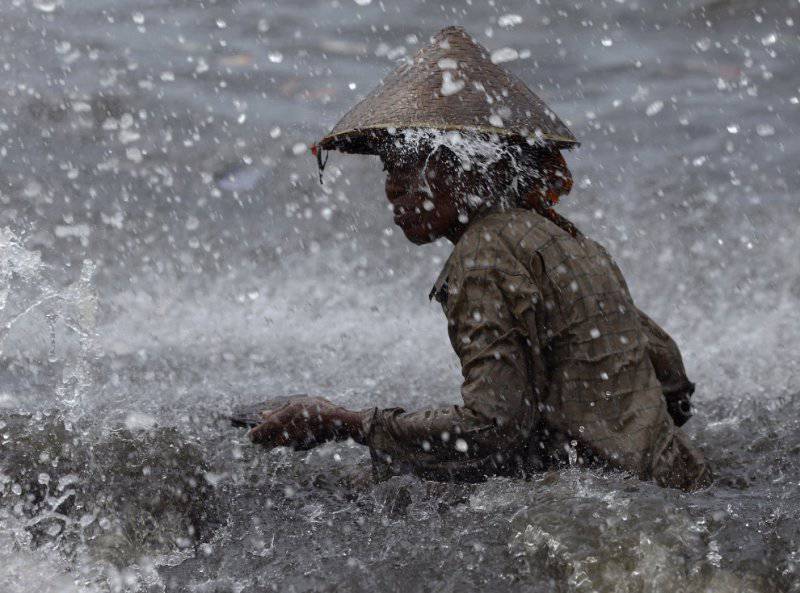 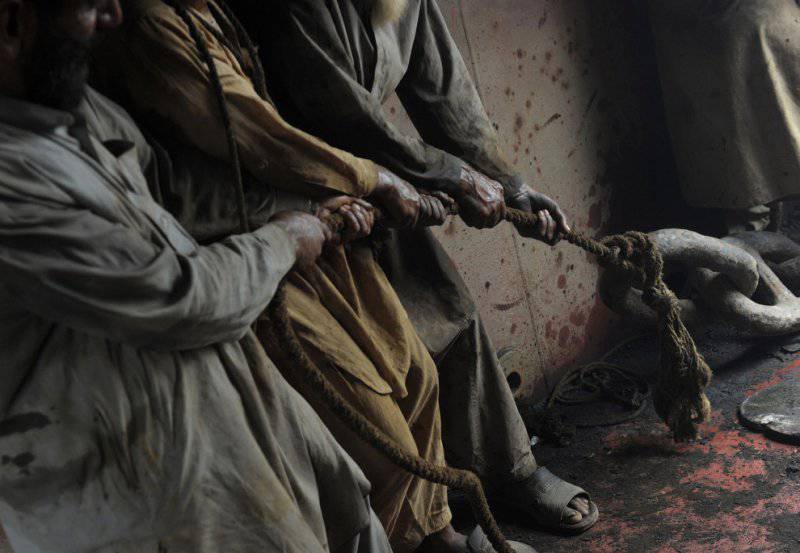 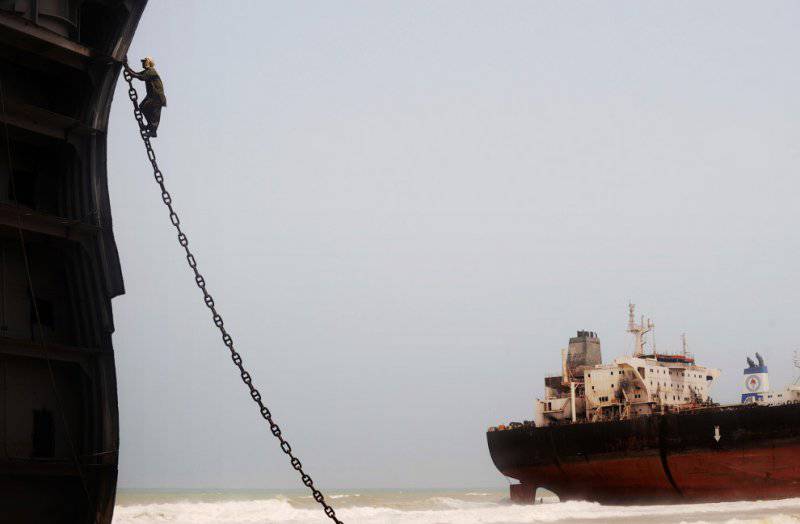