Kolpachenko: marines must comply with the constantly changing environment in the seas and oceans

November 27 2014
24
New threats arising in the seas and oceans require the immediate response of Russian marines and their participation in anti-terror groups, Alexander Kolpachenko, head of the Coastal Forces of the Russian Navy, told reporters. Reports about it RIA News. 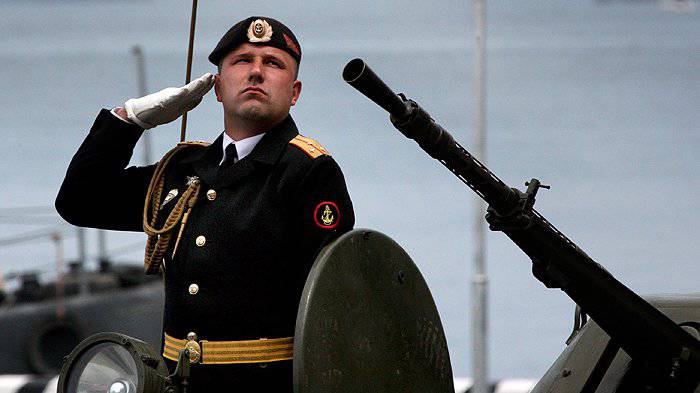 Today, the Marines celebrate their professional holiday in Russia. This year marks the 309 anniversary of the creation of the Russian regular marines.

“This practice is necessary. The situation in the sea is changing and is not static. There are new threats. This is maritime piracy, drug trafficking, terrorism at sea. And the marines must constantly learn to respond to these threats. We will strive to ensure that the quality of training combat missions at sea increases, ”said the general.

He recalled that not so long ago a training center for training marines was established in the Leningrad Region. “Training is conducted there with regard to modern requirements, with an emphasis on performing special tasks. The development and improvement of new tactical methods is being carried out, training grounds for special tactical training and survival have been equipped, Mi-14 and Ka-27 helicopters have been installed to test ground elements of a parachute jump and landing assault, ”Kolpachenko said.

He noted that there is still an imbalance in the armament of the Black Sea Marines fleetbut it will be eliminated soon.

“It was difficult for us in the recent past to update the fleet of equipment and weapons of the Black Sea marines. Now this opportunity has appeared, and we will implement it in accordance with the objectives of ensuring stability in the southern directions. The imbalance will be eliminated, ”the general promised.

According to him, the re-equipment of modern weapons models is increasing, “modernized missile artillery weapons (self-propelled howitzer 122 SG 2X1X1) and KamAZ and UrAL cars are entering the Russian Black Sea fleet.

“I can say that the car park has already been replaced by 70-90%. Marines receive modern samples of small weapons, means of combat equipment, including the Corsair-MP floating body armor that has no analogues in the world. This work will continue, ”added Kolpachenko.

He also noted that service in the Marine Corps is currently at its peak of popularity.

“Service in the Marine Corps under the contract is at the peak of popularity. After all, it combines the three elements - the sea, air and land. Interest in the marines continues unabated. A significant role began to play competitive forms of training marines. They contribute to increasing interest in the profession of a marine of the Russian Navy, ”the major general said.

“The prestige of the marines began to rise thanks to the competitions“ Naval Derby ”and the campaign to recruit“ in one place at the same time ”started at the mobile selection points in the Defense Ministry in spring. In addition, campaign work is carried out among the population, conscripts, on the recruitment of contract servicemen, ”he explained.

The level of training of troops is constantly being improved. According to the results of the Vostok-2014 strategic exercises, the actions of the Marine Corps deployed in Kamchatka were highly appreciated.

“The actions of the Black Sea Fleet Marine Corps and the Caspian Flotilla in the Crimean Federal District, the battalion tactical groups of the Northern and Baltic Fleets on unfamiliar training grounds during interspecific combat training in the southeast showed that the combat readiness of the units, military units and marine infantry units allows set combat training tasks. But there is no limit to perfection. We cannot rest on our laurels, ”stressed Kolpachenko.
Ctrl Enter
Noticed oshЫbku Highlight text and press. Ctrl + Enter
We are
27 November - Marine DayToday, the servicemen of the Submarine forces of the Russian Navy celebrate their professional holiday - the Day of the submarine
Military Reviewin Yandex News
Military Reviewin Google News
24 comments
Information
Dear reader, to leave comments on the publication, you must to register.