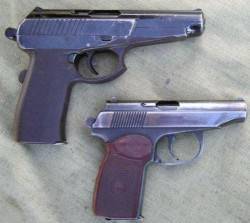 How our army is being re-equipped with Western weapons

Announced the possibility of creating a joint Russian-Italian enterprise for the development and production of new types of small arms. The basis for a promising product to begin with is one of the Beretta pistols.

Top military officials are eager to rearm their subordinate army with the most advanced weapons, from their point of view. According to their understanding, it is now being produced only in the West, where they are going to buy it for the domestic armed forces. The contract is being finalized for the French Mistral-type amphibious assault ship. Negotiations will be held on the purchase of French combat ammunition. The possibility of license issue of Italian armored cars in Russia is being considered. And recently, we were told about a sensational and, at the same time, sad news. It turns out that our situation with the production of small arms is very bad. And the quality of it does not meet modern requirements, and the design is not the same. Here in the West, that neither a rifle, nor a pistol - so simply a sight for sore eyes. And we have? Almost an ax worked. So in a short time, and this is quite realistic, mass purchases abroad of beautiful and very modern machine guns will begin.

Of course, in the Ministry of Defense now the tone is set not by the military professionals of the General Staff, but by the civilian advisers of the minister. And it would be possible to write off this admiration for Western technologies on their innate and purely civilian mentality. This mentality was formed in this way: since the domestic auto industry cannot produce its own civilian vehicle of good quality and comfort, then we cannot do a good armored car on our own in principle. For those who work in the Defense Industrial Complex, the point of view is somewhat different. But! Now and in the defense industry, it seems, there is a revaluation of values. And this is due to the new type of management.

At the end of May, Vladimir Grodetsky, one of the leaders of the domestic defense industry, the general director of the Izhevsk machine-building enterprise, Izhmash, issued such information that all professional gunsmiths of Russia fell into a stupor.

That is why they kept silent, although it seemed that there were more than reasons for outraged statements ... According to V. Grodetsky, who quoted many news agencies, there are no replacements in the Russian army with a large-caliber Stechkin, but Beretta produces them. And further: “If an agreement is reached on the joint production of such pistols, then God himself ordered it to be done on the“ Hammer ”, where Stechkin is produced.

Here, not a word, only one question marks. Vladimir Grodetsky is a top manager of the new formation, he is in favor with Sergei Chemezov himself, the head of Russian Technologies themselves. Nor is he a casual person in the defense industry, but a highly qualified specialist, one might even say, of Soviet training. V. Grodetsky was a radio engineer by training, and in the main profession he reached great heights. He worked for a long time and very successfully during the Soviet era on Cosmos. In the early nineties of the twentieth century, somehow it turned out to be in B. Yeltsin's nomenklatura holder, the Internet is overflowing with all sorts of insinuations on this topic. Whatever it was, but in 1996, he was appointed general director of the Izhevsk engineering plant, which was then on the verge of collapse. But this was the oldest and best weapons company in our country.

It is believed that V. Grodetsky was saved by Izhmash from complete financial collapse and final bankruptcy. Alas, the radio engineer, probably, somehow managed to dispose of the assets of a huge weapon enterprise, but it seems that he didn’t understand the essence of his production, the essence of small arms, although he has been running the “weapon” for almost fifteen years. The head of Izhmash called the Stechkin pistol large-caliber. What does it mean? The caliber of the Makarov pistol, PM, - 9-mm is the same as that of the Stechkin automatic pistol, APS. And they are shooting with ammo only - 9х18. That is, their caliber is 9-mm, and the sleeve length is 18-mm. But no one would ever think of calling a low-powered PM a large-caliber pistol! All the strength of the APS in the length of the trunk - it is slightly more than the PM. Gunsmiths themselves considered the APS a transitional version of small arms — from pistol to submachine gun. The pistols of the Beretta company use 9x19 cartridges. The increase in the length of the liner by only one millimeter significantly increased the kinetic energy of the bullet, and, therefore, increased its amazing capabilities. But after all, the caliber of the Beretta is no larger than that of the Makarov and Stechkin.

Another moment. The general director of Izhmash, praising Italian pistols, as large-caliber and powerful, it turns out, does not know that in his own enterprise for several years already produce a very good Yarygin pistol in small batches. It is remarkable that it uses the cartridge 9х19 - the same as in the "Beretta". In fact, the gun Yarygin - analogue of the best models of the Italian company, he even looks like an Italian pistols. Although it is several times cheaper. But it is even stranger that Vladimir Grodetsky is convinced that there is no “replacement of a large-caliber Stechkin in our army”.

But in March, the 2003-th Serdyukov self-loading pistol - SPS was put into service, precisely as a full-fledged replacement for the Stechkin pistol. Unlike the APS, Serdyukov’s pistol cannot fire in bursts. But he has a very powerful pistol cartridge 9x21. The increase in the liner with a powder charge compared to the MTA and PM - three millimeters. And this is a huge additional power! A bullet fired from ATP flashes a bullet-proof vest of the highest degree of protection. No "Beretta" with a Serdyukov pistol, even a number can not be put. Italian samples lose in all characteristics. They win in one - in design, they are really very elegant. But the creation of designer Serdyukov, alas, is rude. But reliable and slaughter!

It is surprising that our Minister of Defense still does not know that by the last name he is the namesake of the best pistol in the world, and turns his eyes in search of the best weapon somewhere abroad.

The Union of Right Forces, also known as Gyurza and Vektor, is today one of the most favorite pistols among GRU, MIA and FSB professionals directly involved in anti-terrorist operations. And on the elegant "Beretta" it will never exchange there.

The general director of "Izhmash" mentioned the factory "Molot", which allegedly now produces "Stechkin", and will soon produce "Beretta". According to all official data, the release of Stechkin pistols on the Hammer was directively terminated on 1955, all technological documentation and technological equipment were destroyed! Who gave this, in the direct sense of the anti-state decision, is not known until now. So those MTAs that are still shooting were released at least 55 years ago. They were able to make high-quality weapons in Soviet times ...

Of course, it is possible, to put it mildly, unprofessional from the point of view of the gunsmith, the statements of the general director of "Izhmash" are attributed to a certain "polity". Perhaps he wants at any price to save the former once-unique city-forming plant in Vyatskiye Polyany - the very “Hammer”. But can a company that produced the widest range of small arms, the licensed release of a limited batch of Beretta pistols, be able to save? To answer this question, there is no need to guess the coffee grounds.

And then an interesting detail pops up. After all, it is not known who, like in the old cartoon, said “meow”, and to whom our gunsmiths top managers actively play along. Who exactly put forward the idea of ​​creating a joint venture between Izhmash and Beretta? There were statements that the initiative comes from the Italians. If this is true, then there is something to think about. Once they were active supporters of the joint development and production of Russian-Italian combat-training aircraft on the basis of our Yak-130. There were active negotiations, attempts were made to create a joint venture, the Russian people exulted. And what is the result? In Russia, recently crashed the second, still experienced Yak-130. And Italy has already concluded contracts for the sale of its combat training "M-346" - an exact copy of the unlucky Yak-130.

If our military officials simply thrive at the sight of Western weapons - beautiful in appearance and very easy to use - and are ready to buy anything there, then the pragmatic Westerners have their own calculations. They are even ready to buy “old stuff” from us - there’s no other thing in Russia, by definition, for a penny, in order to get rich in the world arms market. It is quite possible that Beretta really wants to create a joint venture with Izhmash, and even share its technology with us. But is it worth it to rejoice?

We can elementaryly use the technology of the last century for a considerable amount of money, but take away the ideas and the finished developments of the new millennium for free.

On the other hand, the situation at Izhmash is really critical. Process equipment worn out completely. The machine park has not been updated for several decades. And if nothing is done, then in a short time in Russia they really will not be able to produce high-quality small arms. But why is anyone sure that the Italians should save the country's oldest and largest arms factory? Do they need it? Hardly. First of all, it is necessary for us, the Russian people and all the citizens of Russia.

But it’s hardly possible to somehow influence the organization of the salvation process. Izhmash has its own owners - successful and very satisfied with life, the best top managers of Russia. And therefore our army is simply doomed to buy “large-caliber pistols” in Italy, and “light armor” in Germany.