November 27, 2014
40
Of the three hundred representatives of the Ukrainian battalion "Peacemaker" in the zone of the so-called "anti-terrorist operation" there are about fifty people left. The overwhelming majority of representatives of the Peacemaker left the area of ​​the punitive operation and either refused to return or wrote a report on the transfer to other units of the Ukrainian law enforcement agencies. Reports about it "Komsomolskaya Pravda in Ukraine". 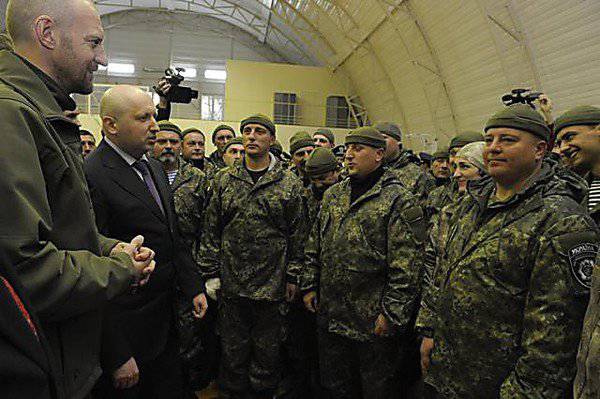 The main reason for the "self-disengagement" of the Peacemaker battalion is that its fighters "do not want to be cannon fodder." It was with these words that many of them came to the Kiev Central Board, under whose direction the Peacemaker operates. Several people representing the battalion reported that they were going to volunteer service on the terms that they would protect public order. Instead, the mobilized were transferred to the Donbass to participate in the "ATO". At the same time, the “peacekeepers” who left the scene of the fighting declare that the command did not give them any other weapons except for automatic, and had to move on the usual "Gazelle", which turned into accessible targets for the militia.

Representatives of the battalion said they would return to the Donbass only if they were fully re-equipped and equipped with military equipment. In this regard, the question arises: where does Avakov send those armored vehicles, which literally every day shows in the form of a photo on his Facebook page. Is he riding around Kiev? .. Or did the "peacekeepers" just find a reason to flee from the "ATO" zone?