From cold war to hot - one step

November 28, 2014
61
Washington is playing Russian roulette. Twists the drum, puts the barrel to the temple, pulls the trigger ... As long as Washington is lucky: it does not shoot himself, it is all a snap and a snap. Moscow warns: take out the cartridge, throw the revolver, do not play around - you will not finish the game. Not listening to Washington, the drum rotates again ... 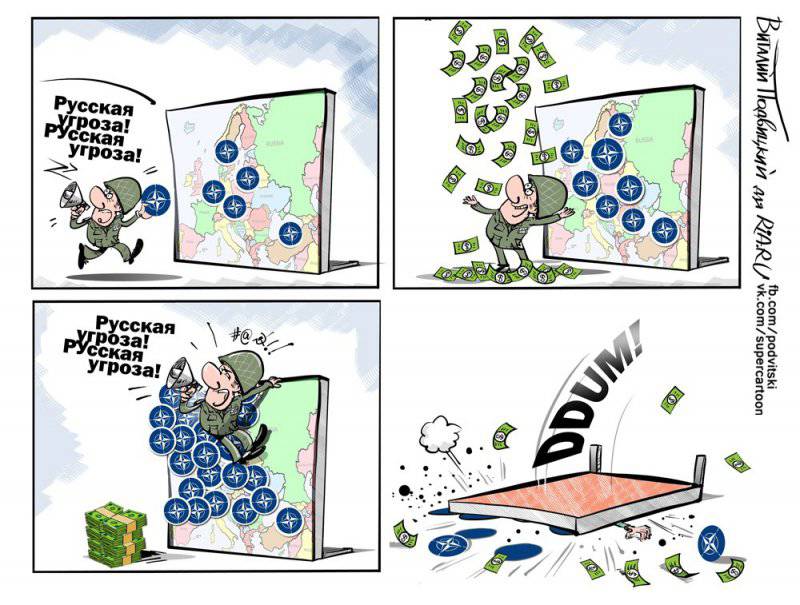 Pepe is sure: “dark times” have come. Recently, he "seriously" talked with some knowledgeable comrades who do not climb to the public and avoid newspaper hype, but they know more than other talkers.

All the "sources" of Pepe were "deeply concerned."

For example, one of the anonymous, living in New York and engaged in work in the field of strategic planning (without clarification), wrote to the publicist by e-mail, in which he explained that Western propaganda attacks on Putin and his comparisons with Hitler had already reached the scale that the Russians, who "don’t believe in their ears," now "will not trust the United States under any circumstances."

The same person told Escobar that he himself could not believe that the United States had climbed into Ukraine in order to protect the gangs there - the very ones that Putin could save Ukraine from. Just think: Washington "had the audacity to bring one of the worst local thieves to power!"

Still it was, it went into history. And now the anonymous author has no doubt that the guarantee of mutual nuclear destruction from now on has ceased to serve as a deterrent.

Escobar notes that such statements might seem “extreme”, but this will be a “logical continuation” of what the United States is doing now, forcing Russia to participate in the new cold war.

So the former Soviet president and Secretary General Mikhail Gorbachev said that the new cold war had already started. A specialist in Russia, Stephen Cohen, argues that the Cold War never really stopped. "The Roving Eye" wrote about the Cold War two months ago. From Britain, we hear voices giving unflattering characteristics to “little Putin”: he is both “ruthless” and “reckless”, and it was he who “brought the cold war back into fashion”. And in the USA they grieve over the collapse of that world, which was formed after the first cold war, and dream of a revival of the “old kind exclusivity”.

Putin recently gave an interview to the German channel ARD. He recalled, using only the facts that NATO and the US had scattered their military bases around the world. These bases are also available in areas close to the borders of Russia. Moreover, their number is growing. This year a decision was made to deploy special forces, and again in close proximity to Russian borders, Putin specified.

The insultants of Russia should remember, Escobar writes that the admission of Georgia and Ukraine to NATO, which was discussed at the alliance’s summit in Bucharest in April 2008, received an answer in the form of a short and spectacular war, as a result of which the inclusion of Georgia into NATO was a big question.

NATO members still work with Ukraine. However, in an interview with Putin, it was not for nothing that he told the "ignorant" American "puppet from the EU" that Moscow could drop the Ukrainian "house of cards" instantly. For this, Moscow will simply declare that the time has come to pay its debts and will point to legally binding clauses of contracts.

In addition, V. Putin made it clear that Moscow will not allow the destruction of the Donbass and ethnic cleansing there.

“Today there are battles in eastern Ukraine,” Putin’s journalist quoted as saying. - The Ukrainian central authorities have sent the armed forces there, and they even use ballistic missiles there. Does anyone talk about this? Not a word. And what does it mean? What does this tell us? This indicates the fact that you want the Ukrainian central authorities to destroy everyone there, all their political opponents and opponents. Do you want that? Of course, we are not doing this. And we won't let that happen. ”

Escobar cites data from Kiev about the devastation in the Donbas. At least 65% of residential buildings and 10% of schools and kindergartens there are destroyed. The activities of more than 40 thousand companies paralyzed. Unemployment in Ukraine exceeded 40%. The country's external debt can reach a huge amount in 80 billion dollars. "And do not expect that the International Monetary Fund, which currently owns Ukraine, will begin to engage in charity."

Kiev will not be able to pay its billionth gas bills to Gazprom. Kiev's money goes to the terror unleashed by the central authorities in the eastern regions. Poroshenko himself talks about it, and he is supported by the US and the EU, thereby becoming complicit in the crime.

So, the journalist concludes, the North Atlantic Alliance has been warned by Russia about the “red line”. But the elites on Wall Street are unhappy. Cold war is not enough for them, hot is more suitable for them.

The stability of Europe? The Obama administration spit on it. The main American goal now is to undermine the Russian economy. And in the long run, the United States set its sights on “regime change” in Russia.

Washington does not care about the economic weakening of the EU. The only thing that matters to the United States is NATO. And the overwhelming majority of members of the alliance thinks in a single spirit: Putin should be “cured” in the same way as Milosevic, Hussein, or Gaddafi. There is no indication that the Obama team is ready to back down.

When Hillary Clinton will sit on the American throne (originally Hillarator, derived from the “terminator”), hell will begin, Pepe Escobar notes.

It’s possible that we’ll add from our own words that it will be “Hillator” that will become the next US president. The other day, Obama had just said that Hillary would have made a great president.

Giving an interview to the TV channel ABC. Barak Hussein сказалthat often communicates with Hillary Clinton and considers her to be his friend.

The American president noted that among the candidates from the Democratic Party there are worthy candidates, but of all the names Obama chose to voice the only thing - Hillary Clinton. According to him, she could become a strong and excellent president.

Recall, as Secretary of State, Hillary loved to repeat: "Assad must leave." Is it with this slogan she will go to elections-2016? Or is there a slogan more abruptly? Maybe she will raise the bar and say: "Putin must go"?