November 27 2014
22
In Russia, the complex tests of the Angara-A5 heavy launch vehicle launch complex have been completed. The rocket has already been removed from the launch pad at the Plesetsk cosmodrome. On this 26 November reports TASS with reference to the official representative of the troops of the East Kazakhstan region Alexei Zolotukhin. According to him, the specialists at the Plesetsk cosmodrome carried out a whole cycle of electrical tests of the booster systems and launch vehicle systems and launch equipment, they also tested the Angara launch vehicle refueling system with fuel components and checked the launch vehicle readiness for the first launch of this class of rocket.


At the moment, the Angara-A5 rocket has been removed from the launch pad of the universal launch complex of the site №35. She was taken to the assembly and test building of a special technical complex. After the completion of this procedure, the cosmodrome workers began a cycle of technological operations to prepare the rocket for the start of flight tests. The first launch of the Angara-A5 heavy class rocket is scheduled for December 25 2014 of the year (estimated launch date). Earlier, on July 9, after several transfers of launch from the Plesetsk cosmodrome, the Angara-2014PP light launch vehicle (first launch) was successfully launched.

Currently, the creation of the Angara rocket complex is one of the priority areas for the development of the Russian Plesetsk cosmodrome. It is believed that this particular complex should become part of the national system of launch vehicles, which will be based solely on the Russian scientific and industrial potential. Work on the creation of ground infrastructure facilities for the preparation and launch of Angara launch vehicles is carried out within the framework of the Federal Target Program “Development of Russian cosmodromes for 2006-2015 years”. 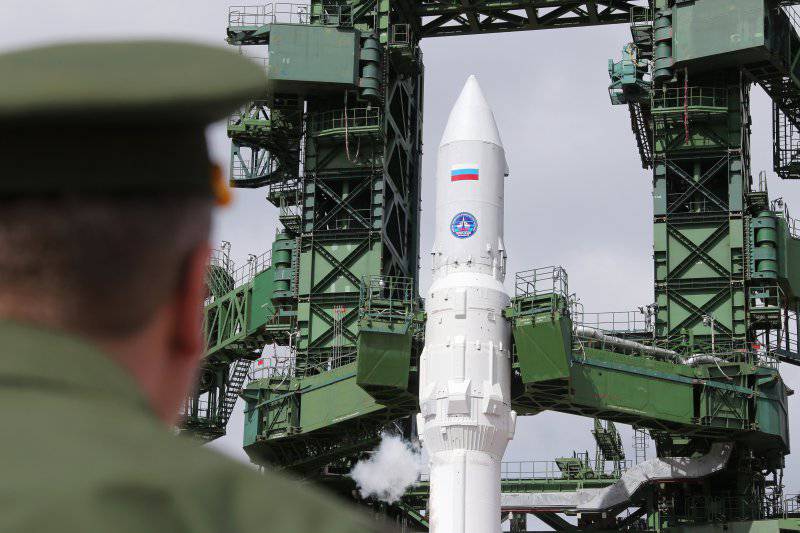 The Angara complex is created on the basis of a unified series of launch vehicles of the light, medium and heavy classes. These missiles will be able to put into space almost the entire range of prospective payloads in the interests of the Russian Defense Ministry in the entire required range of heights and oblique orbits. It is also important that toxic and aggressive fuels will not be used in the Angara family of missiles. According to experts, such a decision will significantly improve the environmental safety performance of the entire complex, both in the region that is directly adjacent to the launch site, and in those areas in which the detachable parts of launch vehicles will fall.

The main enterprise-developer and manufacturer of the Angara space rocket complex (AAC) is the federal state unitary enterprise Khrunichev State Research and Production Space Center. State customers are the Federal Space Agency and the Ministry of Defense of the Russian Federation. The creation of the Angara CEC is a task of special state importance. Putting this rocket complex into operation will allow the Russian Federation to launch into space any devices of all types from its territory, ensuring for the country guaranteed and independent access to outer space.

The Angara cruise ship is a truly new generation of Russian launch vehicles that is built in a modular fashion. These rockets are based on two universal rocket modules (URM) equipped with oxygen-kerosene engines: URM-1 and URM-2. At the same time, the Angara family of missiles includes carriers from light to heavy classes, with payloads ranging from 3,8 to 35 tons (PH Angara-A7) in low earth orbit. 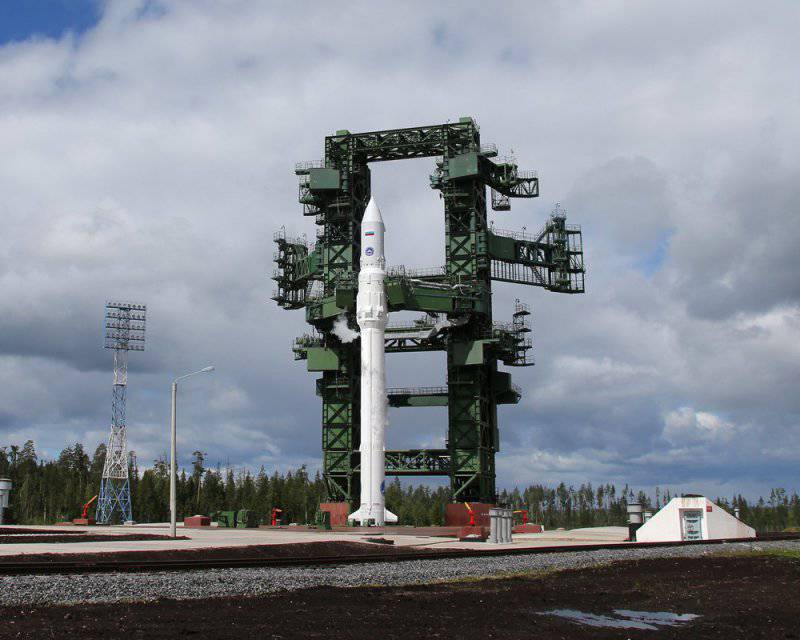 URM, working on the components of oxygen + kerosene, is an already finished design, which consists of fuel tanks and oxidizer, which are interconnected by a spacer, as well as the engine compartment. Each ECD-1 is equipped with one sufficiently powerful liquid jet engine (LRE) RD-191. This engine was created on the basis of a four-chamber engine that was used on the Energia launch vehicle and is used on Zenit launch vehicles (RD-170 and RD-171 engines). URM-2 is equipped with another main engine - РД-0124А. This is the first LRE, which appeared in our country in the post-Soviet period. It is the most highly efficient oxygen-kerosene rocket engine in the world.

In the composition of the launch vehicles of the light class "Angara-1.2" is used one URM. At the same time, the ultimate in the number of modules used is the Angara-A7 heavy booster rocket, which consists of the 7 URM. The prototype of the first stage "Angara" (URM-1) three times in 2009, 2010 and 2013 years passed flight tests as part of the launch vehicle KSLV-1 made in South Korea. The upper stage on the Angara-1.2 launch vehicle can be used in the Briz-KM upper stage, which passed flight tests as part of the Russian Rokot conversion rocket, and on the Angara-А5 carrier rocket, the upper stages are used. Briz-M "and KVTK.

Unique technical solutions and widespread use of unification allow launching of all launch vehicles of the Angara family from one launcher. In accordance with the decision of the state commission, the launch vehicle of the light launch Angar-1.2 of the first launch with a non-separable payload model successfully launched the 9 on July 2014 from the Angara launch center, located in the Arkhangelsk region on the Plesetsk cosmodrome. The first test launch of the missile was carried out by the combat crews of the Aerospace Defense Forces (ASD), as well as industrial enterprises. 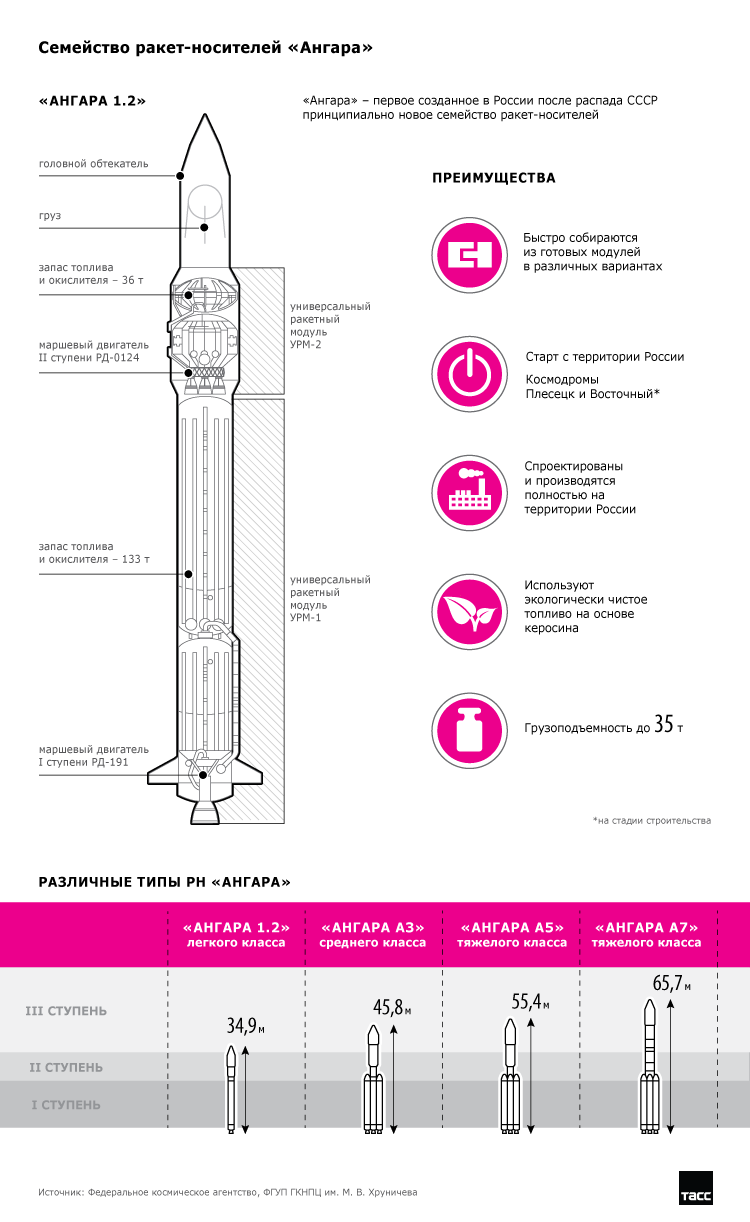 All prelaunch operations, the launch itself and the subsequent flight of the Angara-1.2PP rocket proceeded normally. At the same time, the Angara-1.2PP booster rocket consisted of two stages, which were created on the basis of universal rocket modules (URM-1 and URM-2), as well as a mock payload of 1,43 tons and a head fairing. Only environmentally friendly components of the fuel — kerosene and oxygen — are used in propulsion systems, the launch vehicle launch mass is approximately 171 ton.

To organize the launch of Angara missiles from the Plesetsk cosmodrome, a special complex was built. It includes a launching table (PS - 1 pcs.) - weight 1185 tons, cable refueling tower (KZB - 1 pcs.) - weight 1700 tons, a universal stand designed for assembling a space head with the Briz-M upper stage ( 1 units.) - weight over 40 tons, as well as transport and installation units for light and heavy PH (197 and 400 tons, respectively).

Tactical and technical characteristics of the Angara launch vehicle family (for launching from the Plesetsk cosmodrome):

Removal of the Angara-A5 launch vehicle to the launch site of the Plesetsk cosmodrome: 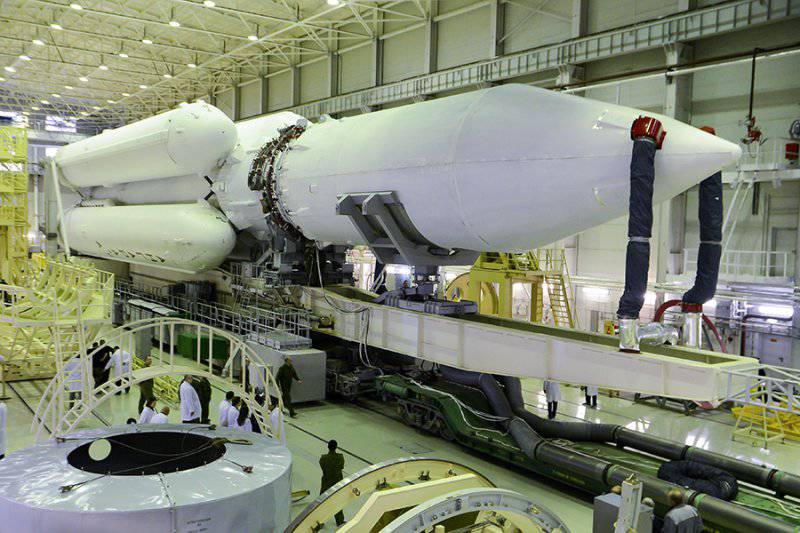 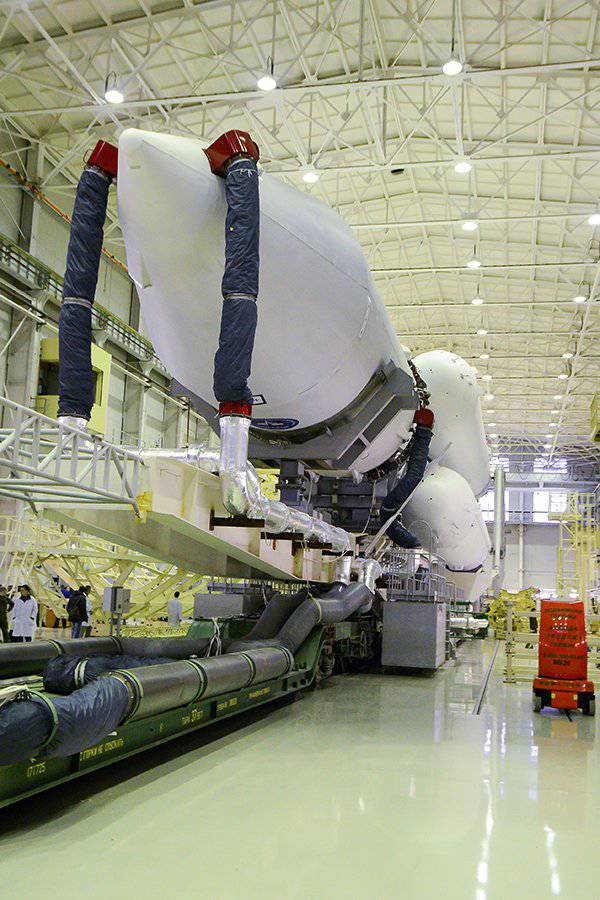 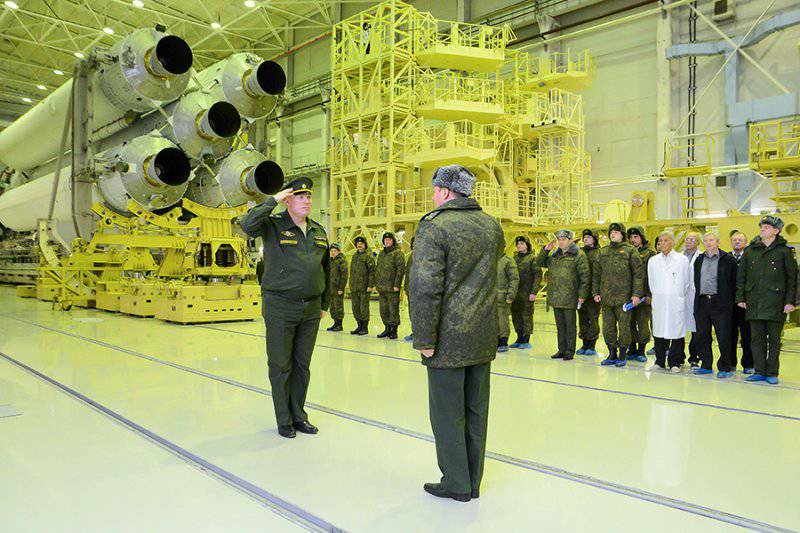 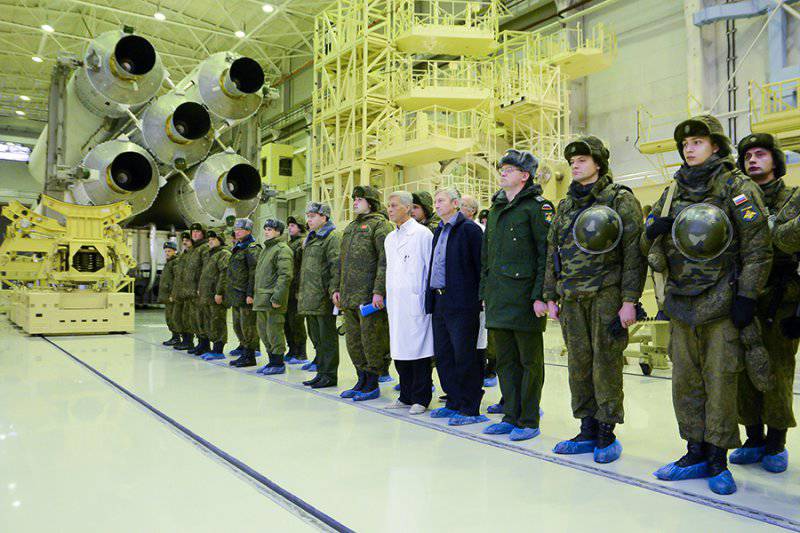 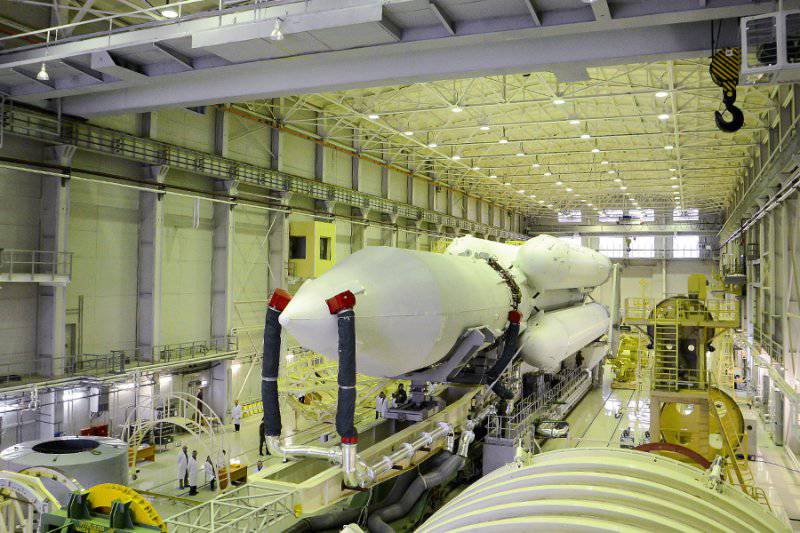 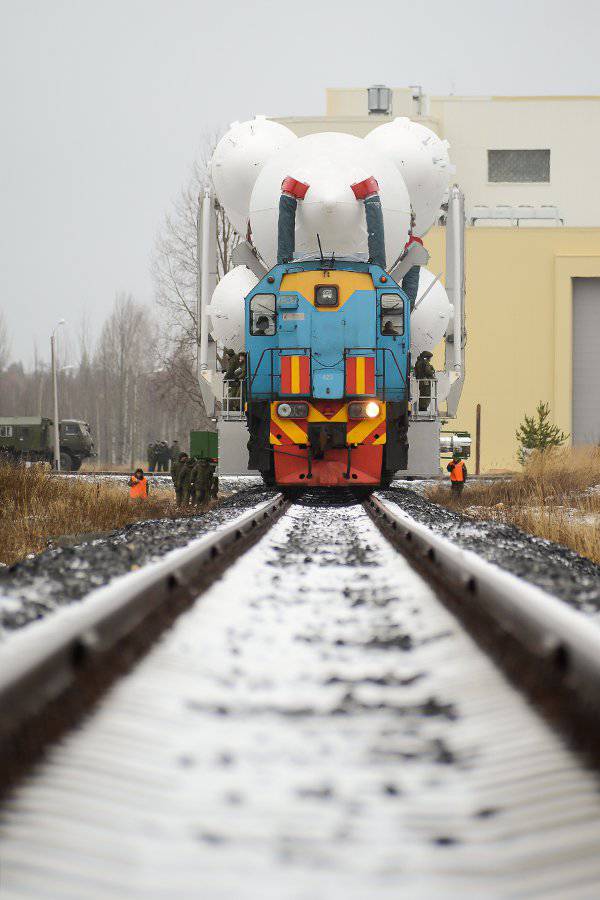 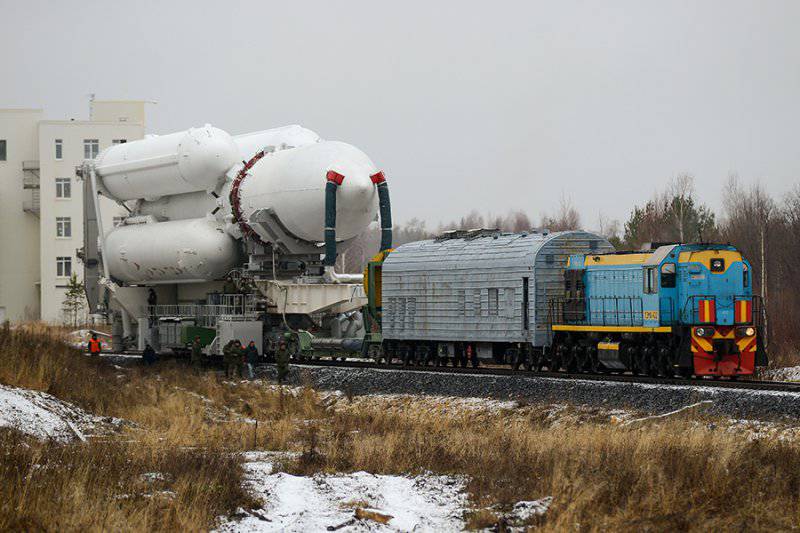 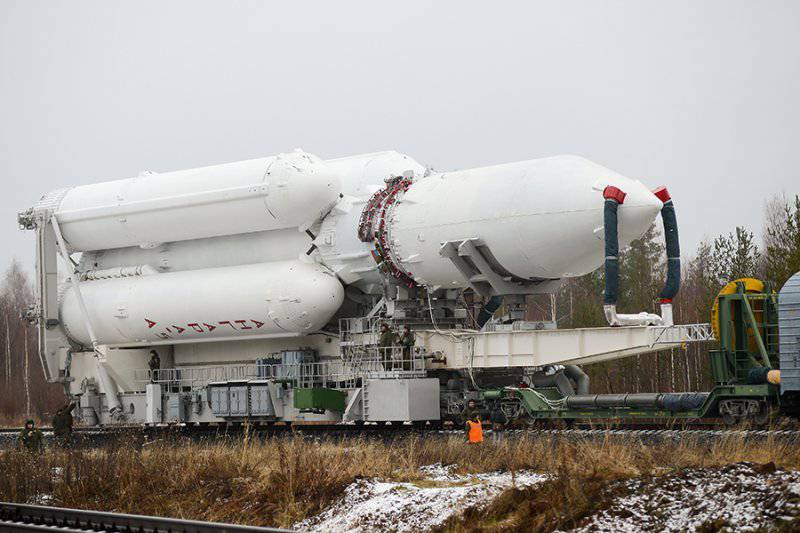 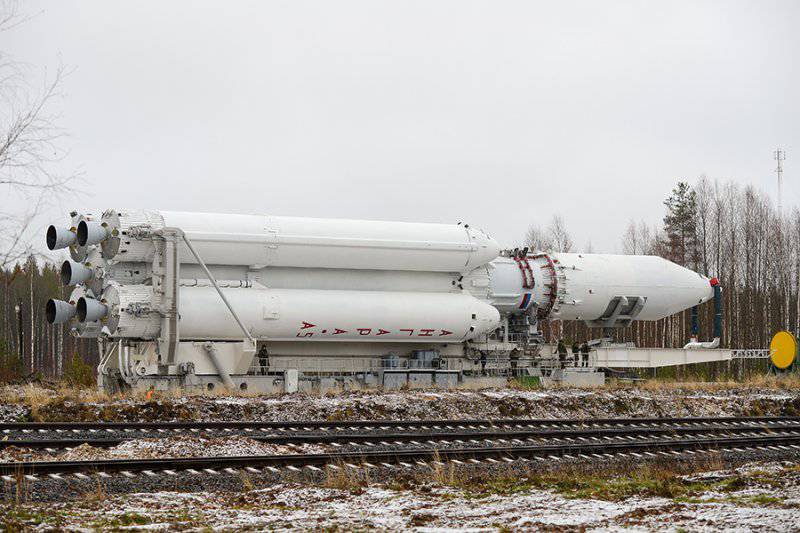 Photo: Andrey Morgunov / Ministry of Defense of the Russian Federation