Russia and Serbia will stand together against the threat of drugs 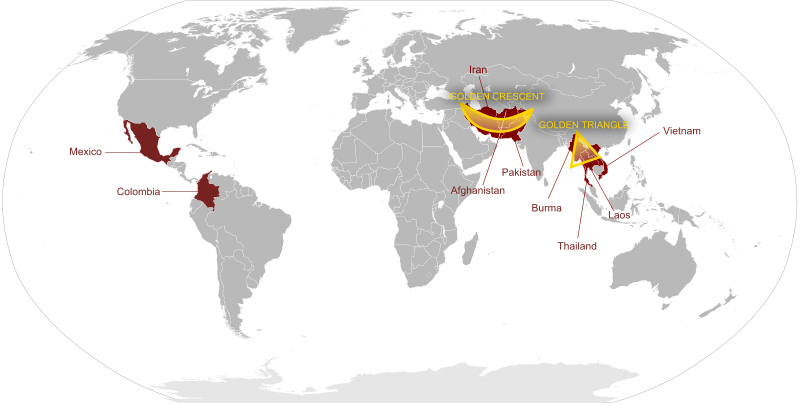 The head of the Federal Drug Control Service (FDCS) of the Russian Federation, Viktor Ivanov, suggested that Serbia, Montenegro, Albania and Macedonia, together with Russia, create an organization that can stop the onset of the Kosovo drug mafia.


And on Monday, the Russian Federation and Serbia signed an agreement on cooperation in combating illicit trafficking in narcotic drugs, psychotropic substances and their precursors (substances used in their manufacture), at this meeting the Russian side was represented by Viktor Ivanov, head of the Federal Drug Control Service, and the Serbian side Head of the Ministry of the Interior of Serbia Ivica Dacic.

According to the subsequent, after the press conference, Viktor Ivanov, the agreement signed between the states "is a serious step towards stopping the Balkan drug route." According to the head of the Federal Drug Control Service, about three decades ago, narcotic traffic proceeded through the Balkan Peninsula to Europe mainly from the so-called “golden triangle” (this is a geographical area located in the mountains at the junction of the borders of three countries of South-East Asia: Thailand, Myanmar and Laos, they were known for large volumes of production and distribution of drugs), but since the beginning of the 2000-ies, after the invasion of US and NATO troops in Afghanistan, the Afghan state became the main producer and supplier of heroin to Europe. Afghanistan currently produces roughly 90% heroin, which is sold in countries around the world. Every year, 150 tons of heroin are shipped to European countries, of which approximately 35 – 40 tons are delivered to the Russian Federation.

The head of the Federal Drug Control Service said: "Even having established cooperation with Serbia, we cannot solve this problem ourselves." To solve this truly global problem, “full-scale regional cooperation is necessary, since the source of the threat of drugs is located in one geographical point”. The director of the Federal Drug Control Service, Viktor Ivanov, noted that globalization of criminal groups working in the drug business is currently occurring, and heads of criminal clans are assigned various roles to various regions of the planet. So, according to V. Ivanov, “Afghanistan has become an emitter of drugs, the Balkans is an interface, and Kosovo is a logistic center that provides pre-sale preparation of drugs.”

Therefore, Russia has signed an agreement with Serbia on the exchange of operational information on drug routes, couriers and dealers. In addition, this agreement “will allow an investigation to be launched in one country at the request of another,” the director of the Federal Drug Control Service said. Ivanov also did not rule out that in order to increase the level of Serbian-Russian cooperation, the countries would be able to exchange their representatives, and they would coordinate the fight against the drug mafia.

In addition, if Macedonia, Montenegro and Albania had joined Russia and Serbia: “The Balkan anti-drug five or the Balkan anti-drug quintet” would be an even more effective tool in countering the spread of drugs in Europe. Five countries could become “an instrument of systematic and targeted cooperation on the elimination of the Kosovo drug phenomenon”. The leader of such a union, a kind of anti-drug front could be Serbia.

23 August Victor Ivanov delivered a report in the capital of Serbia - Belgrade, where he reported that two major world narcotic streams - Latin American (cocaine) and Afghan (heroin) are connected to Kosovo. And from there spread throughout Europe. Kosovo is now in fact a criminal enclave that lives mainly due to criminal activity, which includes not only the drug business, but also human trafficking weapons, stolen machines. The Albanian mafia operates not only in Albania and Kosovo, its sphere of activity is already almost the whole of Europe. According to EU law enforcement agencies, Albanian mafia groups "control up to 70% of the heroin market in Switzerland, Austria, Germany and Hungary and up to 20% of traffic to the UK", as well as to other states, Ivanov said. The amount of profits only from the sale of drugs is higher than the entire budget of the region: “The size of the annual profit from heroin transit reaches? 3 billion”, and this amount is twice the budget of Kosovo.

Currently, a new “golden triangle” is being created, already in Europe - Albania, Kosovo and Macedonia. They became a transshipment hub connecting Europe with global opiate manufacturers. Through them, from West Africa and beyond Latin America, there is a multi-billion dollar flow (at a cost) of cocaine. Cocaine and cocaine drugs are brought from Colombia, Peru, Bolivia to West Africa, and from there to the Balkan Peninsula. Then it is distributed throughout Europe, and again through the Albanian criminal structures. According to the UN, the amount of drugs that are stored in the warehouses of Kosovo, Western Macedonia, Albania, is already calculated in tons.

According to a number of analysts, a large role in the global drug business is played by American structures, including the special services. It is not by chance that there are the largest US military bases in Europe in Kosovo, and through them there is a cargo turnover with Afghanistan. Thus, the Serbian military-political expert Milovan Dretsun said that the Albanian criminal structures leading the drug trade in Kosovo are strongly connected with the leadership of the republic (they are in the share) and act with the tacit consent of the Americans. Milovan Dretsun collected documents on the topic of cooperation between NATO and the Kosovo Liberation Army and wrote a book about it. There are materials there on their joint criminal schemes: “There is verified information that American officers control the flow of Afghan drugs through Turkey and Macedonia to Kosovo to the NATO base“ Bondsteel ”and further ensure their distribution in Europe,” he said. In addition, according to Canadian detective Stuart Kelok, US diplomats prevented the arrest of well-known drug dealers in Kosovo. “Kelok also indirectly confirmed that the largest Albanian mafia clan is headed by Hashim Tachi, the current Prime Minister of Kosovo,” continues Milovan Dretsun. According to KFOR leaks, this Hashim Thaci clan owns three clandestine heroin processing laboratories. And the people who are involved in drug smuggling into Kosovo and spreading them throughout Europe currently occupy the most important official posts in this province. This is understandable, without the patronage of the official Kosovo authorities and the United States, such frauds cannot be done. It fits the drug business and the US strategy of "lowering" the EU.

And this is not to mention the scandals about the dismemberment of the captured Serbs into organs - the underground transplant business. Ideally, the Serbs should be allowed to cut, burn with the hot iron this “cancer tumor”, returning Kosovo to normal life within Serbia. But given the domination of the Western world in the "world community", this is currently impossible. Therefore, Russia and the EU countries will reap the “fruits” of their weak-willed policies that follow the “American aircraft carrier”.

We are in Yandex Zen
Montenegro took to the streets. The population against the country's entry into NATO
Spetsnaz FSKN "Thunder"
5 comments
Information
Dear reader, to leave comments on the publication, you must to register.