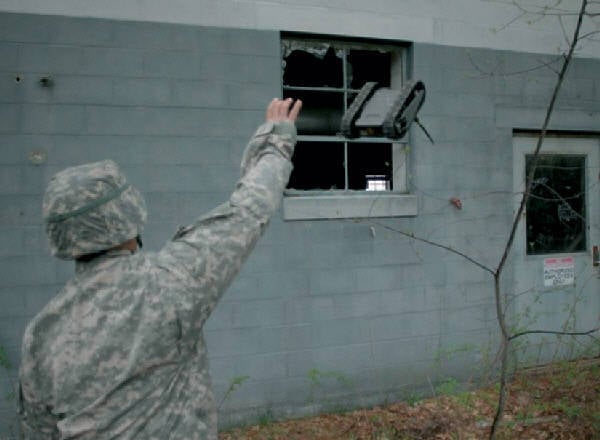 It turns out that robotic grenades, which throw the enemy, may well be used as a video surveillance system, as well as for disrupting remote targets.

Such mini-robots were demonstrated at the international conference of the association of developers of robotic systems in the United States. These are the so-called “smart grenades”, throwing themselves at enemy positions. Such devices can be used not only for military purposes. They are ideal for use in hard-to-reach places of relief or in high-risk areas for the purpose of video surveillance.

These robotic mini-kamikaze are made by the South Korean company Hanwha. The weight of each model is about 700 g. The robot moves on the ground on tracks made of durable rubber. Inside it, the device carries explosives, a video camera and a radio signal transmitter. "Smart grenade" is the manufacturers in a protective casing, with which the system is fired. It was assumed that delivering such grenades to the target would be a specially designed crossbow, the dimensions of which were quite large. After a crash in an agreed place, a smart grenade can be controlled by the operator and delivered directly to the target. She can even climb stairs.

Mr. Pak, head of research at the Hanwha Corporation, said that "smart grenades" are already in service with the South Korean army.

Of course, the very principle of a robotic grenade appeared earlier. The American design, made in the state of Minnesota, which the authors called the “Recon Scout Throwbot” was made in a roughly similar fashion. This robot-baby, without charge, was cast into the required square and transmitted the data to a person controlling it using a radio transmitter and a high-definition camera. This robot weighs less than the Korean counterpart - just 500. Today, it "serves in the army and fire departments of the United States. Alan Bignoll, the head of the company that produces the American robot, claims that their apparatus already helps more than two hundred organizations and departments.
Ctrl Enter

We are in Yandex Zen
Ground robots. From drop systems to unmanned convoys (Part of 2)
I fight for the electric body! Ground mobile robots on today's and tomorrow's battlefield. US Technology Overview
6 comments
Information
Dear reader, to leave comments on the publication, you must to register.