The Treaty of Abkhazia and Russia did not like NATO 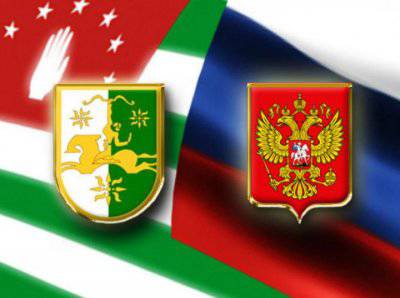 24 November, the presidents of the Russian Federation and Abkhazia signed an agreement on strategic partnership. Something in this treaty is extremely disliked by the Western powers. First of all, the "hegemons" were alerted when they learned that the document included a clause on military alliance. The NATO bloc also became alarmed: the local secretary general, having learned that Russia and Abkhazia could now together reflect external aggression, declared that the alliance did not recognize the treaty. Not recognized him, of course, and the United States. Needless to say that the agreement outraged Georgia?

The signed document is primarily strategic. The agreement refers to a military alliance: the parties pledged to assist each other in the event of external aggression. The theory will be supported by practice: Russia and Abkhazia will create a unified military grouping. According to the agreement, it will be formed no later than one year from the day the document enters into force.

Also, the Treaty of Alliance and Strategic Partnership includes clauses on investment and social projects.

As transmits RIA News", the estimated amount of funding for the program of socio-economic development of Abkhazia for 2015-2017 years may be more than 4 billion rubles annually. This was stated by Vladimir Putin.

“Russia will continue to help the republic in solving social problems and strengthening the real sector of the economy,” the president said.

According to "Russian newspaper"The document reflects the high level of interstate relations. This is particularly emphasized Vladimir Putin.

"This is a new step in the implementation of the agreements that were reached earlier, the improvement and strengthening of the legal framework formed in previous years," he said.

Next year, Abkhazia will receive 5 billion rubles for the purpose of implementing the treaty, Putin said, and cited some economic data: “Over the years since the independence of the republic has been recognized, a lot of joint work has been carried out to establish cooperative ties.”

Today, Russia ranks first among the partners of Abkhazia. More than 50 enterprises with the participation of Russian capital are represented in the areas of fuel and energy complex, communications, mass communications, banking services, tourism.

As part of the investment program to promote the socio-economic development of Abkhazia for 2013-2015 years, as the president said, it is planned to complete the construction of fifty-four objects.

The draft program for 2015-2017 has, according to the President of the Russian Federation, an estimated amount of funding in the amount of "more than 4 billion rubles annually." Vladimir Putin explained that funding will be doubled. That is, next year, if we make a comparison with the current year, the financing of Abkhazia will almost double, to 9,2-9,3 billion rubles.

“Important historical an event in the relations between states and peoples ”, writes further“ RG ”, called the signing of the agreement Raul Khadjimba. “We are a small country, but over the years we have consistently focused on Russia, and this sequence has received support from the Russian Federation,” said the Abkhaz president. He expressed sincere gratitude to his Russian colleague "for everything that you have done to support our people."

It cannot be said that this assessment is shared by everyone in Sukhum. At the same time, two meetings were held in the Abkhaz capital.

This was told by Gulya Arifmezova and Dmitry Alexandrov ("Sight") in a report from Tbilisi.

As the correspondents report, both supporters and opponents of the new agreement came out in Sukhum.

At the first rally, people welcomed the policy of Khajimba and the new treaty with Russia. But the participants of another rally, organized by the Amtsakhara party, expressed their distrust of Khajimba, because, in their opinion, the treaty "infringes upon the sovereignty of Abkhazia."

The number of protesters is about a thousand people. At the same time, there were more supporters of the agreement - about two thousand.

Also, the publication reports on the promotion. located on the border of Russia with Abkhazia. Representatives of the organization "Women in Politics" came here. They had posters with slogans in their hands: “Do not drive a wedge between Russia and Abkhazia!”, “We are with Russia, not in Russia,” “The people will not allow them to risk their independence!”

The newspaper cites the opinion of a leading Abkhaz public figure and blogger Roin Agrba. He believes that holding two rallies shows that Mr. Khajimba is fulfilling election promises about the openness of government and public dialogue. But the arguments of the opponents of the treaty are unfounded, Agrba said. “Let me remind you that the discussion and amendment lasted for more than two months. A new text was created on the basis of all wishes, ”the newspaper’s source said. He also explained the behavior of the opposition: “The current opposition is still looking for its niche and is in fact only being structured, seeking self-expression. They use this public outlet to declare themselves to some extent. ” Moreover, in the composition of this new opposition is practically the composition of the government that signed the previous similar 2009 agreement of the year, Agrba noted.

Nor was the reaction of the West, known for its selective approaches to resolving international issues, late.

The reaction of the NATO bloc was very quick. A message in four languages ​​- English, French, Russian and Ukrainian - appeared on alliance website 24 November.

Secretary General Jens Stoltenberg said that NATO supports the sovereignty and territorial integrity of Georgia, and therefore does not recognize the "so-called agreement on alliance and strategic partnership, signed between the Georgian region of Abkhazia and Russia on November 24."

We continue to urge Russia to de-recognize the regions of Georgia - South Ossetia and Abkhazia - as independent states and withdraw their troops from Georgia. ”

Following NATO, a separate statement was received from Estonia. His newspaper leads "Postimees".

Speaking at a meeting with Swedish Foreign Minister Margot Wallström in Stockholm, Estonian Foreign Minister Kate Pentus-Rosimannus stated that the treaty between Russia and Abkhazia indicated Russia's desire to annex part of Georgia.

“There is a danger that this may lead to the annexation by Russia of a part of Georgia. This step violates the sovereignty of Georgia, contrary to the norms of international law and obligations that Russia assumed before the Council of Europe, and the so-called sixth paragraph of the peace plan, ”said Pentus-Rosimannus and added that the treaty destabilizes the situation in the entire region.

By the way, the Baltic republics are becoming more militant. It even creates the impression (false) that they are ready to fight with Russia.

The other day, Newsweek magazine issued an article under the title: “Tiny Baltic countries are preparing to repulse powerful Russia” (the source of the short translation is "Inopressa"). Journalist Elizabeth Bro reminded readers that at the beginning of this month the Russian warship entered the exclusive economic zone of Latvia. In general, in 2014, Russian warships approached fifty times the waters of Latvia. What to say about the aircraft, too, of course, the military: they approached the air borders of Latvia about 200 times.

And once such a thing, Latvian Defense Minister Raymond Veyonis said in an interview that the country is ready to fight back: “We have special plans of action. Together with the Ministry of the Interior, we conduct exercises, training our troops and the police in case of different scenarios. But, of course, we need to cooperate more with our neighbors, as well as with our NATO allies. ”

Unpleasant testimony addressed to Russia came from Lithuania. Her presidency, Dalia Grybauskaite, called Russia a "terrorist state." Moreover, she said that the Russians threaten both Ukraine and the whole of Europe.

“Ukraine today is fighting for peace in all of Europe, for all of us. If a terrorist state that is carrying out aggression against its neighbor is not stopped, then aggression can spread throughout Europe and beyond, ”the president quotes "Delfi" with reference to the radio station "LRT".

Finally, spoke and Washington. No, it was not Obama who spoke out (he was distracted by the “Maidan” in the 38 states, which was recently launched in Ferguson). Jeff Ratke, the State Department press service, spoke briefly on the topic of Abkhazia with the media.

“The position of the United States with respect to Abkhazia and South Ossetia remains unambiguous: these regions are integral parts of Georgia, and we intend to continue to support Georgia’s independence, sovereignty and territorial integrity,” he said. "Voice of America".

The State Department document also notes that the United States does not recognize any “contracts” between the Georgian region of Abkhazia and the Russian Federation.

Jeff Ratke’s statement states: “We again urge Russia to fulfill all the obligations stipulated in the cease-fire agreement concluded in 2008, return troops to the positions they occupied before the conflict began, renounce the recognition of the Georgian regions of Abkhazia and South Ossetia as independent states and ensure unimpeded access to these regions for the provision of humanitarian assistance. ”

However, let us add on our own, the position of the United States, as well as of the entire West (ending with the Baltic republics), is clear. The quick response of the NATO Secretary General is also understandable.

Georgia is a candidate member of the alliance. She has been trying to join him for almost 10 years (February 14, 2005, NATO and Georgia signed the Partnership for Peace agreement). But then there was a 2008 year, a short war, as a result of which Georgia ingloriously retreated and received the so-called "territorial problems", during which the road to the alliance was ordered to it. Since 2009, NATO has been putting pressure on Russia for the recognition of Georgia’s territorial integrity within its “internationally recognized” borders. Simply put, we are talking about Russia withdrawing from the recognition and support of both Abkhazia and South Ossetia.

However, as the contract from November 24 of 2014 showed, Russia did exactly the opposite. How else? Moscow is well aware that, following Georgia, Ukraine will reach NATO (and is already stretching). Therefore, concessions, of course, will not. As a result, Georgia remains outside NATO; Ukraine will also be outside the bloc - it also has “territorial problems”.

And in general, isn't it time for the "defensive alliance" (the words of the US ambassador to the Russian Federation John Tefft) to take up defense somewhere in Ferguson? It is desirable on the side of the rebels: after all, they are defending ...