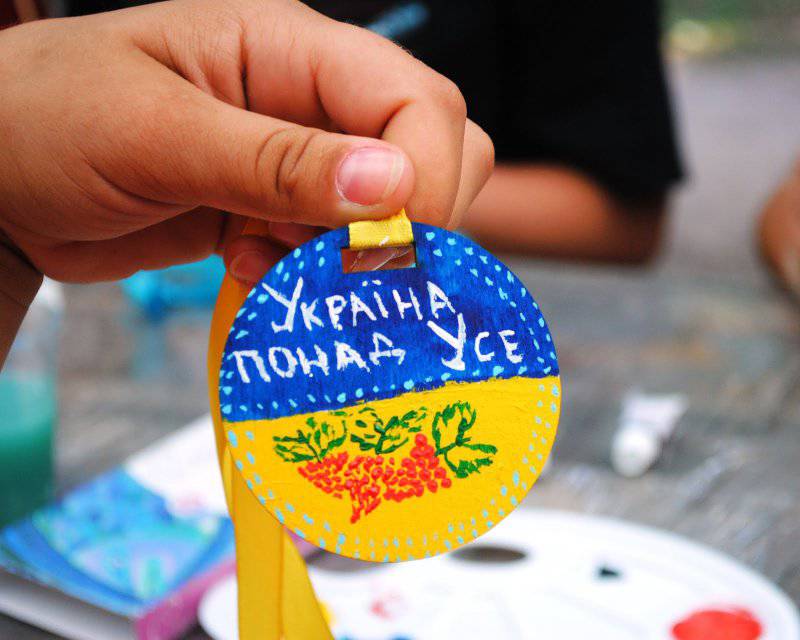 In modern Nazi Ukraine, the problem of losing landmarks is increasingly evident.

A year ago, everything was simple. "We want to be in the EU," wrote the Maydanovtsy (and one girl clarified why. She wants to go in lace panties. Each has their own dream. Let that be so). It then worked. Today, as inspired by Maidan Mustafa Nayem writes:

Unfortunately, the success of Ukrainians in the struggle has been achieved not so much with the help of the EU, but at the expense of the lives of people who are now dying in eastern Ukraine. And in that sense, I'm really disappointed. ”

Neither take nor add. The revolutionaries threw the Donbass into corpses (with their own and those of others) in order to tear Ukraine away from the Russian world and bring it to a European bay, but it turned out that they are not expected there.

We went to the EU, and got to Somalia. Apparently dear wrong.

At the end of February, after the Nazi government of Ukraine set a course for war and events in the Crimea broke out and a new slogan appeared in the South-East. "We want NATO. NATO will protect us."

NATO says a lot and encourages Ukraine to fight (preferably not with the Donbas, but with Russia), but really does not give anything for this. And it is no longer just annoying, it literally infuriates ordinary "Svidomo" citizens. Although if the citizens had skipped less and taught the chants, but had simply taken an interest in the essence of the question, they would have learned that:

The minimum program is the Individual Ukraine-NATO Partnership Plan. It must be said that the format is absolutely not new, because the Individual Plan for Ukraine operated from 2002 to 2010 for a year, while in 2010, Viktor Yanukovych, by his decree, did not eliminate the Interdepartmental Commission on Ukraine's preparation for NATO membership. An individual plan is the work of the NATO Information Center in Ukraine, joint military exercises, and the exchange of experience.

The maximum program is Ukraine’s accession to the NATO Membership Action Plan. The MAP as a procedure for joining NATO has been operating since the summit in Washington in April 1999. First, the candidate sends an application to join the MAP. Then NATO Headquarters develops an individual Membership Action Plan.

In the end, after the implementation of the MAP, the NATO leadership will give its assessment. A positive assessment gives the candidate the right to begin formal negotiations on joining the Alliance. But at the same time, the fulfillment of the MAP is still not considered by the NATO leadership as a guarantee for joining the North Atlantic alliance. For example, Macedonia participates in the MAP since the 1999 of the year, but has not yet been accepted into the Alliance.

The last such date in terms of joining the MAP was the NATO summit in Wales in early September 2014. President Petro Poroshenko even attended the summit, listened to many words about support, but did not achieve any concrete progress.

That is, in September 2014, NATO shrugged and said Poroshenko: “And who are you? And what do you want from us? We are not inviting you?” This is not even a slap in the face, it is a blow on the head with an ax across the entire post-coup ideology and Maidan’s hopes. They threw himself on himself with his problems. And what was the point of including a clause on joining NATO in a coalition agreement? I think, and NATO, too. Although Ukraine may create its own NATO and join it.

Wanting is not harmful (you even have the right), but who invites you?

Already in March, with the appointment of “effective managers” of Kolomoisky and Taruta (not the oligarchs of course), the Maidan was slapped. But the guys are not offended. In impotent weakness, they nodded their heads and agreed that there was no other way. They say there are different oligarchs. There are among them “good ones” (I think Kolomoisky’s conversations with the pranker have dispelled this misconception). The apotheosis of the fight against oligarchs was the election of Mr. Poroshenko to the office of president (not the poorest member of the society of revolutionary revolutionaries). I am silent about his promises to sell my business, etc. If people want to be cheated they will be cheated. And the Maidan in May wanted to be deceived. Because he already understood that he did not bring anything good to the country, and they were not taught to take responsibility for the “onizhedeti”. Therefore, with relief, they dropped all responsibility, forgetting the principles on ... the same oligarchs. Albeit on others. As it seemed.

And to talk about lawlessness during the regime of Yanukovich in Ukraine has become no longer fashionable and even funny.

This is a relatively new, but already discarded slogan. He appeared as a counterbalance to the Southeast movement. While there was hope for an easy punitive walk and all that was needed from the overwhelming majority of the population was just to send 5 hrn. via SMS slogan lived. And it was supported by all. I remember the first rally in Sumy (March 1) was released several thousand citizens. At the end of May, there were several dozen of them (if we discard the activists, whom I had already learned to recognize before this point). Now only media leaders and regime leaders, and in the meantime regional and everyday “separatism,” remind of a united Ukraine, as a result of a sharply deteriorating situation, covers regions and society. Just as they do not want to hear about it, and those thousands of deserters who have left the ranks of the punitive army. And volunteers to die for this idea according to the volunteers themselves - the cat wept. And this cat is crying less and less.

The country becomes ONE not from slogans, but from actions. Moreover, these actions should connect people, and not vice versa.


A year has passed

A year has passed. The country is destroyed. The war is coming. Ahead of the default and disaster. But it is not this that confuses the masters who created it. Consciously or not they were willing to make sacrifices. Although ... they agreed not on their victims, but on the victims of the people. True "forgot" the people immediately say about it.

They are embarrassed by the fact that there are no landmarks on which it is necessary to dub the crowds they fool. Any songs “La-la-la-la-la” and the slogans “Glory to Ukraine” are not pronounced on an empty stomach, they are not sung. And the other in their "zagashnik" apparently no longer exists. Songs and slogans ("La la la la", etc.) is all that remains of the ideals of the Maidan.

There is nowhere to strive (they don’t take it), the management betrayed (it was really not immediately clear), the order of the rows was broken (the rhino and the giraffe go together only for drinking), meaning life no one sees further maidan (although miserable appeals to help periodically are heard, but they have already become accustomed to not paying attention to it).

And only a year has passed.