K.Sokolov: “We do not just defend our land, but protect a healthy part of humanity” 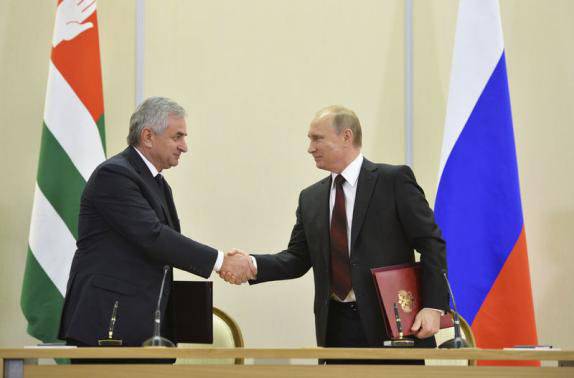 Fights, apparently, can not be avoided, and we must seriously prepare for it

In the framework of the meeting of the Presidents of Russia and Abkhazia Vladimir Putin and Raul Khadzhimba on November 24, the Treaty of Alliance and Strategic Partnership between our countries was signed.

According to media reports, the text of the document contains a number of points that actually work towards rapprochement between Russia and Abkhazia. Particularly noteworthy is the idea of ​​creating a joint group of forces and a focal point for the internal affairs bodies.

This step has already caused a painful reaction from official Tbilisi, which took the fact of the signing of the Treaty as a blow to the sovereignty of Georgia.

The document itself and the situation around it in an interview with the KM.RU portal are commented by Konstantin Sokolov, Vice-President of the Academy of Geopolitical Problems.

We are at a turning point, it is not possible to hush up the urgency

- The signed agreement between Russia and Abkhazia in the international legal respect is pure, legal, there is no doubt. Nevertheless, it is absolutely clear that it will cause a colossal storm of indignation in the information and political environment of the West. It was possible to help Abkhazia at the level of direct relations, there are other ways to help and support, without putting it into the form of a public international agreement.

Why was it done after all? How correct is this and what will it lead to?

We know that the annexation of Crimea to Russia was carried out in accordance with all legal procedures, but the attitude of the public in Ukraine and the West towards Russia has changed in a negative direction. The current treaty with Abkhazia will, practically, besides, add fuel to the fire. We are well aware of both the aggressive aspirations of the West and its henchmen in Ukraine towards Russia, and the aggressive aspirations of the Georgian leadership. It is clear that this is done for a reason, and in accordance with a clear plan, the essence of which is in the development of the conflict.

Historically, we have a lot to do with Abkhazia, including the experience of living within one state. Then the Georgian side practically began the genocide of the Abkhaz people, but we did not abandon Abkhazia. The same happened with the Crimea.

If we briefly describe the essence of what is happening now, then the fights, apparently, cannot be avoided and it is no longer possible to make concessions to the imposing aggressor. As far as the Russian leadership is ready to exacerbate the situation, we, as they say, will know from the fruits. It is necessary to prepare the country in the economic, moral, military and other spheres. We are at a turning point, the situation cannot be hushed up, and this agreement indicates that the conflict will grow in the very near future.

In the West, a doctrine was formulated, according to which Russia is the geographical axis stories

Russia is doing the right thing, which is developing investment projects in Abkhazia. At critical moments, the assistance provided is estimated not only by the amount of money, but also in the moral-psychological and political aspects. This is important for relations not only with the Abkhaz, but also with other peoples of the Caucasus. Here it is necessary not to count money, but a political effect. I think Moscow’s steps will be highly appreciated.

What are the prospects for us? And this is well known to us and the West. It was in the West that the doctrine was formulated long ago, according to which Russia is the geographical axis of history, the center of the world. He who dominates this center will dominate the world.

Now the task of seizing Russia by representatives of some world forces is being solved. We are not just defending our land, but protecting the entire healthy part of humanity, which has been threatened with the destruction of this world force.