November 25, 2014
16
The appearance of the so-called. micro and nanosatellites allowed many organizations to begin implementing their own space programs. Nevertheless, the cost of launching such devices still remains at a fairly high level, as a result of which there are regular proposals regarding new launch vehicles and methods of launching satellites into orbit. Recently, the Spanish company Celestia Aerospace announced the launch of its project, whose goal is to ensure a relatively simple and cheap launch of miniature spacecraft. 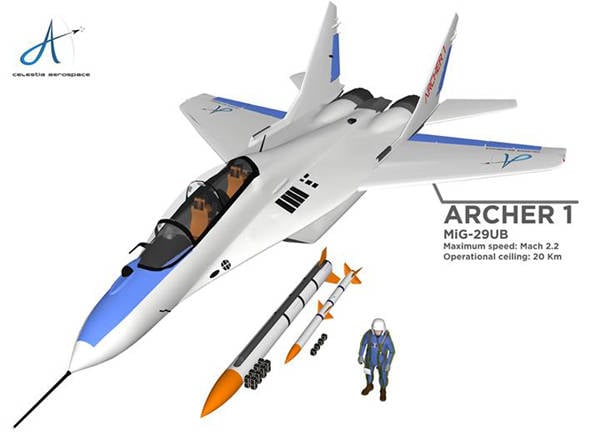 The project called SALS (Sagitarius Airborne Launch System - “Sagittarius Air Launch System”) implies the broadest use of existing developments and technology. It is assumed that such an approach to design will allow to maximally simplify the preparation for the launch of satellites, as well as provide the lowest possible cost. The exact cost of launching a single micro or nano-satellite has not yet been determined, but Spanish experts expect that the SALS system will be able to compete with the existing launch vehicles of light classes, which are currently used to launch small-sized spacecraft.

The SALS project is currently at the concept development stage. For the development of technical documentation in the near future it is planned to hire 40 specialists. Over the next five years, it is planned to expand the organization’s staff to 350 designers. It is noted that the company will primarily recruit young professionals who have recently graduated from universities.

Due to the relative complexity of rocket technology, Celestia Aerospace offers to launch spacecraft into orbit using a combined aerospace system. The complex SALS will include aircraft and launch vehicles of two types. Such a combination of carriers will significantly reduce the launch cost in comparison with the “classic” launch vehicles for satellite output.

Nanosatellites weighing up to 10 kg of a cubic shape with a face length of up to 10 inches (25,4 cm) are considered as the SALS payload. Depending on the type of launch vehicle used, simultaneously from 4 to 16 devices will be launched into orbit. 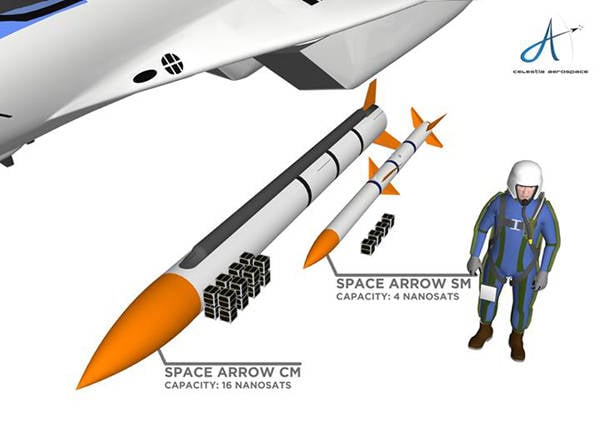 The largest component of the SALS complex should be the Archer 1 (“Archer-1”) aircraft. As a carrier, it is proposed to use a Soviet / Russian-made MiG-29UB fighter. From the plane will remove all weapon and part of military electronic equipment. In addition, it will be equipped with a set of equipment necessary to launch rockets with nanosatellites.

The immediate delivery of the payload to orbit will be carried out with the help of Space Arrow SM and Space Arrow CM ("Space Arrow") rockets. Solid propellant rockets will be developed on the basis of existing developments. The characteristics of these products will be such that the rockets will be able to rise to a sufficient height and drop the payload in the form of miniature satellites. The Space Arrow SM rocket will have smaller dimensions and will be able to carry four nanosatellites. The larger Space Arrow CM is intended for launching 16 devices into orbit.

According to Celestia Aerospace, the use of the SALS complex will be as follows. An Archer-1 airplane with a missile / missile under the wing will take off from an ordinary airfield and rise to an altitude of about 20 km. At a given height, the demilitarized fighter must launch a Space Arrow SM / CM rocket with a payload on board. Next, the rocket is due to its own solid-fuel engine (at the initial stage of flight), and then due to inertia it must reach an altitude of the order of 600 km. At this altitude it is supposed to produce the discharge of nanosatellites.

According to specialists, the Archer-1 will be able to carry four Space Arrow SM or one Space Arrow CM simultaneously. In both cases, the SALS complex will bring satellites into orbit up to 16. At the same time, depending on customer requirements, it is possible to simultaneously lift 16 devices to the same height (using a larger rocket), or to output satellites to different orbits (using Space Arrow SM). In the latter case, several missiles may be launched, each of which has its own flight program.

According to the authors of the project, the SALS system will have several beneficial differences from other means of launching small-sized spacecraft. Recall that at present such launches are mainly made with the help of “full-fledged” launch vehicles, the main load of which is a commercial satellite. Micro-and nanosatellites in this case are an additional burden to more fully utilize the capabilities of the rocket.

It is argued that the aerospace system SALS will provide a significantly lower launch cost compared to existing launch vehicles. The launch vehicle will be the only one-time component of the system, and the Archer-1 can be used tens or hundreds of times. Thus, the launch cost will consist of the cost of rocket assembly and aircraft maintenance. The possibility of simultaneous launching of several satellites should also reduce the cost of launching one apparatus into orbit. All this, as expected, will allow to achieve a price level that is attractive to potential customers.

When launching nanosatellites with the help of “traditional” launch vehicles, the customer has to wait for a place in the rocket from several months to several years. The use of a specialized aerospace system should reduce the waiting time to a few weeks. For example, launches can be carried out once every two weeks with small changes in a specific date in connection with the wishes of customers. Since nanosatellites are the main and only payload of the SALS system, the customer will be able to directly influence various launch parameters.

Celestia Aerospace is ready to offer customers not only a convenient means of launching spacecraft, but also some additional services. The MiG-29UB aircraft proposed for use, as a training machine, has two cockpits. For an additional fee, the customer will be able to personally attend the launch of the Cosmic Arrow rocket with its nanosatellite. In addition to the launch, the client will be able to see the planet from a height of 20 km. Such "tourism" has gained some distribution and can be of great interest both to participants in space programs and for ordinary fans aviation.

Currently, Spanish specialists are completing preliminary work on a new project. In the near future, the development of design documentation should begin. The first test launch of the Space Arrow rocket is scheduled for the beginning of 2016 of the year. According to current plans, launch vehicles will be manufactured at the company's site in Barcelona. The airport of Castellón (Valencia) is considered as a platform for flights.

In the future, Celestia Aerospace intends to gain a foothold in the nanosatellite market, having mastered several “specialties”. The company's maximum program is the development and production of nanosatellites for the order and their subsequent launch. Such a proposal should attract the attention of various organizations wishing to have their own miniature spacecraft.

The SALS project is at its earliest stages, but now it is of great interest both to potential customers and to the interested public. In the case of successful completion of the work, Celestia Aerospace will be one of the first organizations that managed not only to create, but also to bring to practical use a full-fledged aerospace launch system for spacecraft. In addition, SALS can become the first efficient complex of its class, designed specifically for launching nanosatellites. However, it is not yet possible to say with certainty that the Spanish engineers will be able to complete the new project. First news on the results of the work should appear in the very near future.