Ambiguous future of the Ukrainian Navy

November 25, 2014
69
One of the main News the last days concerning the armed forces of Ukraine, there have been rumors about the possible transformation of the naval forces of this country. It is reported that in the near future, the naval forces of Ukraine will be transformed into flotilla. In addition, the plans of the country's leadership include a reassignment of the new structure. There has not yet been official confirmation of this information, but a reaction has already appeared to such plans. 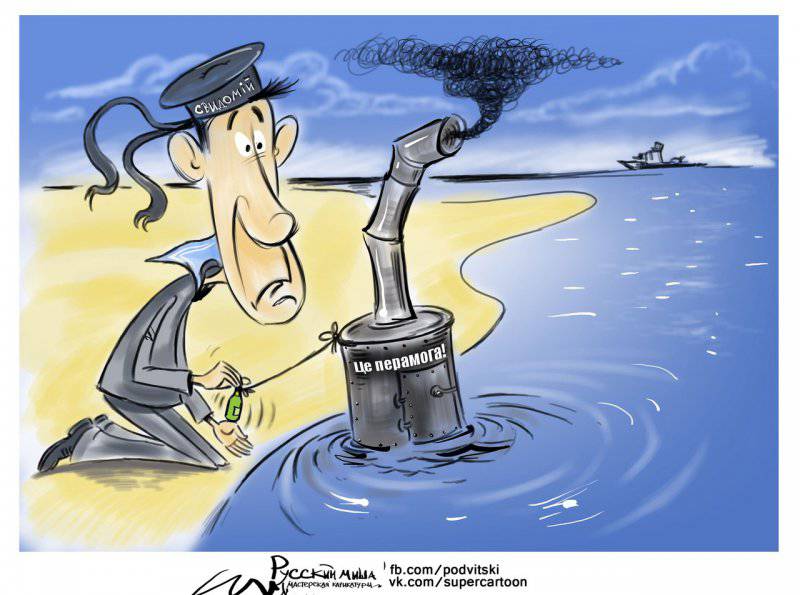 According to the Internet portal Blackseanews.net, a few days ago, a report on the transformation of naval forces was presented to the President of Ukraine, Petro Poroshenko. The document received the approval of the president and now has to become the basis for the relevant orders, which will be developed by the General Staff. The essence of the proposal made by the "land" generals without consulting with the sailors is the cardinal transformations of the Ukrainian Navy. It is proposed to convert this type of armed forces into a flotilla, which will be subordinate not to the General Staff, but to the Southern Operational Command.

At present, the remnants of the Ukrainian military fleet are based in Odessa, where a part of the ships that had previously served at the bases of the Crimea passed. Proceeding from the desire to optimize the deployment of various organs and structures of the armed forces, the authors of the “reform” propose to transfer a new flotilla to the city of Nikolaev. This is expected to free up buildings and objects in Odessa, transferred from this spring to the command of the naval forces. In these buildings it is supposed to place the Southern operational command of land forces.

The appearance of such information led to a corresponding response. For example, the author of the publication Blackseanews.net believes that optimizing the placement of fleet facilities is only a formal occasion. In fact, the sailors will be “exiled” to Nikolaev in order to free up space and land in Odessa. Odessa naval facilities are located in the city center, on the seashore, and for this reason they are of particular interest from a commercial point of view.

Against the background of the latest news concerning a number of specific features of the supply and financing of the Ukrainian Armed Forces, the assumption about the true goals of relocating ships and vessels looks quite plausible. In the current situation, everyone is trying, as they say, to snatch their piece, including at the cost of the combat capability of subunits or the lives of soldiers. Relocating the remnants of the naval forces in this case will be another attempt to earn at the expense of his position.

Several arguments can be made to justify the authors of the idea of ​​reforming and relocating the remnants of the Ukrainian Navy. So, the remaining ships can interfere with the work of the port of Odessa. Large volumes of various cargoes pass through the port of Odessa, which gives Ukraine a certain income. Naval ships take up positions in the port and thus to some extent impede its operation. Thus, it really makes sense to free the berths necessary for the port and transfer the ships and vessels of the fleet to another place.

The port of the city of Nikolaev is proposed as a new base for the flotilla of Ukraine. Such a choice of a new base has both negative and positive features, but their ratio is clearly not in favor of the latter. After the loss of Crimea, Ukrainian ships can be based only in a few ports. At the same time, the port of Odessa is planned to be freed from warships. Mariupol is located on the shores of the Azov Sea, and in addition, it is located dangerously close to the combat zone. As a result, Nikolaev is the only port capable of receiving ships of the new flotilla.

Nikolaev, as a base for a military flotilla, also has serious shortcomings, primarily related to its geographic location. To get from the base to the Black Sea, ships will have to walk several tens of kilometers along the Southern Bug River. Such an arrangement of the city did not prevent the construction of various ships and vessels, but it could seriously complicate the full operation of warships. As a result, Nikolaev turns out to be one of several ambiguous options that have a specific combination of advantages and disadvantages.

The proposal to reorganize the naval forces into a flotilla has a certain meaning, although it looks extremely strange or even offensive to Ukrainian sailors. After the spring events in the composition of the Ukrainian Navy, only seven warships and boats remained. These are the frigate “Getman Sagaydachny”, the landing ship “Kirovograd”, the corvette “Vinnitsa”, the missile boat “Priluki”, the artillery boat “Skadovsk”, the minesweeper “Genichesk” and the control ship “Donbass”. In addition, Ukraine has several auxiliary vessels of different types. Some of the equipment, including eight combat boats and ships, as well as the submarine "Zaporozhye", remains in the Crimea and has not yet been transferred to Ukraine due to recent events.

In its present state, the naval forces of Ukraine are more like a squadron or flotilla assembled from disparate ships. Naturally, this composition affects the combat effectiveness of the remnants of the Navy. In fact, the remaining seven ships and boats simply can not protect the Ukrainian coast from possible threats. It should be noted, and under the previous authorities, the Ukrainian Navy did not constitute a serious force, however, after the loss of the Crimea and some ships, this type of armed forces almost completely lost the remnants of its combat potential. Given the current state of the naval forces, renaming them into a flotilla looks like a rather logical step, reflecting the real state of affairs.

It hardly makes sense to expect that in the near future Ukraine will be able to restore its navy even to the state it had in previous years. The new authorities plan to develop the armed forces, but the economic crisis in the country imposes serious restrictions on the implementation of such plans. In addition, the Ukrainian leadership has specific views on the development of the naval forces.

At the end of October, Ukrainian President P. Poroshenko said that the modernization of existing ships and vessels is a more effective undertaking than the construction of new ones. At the same time, the great importance of the return of ships remaining at the Crimean bases is noted. As a result, it turns out that, having made every effort, Ukraine will only be able to restore its naval forces in the pre-crisis state. Visible modernization of the fleet is simply not capable of the country.

It is already clear that in the next few years, the Ukrainian defense industry will be forced to maintain the condition of existing ships and vessels, without being able to seriously start building new ones. The likelihood of the implementation of existing plans, including already started projects, is extremely small.

In the middle of November, it became known about the resumption of construction of the head corvette of the 58250 “Haiduk” project. This ship was laid at the Black Sea Shipbuilding Plant (Nikolaev) in May 2011, but so far only 43% of works have been completed. Due to limited financial possibilities, construction was carried out with different intensity. In the summer of this year in order to save work were suspended. Now, as it turned out, construction resumed. Corvette "Vladimir the Great" was planned to pass in 2015-16, but the real surrender will occur much later.

Until the end of next year, the Kiev plant "Leninskaya smithy" should build two artillery boats of the type "Gyurza". The corresponding contract was signed in October. It is argued that the new boats can be used to solve problems on rivers and at sea. It is noteworthy that earlier it was planned to build several Gyurza boats, but the execution of this order failed for several reasons.

As we see, in the coming years Ukrainian shipbuilding will be able to build only relatively small boats. A more serious technique is not yet capable of him, primarily because of the limited capabilities and the difficult economic situation of the customer in the person of the Ministry of Defense. According to the author of the publication on the website Blackseanews.net, help from foreign countries could be a way out.

“Friends and allies” of Ukraine have on conservation a sufficiently large number of ships of various types. This is not a new, but still usable technique. Cruisers, destroyers, frigates, etc. could be the subject of an agreement like the Lend-Lease of the Second World War. Nevertheless, according to the publication, the Ukrainian leadership did not include warships in the list of equipment and weapons, which is planned to be requested from the United States.

Official Kiev has not yet commented on the information that has appeared about the upcoming transformations of the Ukrainian naval forces. Perhaps the first official message on this topic will be the publication of the relevant presidential decree, which the Navy will be transformed into a military flotilla, and the main point of basing will be Nikolaev. What exactly will be the fate of the Ukrainian Navy - time will tell. But it is already clear that the Ukrainian fleet, like other types of armed forces, is waiting for a sad future.