For the Western elite, there is no law, no honor, no conscience 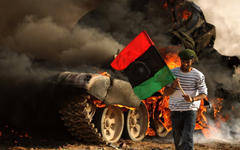 Millions who believe that they are “theirs” for the West will be thrown in the most cynical way.


I'm not going to comment at all on the heavy nonsense about Libya, which today comes from all screens and rushes from all microphones. It is already clear that the ground operation of NATO has actually begun there, that the forces controlled by NATO are committing massacres and are committing genocide against the civilian population, that the pictures that are transmitted by the so-called “News agencies” are almost completely staged and have no relation to reality, and so on, and so on. In the end, you can find the truth about the events in Libya on the Internet. I want to dwell on a completely different circumstance.

Events in Libya showed that today, after the liquidation of an alternative global project, the elite of the Western project has no law, no honor, no conscience (conscience, however, they never had, this is the specificity of this project). More precisely, it acts only for "its", which is becoming less and less. And here the fundamental question arises: why do all participants in economic activity believe that they are waiting for a different fate than the citizens of Libya?

Because they used to live well? Well, the people of Libya are also used to it - they will now wean, and it is unlikely that happiness will come back during the current generation. NATO is unlikely to stop: to kill Gaddafi and destroy the memory of all his positive actions is now a matter of life or death for them, and the potentials of Libya and NATO are incommensurable. And those killed and wounded, who cannot be hidden, will be written off against Afghanistan, Iraq or a couple of aviation accidents.

Because they are “theirs”? And why, in fact, did they get it? Emigrants from Africa and Asia, too, rushed to Europe to be recorded in "their". Today it is almost clear that things will end badly for them: in many European countries, the return of extreme nationalism is almost inevitable, perhaps in the form of fascism. In the end, in the 1930's. from the Baltic to the Black Sea in Europe was fascism, it fits well with the “European values”, and the economic crisis will now be stronger than when unemployment reached a measly 40% of the active population.

Maybe many businessmen, “winners” who have “made themselves” over the last 30 years, due to the fact that they have got access to the issue money for the right behavior and personal activity, they think that they are “their own”? But here the economy is already beginning. The share of the financial sector in the world economy before the Second World War was no more than 10%, by 1970. she rose to 20%. And today, the financial sector is redistributing to its own advantage up to 70% of the profits generated in the economy, and the economy itself has grown two times since then. This means that, in absolute terms, the financial sector (in which or through which the states of the last decade were mainly created) should be reduced by an order, relatively - times in 3-4. This means that the total number of the rich in the world will be reduced several times, or, in other words, three of the four present "their" rich will become poor. And the question is: will it be those people who “took place” in recent decades, or those whose riches come from previous centuries?

Let's translate everything said into Russian again. The very notion of “friend or foe” in the near future, within the framework of the Western global project itself, will fundamentally change, and in favor of a sharp (at times!) Reduction in the number of these “people”. And no one will explain to them: they say, take the currency, keep yourself quiet and go, get coupons for free soup for yourself and the whole family, because whoever does not have time will be late and will starve. No, it will be different. Respected and worthy news agencies and consultants will begin to explain to them that the Libyan rebels have already captured Tripoli ... oh, i.e., that a boom is starting in the new "femtotechnological" industry, and all the money needs to be urgently invested there, because the future is there. And the money will suddenly disappear ... Or else, that the state of the banking system in a particular country is not just good, but “just vasche”, and then the banks will begin to crumble there, along with the money of naive citizens who will be absolutely sincerely surprised: they are “theirs” ... And some will even begin to sue, sincerely believing that they are honest somewhere in London. Between "my" - maybe I did not try (and I can’t, because for them I’m certainly not "my"), but between "my" and "strangers" ... Well, try today Gaddafi to sue for completely shameless confiscation his assets ...

I will repeat it again, since this topic is not just important, but very important. For many decades, while the “Western” global project was expanding, he could afford the expansion of his elite at the expense of “allowed” to the money, which created (including through the work of the most powerful propaganda machine) the feeling that they were “ their". Now everything has changed, and all these people (millions of people!) Will be most cynically thrown. Moreover, the same propaganda machine will explain to them that this is not the result of a deliberate policy, but their personal problems related to the fact that they suddenly and unexpectedly became “losers”. Apparently, they dreamed a bad dream, or ate something ...

I propose to consider this text as a warning to those who have considered their lives in recent decades successful. Compare your life with the lives of Libyan citizens, who also believed that oil is their common, and they own the appropriate part of the proceeds from this oil. So: the same thing awaits you, and in the very near future. And if you do not want to become a victim of various troubles, you need to act now. And do not say later that you did not warn!

We are in Yandex Zen
About Stalin and Khrushchev
What you didn't want to know about England
11 comments
Information
Dear reader, to leave comments on the publication, you must to register.