Nobel Prize for the radar for the F-35 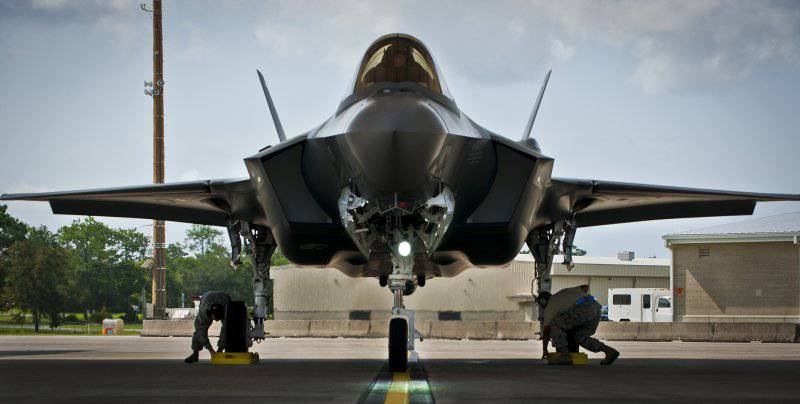 The airborne radar mass is 1% of the take-off mass, but it is the radar characteristics that determine the capabilities of modern fighters. The combat use statistics for the last 15 years gives a clear picture: all the air battles in which fourth-generation fighters took part took place over long distances (100% of victories were won using medium-range and long-range air-to-air missiles).

The radar is the main element of the aircraft sighting and navigation system. Modern multi-functional stations provide effective search, detection and tracking of air and ground targets, remotely program the autopilots of the launched rockets, measure the altitude and allow mapping the terrain. The most "advanced" samples are used as transmitters in high-speed data exchange systems, perform the functions of EW and RTR facilities - up to the implementation of the "beam" principle weapons!

The basis of modern radar systems are three major technologies:

Radar with phased antenna array (PAR). The use of a group of antenna emitters (instead of a single “plate”) made it possible to realize a whole range of advantages, the main of which was a quick scan of a selected area of ​​space (within a 1 millisecond). Electronic beam control eliminated the cumbersome drives and cardan suspensions required for mechanical control of conventional antennas. Efficiency. Reliability. Multifunctional. The best sensitivity and noise immunity. 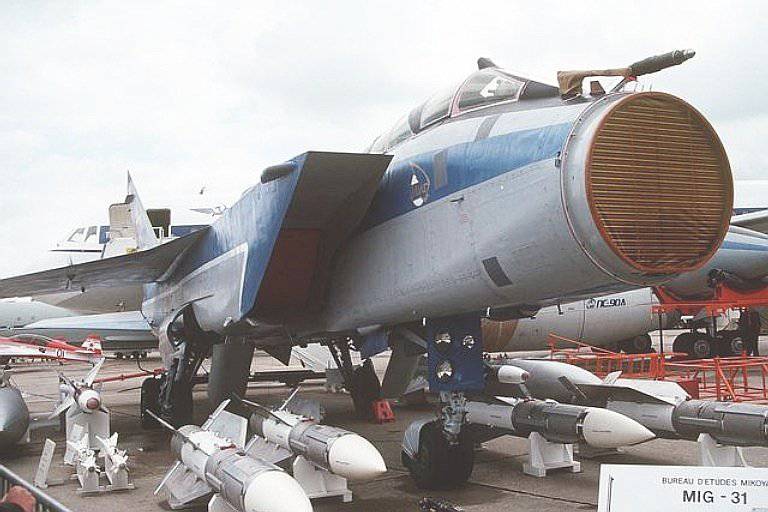 Aperture synthesis technology. The aperture (linear size of the antenna) determines the width of the radiation pattern (beam width). To obtain high azimuth resolution, antennas with as large aperture as possible are necessary, while the fighter antenna radar dimensions cannot exceed the 1,5 meter.

Synthesized (artificial) aperture is a technique based on the sequential reception of signals at different positions of a real antenna in space. For that split second, while the radar pulse lasted, the plane managed to fly 10 meters. As a result, the illusion of a huge antenna with an aperture of 10 meters was created! 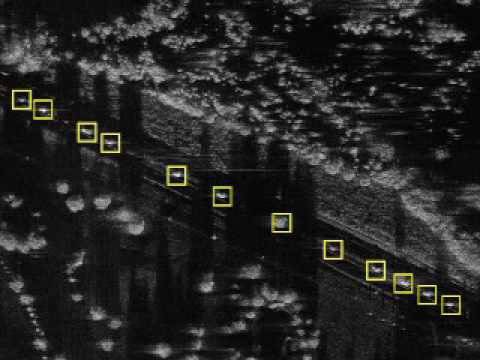 The appearance of synthetic aperture radar has allowed the review and mapping of the earth's surface with a resolution comparable to the quality of aerial photographs. Modern fighter-bombers got unique opportunities for attacking ground targets - in any weather and time of day, from a great distance, without entering the zone of action of enemy air defense. 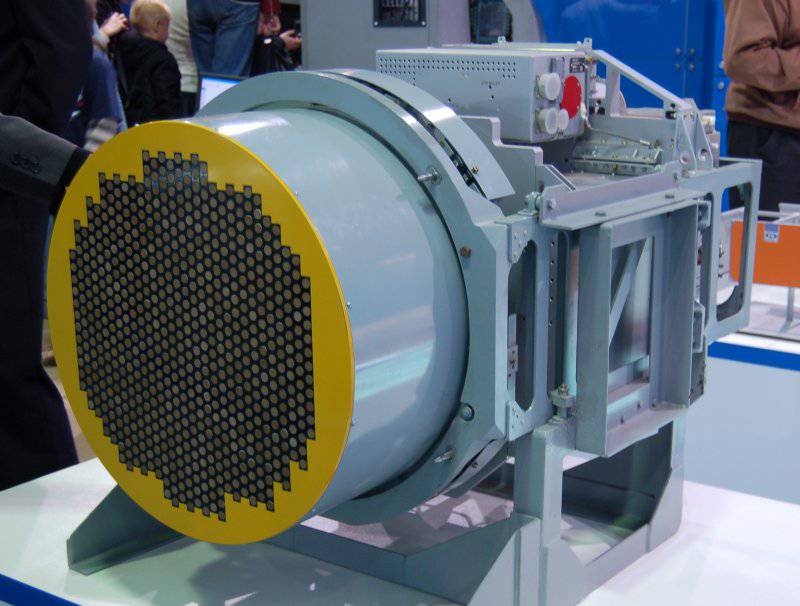 An array of thousands of individual receiving-transmitting modules (MRP) that do not need a single high-power radiator. The advantages of the technology are obvious:

- smaller mass dimensions: due to the smaller dimensions of the antenna itself, the absence of a high-power lamp and the associated cooling system and high-voltage power supply unit; 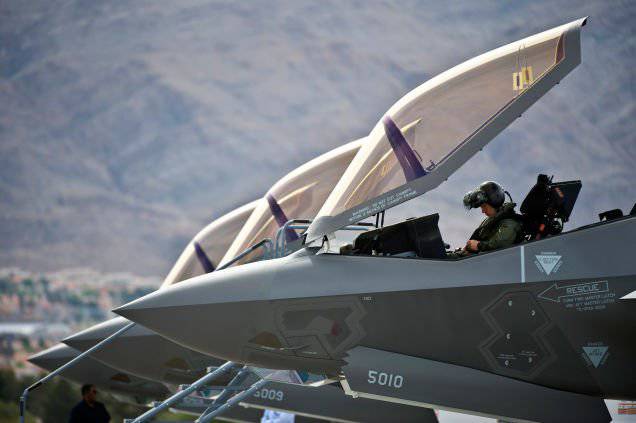 - increased reliability: failure / damage of one element will not lead to loss of performance of the entire radar (however, the presence of a complex cooling system of thousands of AFAR modules largely eliminates this advantage);

- high sensitivity and resolution, the ability to scale and work in the "magnifying glass" (ideal for work "on the ground");

- due to the large number of AFAR transmitters, there is a greater range of angles to which rays can be deflected - many of the limitations of the geometry of the arrays characteristic of PARs are removed;

- high transmitting capacity of AFAR allowed to integrate it into the communication and data exchange system:
In 2007, the Northrop Grumman, Lockheed Martin and L-3 Communications tests enabled the Raptor Fighter AFAR to operate as a Wi-Fi access point, transmitting data at 548 speeds in megabits per second, which is 500 times faster than the standard 16 NATO link . 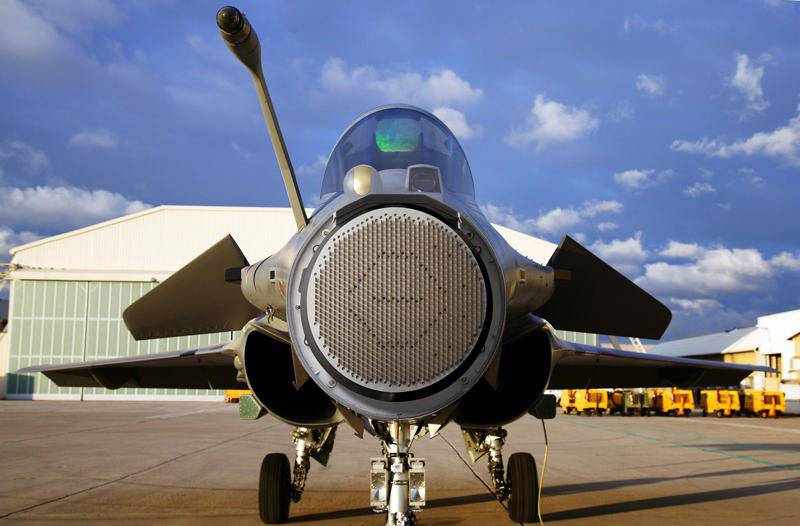 Among them: the French "Rafale" (radar RBE-2AA), export F-16E / F "Desert Falcon" air force UAE (these fighters are equipped with radar AN / APG-80), export fighter-bomber F-15SG military Singapore Air Force (equipped with AN / APG-63 (V) 3), while American Strike Needles are also being upgraded with the installation of AN / APG-82 (V) 2 radars. In addition to them, the radar with AFAR AN / APG-79 received upgraded deck F / A-18E / F "Super Hornet".

All of these radar models for 4 + fighter generation represent the evolution stages of conventional radars. For example, the APG-63 (V) 3 and APG-82 (V) 2 are improvisations based on the old APG-63 radar of the F-15 fighter. Therefore, despite the new antenna and updated processor, the end result was not very impressive.

The APG-79 shows a slight increase in performance compared to the APG-73. The results of practical tests did not reveal any noticeable advantages of F / A-18E / F fighter jets, equipped with AFAR radars, before vehicles with conventional radar radars.
From Director of Test & Evaluation (DOT & E), 2013.

This is despite the fact that the cost of the new radar increased markedly. Even in the era of digital technology, when the cost of production of each AFAR module has decreased to several thousand dollars, the final cost of the grid of thousands of APM is many millions. Of course, the price is not an argument for the United Arab Emirates, where the sheikhs wanted to equip their F-16 fighter jets with as steep radar as possible. 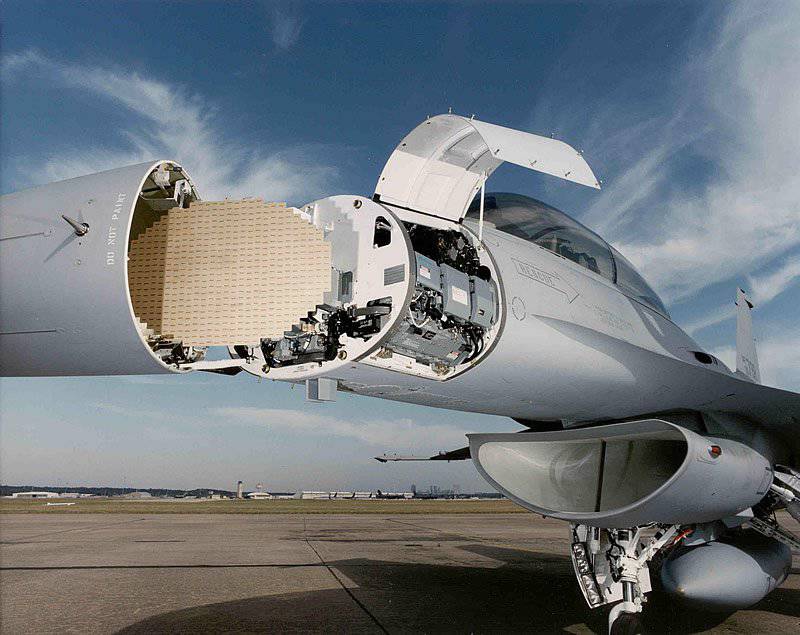 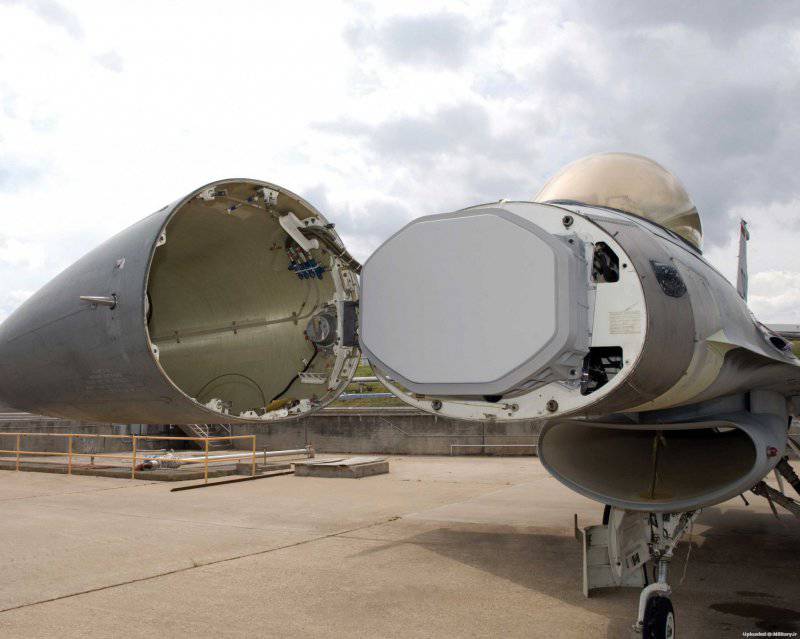 Well, while the "majors" are having fun with their "toys", real work is in full swing in serious scientific centers.

The teams that worked on avionics for the F-22 and F-35 fighters achieved the greatest success in creating radars with active phased arrays. For these machines, radar stations of a new generation were created, where large computational capacities allowed realizing the full potential of AFAR technology.

F-22 and its AN / APG-77 radar
What can the radar of the Raptor fighter from what the radar radars of other airplanes do not?

At first glance, nothing special. According to the military directory "Jane", the radar "Raptor" has a working detection range of 193 km, which provides 86% target detection probability with EPR = 1 square. m. on one pass of the antenna beam. For comparison: the domestic radar H035 "Irbis", according to the developers, sees air targets at a distance of 300-400 km (EPR = 3 sq. M.). By and large, these values ​​should not be taken seriously - in combat conditions, under the influence of various hindrances and situational limitations, the actual detection range will decrease by several times. As for the energy potential, AFAR, with all its advantages, has greater energy dissipation and lower efficiency, compared with PPAR.

Theoretically, this could equalize the chances of “Raptor” and Su-35. But it is worth remembering that the mutual detection range in an air battle depends not only on the energy capabilities of the radar and the EPR air target.

Radar "Raptor" has a special mode of operation LPI (low probability of interception), which is especially important for the aircraft, built on technology "stealth". Unlike conventional radars, the Raptor emits low-energy pulses in a wide frequency range. This eliminates the effectiveness of enemy EW and RTR equipment - the enemy does not even know that F-22 is close and has already launched an attack. The only one who is able to understand the random flow of signals at different frequencies is the AN / APG-77 radar processor itself, which gradually accumulates data and, according to the theory of probability, finds the true position of the target.

The second most important advantage of the “Raptor” radar is the possibility of simultaneous operation in the air-to-air and air-to-surface modes. It is difficult to overestimate the importance of this moment for pilots of fighter-bombers that are searching in relief folds tank enemy columns in the presence of a threat from the enemy aviation.

According to common data, AN / APG-77 with synthetic aperture allows detecting targets with 30 EPR square meters. m. (tank) at a distance of 50 km, and a bridge or a large ship (1000 sq. m.) at a distance of up to 400 km! However, do not forget that the max. The resolution of the radar is not achieved in the entire sector of the review, but only in the form of a narrow “searchlight” beam. In addition, high-resolution mapping imposes certain restrictions on the flight profile and is possible only in the absence of active opposition from the enemy’s aviation and air defense.

In addition to the functions of detection tools, AFAR, in theory, is capable of itself turning into a formidable weapon. By focusing radiation in the form of narrow “death rays,” such a radar can “burn” the electronics of incoming enemy missiles. What would be the real effectiveness of the Raptor radar as an electromagnetic weapon, the question is complex. Nevertheless, the topic has gone beyond the secret laboratories and is now being actively discussed in the circle of aviation specialists.

It remains to add that, in addition to the sci-fi properties, AN / APG-77 has all the usual advantages of the AFAR technology: relative compactness and increased reliability. The use of radar with AFAR, it is not strange, had a positive effect on the reduction of the EPR of the Raptor itself (due to the absence of mechanical drives and mirror surfaces under the nose fairing + reduction of the size of the nose). Starting with the "32 Block" version, APG-77 has been able to make directed radio-electronic interference, including for several targets simultaneously. Finally, do not forget about the potential possibility of integrating radar into high-speed data exchange networks.

The conclusion is obvious: with all its limitations and shortcomings (the main of which is cost!), The AN / APG-77 system represents a real breakthrough in the field of radar. Pledged potential is so high that even after two decades, the radar continues to bring surprises and open up new opportunities.

Even greater success was achieved by the scientific team that created the radar for the multipurpose F-35 fighter. The academic community is convinced that the developers of the system, which received the designation AN / APG-81, could seriously claim the Nobel Prize in Physics - and, possibly, will receive their award when their designs lose their secrecy. 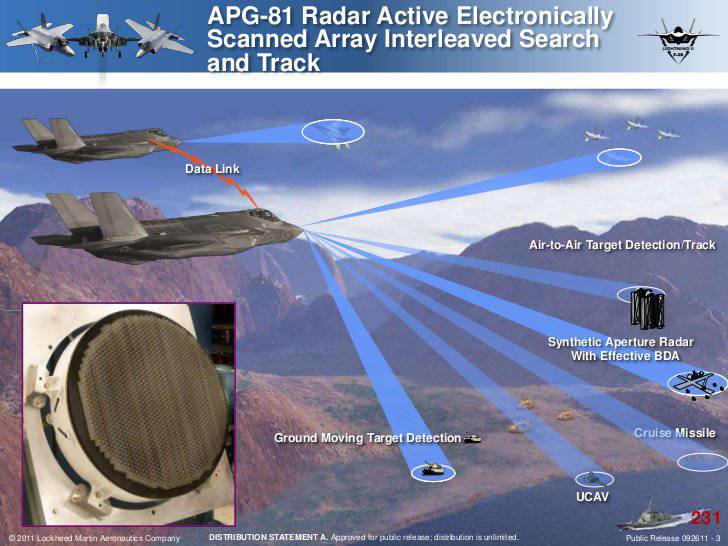 In comparison with the powerful radar "Raptor" the APG-81 radio-electronic miracle has modest dimensions and less energy potential. Nevertheless, it provides the pilot with almost a large amount of information. It's all about the unique mathematical signal processing algorithms: for example, extracting useful information from the noise reflected from the "side lobes" AFAR.

But the main features of the F-35 radar are revealed when working on ground targets: the creators of the APG-81 with incomprehensible images managed to achieve a min. permits on the ground within 30 x 30 centimeters. This allows, literally, when viewed from stratospheric heights, to distinguish a tank from a BMP! 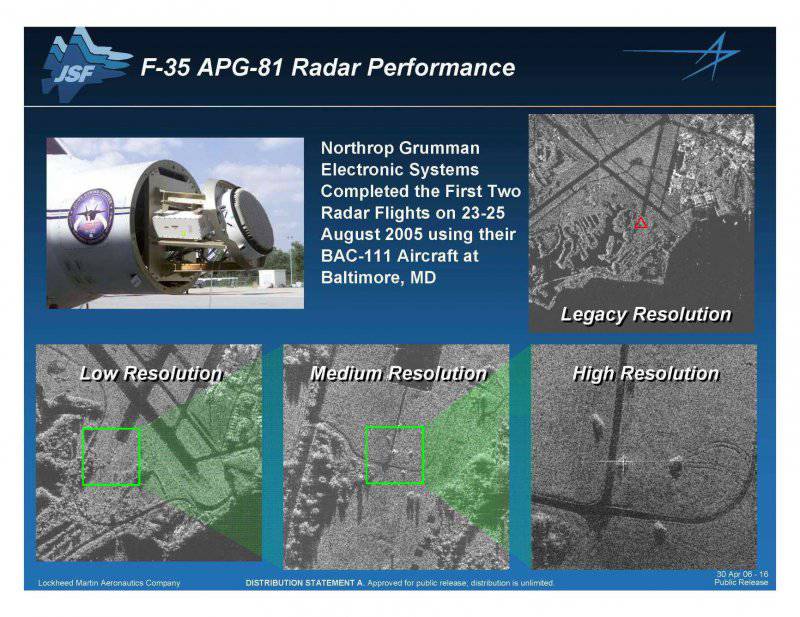 If earlier there was only a mark on the screen, nowadays the software and the hardware capabilities of the radar station allow us to reconstruct the appearance of the target.

What awaits us in the near future? The main development trend is already known today - the creation of a mathematical apparatus for a three-dimensional model of radar.